Game of the Day: Oklahoma City Thunder at Phoenix Suns

This game has the highest Vegas total of the slate despite both the Thunder and Suns playing on the second leg of a back-to-back.

Russell Westbrook remains the highest-priced player in the slate at $13,100 DK and $13,000 FD. Those salaries seem ridiculous, but they’re probably still not high enough:

Westbrook has exceeded salary-based expectations in nine of his last 10 games, averaging a stupid +7.14 FD Plus/Minus over that time despite the high price tags. He took 36 shots last night, and NBA writer Mike Gallagher tweeted out this nugget:

The Suns rank third in pace, averaging 102.0 possessions per 48 minutes, and 27th in defensive efficiency, allowing 109.1 points per 100 possessions. In his first two meetings with the Suns this season, he was on point (per our Trends tool):

His (Le’Ve)ownership will be high. [Editor’s Note: That one was for the NFL fans.]

Victor Oladipo‘s status for tonight is unclear, but he did not travel with the team last night for the game against Portland and has missed four consecutive games now with back spasms. Enes Kanter has returned from a forearm injury, and he’s exceeded salary-based expectations in his last three games, getting up to 28 minutes last night.

He remains affordable at only $5,400 on DraftKings, where he has an 86 percent Bargain Rating and eight Pro Trends (accessible to Pro users in our Player Models). Steven Adams is the same price on DK, but he played only 23.8 minutes last night and scored just 10.0 DK points against the Blazers. Newly-acquired Taj Gibson got significant run instead and finished with 33.0 DK points in 32.7 minutes in what was easily his best game as a Thunder. (Can you be a Thunder?) [Editor’s Note: “You”? No. “Taj Gibson”? Yes.]

Most of the Suns really struggled in the first two meetings with the Thunder this season: 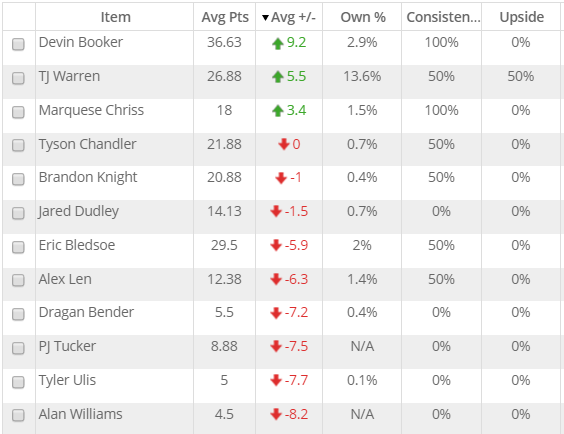 Devin Booker has found quite a bit of success against the Thunder, but he’s struggled lately, averaging a -0.98 FD Plus/Minus over his last 10 games:

Still, he’s a value at $6,200 on FD, where he has 11 Pro Trends and a 95 percent Bargain Rating, and he easily has the best matchup against Alex Abrines, who is not exactly a plus defender (per our Matchups tool). 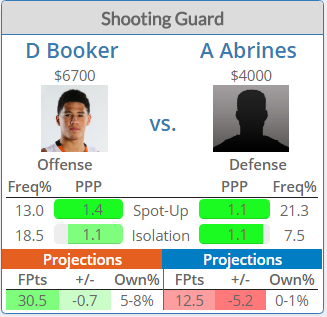 T.J. Warren has the exact opposite situation: He’s been excellent lately . . .

. . . but he will be guarded by Andre Roberson, who ranks seventh out of all SFs on the year with a +2.14 Defensive Real Plus-Minus (DRPM) mark.

Eric Bledsoe is playable only in guaranteed prize pools because of his slump — he played only 25.0 minutes last night against the Hornets — and Alan Williams continues to be intriguing, especially on DK, where he’s averaging a ridiculous 1.30 fantasy points per minute on the year and has an 86 percent Bargain Rating.

D’Angelo Russell will face Isaiah Thomas tonight, who ranks literally last among all NBA players this season with a -4.46 DRPM. 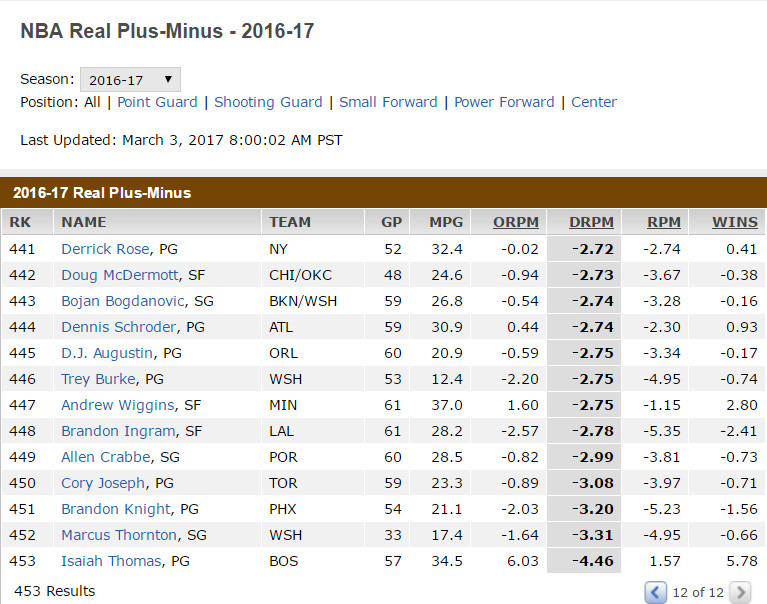 Russell is frustrating to roster only because of his volatile minute load . . . 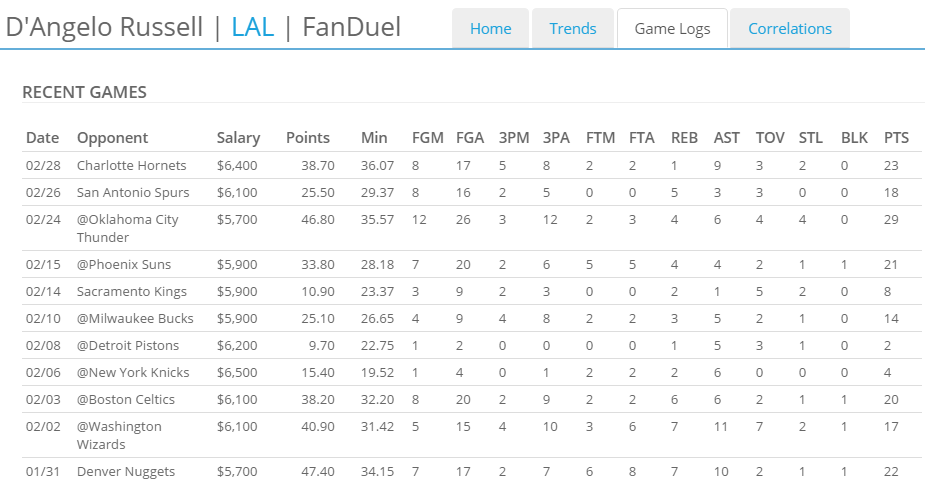 . . . but he seems to be back in coach Luke Walton’s good graces currently. He has a large +3.22 FD Opponent Plus/Minus tonight against the Celtics, who have struggled to defend point guards all year because of Thomas’ size on the perimeter. At $6,400 on FD — where he has 10 Pro Trends and a 95 percent Bargain Rating — Russell will be a popular option in all contest formats. (Pro users should be sure to check Russell’s ownership in our DFS Ownership Dashboard as soon as lineups lock.)

And don’t forget about Thomas, who is expensive but gets a Lakers squad that ranks seventh in pace, averaging 100.6 possessions/48, and 29th in defensive efficiency, allowing 110.4 points/100.

Cory Joseph (-3.08 DRPM) and Dennis Schroder (-2.74) have been incredibly poor this year — and that’s good for John Wall and Kyrie Irving, both of whom failed to meet salary-based expectations last game. Wall played these very Raptors on Wednesday up in Toronto and finished with only 39.0 DK points on 12 real points. That said, it was the second leg of a brutal back-to-back against the Warriors and Raptors, and he hasn’t been great in away B2Bs . . . 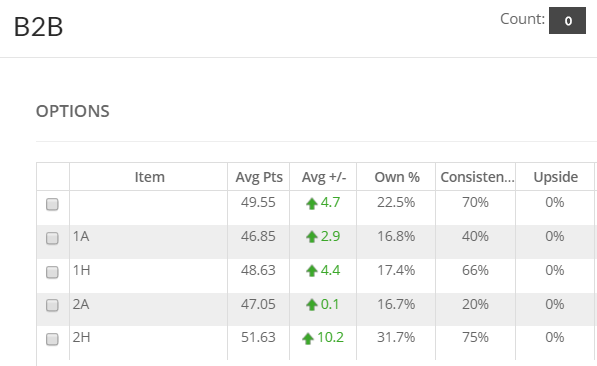 He’s back home and rested tonight.

Kyrie played well on Wednesday in Boston, scoring 28 real points on only 19 shots. However, he missed salary-based expectations on DK by 5.15 fantasy points because of his poor peripheral stats: After dishing out at least six dimes in each of his last five games, he finished with only one assist against the Celtics. Still, he’s been very consistent lately, exceeding value in seven of his last 10 games and averaging a +2.83 DK Plus/Minus during that span.

After crushing in the first couple of games since Kyle Lowry‘s injury, DeMar DeRozan finally had a bad game on Wednesday, scoring just 31.0 DK points in 33.7 minutes and shooting just 7-of-20.

Still, the usage is certainly there sans his All-Star backcourt mate: DeRozan has used a ridiculous 40.3 percent of the Raptors’ possessions in the five games without Lowry this year. 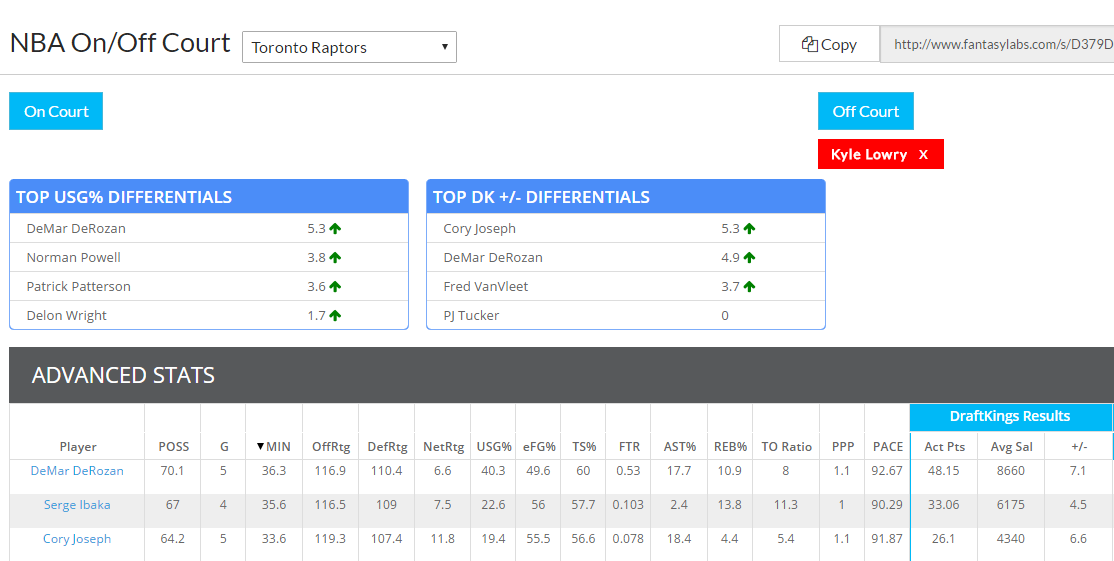 He has averaged 48.2 DK points and a +7.1 Plus/Minus in those contests, and that includes Wednesday’s dud. It may not be a coincidence that he struggled against Washington, who ranks ninth in defensive efficiency on the year, but that amount of usage his hard to ignore, and he’s still very affordable at $8,900 on DK, where he has 10 Pro Trends and a 98 percent Bargain Rating.

The shooting guard spot is absolutely brutal today: Of the 40 FD SGs currently in our Player Models, only 10 are projected to be near 30-plus minutes and most of them (Seth Curry versus the Grizzlies, for example) are in awful spots. Marcus Smart isn’t a sexy play by any means, but he is 1) projected to play 30 minutes, and 2) in a nice matchup against the Lakers, who rank 29th in defensive efficiency. He has shown a GPP-worthy ceiling of late — he put up 46.5 DK points six games ago in a similar matchup against the 76ers — and he’s definitely affordable at $5,000 on FD, where he has a 90 percent Bargain Rating. Avery Bradley is back, but Smart is still seeing 30 minutes and played well against the Lakers in their first meeting:

And I don’t want to go here, but I guess Nik Stauskas and Alec Burks have to be at least considered given their current roles and low price points and the general ugliness of the SG position today. Stauskas is averaging a putrid 0.66 DK points per minute on the year, but he started the second half on Wednesday after Gerald Henderson injured his hip and will likely get the starting nod tonight. The Knicks rank 25th in defensive efficiency, allowing 108.5 points/100. Burks also has a great matchup against the Nets, who rank first in pace, averaging 103.8 possessions/48, and 28th in defensive efficiency, allowing 109.3 points/100. He played nearly 28 minutes on Wednesday sans Rodney Hood, who has been ruled out tonight as well. He remains the absolute minimum on DK at $3,000, and 20-25 minutes may be all he needs to hit value against a poor Nets team.

. . . despite dealing with sickness and needing rest for the playoffs. He is pretty much always excellent, but he’s been especially so this season against his biggest competition in the East: The Hawks, Celtics, Raptors, and Wizards, who occupy the four spots directly below the Cavs in the playoff race.

If you want to pivot down a little bit, Gordon Hayward has exceeded salary-based expectations in seven of his last 10 outings and averaged a +3.06 FD Plus/Minus during that time.

He has increased his usage rate by 2.2 percentage points with Hood off the floor this season . . .

. . . and he faces a Brooklyn team that is simultaneously fast-paced and awful defensively. Hayward is also certainly better as a favorite this year:

And just below him sits Robert Covington, who continues to play excellent basketball of late:

He has exceeded salary-based expectations in eight of his last 10 games and averaged an impressive +7.46 Plus/Minus during that time. In the four games since Nerlens Noel and Ersan Ilyasova were traded (and Joel Embiid has been injured), Covington has led the team with 40.6 DK points and an +8.6 Plus/Minus in 34.8 minutes of action. The 76ers are playing very fast — they’re averaging 101.9 possessions/48 with Covington on the floor during that time — and he has posted a 62.7 percent true shooting mark. 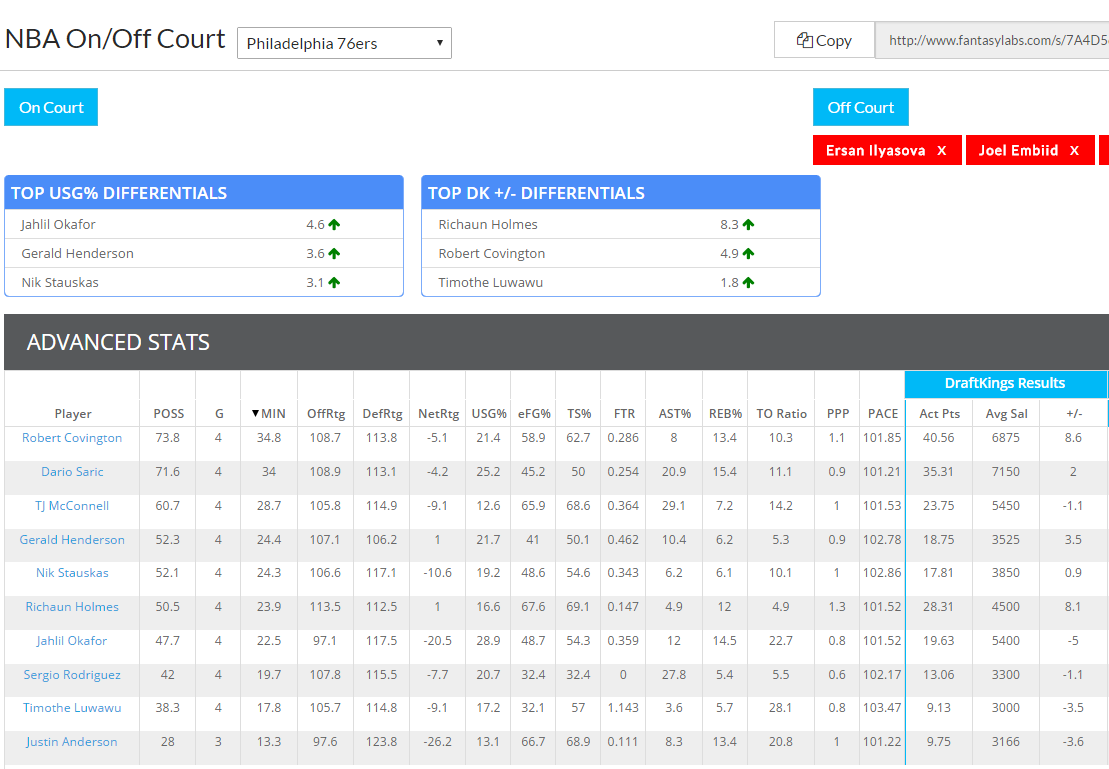 Blake Griffin put up a dud on Wednesday, scoring only 28.5 DK points in 34.6 minutes of action against a fast-paced Houston team that has struggled all year to defend big men. He will certainly have a chance to rebound from that performance tonight against a Bucks team that ranks 22nd in defensive efficiency, allowing 107.0 points/100 on the year, and 22nd in rebound rate, grabbing only 49.1 percent of the available boards. Thon Maker has a lot of defensive potential, but he is not a great rim protector currently:

Another 76er? Why not? Dario Saric finally put up a dud on Wednesday, scoring only 17.2 FD points in 28.2 minutes of action against the Heat. Still, he’s been perfect in the past 10 games outside of that, and even with the dud he’s averaging a silly +11.31 Plus/Minus:

. . . we see that Saric has averaged 35.3 DK points in 34.0 minutes per game over the last four games. New York has been the third-worst team in the league against opposing PFs this year:

Saric remains in play in all contest formats, especially on FD, where his $7,300 salary comes with 11 Pro Trends, an 81 percent Bargain Rating, and a +2.36 Opponent Plus/Minus.

By the way, you’ve probably noticed that I’ve talked about Bargain Ratings a lot lately. That’s because later in the season, when pricing is tighter and players are sharper, identifying pricing discrepancies across sites is even more important:

Those are the Plus/Minus numbers for players with 90-100 percent Bargain Ratings on FD.

Anyway, back to power forwards: Kristaps Porzingis remains cheap on both sites at $6,600 DK and $6,700 FD, and he’s coming off a nice game in which he scored 20 real points and grabbed nine boards while actually starting at center with Willy Hernangomez and Joakim Noah both out. It’s currently unclear whether that will happen again or if Kyle O’Quinn will move back into the starting rotation, but Porzingis should get his touches regardless. We currently have him projected to start at center, which means he’ll go up against Jahlil Okafor and this defense . . .

The Jazz will certainly be a popular team to target tonight, as they face an awful Brooklyn team. Rudy Gobert struggled on Wednesday against the Wolves, scoring only 19.6 FD points in just 21.2 minutes of action. That said, he now gets a Nets team that ranks 27th in rebound rate, grabbing only 48.0 percent of the available boards on the season. Gobert dropped 46.5 DK points on them earlier this season . . .

. . . and he has been a nice value even in games with double-digit spreads this year:

He is probable tonight with a stomach ailment and is coming off three straight games of 43-plus DK points. He absolutely destroyed Okafor and the 76ers on Wednesday, scoring 43.3 DK points in just 22.1 minutes of action. Tonight he also has a plus matchup against an Orlando team that has struggled to defend opposing centers, as evidenced by Whiteside’s +4.27 Opponent Plus/Minus on DK. He’s currently a top-five DK center in the Phan Model, and he has 12 Pro Trends and a 93 percent Bargain Rating.

On the other side of that game, Nikola Vucevic is an intriguing option against the Heat for the same reason. Miami has been the third-worst team in the league against opposing centers this year:

Vooch has absolutely demolished them in three meeting this year . . .

At just $300 less on FD than the likely chalky Gobert, he seems like a strong GPP pivot.