This article is one in a series that uses the FantasyLabs Tools to build daily fantasy scouting reports for each of the NBA’s brightest stars.c

Over his career, LeBron James has appeared in 1,034 regular season games and played an average of 38.9 minutes in those games. He’s played 199 more playoff games, averaging 42.4 minutes in those games. He’s a three-time Olympian and has represented the US in the FIBA championships twice. What I’m trying to say is that he has logged a lot of miles as a 32-year-old, 13-year veteran. Somehow, he is seemingly still improving. His average of 1.4 DraftKings points per minute this season is his second-best career mark while his average of 52.8 DK points per game is tied for his highest average over the past seven years.

In 2016-2017, LeBron’s scoring and rebounding numbers are both up marginally compared to his past two seasons in Cleveland, but the big story has been his passing. LeBron’s 8.8 assists per game will be a career high if he is able to keep up his current pace. He is generating nearly a quarter of his value from assists this season.

The increased assists have helped LeBron get the double-double bonus on DK more frequently. With 24 double-doubles in 47 games, you’ve had right around 50/50 odds of reaching this bonus when rostering LeBron this season. His previous high in double-doubles was 36, which he accumulated during the 2012-2013 season.

LeBron has shown a notable home/away split this season (per our Trends tool):

However, over his last three seasons with the Cavaliers, his split is nearly neutral:

I’ll side with the larger sample of data given that the team environment has remained relatively consistent over this time frame.

One of the primary concerns when rostering LeBron is whether he will see his full allotment of minutes in a game. Below, I setup a trend that screens for games in which LeBron’s Cavs were double-digit favorites over the past three seasons:

The numbers seem okay on first glance, but compared to his baseline +2.45 Plus/Minus and 57.1 percent Consistency, James’ numbers in projected blowouts are unimpressive. However, LeBron’s 17.3 percent ownership in these games is well below his overall 25.8 percent ownership. LeBron is obviously a better play in guaranteed prize pools than cash games when Cleveland is implied by Vegas to win by 10-plus points.

During LeBron’s second stint with the Cavs, Cleveland has been implied to lose only 20 times over 218 games.

LeBron does tend to show up in games against tougher opponents with a +5.3 Plus/Minus as an underdog. This is another area where you may be able to take advantage of an ownership discount.

Here’s how LeBron has performed against the NBA’s best teams regardless of which team was implied to win:

The 29.4 percent ownership leads me to believe DFSers are happy to roster LeBron in games they expect to be closer in score, which is more likely to be the case when Cleveland is playing an opponent whose winning percentage is at least 60 percent. Overall, he is adding approximately one point to his baseline Plus/Minus in these games.

On the other end of the spectrum is a more pronounced version of what we saw when looking at the projected blowout trend above.

On average LeBron loses 0.6 points in Plus/Minus but commands only 13 percent ownership when playing the league’s worst teams. Use that information as you will in GPPs.

LeBron has one of the most cemented roles on his team in the NBA. He is playing more minutes this year than he has over the previous two seasons, and he ranks 15th in usage. Whenever he’s on sale, you want to take note. In 21 games over the past three seasons, including four this season, James has crushed on DK when his salary is down at least $500:

This is going to be somewhat of a tangent, but I think we need to stop thinking of ‘back-to-backs’ as one category. Whether the second game of the back-to-back set has been played at home or on the road has been worth over one point in Plus/Minus for all players over a large sample:

2H games — the second game of a back-to-back set played at home — are less common but also much less detrimental to a player’s fantasy value than 2A back-to-back games.

Within that context, LeBron’s personal back-to-back splits more or less follow the league-wide trend. He is, though, somewhat of a scratch-risk in these games. Over the past two seasons, Cleveland has played in 28 back-to-back sets. Here are the total games played in the second games of these sets, broken down by player: 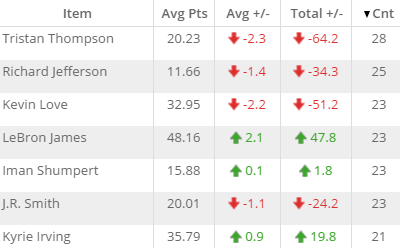 LeBron is on the wrong side of 30, and he’s accumulated a ton of miles over his 13-year NBA career. But he still prefers track meets to grind-it-out affairs, at least from a fantasy perspective. Below, I split LeBron’s 2016-2017 performance into quartiles based on the opponent’s pace differential in each game: 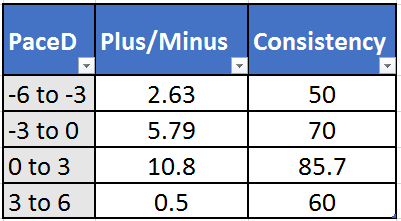 Of note, the 3-6 quartile includes a sample of only five games, including one blowout loss to Golden State, which is somewhat skewing the numbers. In the 0-3 quartile, we are looking at a sample of 14 games in which LeBron averaged a +10.8 DK Plus/Minus on 85.7 percent consistency. Overall, Cleveland is playing at a faster pace this season — the Cavs currently rank 14th in pace compared to 27th last season — but they still find themselves playing in plenty of pace-up games.

DK: Based on LeBron’s season average of 52.85 fantasy points per game, we would expect him to cost $11,000 DK. Instead, his price has peaked at $10,800, although his salary has been rising in recent days. On the season, LeBron’s average cost is $10,000. The discrepancy in LeBron’s estimated cost based on fantasy production and his actual average cost has led to a massive +5.61 baseline Plus/Minus in 2016-17.

FD: On FanDuel, we’d expect LeBron to cost $11,500 based on his average of 48.26 fantasy points per game. His actual average cost has been $10,100. The whopping $1,400 gap between those two numbers has led to even better numbers on FD than DK: A +5.99 Plus/Minus on 74.5 percent Consistency. On FD, though, LeBron’s price has finally caught up to his production. In his two most recent games, he has cost $11,200 and $11,500. Particularly with the Cavaliers’ Big Three playing at full strength, there may not be much upside left at that price point.

Things couldn’t be more simple when LeBron is off the court: Both Kevin Love and Kyrie Irving gain huge boosts in usage and Plus/Minus.

When LeBron is inactive for an entire game, Love and Irving still see big usage bumps but are not among the top Plus/Minus performers:

Instead, it is Cleveland’s bench players who gain the most Plus/Minus value. Over the past two seasons, Irving still averages a nice +5.2 Plus/Minus (DK) without LeBron, although Love has fallen into the negatives, posting a -2.5 Plus/Minus in seven games. Even though Love’s usage does go up, his field goal percentage, assist rate, and offensive rating all plummet without LeBron. In these instances, Love has historically been a price-sensitive play based on usage, while Irving has been an elite play.

When LeBron is ON the court, Cleveland’s shooters generally gain the most value:

This makes intuitive sense because . . .

When Irving is inactive, LeBron’s Plus/Minus surprisingly drops by a modest -0.2. Keep in mind though that Irving missed 28 games last season, including Cleveland’s first 23 of the season. Over that time, LeBron’s salary would have been able to adjust to reflect his increased role in the offense without Irving. If Irving misses individual games and LeBron’s price is not updated to reflect Irving’s absence, you may consider throwing that number out and instead focusing on his usage increase of 3.1 percentage points.

In the 10 games Love has missed over the past two seasons, LeBron’s Plus/Minus has increased by 2.9 points, although his usage differential is exactly zero. Intriguingly, his assist and rebound rates have improved without Love.

Here’s a look at how current Cavs have performed in LeBron’s 10 best fantasy games over the past two seasons. 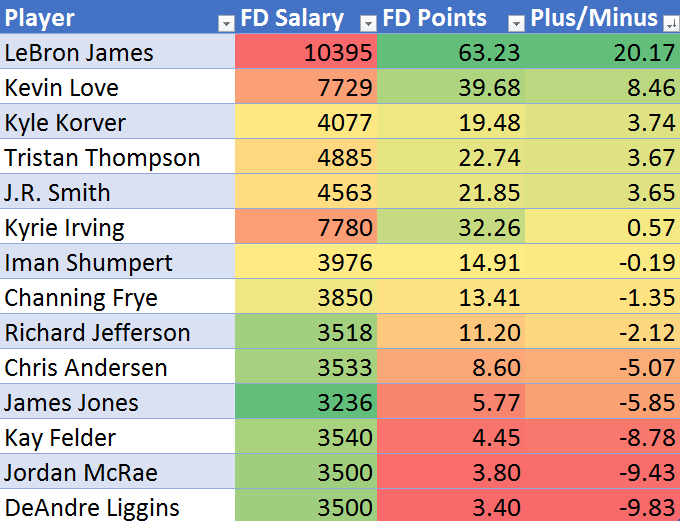 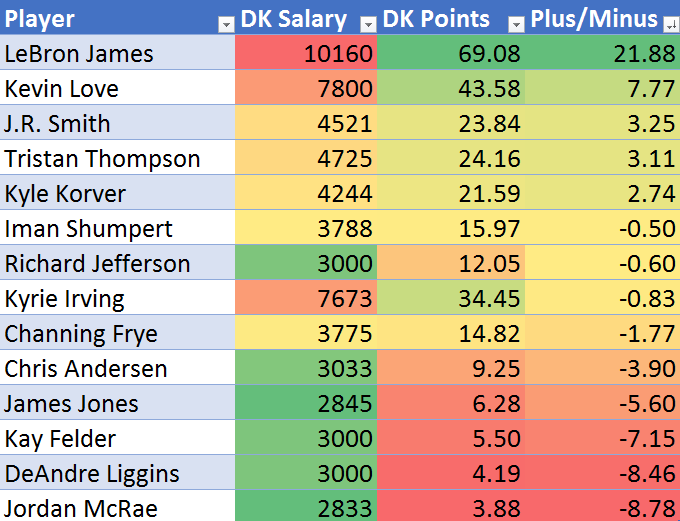 On both sites, James and Love have been a great combo to play together in GPPs. In LeBron’s best games, Love has logged an +8.46 Plus/Minus (FD), which is impressive considering Love’s generally elevated price. You could also pair LeBron with a shooter like Kyle Korver or J.R. Smith and hope that they are hot, while Irving is a clear fade when you are rostering LeBron.

LeBron has been one of the safest plays in DFS this year, currently ranking fourth in Average Plus/Minus and 10th in Consistency among players who have played in 20 or more games. He trails only Russell Westbrook (scouting report), Giannis Antetokounmpo, and Anthony Davis with his average ownership of 25.9 percent. His Consistency and ownership numbers scream ‘cash games,’ but don’t forget about LeBron in GPPs: He has exceeded 60 DK points 11 times already in 2016-17.