I almost didn’t even write a scouting report for Russell Westbrook because, really, what is there to say? Even at his current elevated salary levels, he still consistently rates among the top values in our Pro Models. He always seems to be at least 25 percent owned – and usually much higher — in any large contest. He’s averaging a triple-double almost halfway through the season. He is the NBA DFS GOAT and we all already knew that. So for today’s challenge, will I be able to find anything negative to say about Russell Westbrook?

Although Westbrook has eclipsed his previous high in points per game – 28.1, set in 2014-15 – by over three points this season, he is still less dependent on scoring from a fantasy perspective than he was during that season. Now Westbrook generates more relative value from rebounding than ever before. As Westbrook’s price continues to soar, it’s going to be tough to just blindly jam him into our lineups and his matchup will become more important. Projecting the battle of the boards into Westbrook’s range of outcomes is something others may not be properly considering because Westbrook is a ‘guard.’ However, rebounds are more important to his fantasy potential this year than they have ever been.

Next, let’s look at Westbrook’s Plus/Minus and Consistency by year:

Westbrook has averaged a higher Plus/Minus at a greater Consistency in 2016-2017 than in recent seasons. However, Westbrook did not eclipse $12,500 on DraftKings until nearly a month into the season this year and that price is near the minimum of what you might expect to pay for his fantasy services (in fantasy dollars) today. Later, we will adjust Westbrook’s season-long production to his current price point to get an idea of his anticipated value moving forward.

Like James Harden, Westbrook has been a better performer at home, where he has averaged over four more fantasy points since the start of the 2014-2015 season.

Looking at this season only, Westbrook has produced otherworldly numbers at home and been simply ‘great’ on the road. ‘Great’ was meant as a negative. It’s hard to find negative things to say about Westbrook.

Westbrook has done very bad things to the Phoenix Suns over the past three seasons: In nine matchups, Westbrook has exceeded 50 DraftKings points eight times and 80 DK points THREE times.

There are no big surprises among the teams Westbrook struggles against: When facing either Memphis, San Antonio, or Utah, Westbrook has exceeded his implied point total only 42 percent of the time. He has exceeded 70 DK points just once in 26 tries against this trio. Westbrook is awesome, but you still don’t want to get too cute and play him in the worst possible fantasy matchups.

In addition to being strong defensively, the above teams also generally play at a slower pace than most. When facing a team whose Pace Differential (PaceD) is -5.0 or more, Westbrook’s Plus/Minus dips into the negatives at -1.42. His average DraftKings ownership has been 31 percent. Even though it may seem like an obviously fade-able situation, you can still expect a large portion of the field to roster Westbrook anyway.

Based on Westbrook’s average of 64.82 DraftKings points per game, we would expect him to cost $13,400 on DK. Westbrook’s highest price this season has been $13,000 in a recent game against the Chicago Bulls on 1/9/17. It’s possible we will see Westbrook priced appropriately very soon, but for now at least, he remains underpriced.

That’s pretty remarkable considering the highest salary for a player other than Westbrook over the past three seasons was James Harden on 11/17/16 against the Portland Trail Blazers when he was $12,400. That is still $1,000 cheaper than Westbrook’s expected cost.

On FanDuel, Westbrook has had a Bargain Rating above 90 percent in 16 of 38 games, meaning his relative cost is lower on that site and it is easier to fit him into rosters as a result. That is reflected in Westbrook’s average ownership of 38.5 percent on FD this year.

This season, when Westbrook is off the court, the main beneficiary has been Victor Oladipo.

With Westbrook off the court, Oladipo’s usage shoots up nearly 10 points to 30.8 percent, although he takes an efficiency hit, as his offensive rating drops along with his points per possession. All told, we can expect around two more fantasy points per game from Oladipo without Westbrook.

Westbrook has not missed any games so far in 2016-2017, so we need to include last year’s results to get a clearer picture of what happens when Westbrook is out for an entire game. After including last year’s results and checking the “Full Games Only” checkbox using our On/Off Tool, here’s what we get:

Enes Kanter and Cameron Payne time. Before you get too excited, though, keep in mind that Oladipo is absent from this result set.

Below, I look at average production among Thunder players during Westbrook’s 10 best fantasy performances of the past three seasons first on FanDuel and then on DraftKings. 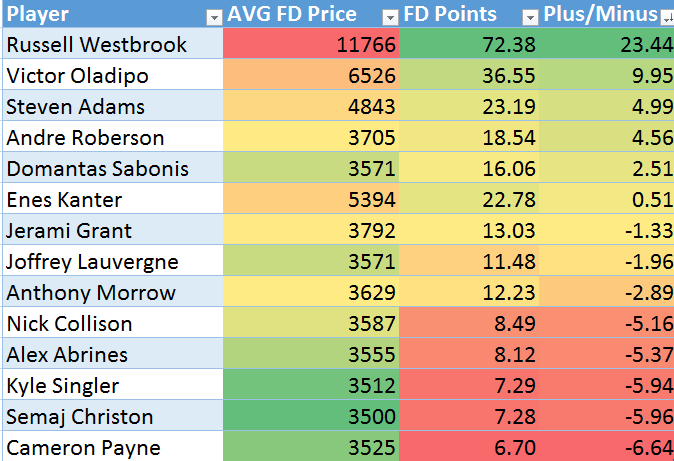 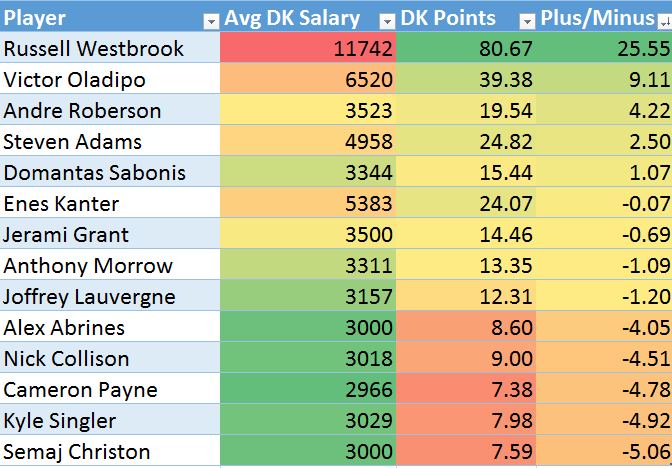 Is it possible to take down large guaranteed prize pools with Westbrook? The argument against revolves around Westbrook’s price and average ownership. Westbrook can score 70 fantasy points and still not finish among the night’s top values if there are other significantly cheaper players scoring 50 to 60 points.

In Westbrook’s 10 best fantasy games, he has averaged a Plus/Minus of +23.44 on FD and +25.55 on DK. Pricing is important here, though, as Westbrook’s average cost in these games is well below his ‘estimated’ cost from the previous section, as well as his current market value on both FD and DK.

In these games, Oladipo has returned the second best Plus/Minus on both sites. Beyond Oladipo, the next tier consists of Roberson and Adams, followed by ‘the rest.’ One notable name among ‘the rest’ is Enes Kanter, who has not been impressive in Westbrook’s best games.

Next, here are Westbrook’s worst games over the past two seasons on FD and then DK: 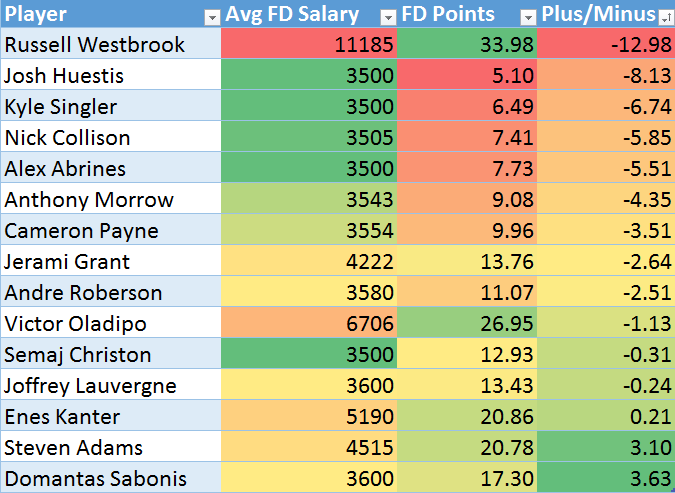 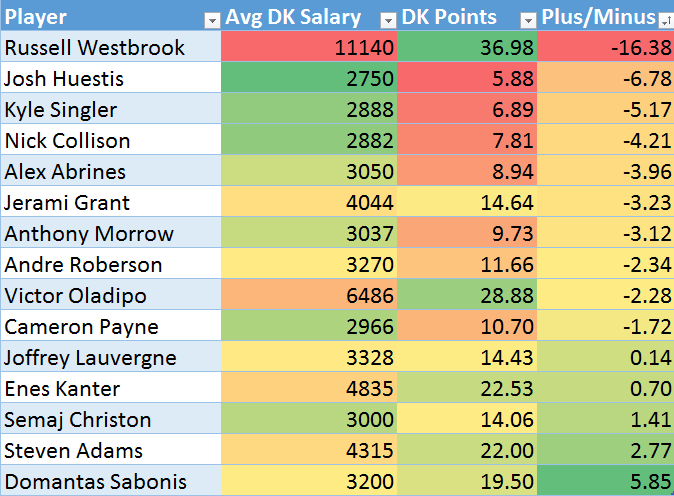 While Oladipo may feel like a smart ‘leverage’ play for Westbrook, Oladipo has actually done well in Westbrook’s best games and fared poorly when Westbrook underperforms. There really isn’t a great leverage choice on the Thunder roster, although Adams has at least posted a positive Plus/Minus in both Westbrook’s best and worst games.

Russ’s correlations tab more or less reflects the results that we see in the big games above:

I was mostly unsuccessful in my attempts to find negative things about Westbrook. Even at his current elevated price levels, he is probably underpriced. But he is getting closer to the point where his salary finally catches up with his production. For now, it’s still mostly safe to indiscriminately jam Westbrook into your cash lineups.