Our Models have Jayson Tatum, Jaylen Brown, Al Horford, and Terry Rozier all projected for 32-36 minutes and 30-34 fantasy points on both DraftKings and FanDuel, so it makes sense to target the lowest-priced option first. Tuesday’s honors in that category on both sites go to Tatum. The Duke product is going for $6,000 on DraftKings ($800 cheaper than the other three) and $6,700 on FanDuel ($600 cheaper than the other three). He’s struggled at times to get his shot off when defended by Tony Snell, but Snell’s playing time has decreased each game of the series, dropping to under 18 minutes last game. He’s also been a reliable play over the past month:

Tatum’s consistency and modest price tag make him the best cash-game play on the Celtics.

Brown is leading the Celtics with 23.8 points per game and coming off a 34-point explosion, but that’s caused his salary to come up to $7,300 on both sites, which obviously makes him a better play under FanDuel’s $60,000 cap.

The TD Garden should be a welcome site for Horford, who is averaging 44.6 DraftKings points per game at home in this series but only 27.0 on the road. Horford is a high-floor play at his position.

Rozier has had the highest floor among Boston’s top four in this series, scoring at least 27 DraftKings points in each of the four games. One worry with Rozier, though, is that the expected return of Marcus Smart (thumb) could potentially cut into his playing time. Another concern is that Rozier is the highest-priced point guard on FanDuel as well as the second-highest priced one on DraftKings. Ultimately, there are a bunch of better and cheaper values at the position — including Smart, who could play minutes in the mid- to high-20s.

Starting center Aron Baynes is usually an afterthought in DFS, but perhaps he shouldn’t be. His value over the past 10 games might surprise you:

Baynes also leads the Celtics in Opponent Plus/Minus at +5.58 on DraftKings. He’s a solid tournament play; just know that his floor is in the low single digits. Marcus Morris is also a solid tournament play, and like Horford, Morris has been much better at home, averaging 30.0 DraftKings points in Boston’s two home games and 14.9 in its two road games. 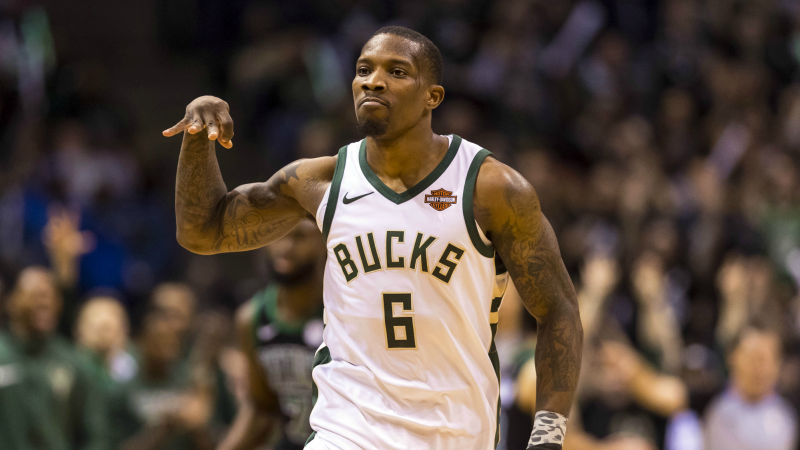 Tuesday NBA Playoffs Guide: The Bucks Are an Over Machine

With John Henson (back) set to miss another game, Thon Maker‘s middle name might as well be “Money.” Maker’s playing time increased from 24:19 in Game 3 to 30:47 in Game 4, and there’s no reason to think coach Joe Prunty will go away from Maker after the Bucks won both of those games. Tyler Zeller will likely start but is nothing more than a tournament dart throw.

Khris Middleton has scored no fewer than 23 points in a game in this series. Milwaukee’s No. 2 option gives you Giannis upside at a discount.

Malcolm Brogdon and Jabari Parker are solid value options. Our Models have Brogdon projected for 30 minutes and Parker for 25 minutes, but Parker’s DraftKings floor is projected at over 11.0 and Brogdon’s under 2.0.

Eric Bledsoe has been a DFS non-factor this series with paltry averages of 11.8 points and 4.3 assists per game.

Joel Embiid has been a high-floor play against Miami this season, but he’s also been somewhat of a low-ceiling play when slaary is taken into account (DraftKings):

Ben Simmons hasn’t had that same issue, however:

I wouldn’t go Simmons over a discounted Giannis on DraftKings, but given his history against Miami, he’s definitely playable even at a five-figure salary.

Embiid’s presence lowers the floor of Dario Saric, who failed to reach 30 fantasy points for the first time in the series in Game 4. Saric still retains a ceiling in the high-40s, but he’s a better play on FanDuel, where his $6,400 salary is the same as it is on DraftKings.

J.J. Redick, Marco Belinelli, and Robert Covington are playable as semi-cheap wing options, but none has a positive Projected Plus/Minus in our Models. Covington has more appeal on DraftKings, where his $5,100 salary is $1,400 cheaper than on FanDuel, giving him a 99% Bargain Rating on the former.

On DraftKings, Goran Dragic owns the top Projected Plus/Minus on the Heat. He’s hit value in each of the past three games and ca,e ip short by only 3.81 points in Game 1.

Dwyane Wade is a solid value who’s priced under $6,000 on both sites, but especially on FanDuel where he’s got a 90% Bargain Rating. He’s played between 25 and 26 minutes in each of the past three games but still has huge upside; his usage rate has been above 37% twice already in this series.

Justise Winslow would see an increase in value if Josh Richardson (shoulder) is out. Both Heat wings are better values on FanDuel than on DraftKings.

Miami’s center rotation is back to being muddled after Hassan Whiteside got going with 13 points and 13 rebounds in Game 4 while Kelly Olynyk got into foul trouble and played under 10 minutes. With Whiteside priced down and Olynyk priced up, Whiteside makes for the higher-leverage play. Bam Adebayo is averaging 15.2 minutes per game this series and is in the mix as a dart-throw tourney option.

Our Models project Kevin Durant with the best Plus/Minus of the Warriors on DraftKings and Draymond Green with the top mark on FanDuel. Both are averaging over 36 minutes per game this series, but a potential blowout is a concern given their elevated price tags and this game’s double-digit point spread.

JaVale McGee remains a solid punt play at center. He’s averaging just 16.8 minutes per game but scored over 25 DraftKings points twice this series with a low of 14.5, which is a decent floor given his $3,800 salary.

Andre Iguodala has played 23-28 minutes in each game this series and is a solid tournament option at $4,700 on FanDuel. However, it’s worth noting that Kevon Looney, David West, and Shaun Livingston are all at least $1,400 cheaper than Iggy on DraftKings and have superior Projected Plus/Minuses.

The Spurs are in a bad spot as double-digit underdogs on the road in a game that could clinch the series for Golden State. LaMarcus Aldridge is the highest-ceiling play on the Spurs but has a negative Projected Plus/Minus amidst the blowout risk.

Rudy Gay is the top floor/ceiling play on the team right now when taking into account his mid-range price tag. He’s posted a +5.86 Plus/Minus and 80% Consistency on FanDuel over his past 10 games.

Patty Mills and Manu Ginobili are both good values in the backcourt; both have positive Projected Plus/Minuses on both sites. Beyond those two, It’s tough to predict exactly how much the other rotation guys (Pau Gasol, Dejounte Murray, Tony Parker, Danny Green, Kyle Anderson, Davis Bertans) will play, rendering them as nothing more than tournament Hail Marys at best.