Gordon Hayward has always had to fight for his position among basketball’s elite. Despite leading Butler to within a half-inch of a national championship, he still fell to ninth during the ensuing 2010 NBA Draft. Hayward’s early years in Utah were fairly uneventful, but that changed four seasons ago.

The loss of backup small forward DeMarre Carroll after the 2012-2013 season left a hole in the Jazz’s rotation. The solution was to feature Hayward more than ever before, and he hasn’t looked back since. Hayward has averaged over 34 minutes per game during each of the past four seasons and has continued to increase his shooting output during every season since he’s entered the league. Now averaging a career-high 22.5 points per game with 47/39/86 shooting splits, Hayward has emerged as one of the best wings in the league during a time in which every NBA team could use an elite wing. Thanks to four-year highs in field-goal and 3-point percentage, Hayward is averaging a career-high 37.15 DraftKings points per game this season.

Hayward’s transformation during the 2013 season wasn’t limited to just scoring the basketball. He’s averaged between 4.9 and 5.6 rebounds over the past four seasons and has averaged at least 3.5 assists per game over the same time span. Of course, Hayward makes his money as a scorer and he’s really taken a leap this season. After averaging a career-high 19.7 points per game last season, he’s averaged 22.5 points per game through 59 games this season.

Historically, players have averaged a +0.3 Plus/Minus at home and a -0.2 Plus/Minus on the road during the past three seasons. This has resulted in most players being higher owned at home, as you might expect. This hasn’t exactly been the case with Hayward:

Per our Trends tool, we see that Hayward has been a different animal and the same beast wherever he’s played during the last three seasons. His slight increase in DK points per game at home is negligible. What does matter is his ownership, and it’s clear that he’s been underowned on the road throughout his career. Hayward’s ability to thrive both at home and away from Vivint Smart Home Arena has once again been clear this season:

Hayward has actually been more consistent on the road this season. He’s in play at home as well, but look to utilize Hayward during road games when we can expect his usual production, but with lower ownership.

Hayward has also proven to have agnostic splits as an underdog or as a favorite, but this isn’t the case when we consider games in which the spread has reached double digits. He’s particularly struggled during games when the Jazz are 10-plus point underdogs:

Hayward’s 17-game sample as a 10-plus point underdog isn’t huge, but it’s telling. Overall, he’s posted a -5.15 Plus/Minus with 23.5 percent Consistency and has averaged just 28.88 DK points per game during those situations. The Jazz are currently the No. 4 seed in the Western Conference and likely won’t be massive underdogs very often the rest of the season, but be sure to fade Hayward if the situation presents itself.

Hayward’s production may not change much depending on where he plays, but his production has changed when playing the back end of a back-to-back:

He’s thrived at home during back-to-backs, but it’s been a different story on the road. Overall, Hayward has posted a -2.4 Plus/Minus during his 30 2A games. He still hasn’t been terrible, as his 50 percent Consistency is higher than the average NBA player’s 46 percent mark, but he’s clearly been a superior play at home. Hayward has surpassed his implied value during 14 of his 17 2H appearances over the past three seasons.

With a player as consistent as Hayward, it’s not surprising to see that he’s smashed value when his salary has dropped:

Overall, he’s posted a +3.45 Plus/Minus during his 42 games that his salary has dropped by at least $500 during the current month. Hayward’s low ownership during those situations is another positive. We’ve seen that Hayward’s performance hasn’t wavered unless he’s been a large underdog or playing on the road during a back-to-back, so look to utilize him whenever his salary drops by a significant amount.

Hayward’s salary on DK has been all over the place this season. He’s reached a low of $6,600 and a high of $8,700 through 59 games, though his salary has remained on the cheap end lately. Overall, Hayward hasn’t been priced above $8,000 since January. He’s averaged 37.15 DK points per game this season, which implies he should be priced at $7,900. Hayward’s salary opened up at $7,300 after the All-Star break, so it’s still fair to say he’s a bit underpriced at the moment.

Hayward’s presence on the court hasn’t led to many notable Jazz teammates thriving:

Of his top-four teammates in DK Plus/Minus Differential, only Shelvin Mack has averaged over 20 minutes per game. Mack has been a solid contributor off the bench, though he’s failed to surpass 20 points in a game even once this season and won’t be a playable DFS option on most nights. It’s not surprising that Hayward’s presence on the court hasn’t made a huge impact on his notable teammates, as Hayward has averaged just 3.5 assists per game this season – his lowest mark since 2012.

We see some more familiar names when we take a look at how the Jazz have performed with Hayward off the court this season:

Rodney Hood has been the clear beneficiary when Hayward has missed time this season. While Hood is technically a shooting guard, he’s able to seamlessly take over as the team’s top wing thanks to his 6’8″ frame. Trey Lyles, Dante Exum, and Boris Diaw have also produced solid value with Hayward off the court, though none of those players are averaging over 19 minutes per game this season.

Just as Hood dominates when Hayward leaves the court, Hayward has crushed when Hood has been out:

Hayward and Hood have both proven to be solid options when playing without each other. Despite their (DFS) hatred for each other, Hood and Hayward have both thrived without Rudy Gobert on the court:

Both Hood and Hayward have become larger parts of the Jazz offense when Gobert sits. The result has been that both players have crushed their value without the focal point of the Jazz’s defense. It’s clear that the Jazz aren’t a better team without Gobert on the court, but Hayward and Hood have both largely benefited from his absence.

Below is the average production for the Jazz during Hayward’s 10 best fantasy performances of the past two seasons, first on FanDuel and then on DraftKings. 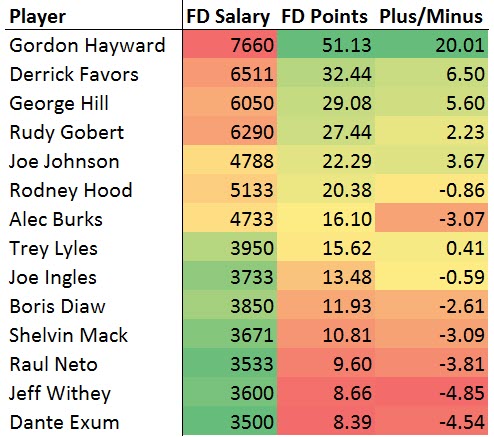 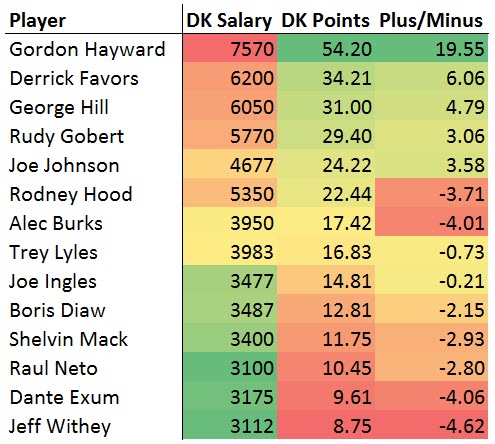 Hayward may present a lot of value with Gobert off the court, but it’s clear that stacking Hayward with one of his frontcourt monsters is the way to go. Derrick Favors and Gobert have both crushed their implied value during Hayward’s top-10 fantasy performances of the past three seasons. The early returns on a Hayward-Joe Johnson or –George Hill stack have been promising, though neither has started more than 35 games with the Jazz. Our previous findings in the On/Off section hold true, as Hood has struggled during Hayward’s best fantasy performances.

Hayward will be a free agent in 2018, and he’ll be one of the most desired players on the market. The Jazz have the slowest pace in the league, per NBA.com, but this hasn’t stopped Hayward from establishing himself as one of the most feared scorers in the league. His shooting prowess has proven to be effective both at home and on the road, though he’s historically struggled as a large underdog and on the back end of a road back-to-back. Still, Hayward’s consistency is one of his best attributes, and he’s repeatedly smashed value when his salary has dropped by $500 or more.

Look to utilize Hayward while his salary remains below $8,000 on DK and FD. Look to stack him with one of his frontcourt teammates, specifically either Gobert or Favors.