After sitting out his rookie season, Blake Griffin emerged in 2010 as one of the most electric rookies in recent memory. His game was mostly limited to vicious dunks, but that wasn’t really an issue considering the strategy amounted to him averaging a 22.5-12.1-3.8 line. The basketball world braced itself for what a finished-product version of Griffin could look like.

Well, it’s now 2017 and the new-and-improved version of Griffin isn’t exactly taking the league by storm. He’s made plenty of improvements, including the development of a mid-range jumper and better handles, but he’s also played a combined 71 games over the last season and a half. New-look Blake isn’t as exciting as the rim-running rookie version, but that doesn’t mean he still isn’t a force with which to be reckoned.

The specific nuances of Griffin’s game may be different than they were five years ago, but his per-game averages have seemed to plateau over the years. Aside from pulling down a career-low 7.6 rebounds per game in 2014, he’s averaged between 8.3 and 9.5 rebounds per game since 2012. Griffin has dished out between 4.9 and 5.3 assists per game during each of the past three seasons. He averaged a career-high 24.1 points per game in 2014, but he’s now settled in between 21.4 and 21.9 points per game over the past three seasons. Of course, averaging a consistent 21-8-5 is very rare in today’s NBA and Griffin has proven to be even more exceptional during certain situations.

Griffin has consistently played better at the Staples Center over the past three seasons:

Per our Trends tool, we see that he’s posted a +1.7 Plus/Minus at home with 55 percent Consistency and has averaged 44.42 DK points per game. Griffin’s improved play at home hasn’t slipped by the public, as his ownership at home has been significantly higher than it’s been on the road. This trend has been evident during each of the past three seasons. Griffin isn’t a disaster on the road, but he’s a bit better and has proven to be more consistent at home.

The Clippers are consistently one of the best teams in the league, though they always seem to be just outside of the top-four or five contenders on a yearly basis. This hasn’t resulted in many deep playoff runs, but that shouldn’t necessarily be pinned on Griffin. He’s historically balled out against the league’s elite teams:

Against opponents with a win percentage of 60 percent or higher, Griffin has excelled. He’s exceeded his implied point total during 54.4 percent of his games against the league’s elite over the past three seasons. Of course, the league’s elite (in Griffin’s eyes) has often consisted of three key Western Conference foes:

Griffin has proven to be less effective against the league’s worst teams:

His numbers are down across the board against oppponents with a win percentage of 40 percent or worse. Look to target Griffin against the game’s elite and not so much against the league’s bottom-dwellers.

If Griffin’s performance against the league’s better teams was surprising to see, take a look at his performance during back-to-backs:

Although he’s played in only 33 total back-to-backs over the past three seasons, Griffin has dominated. His performance during 2H back-to-backs has been particularly astounding, but he’s historically proven to produce value after two consecutive road games as well.

Chris Paul (AKA CP3 AKA Point God) is known for helping set up his teammates for success. Still, he’s also consistently forced his teammates to play without him for stretches of the regular season, as he’s missed eight-plus games during five of his last six seasons. Surprisingly, the absence of the Clippers’ floor general has resulted in some mammoth games from Griffin:

Griffin has been banged up himself during his career, but he’s balled out during his 10 games without CP3 over the past three seasons. His 15.5 percent ownership reflects the (rational) idea that Griffin could be worse without his point guard, but that hasn’t historically been the case. Griffin has taken over the offense without CP3 on the court and this was most evident during the Clippers’ ill-fated second-round series against the Houston Rockets in 2014. With Paul out for the first two games of the series, Griffin posted a 26-14-13 line followed by a 34-15-4 line. CP3’s ability to get everyone involved in the offense is a great thing for the Clippers’ success as a team, but Griffin has been at his DFS best when he’s been allowed to work as the team’s featured playmaker.

Griffin’s salary on DK has reached a low of $7,500 and a high of $9,500 this season. This shift has almost entirely consisted of his recent play, as he was priced at $7,600 on January 24th upon returning from injury before reaching a season-high $9,500 during his last game before the All-Star break. Considering Griffin has averaged 43.35 DK points per game this season, his implied price is right around $9,200. An argument could be made that he’s currently overpriced, but his recent excellent play without CP3 in the lineup suggests he’s still a value.

Griffin’s salary on FanDuel has mirrored that of DK: His season-low $7,400 price tag came upon returning from his injury, but he’s since reached a season-high $9,800. Griffin has averaged 40.82 FD points per game this season, meaning he should be priced at $9,800.

Griffin’s presence on the court this season hasn’t exactly led to much value for his teammates:

Overall, Marreese Speights is the only Clipper who has surpassed his value with Griffin on the court this season. Of course, his average of 16.5 minutes per game doesn’t make him a DFS option.

The court has opened up for teammates when Griffin has missed time:

Understandably, frontcourt teammate DeAndre Jordan has balled out when Griffin has sat this season. Griffin’s jump shot has come a long way since his rookie season, but the floor is still fairly cramped when he and Jordan are forced to share the court together. The removal of one frontcourt monster has proven to result in increased value for the other:

Griffin has absolutely dominated without Jordan on the court this season. This is consistent with his aforementioned ability to ball out when CP3 has sat out:

This has been the case with Griffin all season: He’s taken over when one of his marquee teammates has missed time. Seriously, Griffin has balled out even when J.J. Redick has taken a seat:

So much of the Clippers’ offense is reliant upon CP3’s ability to break down a defense and generate great looks for his teammates. Still, Griffin is a rare specimen who can take the ball and create points on his own. He’s been regularly featured when one of the Clippers’ starters has sat out this season and he’s made good use of the opportunities. Look to utilize Griffin when any of the Clippers’ additional three key starters are forced to miss time.

Below is the average production for the Clippers during Griffin’s 10 best fantasy performances of the past two seasons, first on FanDuel and then on DraftKings. 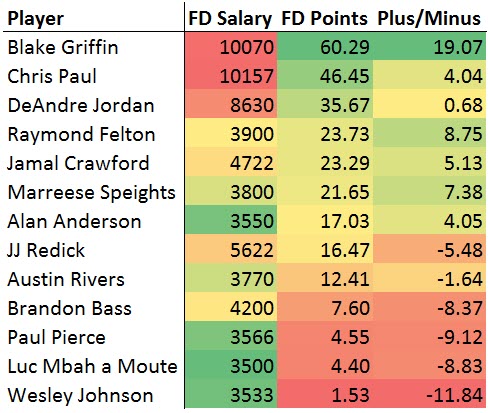 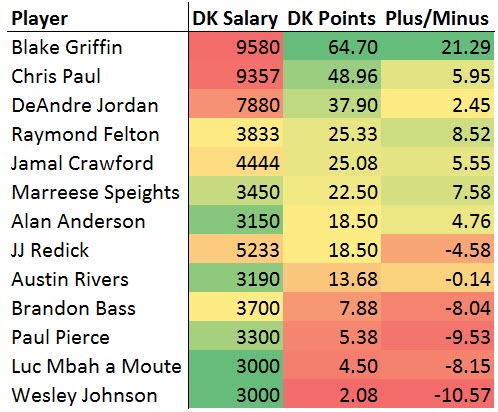 We just discussed why Griffin has thrived without CP3 on the court, but it’s clear that they’re still a very effective duo when both are healthy. Raymond Felton and Jamal Crawford may not play enough on a night-to-night basis to warrant consistent stacks with Griffin, but they’ve both proven capable of going off during Griffin’s big games. Look to feature Griffin with his No. 1 point guard when possible, but don’t be afraid to also stack Griffin with Felton or Crawford when CP3 is out.

Jordan has been slightly better on DK than FD during Griffin’s big games. Still, they both rely on similar statistics — specifically rebounding — and they’re a tough sell as a stacking option. The other relevant Clippers either don’t play enough minutes to warrant stacking with Griffin (Speights and Alan Anderson) or have played poorly during Griffin’s top-10 fantasy performances (Redick and Austin Rivers).

Griffin isn’t your everyday star player. Once known for simply dunking over anyone and everyone, he now consistently gets teammates involved in the offense and is capable of stretching the defense with a mid-range jumper. Griffin has proven to be more valuable during certain game settings, specifically when the Clippers are home, when they’re facing an elite opponent, or when CP3 is out of the lineup. Still, CP3 is nicknamed the ‘Point God’ for a reason, and he’s proven to be more than capable of also going off during Griffin’s big games.