The center position over the last few years has greatly evolved thanks to incredible young talent like DeMarcus Cousins, Karl-Anthony Towns, etc. However, there is a rare star that is rising at the position that doesn’t need to shoot 3-pointers and score 30 points in a game to cement his status. Rudy Gobert is quickly establishing himself as one of the best defensive players in the game and is already the strongest rim protector in the league. While he may never have the total-game ceiling that Boogie or KAT have, Gobert has proven to be an incredibly valuable asset.

The biggest knock on Gobert throughout his career is that he does not score a lot of points. While this is mostly true, Gobert has taken a major leap in the scoring department this season: He is averaging an additional four points per game in scoring this season versus his previous two. And even despite the lack of scoring compared to other centers, he’s able to have big fantasy days because of his rebounding and defensive statistics. In his two most recent games over 50 DraftKings points, Gobert scored ‘only’ 27 and 26 real points.

He is essentially a lock for 10 or more rebounds on any given night, and his rebounding has accounted for over 40 percent of his fantasy scoring. He also averages over two blocks per game as an added bonus. Gobert’s reliance on rebounds makes him much more of a cash-game player than a high-upside GPP player. He has only four games over 40 DK points in his last 15 games.

As a team, the Jazz averaged more rebounds, blocks, and points while at home in 2015. However, Gobert averaged 27.3 minutes on the road versus 26.3 minutes at home in that season. Ultimately, it seems that his career splits tend to show more noise than a notable correlation. Regardless, Gobert’s ownership does not see a significant boost while at home or on the road.

The Utah Jazz will likely finish with the slowest pace in the NBA in back-to-back seasons. This essentially means that there is not any scenario in which Gobert will be ‘paced down’ in a given matchup. In the below table, I’ve broken down Gobert’s performance based on the pace differential between Utah and opponents:

In a fairly large sample of 40 games (over the last two seasons) at a PaceD of four to six, Gobert has posted a +4.64 Plus/Minus on 67.5 percent Consistency. Unfortunately, in games that are very high-paced, Gobert has posted a small Plus/Minus of +0.92. These trends just continue to show us that scoring a bunch of points is not currently part of Gobert’s game. In line with these numbers, the Jazz are scoring only 8.4 fast break points per game this season — the second-lowest mark in the league.

One situation that Gobert sees a significant boost is as a Vegas favorite.

Gobert averages a massive +6.3 Plus/Minus as a favorite and a pitiful -0.4 as a dog. He averages nearly seven more fantasy points as a favorite as well, while somehow seeing almost three percent less ownership.

We also see that even as a heavy favorite, Gobert sees a major boost in Plus/Minus:

Over the last two seasons, Gobert sees an increase in points and blocks when the Jazz are a seven-point favorite or better. 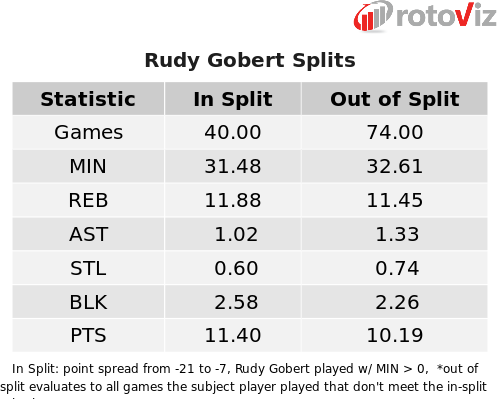 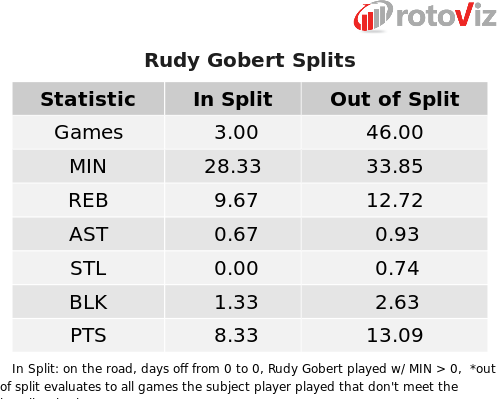 Gobert spent the majority of the early season in the $6,100-$6,500 range. After a three-game run of 40-plus DraftKings points in early December, Gobert quickly jumped into the $7,000 range. He has seen his salary dip back below $7,000 only a few times since then. Based on his season average of 36.67 fantasy points, we would expect him to have an average cost of $7,300. His average cost in 2016-17 has been $6,900, but Gobert continues to find his price inching toward the high-$7,000 range. With Gobert averaging almost as many fantasy points as his peak price point, he is a value on most nights. However, once his salary exceeds $7,300, he will need better-than-average production to return value.

On FD, Gobert’s salary has similarly peaked at just over $8,000. Overall, he has cost an average of $7,300 against an expected cost of $8,200. Gobert has been a much better value on FanDuel this season than he has been on DraftKings. Rudy has cost under $8,000 in eight of his last 10 games. He has met value in seven of those 10. However, he has crossed the 40 FD point threshold only once in that span. Gobert looks to be a very consistent cash-game play on FD as long as his price is sitting below $8,000.

While the Stifle Tower has been in the NBA for only two seasons, it is very clear that the Jazz are a different team with and without him on the court. When Gobert is off the court, we see that only three Utah players aren’t negatively affected by his absence.

Excluding Rodney Hood and Gordon Hayward, Gobert’s absence has a mostly negative effect on the Jazz’s Plus/Minus across the board. Gobert ranks second in the NBA in Defensive Rating and simply makes the Jazz a better team when he is on the court. However, Gobert averages only 13 points per game; his absence doesn’t offer a lot of room for teammates to pick up on lost scoring.

Interestingly, when Rudy is on the court, none of the Jazz players see significant boosts in production outside of Raul Neto, who has barely played this season. Outside of Neto, it looks as though Gobert provides the biggest Plus/Minus boosts to the wing who is on the court with him. This makes sense, since Gobert is averaging only one assist per game but is assisted on over 75 percent of his shots.

Below is the average production among Jazz players during Gobert’s 10 best fantasy performances of the past two seasons, first on FD and then on DK. 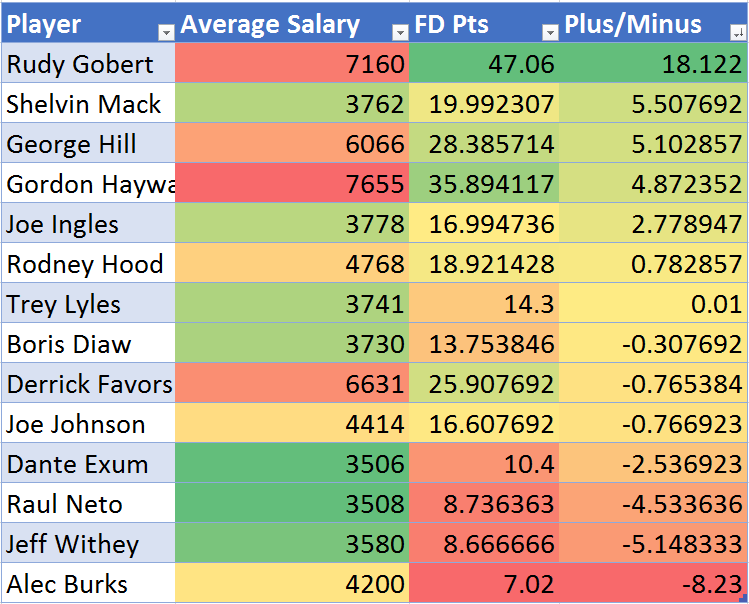 As we saw earlier, Gobert seems to help his guards and small forwards the most of any players on the court with him. This is most likely due to the high number of his shots that are assisted. That said, he has a very minimal negative effect on the other bigs who are on the court with him. For the most part, however, when Gobert goes off . . . just Gobert goes off. For reference, Victor Oladipo averages a +9.95 in Russell Westbrook’s best games, and Marcin Gortat averages a +7.58 in John Wall’s best games. 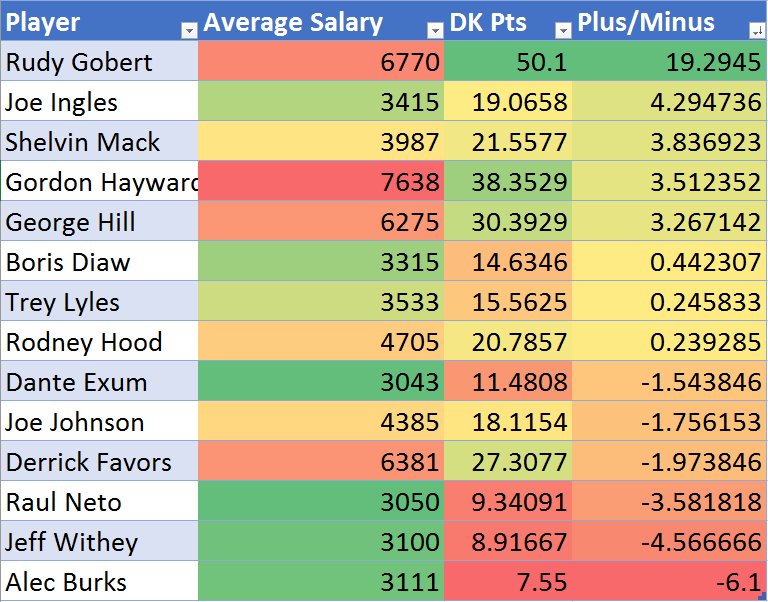 The results on DraftKings are largely the same, with Gobert giving only small boosts to his surrounding teammates in his big games. However, we do see that he tends to benefit the wings slightly more on DK. For the most part, we see that Gobert is best played alone in GPPs or with a cheap forward or guard who may benefit from a handful of assists.

Gobert’s correlation tab shows that he does not correlate with many of his teammates outside of the SF position:

Gobert has quickly established himself as one of the best rim protecting centers in the NBA. However, he does not score a lot of points and mostly relies on his secondary statistics to be a fantasy producer. That said, we have seen Gobert put together massive fantasy nights in the games that he eclipses 20 points scored. Unfortunately, he isn’t doing it often enough to warrant his current salary spike. Enjoy Gobert on the evenings when his price is depressed and when the Jazz are a favorite.