Just below the Russell Westbrook tier of DFS point guards (in which Westbrook is the sole member) sits John Wall. Although the Wizards have slowed down the pace, ranking fifth in 2015-2016 and 14th this season, Wall has excelled in 2016-2017 thanks to a breakout season scoring the ball.

There’s no question Wall has taken a leap as a scorer in the 2016-2017 season. While his rebound and assist numbers remain largely the same over the last three years on a per-game basis, he has added over three more points per game this season on only 0.8 more shot attempts. He has cut back a bit on 3-point attempts and is shooting a significantly higher percentage from the field while getting to the free throw line more frequently.

Put it all together and the result is a new career high in fantasy points per game:

You don’t generally hear analysts put too much weight into home/away splits for superstar NBA players, but Wall marks the fourth player in four scouting reports who has performed significantly better at home over the past three seasons. Like Russell Westbrook, James Harden, and DeMarcus Cousins, Wall’s raw fantasy production, Plus/Minus, and Consistency is greater at home. Unlike the others, though, Wall’s ownership is also significantly higher at home. We just started projecting ownership this season, so this may be partly explained by a small sample size. It’s possible that DFSers are more aware of Wall’s home/away splits than they are of other players who have this same split.

As was the case with Cousins, Wall plays much better when the Wizards are favored to win. Here, the ownership has not followed the split: Wall has actually been more highly-owned this season in games Washington is implied to lose by Vegas.

When Washington is both playing on the road and implied to lose, Wall is an easy fade.

Further extending what we just looked at, Wall performs worse and worse as a road trip progresses. When Washington has played three or more consecutive road games, Wall has exceeded his implied point total only three times in 17 attempts.

Wall’s greatest asset may be his quickness. Because of that, it was my assumption that Wall may perform better when facing a tired opponent – one that is playing on the second half of a back-to-back set. In 53 of these games over the past three seasons, Wall has added 0.7 fantasy points to his +2.43 baseline Plus/Minus on DraftKings.

Salary Change
In 2016-2017, DraftKings has been quick to adjust Wall’s salary-based implication according to matchup and recent performance. At his cheapest point — a 11/26/16 game against San Antonio — Wall’s salary was $8,100. On the other end, Wall has cost as much as $9,600 in a 1/17/17 matchup with the Knicks. FanDuel’s pricing has not been as responsive this season, which has resulted in Wall playing in games with a Bargain Rating of 75 percent or greater 18 times this season.

In these games, Wall has been an excellent investment.

Conversely, DK’s dynamic pricing has resulted in Wall having a Bargain Rating of at least 75 percent on FanDuel 10 times this season. Wall’s Consistency has also been excellent under these conditions:

On FanDuel, we would expect Wall to cost $10,700 on average, but his average cost has been $9,500. In fact, $10,700 represents his season-high in salary, which he achieved in his most recent game against the Boston Celtics. It remains to be seen whether Wall has been priced up for a recent string of plus matchups or whether he will be priced in the mid-$10,000 range moving forward. If the latter is true, there may not be much profit potential until his price falls on FanDuel.

When Wall has been off the court in 2016-2017, the biggest beneficiary has been Markieff Morris. Morris sees a huge bump in usage (5.6 percent) and Plus/Minus (6.6 points) without Wall. The player who has been hurt the most is Marcin Gortat, who has a slightly negative Plus/Minus differential.

In the seven games Wall has missed over the past two seasons, the primary beneficiaries have been Washington’s backup guards, such as Tomas Satoransky and Marcus Thornton. Somewhat surprisingly, Bradley Beal has posted a negative Plus/Minus differential in the four of these games that Beal played. Although Gortat has had a negative differential with Wall off the court this season, it’s a different story when Wall misses an entire game. When Wall is inactive, Gortat gets a 1.5 percent usage bump and a 2.1-point increase in Plus/Minus. Morris excels in both result sets.

Flipping things around, Wall suffers a rather substantial 2.3 percent usage decrease and -2.0 Plus/Minus differential when sharing the court with Morris. When Morris is off the court, Wall takes over:

While Wall’s numbers with Morris off the court are impressive, take a look at what happens when Beal is on the bench:

Without Beal, Wall’s usage jumps to a massive 40.1 percent.

Surprisingly, the teammate Wall has benefited the most sharing the court with has been Kelly Oubre. In 430 minutes on the court together this season – or about half of Oubre’s total 855 minutes – Wall gains 5.5 points in usage and 7.6 points in Plus/Minus.

Below, I look at average production among Wizards players during Wall’s 10 best fantasy performances of the past two seasons, first on FanDuel and then on DraftKings. 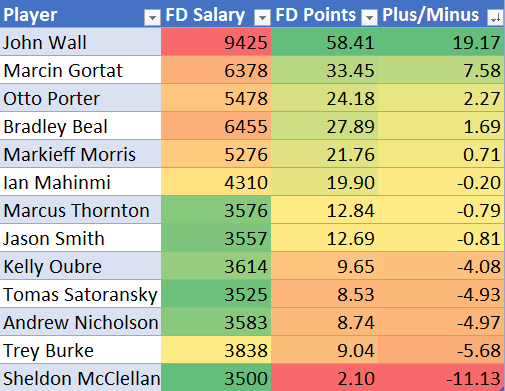 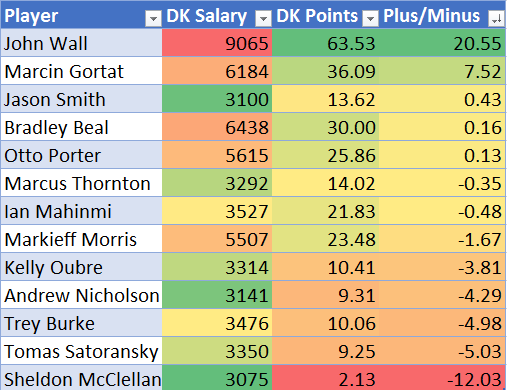 This is one of the easier stacks to breakdown: Gortat has played well during Wall’s biggest games and everyone else has been unimpressive. On DraftKings, Jason Smith has the next best Plus/Minus, ahead of Beal, Otto Porter, and Morris. Based on the On/Off data, it makes sense that Morris struggles here, to the tune of a -1.67 Plus/Minus.

On FanDuel, where the pricing is a bit softer, Porter and Beal each have acceptable Plus/Minus numbers after Gortat, but nothing that’s going to make you deploy a four-player Wizards stack next time you get the chance. Morris sneaks into the positives on FD, while Oubre’s Plus/Minus falls even lower.

Wall’s price has been all over the place this season, peaking in the mid-$10,000 range on each site. Given the salary differential between the sites over Wall’s last few games, he is becoming somewhat of a site-specific play until FanDuel either lowers his salary or DraftKings raises his salary.

As an elite point guard, it’s somewhat surprising that Wall benefits when the Wizards’ primary scorers are on the bench or inactive. With Beal and/or Morris off the court, Wall’s usage rate becomes astronomical and he looks to take over games. If deploying a game stack, Wall should be used alongside Gortat in a two-player stack.