This article was updated to reflect Cousins being traded to the Pelicans on 2/19/17.

Prior to being dealt to New Orleans, DeMarcus Cousins was averaging a career-high 53.74 DraftKings points per game despite playing in the Kings’ slowed-down offense in 2016-2017. The Kings have played five possessions per game slower this season than they did last season, but Cousins was able to more than make up for it with a 37.2 percent usage rate. That number smashed his previous high of 35.2 percent.

Now a member of the Pelicans, Cousins’ usage rate will almost definitely decline playing next to Anthony Davis, whose usage rate in 2016-2017 has been 32.3 percent. Over the last five seasons, Cousins’ teammate with the highest usage rate has been Rudy Gay during the 2014-2015 season, in which Gay posted a 27.0 percent usage rate.

Per our On/Off tool, when Cousins and Gay shared the court during the 2014-2015 season, Cousins’ usage rate dropped by 1.5 percent and his per-game Plus/Minus dropped by two full points. The main issue was a decrease in field goal attempts per game of 3.9. Although Cousins did increase his shooting percentage when sharing the floor with another high-volume scorer, that was not enough to make up for the opportunity lost in shot attempts.

We can probably expect Cousins to see even sharper declines in field goal attempts and usage playing next to Davis, but the story doesn’t end there. The Pelicans have played at a much faster pace than the Kings this season – 3.5 possessions per game, to be precise. Below, I set up a trend that matches games in which Sacramento’s opponent has played between three to four possessions per game faster than the Kings. The results are eye-opening:

Cousins has scored no fewer than 50.25 points in these 12 games, and if he had gotten a friendlier bounce on a couple of shot attempts, he’d be looking at 100 percent Consistency in addition to the impressive Plus/Minus:

Of course, Cousins played these games with that massive usage rate, so we can’t take these numbers at face value either.

Forecasting Cousins’ fit in the Pelicans’ offense is extremely difficult at this point, but here’s what we know:

In the end, it is going to come down to price adjustments. On DraftKings, where player pricing has generally been more responsive throughout the season, it’s possible Cousins’ price will be over-corrected initially as a member of the Pelicans. In his last game with Sacramento, Boogie cost $11,300, making him a fairly neutral value based on his average fantasy production. A lot will be said about Boogie’s usage decreasing, but don’t totally discount his move from the eighth-slowest paced team in the league to the sixth-fastest. We know Boogie excels in fast-paced games, and if the price drops too low, there will be a point where his salary is over-adjusted.

Over the past three seasons, Cousins’ average production in terms of total fantasy points per game has remained relatively consistent on DraftKings: He is scoring about 1.2 more fantasy points per game this season than he was in 2014-2015. But since his average salary has risen over that time, his average Plus/Minus and Consistency have both declined. Obviously, that doesn’t mean that we can’t roster Boogie anymore — we just need to be a bit more cognizant of his overall matchup now than in the past.

In the chart below, I break down Cousins’ fantasy production into raw production.

As you can see, Cousins is more reliant on scoring than ever before, while his rebounding numbers have declined over the past three seasons. Cousins is making up for that in 2016-2017 with career-high numbers in assists and 3-pointers.

The Kings are playing at a dramatically slower pace than they have in their recent history: After ranking eighth and first in total pace throughout the 2014-2015 and 2015-2016 seasons, the Kings are ranked 23rd in the same category so far this season. It’s a credit to Boogie’s talent that he is posting a career high in fantasy points per game in this offense. To understand why, one needs to look no further than his 36.7 percent usage rate, which represents a career high.

Cousins scores nearly five more fantasy points per game at home and exceeds salary-based expectations at a much greater consistency. This seems like a pretty good split to remember.

Boogie has struggled in the second half of back-to-back sets. In these games, he has posted a -1.63 Plus/Minus and exceeded salary-based expectations just 47 percent of the time. He is particularly bad when the second game is on the road: He has averaged a -2.10 Plus/Minus in these games. Cousins’ average ownership in the second half of back-to-back games (22.2 percent) is only two points lower than his baseline 24.1 percent ownership.

Whether Vegas designates the Kings as a favorite or underdog has been worth nearly 4.5 fantasy points to Cousins’ fantasy production:

This is another split that does not show up in ownership, as you can see by the near identical numbers above.

Unfortunately for Kings fans, Sacramento has been large dogs much more frequently than large favorites over the past three seasons, which is why I had to use eight rather than 10 on the favorite side.

Perhaps related to Cousins’ strong performance as a heavy favorite, he’s accumulated a +6.28 Plus/Minus in 34 matchups against teams whose winning percentage is 40 percent or worse. Cousins is somewhat of a bottom-feeder, a fantasy catfish:

When Cousins is both on the road AND an underdog, his Plus/Minus has been -0.10 over 65 games — a 3.4-point difference from his baseline +3.30 Plus/Minus. If there’s one situation to avoid Cousins, this is probably it.

As noted in the introduction, the Kings are playing at a much slower pace in 2016-2017. As a result, Cousins is going to find himself playing in more ‘pace-up’ games now than he has over the past few seasons. In games in which Sacramento’s opponent plays at least two possessions per game faster than the Kings, Cousins has thrived:

Finally, does Cousins tend to keep it a little too real on Friday nights to the detriment of his Saturday performance? I’m not saying, but I’m just saying . . .

FanDuel
Based on Cousins’ 2016-2017 average of 48.66 fantasy points per game, we would expect him to have an average FanDuel salary of $11,900. At the time of this writing, Cousins’ average salary on the year has been $10,500 and he has not exceeded $11,300. As a result, Cousins has exceeded salary-based expectations 75 percent of the time this season. While James Harden and Russell Westbrook have seen steady increases in salary over the course of the season, that hasn’t quite been the case with Cousins. Boogie is back in the mid-$10,000 range, down from the low-$11,000 range he reached just before the new year.

With Boogie off the court this season, the primary beneficiary has clearly been Rudy Gay, who has seen a massive 9.5 percent boost in usage in 800 minutes with Cousins off the court. Unfortunately, Gay is going to be out for an extended period of time with a torn Achilles. Looking past Gay, the biggest bumps have gone to the point guards, Darren Collison and Ty Lawson.

In 18 full games that Cousins has missed over the past two seasons, Kosta Koufos has seen the largest increase in Plus/Minus (+6.20). In the one game Cousins has missed so far in 2016-2017, it was Anthony Tolliver who received the most significant scoring bump.

Flipping things around, it is Sacramento’s shooters who benefit the most from having Cousins on the court: Tolliver, Ben McLemore, Omri Casspi, and Arron Afflalo all receive minor boosts in this scenario.

Surprisingly, Cousins has not played well with Gay off the court. Despite seeing a three-point increase in usage, Cousins sees a 1.2-point Plus/Minus decrease when extrapolated to a per-game average.

Below, I look at average production among Kings players during Cousins’ 10 best fantasy performances of the past two seasons, first on FanDuel and then on DraftKings. 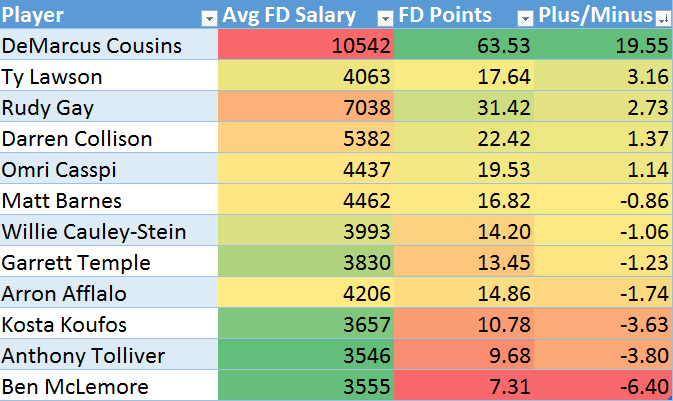 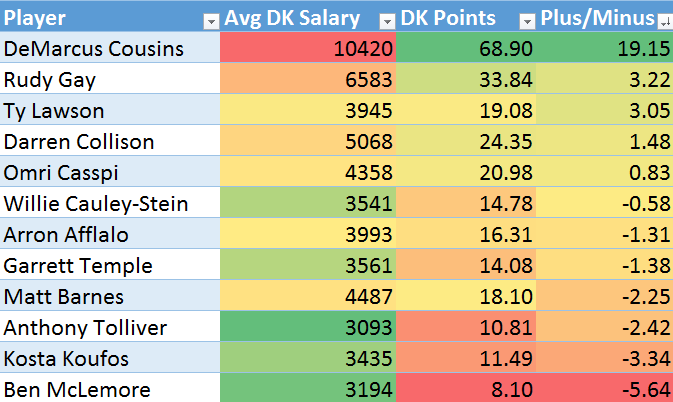 The performance of Cousins’ teammates in these games is actually pretty unimpressive. On DraftKings, Victor Oladipo had averaged a +9.11 Plus/Minus in Westbrook’s biggest games and Patrick Beverley had averaged +7.02 in Harden’s best games. Here, the highest score comes from Gay at +3.22, while several key rotation members are in the negatives.

One thing to note: The players who are a part of the Kings’ rotation have changed quite a bit over the past two years, and that could certainly be a factor here. Still, Gay and Collison have remained in the rotation (when healthy), and while they rate highly in comparison to their teammates, their overall scores have not been exceedingly impressive in Cousins’ best games.

When looking at all of Cousins’ games over the fantasy year, Collison has shown the highest correlation with Boogie:

While the other star players I’ve looked at have more-or-less crushed in all situations, Cousins is more of a matchup play, showing large splits in a few of the categories above. Although Cousins’ performance has tailed off as an underdog and on the road, his ownership in those instances does not dip much below his average ownership levels, making him a fade candidate in the right situations. Finally, while Cousins’ ownership is likely to spike in the coming games following Gay’s injury, this is not a situation that has led to increased fantasy performance in the past 20 games that Gay has missed.