What if James Harden were all defense, no offense? Thankfully, that nightmare plays out only in Adidas commercials. Harden has reformed his game in 2016-17, but not by improving as a defender. As the “point guard” in Mike D’Antoni’s turbo offense, Harden has elevated himself as a playmaker. Let’s take a look at what makes Harden a different beast in 2016-17.

In the following image, Harden’s yearly averages are broken down to show the percentage each raw statistic contributes to his overall fantasy production.

The biggest change in James Harden’s statistical profile in 2016-17 has been a relative decrease in points and a relative increase in assists. Harden’s 28.5 points per game (PPG) this year is the second-highest total of his career (2015 was his career high), yet he is averaging over eight more fantasy PPG in ’16-’17. That increase can be attributed mostly to James’ soaring assist totals. A lower reliance on points has also boosted Harden’s Consistency:

Let’s use our Trends tool to find out what makes Harden tick.

Home/away splits are often overlooked in NBA DFS, but several players have fairly pronounced splits in this category, including Harden. Over the past three seasons, Harden has averaged over four more DraftKings points per game when playing at home:

Even in his excellent start to the 2016-17 season, the home/away split remains:

Despite an average cost of $11,700 DK, Harden has failed to return value at home only four times this year. And even in those games he has not been bad: His low fantasy point total at home in 2016-17 is 46.75, which came on 10/30 against the Mavericks in a win in which Houston scored only 93 points as a team.

Harden is one of the scariest players to fade in NBA DFS right now, but if he’s to be faded it should probably be done when the Rockets hit the road, where he is exceeding his implied point total only 55.6 percent of the time at an average ownership of 23.9 percent.

Of Harden’s most frequent opponents, he has struggled the most when facing the Spurs and Grizzlies:

Harden has not fared well against the NBA Southwest Division as a whole. He has exceeded salary-based expectations against only the Mavericks over the past three seasons and his Consistency is at or below 50 percent against each divisional foe.

One commonality shared by the Grizzlies, Mavericks, and Spurs is that they all want to slow down the pace when playing against Houston. At the same time, Harden’s struggles likely have more to do with the divisional matchups than the pace, because Harden has been mostly fine in games in which the Rockets have faced non-divisional opponents who play at least two possessions per game slower:

Harden has most frequently victimized the Portland Trail Blazers and New York Knicks: 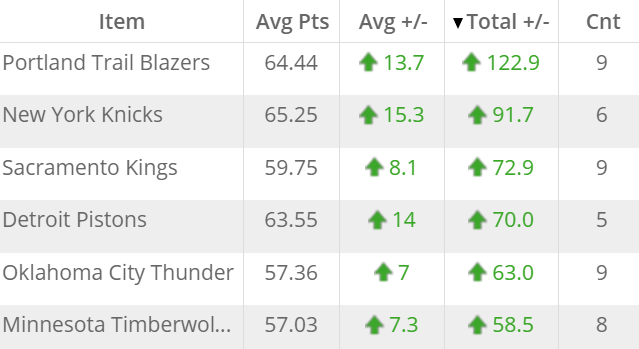 As expensive as Harden typically is on DK and FanDuel, it’s fair to wonder how he performs in blowout games, as it’s difficult for him to score the 50-60 points often necessary to justify his salary if his playing time is limited in the fourth quarter:

It turns out that Harden has thrived in games in which Houston is favored by 10 or more points. In this 27-game sample, Harden has gone over 70 DK points five times and never scored fewer than 37.5 points.

There are some NBA players who are risky options in projected blowouts, but Harden is not one of them.

Harden rarely shows up on the injury report. He played all 82 games in 2015-16 and missed only one game the season before that. We know that Harden is almost certain to play in back-to-back sets.

But how does he perform in this situation?

All players priced $5,000 or more on DraftKings have collectively posted a +0.25 Plus/Minus when playing in the second half of a back-to-back set. Harden has accumulated a +3.34 Plus Minus in 47 such games. Amazingly, this is an even better Plus/Minus than his personal baseline of +2.77 over the past three seasons.

Given the minutes Harden logs and the punishment he takes — according to NBA Stats, he draws over six fouls per game — it’s notable that Harden thrives in back-to-backs. As an added bonus, his average ownership of 15.5 percent in these games is significantly lower than his overall 24.3 percent ownership.

When Harden has cost no more than $11,500 in 2016-17, his Consistency has dropped to 60 percent. Eight of his 15 games in this price range have come against divisional opponents — led by four games against Dallas — so DK is smartly pricing him down in these matchups. Harden’s average overall cost on DK in the 2016-17 season has been $11,600.

Harden is rarely “off” the court. When he is, here are the players most likely to benefit:

Eric Gordon’s usage has gone through the roof in 362 minutes without Harden, shooting up to 32.8 percent, a number that would place him inside the top 10 overall at that category over a full season. That also helps explain Gordon’s December increase in both fantasy points and Plus/Minus once he had been moved to the Houston bench, where he could serve as the alpha dog on the second unit:

Trevor Ariza should not be overlooked when Harden is out. Although he does not see the same usage spike that Gordon does, his Points Per Possession score increases to 1.3, and he leads the team in Plus/Minus differential.

While it seems like Ryan Anderson would benefit in Harden’s absence, that has not been the case, at least so far. His usage increases only by 0.3 percent and his Plus/Minus differential is negative without Harden. (More on this later.)

Conversely, Harden receives the biggest bump in Plus/Minus when Trevor Ariza is off the court. There is one player who seems to help Harden when they share the court together:

Harden has seen a 3.1 percent usage bump and a +5 Plus/Minus differential when Montrezl Harrell is on the floor. That’s unsurprising, given Harden’s Correlations page, which shows that he has by far the strongest correlation with Harrell:

The other notable correlation for Harden is with Ryan Anderson. Per NBA Stats, of Anderson’s 171 field goals this season 80 have been assisted by Harden.

Here’s a look at how current Rockets have performed in Harden’s 10 best fantasy games over the past two seasons, first on DraftKings: 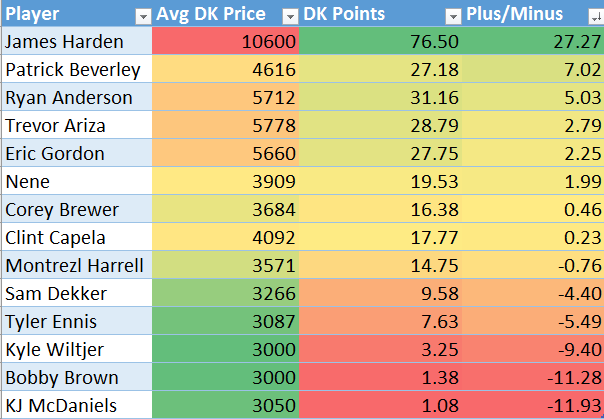 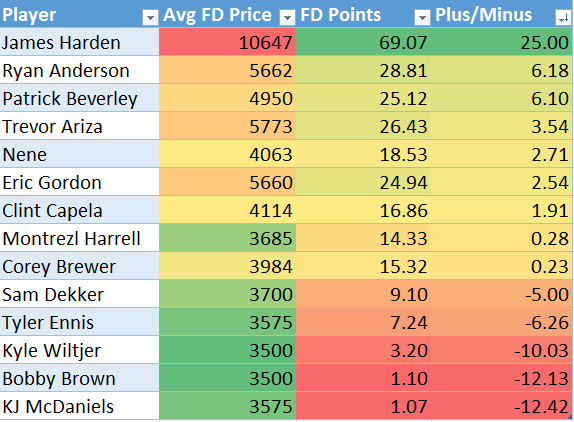 In these games, Harden has averaged Plus/Minus values of +25 FD and +27.27 DK despite exceeding $10,600 on both sites. Notably, every rotational player has a positive Plus/Minus in these same games. When Harden goes off, all the Rockets tend to do okay for themselves. Harrell’s low scores stick out here, but remember he didn’t enter the rotation until recently, so he was playing limited minutes in several of these contests.

Based on the above results, the top two-player stacks have been Harden-Anderson on DK and Harden-Beverley on FD. The top three-player stack on both sites has been Harden-Anderson-Beverley. I say “has been” rather than “is” because Plus/Minus takes player salaries into account, and pricing tendencies for any of these three players could change. It’s also possible that the top stack moving forward may involve Harrell, who has shown a positive correlation with Harden over the past few weeks.

As Harden goes, so go the Rockets. Given Harden’s average of 28 PPG, one might expect that his biggest statistical performances would come at the detriment of his teammates, but that has not been the case. Assists now make up a higher percentage of Harden’s fantasy production than ever before. As the primary scorer and ball-handler on one of the five fastest teams in the NBA, Harden is likely to continue to accumulate career-best numbers throughout the 2016-17 season.