The Chicago Bulls have been an absolute disaster this season. However, they have had one strong constant in Jimmy Butler. With Dwyane Wade now on the roster, Butler has moved to the small forward position after playing mostly shooting guard in previous seasons. That said, with a revolving door at point guard, Butler has been in charge of handling the ball a lot this season. At a position that has few elite options, Butler continues to be one of the top performers at the SF position.

In his second season as a full-time starter (2014), Butler had the best statistical year of his career. He had his best shooting year, hitting nearly 40 percent of his shots from the 3-point line and finishing the season with an effective field-goal percentage (eFG%) of 50.2 percent. In 2015, Butler saw his average minutes drop from 38.7 to 36.9, and his eFG% also dropped to 48.5 percent. Butler still finished with more average DraftKings points, but his Plus/Minus suffered due to a salary bump. This year, however, Butler has seen a rise in Plus/Minus value, and he is one of the few players on this team that is able to create offense as they struggle to find a consistent point guard. Butler has played plenty of minutes as the ‘point-forward’ this season, a la LeBron James and Giannis Antetokounmpo.

In the chart below, I break down Butler’s fantasy production into raw production.

As Butler has moved into a role that forces him to handle the ball more, he has seen a slight boost in his assists over the past two seasons. Other than his assists, his statistical categories have remained fairly constant over the past three seasons. While the Bulls are playing much slower in 2016 than they did in 2015, Butler has made up for the lack of possessions with a slight bump in scoring efficiency. He has also made up for the dip in pace with a career-high 26.8 percent usage rate – more than two percent higher than his 24.3 percent rate in 2015.

Butler doesn’t get much of a boost while playing at home, although he does see a slight Consistency and Plus/Minus bump while playing on the road.

Whether Vegas designates the Bulls as a favorite or an underdog has very little effect on Butler’s fantasy production:

While the numbers are very similar, it is interesting that Butler enjoys higher ownership when he is an underdog, even though he sees a very slight fantasy boost when he is a favorite. Again, though, it’s possible these minuscule differences could just be noise.

The split becomes noticeable only when Butler is a legitimate underdog, with an eight-point or worse spread:

Also, Butler’s +3.8 Plus/Minus as a favorite dips slightly when he’s a double-digit favorite:

Butler plays well against both good and bad NBA teams, although he does see a slight Plus/Minus boost against teams with a sub 40-percent win percentage.

The Bulls went from top-12 in possessions per game in 2015 to ranking in the bottom six in 2016. As such, Butler often finds himself in pace-up spots, which have been historically positive game-flow situations for him.

Based on Butler’s 2016-2017 average of 41.44 fantasy points per game, we would expect him to have an average FanDuel salary of $10,100. At the time of this writing, Butler’s average salary on the year has been $8,700 and he has not exceeded $9,800. While superstars like James Harden and Russell Westbrook have seen incredible increases in salary over the course of the season, Butler has yet to even crack $10,000.

When Butler has been off the court this season, the primary beneficiary has clearly been Dwyane Wade, who has seen a massive 8.1 percent boost in usage. The next largest beneficiary has been Nikola Mirotic, who has struggled to see minutes this season. He is averaging less than 23 minutes per game and has drawn only two starts. There are rumors that Mirotic is disliked in the locker room. Then again, on the Bulls, who isn’t?

In 17 full games that Butler has missed over the past two seasons, Bobby Portis has seen the most consistent increase in Plus/Minus (+1.20). In the two games Butler has missed so far in 2016-2017, rookie Denzel Valentine has received the most significant scoring bump.

Flipping things around, it has been Michael Carter-Williams who has benefited the most from having Butler on the court. Unfortunately, the Bulls don’t have a consistent point guard and it is difficult to predict who will benefit from dishing assists to Butler.

Jimmy has seen a huge Plus/Minus of +14.3 in four games that Wade has been off the court this season.

Below, I look at average production among Bulls players during Butler’s 10 best fantasy performances of the past two seasons, first on FanDuel and then on DraftKings. 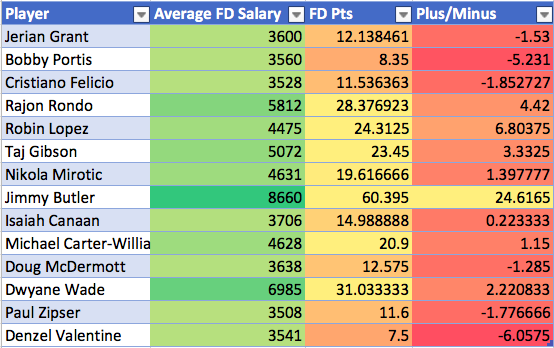 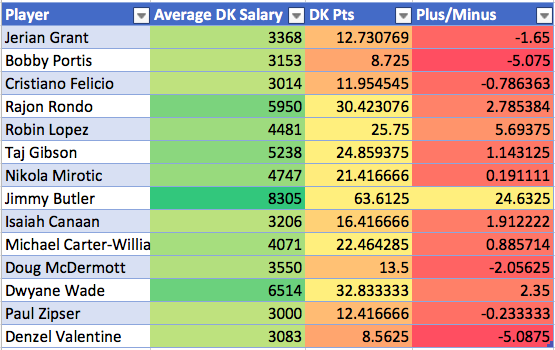 From the charts above, we see that when Butler goes off, his teammates struggle to find production. On DraftKings, Victor Oladipo averaged a +9.11 Plus/Minus in Westbrook’s biggest games and Patrick Beverley averaged +7.02 in Harden’s best games. Here, the highest score comes from Lopez at +6.80, while several key rotation members are in the negatives.

When looking at all of Butler’s games over the fantasy year, Mirotic has shown the highest correlation with Butler:

Butler has benefited from an increased usage rate this season. He has also been hurt by an additional high-usage star on the roster in Wade. While Wade is not the player he once was, we see that Butler is a much stronger fantasy producer with Wade off the court. That being said, the numbers show that Butler is largely matchup-proof. Further, he receives a small bump in value from pace-up situations and being on the road.