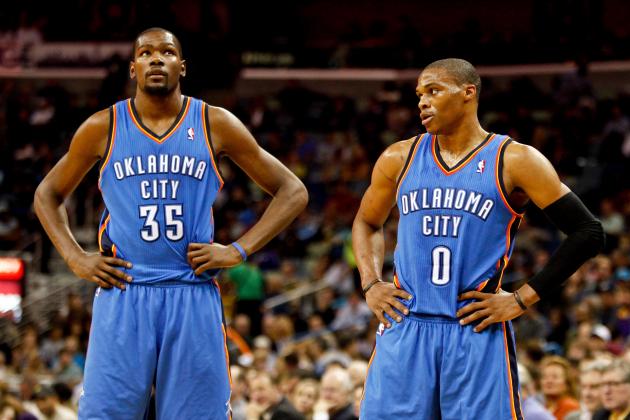 I’ve written about this in the past, but wanted to continually follow up on the idea and let it grow throughout season with incoming data. The topic is multi-player ownership, which is something I believe we don’t give enough thought when we construct our DFS lineups. Chris Paul might be 15% owned in a tournament and DeAndre Jordan might be 13% — in a vacuum, those players aren’t largely valuable in ownership-terms at those levels. However, depending on their ownership together, if they both go off, that could potentially be hugely valuable.

The recent example of this is Russell Westbrook and Kevin Durant. You’ll be told in many strategy articles around the web to avoid players – and especially the really high-cost stars – that are teammates because of their negative correlation. And while I’m not disputing the negative correlation at all, I think it’s a lot less important in tournaments than ownership. Is a Westbrook-Durant stack optimal? Probably not, but we aren’t really looking for optimal in tournaments; we’re looking for the winning lineup.

The more I study DFS, the more I think we should ignore correlations or “optimal” combinations in tournaments. Of course, wide receivers and quarterbacks in the NFL are so largely positive that it’s probably dumb in a sense to ignore them, but as we know about value, something is only valuable to us if both of the following are true:

If both aren’t true then it doesn’t matter to us. If it’s not valuable for scoring fantasy points, then obviously move on; but also, if everyone in the world already knows its valuable, then again it’s not worth anything. We want to find plays that hit both checkmarks, especially in GPPs – a lineup that has both a high ceiling and is contrarian.

Let’s look at some actual data. On that day that Westbrook and Durant both exploded for many fantasy points, they were both moderately owned in the large $3 DraftKings $300k Sharpshooter tournament. Westbrook was at 16.8% owned and finished with 76.75 fantasy points and Durant was at 7.9% owned and finished with 69.00 fantasy points. The winning lineup had them together and thanks to Greg Scharlach, I found that they were owned together in only 1.2% of lineups. In addition to winning that tournament, 87.7% of lineups with KD and Westbrook cashed.

On most slates, getting Westbrook and Durant in the same lineup will be very hard to do because of their price tags. However, starting to think about stacking and “negative” correlations is a step in the right direction, in my opinion, in figuring out how to find value that hits the checkmarks above. And remember, the goal of GPPs isn’t to score points; the goal of GPPs is to win the contest.