I know everybody is engulfed in football right now, but hey, the NBA season is right around the corner too! We will be debuting our models and trends for basketball shortly, but just to get back in the mindset, I’m going to give you a sneak peek at some of our filters while looking at everybody’s favorite NBA topic: blowouts.

The fear we all have is that once a game gets out of hand, one or both teams will pull their starters and we won’t get a full game’s worth of stats from the players we used. There is some merit to that line of thinking, and to prove it, here’s what happened to all players who played in games where the spread was 10 or more points:

The first interesting thing to note is that, while the other four positions didn’t do so well, point guards actually came out slightly ahead of the game. This kind of makes sense since on most teams, the offense flows through the point guard. If the team is out to a big lead, the PG has likely racked up a handful of points and assists just from being the primary ball handler.

It’s important to break down the results by salary as well. Using DraftKings’ salaries, value was mostly added up until about the $8000 level where the graph goes mostly red, outside of a few random spikes.

When I apply the trend filter, I see that players $8000+ performed 1.26 points below projections.

Let’s look at those results though. I’m used to working with football and baseball projections, so that 1.26 initially seemed like a lot. But considering the expected point total projection was 41.89, this actually only means that players underperformed compared to their projections by 3%. Not ideal, but probably not going to kill you either…you’re still getting 40.63 points on average from this group. Still, the goal is to pick players who will add value and most of the time, picking the most expensive players in games where the spread is 10 points or more is not going to get it done.

To visualize the results on a team level, let’s look at the Warriors. The Warriors were favored to win by 10 or more points an astounding 39 times last season. If you spent time in any of the DFS forums last season, you probably remember that people were afraid Golden State was going to blow out their opponent and sit their starters pretty much every night they were playing. Excluding Curry though, the other rotation players were all able to add value, even when the game was likely to get out of hand: 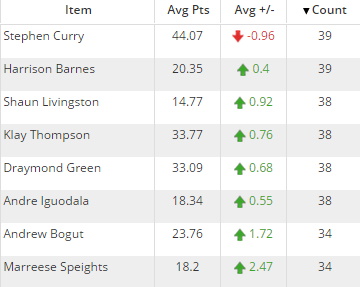 Klay and Draymond were often priced in the $7k range on DraftKings and were able to clear value at that point. When their prices crept up to the $8k level, bad things happened:

A DraftKings price in the $7500 range carries a point expectancy around 33. I think a high twenties or low thirties total is attainable for most starters when their offense is rolling, even if they don’t play all or most of the fourth quarter. What we are seeing though is that once we get up around the $10500 range, the implied total is very hard to meet without having the benefit of a full game’s worth of minutes.

Overall, I don’t necessarily think you need to avoid blowouts – you just need to be aware of the likely outcomes. I might even argue that being a heavy favorite in NBA raises a player’s floor. I think most of the time though, you’re going to want to look elsewhere for a premium player with 60 point upside.

It also probably depends on the coach. On the season Steph Curry only averaged 32:30 minutes per game. Depending on game flow, you ran a real risk of Steph not clearing 30 minutes on a given night. On the other hand, there are players like Jimmy Butler and James Harden, who were closer to the 37-38 min/game range and often stayed on the court longer even when comfortably ahead.