Game of the Day: Houston Rockets at Chicago Bulls

This game has the highest Vegas total of the slate at 223.5 points, and the Rockets are five-point road favorites over the Bulls.

If you use the Trends tool to see how the Rockets performed in their first meeting against the Bulls, you’ll find some huge numbers:

However, that game went into overtime, and it also didn’t include Lou Williams, who has since come to Houston and wrangled usage away from many of his teammates. James Harden especially has posted a negative DraftKings Plus/Minus in the six games since Lou came to town.

That said, Harden has actually exceeded salary-based expectations in each of his last three outings, which have all come in brutal matchups against the Jazz, Spurs, and Grizzlies.

His usage rate will get back up — he’s been above 20 field goal attempts in his past two games — and he may carry low(er) ownership for at least the next couple of games while people still worry about the Lou situation. (After lineups lock, Pro subscribers can review Harden’s ownership via our DFS Ownership Dashboard.)

As you can see in the image above, the Houston big men haven’t missed a beat since the All-Star break. Clint Capela has been excellent lately, scoring 38.0 DK points in 31.7 minutes and exceeding salary-based expectations in six of his last seven games. And poor Nene just can’t seem to get an increase in salary: Despite exceeding salary-based expectations in nine of his last 10 games and averaging a +6.40 Plus/Minus, he remains just $3,600 on DK, where he has a 95 percent Bargain Rating.

Again, that first game between these two teams has no predictive value for today. Just look at the Bulls: Jimmy Butler didn’t even play, and Taj Gibson and Doug McDermott were still on the team. Since that trade, the Bulls just haven’t been very good: Despite taking down the Cavs and Warriors over the last two weeks, they’ve lost their other four games in that span. Per our On/Off tool . . . 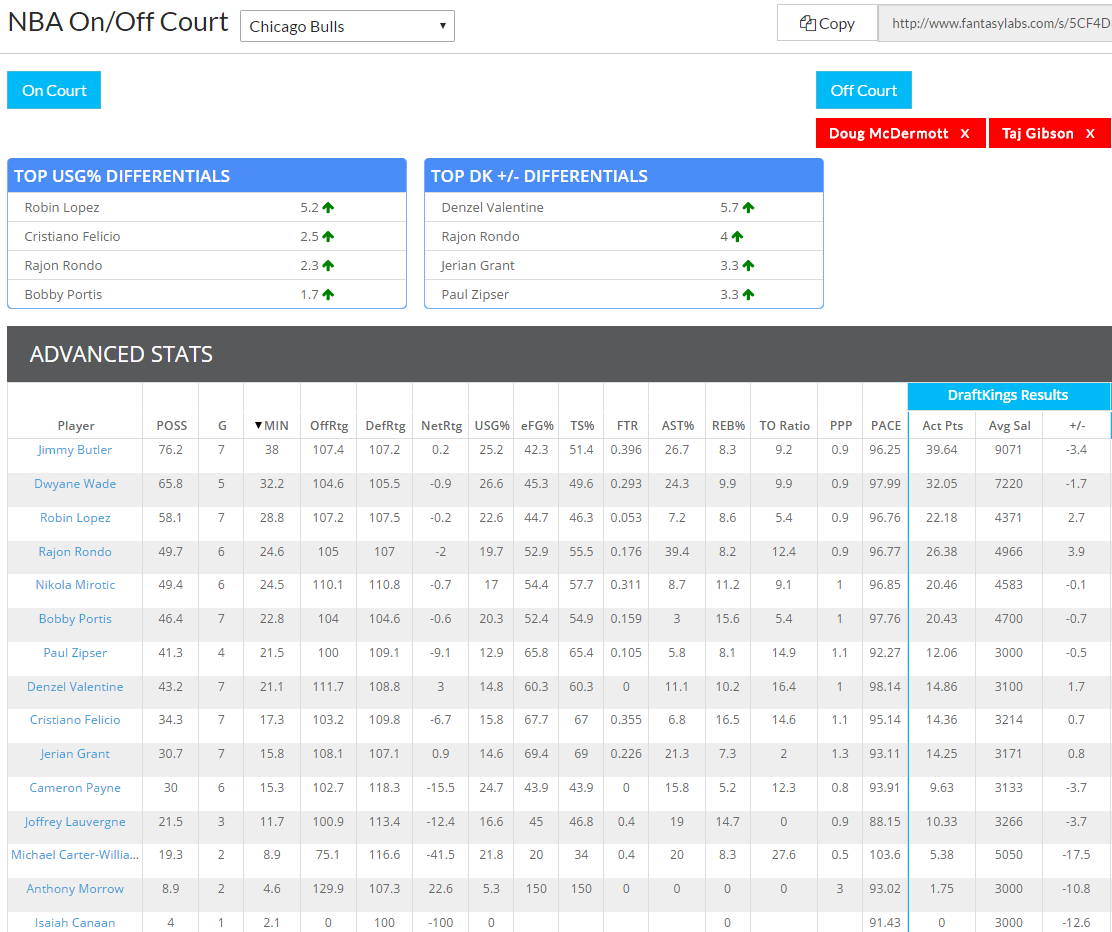 . . . we see that the top guys, Jimmy Butler and Dwyane Wade, have posted DK Plus/Minus values of -3.4 and -1.7. Robin Lopez has seen a nice bump in value without those two big men, and Rajon Rondo has been sneakily good:

However, the two studs with high ceilings have been disappointing. That said, this is a solid pace-up game for the Bulls, and Butler is a really nice value at $9,100 on FD, where he has a 90 percent Bargain Rating and 15 (!) Pro Trends (accessible for Pro subscribers in our Player Models).

One other guy to consider is Joffrey Lauvergne, who got up to 28.9 minutes on Wednesday versus the Magic and finished with 23.5 DK points. He certainly has a limited ceiling and low floor, but he can’t be ignored at the bare minimum $3,000 on DK if he’s going to play 25-30 minutes again, especially against a Rockets team that has been a bottom-10 squad versus big men this year:

Isaiah Thomas has been really up and down lately . . .

. . . but today he gets the Denver Nuggets, who have been by far the worst team in the league this season against opposing PGs:

Thomas played them already this season, and he finished with 39.25 DK points.

That won’t be enough to hit value on his now-elevated price tags of $8,700 DK and $9,200 FD, but he’s definitely worthy of rostering because of how PGs have dominated Denver.

Kemba Walker has been outstanding of late, exceeding salary-based expectations in nine of his last 10 games and averaging a +7.75 DK Plus/Minus over that time.

He has taken at least 20 shots in each of his last four games and hasn’t scored fewer than 26 real points since 2/25 against the Kings. Today he gets an Orlando squad that has disappointed defensively this year, ranking only 21st in defensive efficiency and allowing 107.0 points per 100 possessions. Kemba did struggle against the Magic in their first two meetings this year . . .

. . . but both of those contests were back in 2016 and may not be representative of what Kemba can do with high usage. He’s at home, where he’s been excellent this season:

Speaking of being awesome at home this year: Ricky Rubio certainly qualifies . . .

He has exceeded salary-based expectations in nine of his last 10 games and averaged a ridiculous +9.55 DK Plus/Minus over that time. He’s had nine or more assists in each of his last six games, and he’s even dominated against tough competition: His last three games have come against the Clippers, Spurs, and Jazz. He’ll have another tough matchup today against the Warriors, who rank second in defensive efficiency and allow just 101.5 points/100, but Rubio has shown recently that this new-look version of the Wolves can compete with the best.

The Wizards continue to play a very tight rotation, and Bradley Beal has continued to excel:

He has exceeded salary-based expectations in seven of his last 10 games and averaged a +5.15 FD Plus/Minus over that time. He gets a post-DeMarcus Cousins Kings team tonight that still plays slowly . . . 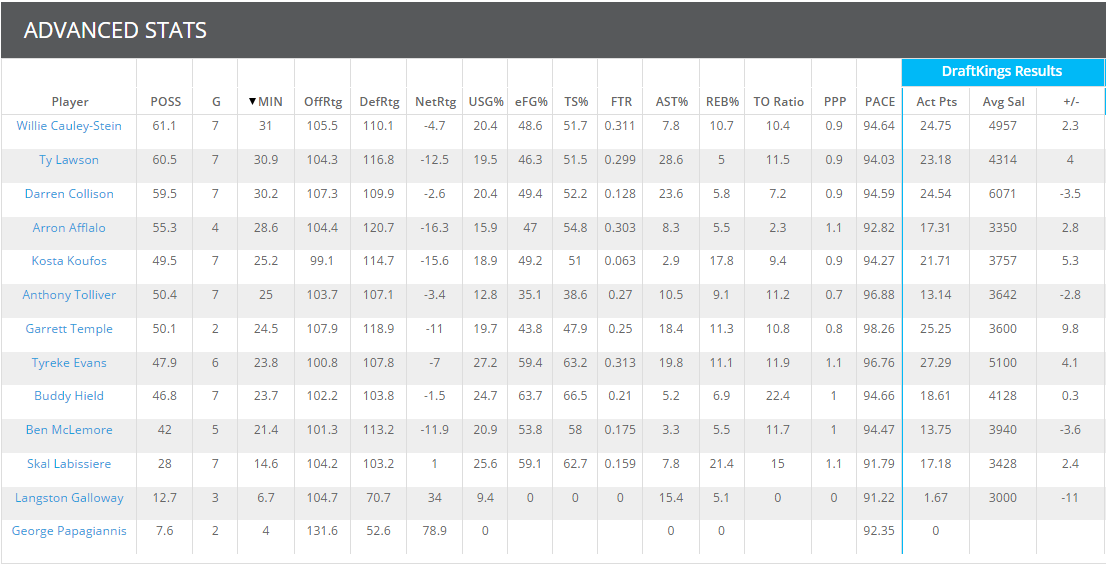 . . . but will likely use some combination of Arron Afflalo, Tyreke Evans, Buddy Hield, and Garrett Temple (via our Matchups tool). 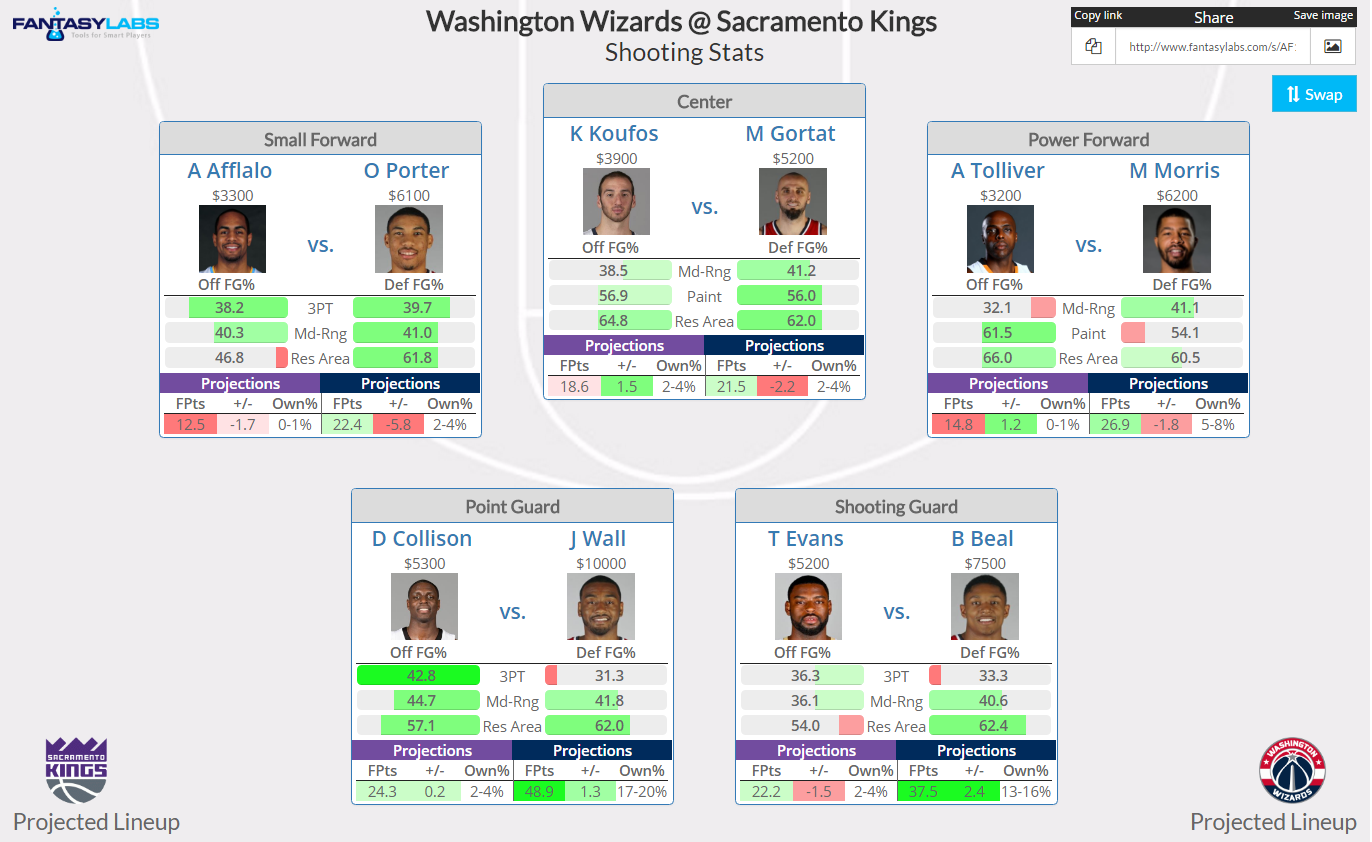 None of those guys are very good defensively, and the Kings rank 24th in defensive efficiency, allowing 108.5 points/100. Beal is a safe play with 10 and 11 Pro Trends on DK and FD.

Avery Bradley and Evan Fournier are comparably priced at $5,500 and $5,600 on FD. Bradley got his minutes limit raised to 30 on Wednesday and finished with 23.7 FD points on 15 field-goal attempts against the Warriors. That’s not amazing production, but today he gets the Nuggets, who rank eighth in pace on the year, averaging 100.4 possessions per 48 minutes, and dead last in defensive efficiency, allowing 110.8 points/100. Denver has been a little better against SGs than PGs, but overall they’ve been pretty bad against both:

Fournier’s status all depends on whether Nikola Vucevic returns to the lineup: Vuc has missed the last three games with a sore right Achilles and is questionable for today’s contest against the Hornets. Fournier has thrived in his absence so far:

Both guys are cash viable if Vuc is out, but definitely pivot to Bradley if he’s able to suit up.

Also, Seth Curry isn’t too far above them in price ($6,200 FD), and he’s had perfect Consistency over the last 10 games.

Paul George may or may not have “found his shot again,” but he seems to believe he has. He’s definitely increased his usage rate lately:

Butler will likely be the chalkier play of the two highest-priced SFs, but George is an intriguing pivot in guaranteed prize pools against a Milwaukee team that ranks 20th in defensive efficiency on the year, allowing 106.7 points/100. George has been really bad against the Bucks this year . . .

. . . but that could also keep his ownership down in GPPs. If he’s aggressive, he can certainly take advantage of a Bucks squad that has struggled to defend the rim of late.

There’s a huge pace discrepancy between the Nets, who rank first in pace, and the Mavericks, who rank dead last in pace. The difference between the two teams is exactly 10 possessions per 48 minutes, which doesn’t happen very often. Instead of using that for a trend, I’ll lower our “paceD” filter to just eight.

In these situations this year, Harrison Barnes has thrived, averaging 37.05 DK points and a +5.30 Plus/Minus and exceeding value in all five games. He has a +3.85 Opponent Plus/Minus on FD, where he’s too cheap with a 93 percent Bargain Rating.

As I seem to mention in every NBA Breakdown, targeting guys with high FD Bargain Ratings is encouraged:

If you need to punt at the position, Terrence Ross remains in play if Vucevic is out. He hasn’t been very efficient lately in terms of fantasy points per minute . . .

. . . but he’s yet to dip below 30 minutes since joining the Magic, and that’s hard to pass up at only $4,500 on FD, where he has a 98 percent Bargain Rating. Despite the uninspiring performances of late, he’s still been very valuable overall in Orlando. At that price point, he needs relatively little production to hit value.

Paul Millsap remains criminally underpriced on DK, where his $7,400 salary comes with 13 Pro Trends and an 86 percent Bargain Rating. He’s not a super high-ceiling type of player, but he’s an excellent cash-game option because of his Consistency: He’s exceeded salary-based expectations in six straight games and has averaged a +2.03 Plus/Minus over his last 10.

He does have a tough matchup against Serge Ibaka and the Raptors . . .

. . . but he did just put up 20-10 on Draymond Green and the Golden State Warriors. With the low price point, the matchup risk is minimized.

Marvin Williams continues to play very well, putting up 40.0 DK points in 36.6 minutes of action Wednesday against a top-five Heat defense. He’s exceeded salary-based expectations in seven of his last 10 games and has averaged a +4.03 Plus/Minus over that time frame.

He has played stable minutes due to the injures to Frank Kaminsky and Miles Plumlee, both of whom remain out tonight. Backup center Johnny O’Bryant is also out tonight with a sprained right ankle, which means that Marvin, Cody Zeller, and Christian Wood will essentially be the only big men available. Marvin is certainly in the cash-game mix on both sites against an Orlando team that ranks 21st in defensive efficiency, allowing 107.0 points/100.

Be careful to monitor the Denver situation tonight. Kenneth Faried remains out, and Danilo Gallinari and Nikola Jokic are currently questionable to play. They both missed Wednesday’s game versus the Wizards, and Juancho Hernangomez received the start and put up 23.3 FD points in 28.95 minutes of action. He’s not playable if Gallo is in, but if he’s ruled out (and he’s reportedly dealing with vertigo lately) then Hernangomez will likely get the start and play close to 30 minutes at near minimum salary on FD ($3,600). Hernangomez is viable without Gallo:

For many of the reasons listed in the Marvin section above, Cody Zeller should be a chalky value option tonight. He’s only $5,100 FD and will be the only center on the roster available outside of Wood. He jumped way up to 42.2 minutes on Wednesday versus the Heat, and he will likely have to go 35-plus tonight against the Magic. Orlando has been the sixth-worst squad this year against opposing centers . . .

. . . and Zeller could put up a nice game, especially if Vuc is able to play and Zeller avoids 30-plus minutes of Bismack Biyombo. 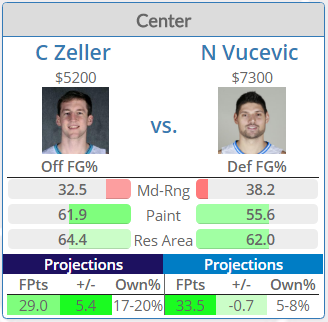 As is the case with Hernangomez, Mason Plumlee is a nice target if Jokic is unable to go:

We may not know status updates before lock, which takes the Denver guys out of cash-game consideration but increases their GPP appeal.

The expensive Karl-Anthony Towns has an absolutely brutal matchup against the second-ranked Warriors defense, but he’s at least at home, where he has very significant splits this season:

And he has very positive correlation with Rubio, who has crushed lately (see above):

Given the likely chalkiness of Zeller, Capela, and Plumlee if Jokic sits, paying up for KAT in a perceived bad matchup could lead to unique lineups in GPPs.