The center position in daily fantasy basketball is quickly becoming a two-horse race between DeMarcus Cousins and Karl-Anthony Towns. On FanDuel, where only one center may be rostered (assuming Switcheroo rules are not in effect), the last center other than Cousins to exceed $10,000 before KAT was Andre Drummond way back on 11/20/2015. KAT has recently joined the $10,000 club and figures to stay a while. We know what Cousins is capable of, but what about KAT?

In 2016-17, KAT is lucky to play for arguably the best (fantasy) basketball coach of all-time, Tom Thibodeau. We know that Thibs is going to play his guys as many minutes as they can handle, and maybe even more than that. As DFSers, we can’t ask for more. In addition to enjoying a four-minute-per-game jump in playing time this season, KAT has added nearly five points per game in scoring and over one assist per game as a playmaker.

In 2016-17, KAT has some of the most impressive home/away splits you will see. On some level, it makes sense that a young player may feel more comfortable playing at home, but does that really justify a split as large as the following (on FD)?

The obvious counterargument here is that KAT was actually better on the road in 2015-16, his rookie season:

As a team, the Wolves had a higher winning percentage, scored more points per game, and played at a faster pace in road games in the 2015-16 season. In 2016-17, the opposite is true. Notably, Minnesota is averaging 3.6 more points per game when playing at home this year. Whether KAT’s splits are driving the team’s or the team’s splits are driving KAT’s is something of a chicken-or-the-egg question.

Whatever the case, the public seems to have caught on: On average, KAT receives an ownership boost of eight percentage points when he is playing at home. If KAT’s home/away splits eventually regress to the mean — and that’s possible based on last season — he represents an opportunity in large guaranteed prize pools.

Under Coach Thibs, the Wolves have slowed down the pace in the 2016-17 season. After ranking 16th in 2015-16, they are 23rd in pace this season. This presents KAT with the opportunity to play in more “pace-up” games in 2016-17. In the below table, I’ve broken down KAT’s performance based on the pace differential between Minnesota and opponents: 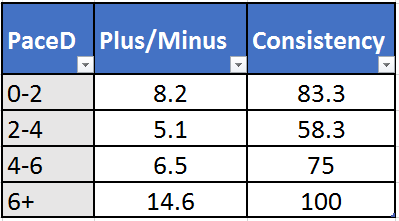 When KAT has played in a game with a pace differential above +6, he has averaged a +14.6 Plus/Minus on 100 percent Consistency. Before we get too carried away, that sample consists of only three games — vs. Brooklyn, at Phoenix, and vs. Denver. Despite the small sample, the initial results are hard to ignore, especially when taken in the context of KAT’s other pace-up games. For reference, KAT’s baseline Plus/Minus in 2016-17 has been +5.21 on 68.1 percent Consistency.

Whether or not the Timberwolves are implied to win by Vegas has been worth . . .

. . . not a whole lot, really. KAT has averaged an identical +4.3 Plus/Minus as a favorite and a dog. He averages more raw fantasy points as a favorite, which indicates that he is slightly more expensive in these games. He also has more ownership in these instances.

That doesn’t mean KAT’s fantasy production is completely Vegas-independent. Here’s what happens when the Wolves’ Vegas Score Percentile is 90 or better:

Back-to-backs have not negatively impacted KAT during his first two seasons in the NBA. KAT’s highest Plus/Minus score appears in the dreaded 2A group, which represents the second game of a back-to-back set played on the road. As an added bonus, the next time KAT is inactive for a Wolves game will be the first time, so there is little concern he will be rested in these situations.

KAT has become much more expensive on DraftKings over the course of the season. Reaching a low of $7,900 on November 3rd, KAT now typically costs $10,100-$10,800. Based on his season average of 47.31 fantasy points, we would expect him to have an average cost of $9,900. KAT’s overall average cost in 2016-17 has been $8,900, but the days of buying him at that price point are probably over. Weighing his average fantasy production on the season, KAT is probably a bit overpriced right now on DK. Anytime KAT’s salary exceeds $10,000, he will need better-than-average production to return value.

As mentioned above, KAT has not yet missed a game in his pro career. We don’t have any data to determine who benefits when KAT is inactive. When KAT is off the court, however, the results are clear:

Excluding Ricky Rubio, each of Minnesota’s other starters receives a large boost in usage rate and Plus/Minus with KAT on the bench. Andrew Wiggins benefits the most with double-digit boosts in both categories. If Karl-Anthony Towns ever misses a game as a Timberwolf, play Wiggins (and consider the other guys too).

Perhaps ironically, KAT loses value when Rubio is off the court. In this scenario, KAT loses 2.1 points from his average Plus/Minus despite generally playing at a faster pace. This makes intuitive sense as the Wolves are replacing Rubio (an experienced, pass-first point guard) with either the rookie Kris Dunn or Zach LaVine, who is more of a combo guard than a pure point guard like Rubio.

Additionally, KAT also shows negative splits when any of Wiggins, LaVine, and Gorgui Dieng is off the court. You would think that when one of the Wolves’ better offensive players is out, more usage would leak towards KAT, increasing his totals, but that has not been the case.

One explanation here may be the sheer amount of minutes Coach Thibs allocates to his starters. Per NBAWowy, the lineup Rubio-LaVine-Wiggins-Dieng-KAT has logged 850.5 minutes this year, nearly 700 more than the next combination. This group is familiar with each other, and when the Timberwolves are producing this is the group that tends to be on the court.

Below is the average production among Timberwolves players during KAT’s 10 best fantasy performances of the past two seasons, first on FD and then on DK. 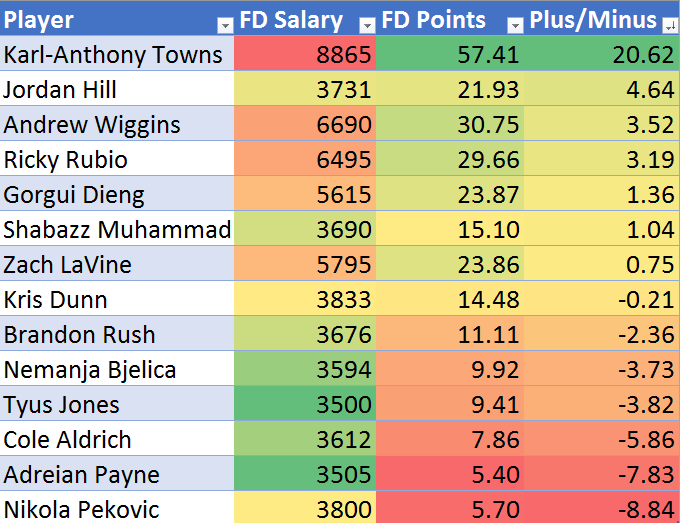 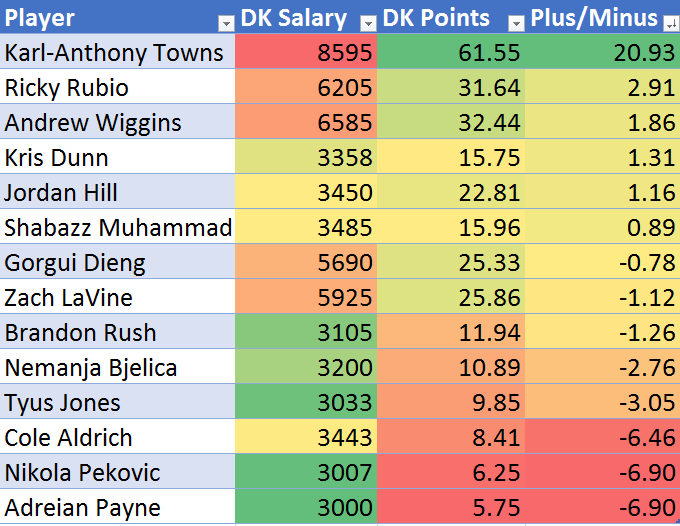 On DK, the results are even less promising. LaVine and Dieng both have NEGATIVE Plus/Minus values in Towns’ best games while Rubio leads the way.
Both result sets considered, Towns is probably best as a standalone option in GPPs, but he can be used alongside either Wiggins or Rubio in the right spots.

KAT’s correlation tab — showing performance in all games this season — mirrors the trends we’ve seen in his best games:

KAT got good fast, which has led to a soaring price on both DK and FD. Based on the above data, KAT may be marginally overpriced at his current salaries, as his average fantasy production does not meet his salary-based expectations. That doesn’t mean that he can’t be rostered above $10,000. It just means that KAT should be rostered judiciously, when Pace Differential and Vegas Score are in his favor.

NBA Vegas Report: The Most Misvalued Offenses and Defenses