Paul George suffered one of the more gruesome broken legs you’ll ever see back in August of 2014, but he recovered better than anyone could have hoped for and he’s back to being among the league’s best forwards. He’s arguably been better after his injury, as Larry Bird’s quest to get George to play more power forward has helped him set three-year highs in rebounds and points over the past two seasons. George’s two-way skills make him a unique fantasy asset, and his ability to impact games on both ends of the court have resulted in him averaging 37.8 DraftKings points per game this season.

George played in just six games during his injury-shortened 2014 season. He averaged a career-high 23.1 points per game last season, although his scoring has dropped this season despite him shooting a higher percentage from everywhere on the court. The issue has come at the free throw line, where George has averaged 1.8 fewer attempts than he did last season. George has also averaged 0.9 and 0.8 fewer rebounds and assists per game, respectively, this season.

George has managed to play well both at home and on the road over the past two seasons:

Per our Trends tool, we see that George has actually averaged more points as a visitor since 2015. Still, he’s played just fine at home, and he’s surpassed his implied point total 52 percent of the time wherever he’s played.

George’s performance at home this season contradicts his prior two-year averages:

George has averaged 3.18 more DK points at home this season and has clearly been more consistent at Bankers Life Fieldhouse. Still, George’s -0.7 Plus/Minus on the road is far from abysmal, and he was averaging more points per game on the road as recently as last season. He’s played better at home this season, but that’s come with higher ownership. Per ESPN, George’s home/away splits haven’t been very severe, and the resulting differential could be more of a result of him playing in three more road games at this point in the season than anything else:

Don’t be afraid to play George away from home, especially in guaranteed prize pools (GPPs), where his reduced ownership will be an advantage.

We see a similar story with George’s splits as a favorite or underdog, as his performance this season doesn’t quite fit into what we’ve seen from him over the past two years:

George has performed better as an underdog over the past two seasons, but he’s been better as a favorite through 62 games this season:

Once again, the splits contradict each other, but the difference isn’t severe enough to force any major takeaways. Rather, we see that George has more or less performed just fine as both a favorite and an underdog. This is still an important point, as the public appears to have undervalued George during road games and as an underdog.

Our next trend gives more fuel to the idea that George has performed up to his usual standards during suboptimal situations:

Per our Trends tool, he’s posted a +1.25 Plus/Minus with 54.5 percent Consistency and has averaged 41.9 DK points during his 44 games against opponents with a win percentage of 60 percent or higher over the past two seasons. The Pacers were underdogs during 32 of the 44 games in this trend’s sample size.

George has struggled to consistently reach value against the league’s bottom-dwellers:

He’s surpassed his implied point total during just 16 of his 41 games against opponents with a win percentage of 40 percent or lower. The inconsistency and two-season sample size from George don’t make any of his trends slam dunks, but we’ve now put together a decent amount of evidence that he’s more than capable of putting up his usually excellent performance in suboptimal situations.

George’s salary has been more volatile on FanDuel this season. He’s reached a low of $7,000 and a high of $9,500. After dropping below $8,000 for the first time in months, George’s salary has recently returned to the $8k club. His season-long average of 34.91 FD points per game implies he should be priced at $8,400, so it’s fair to say he’s been underpriced on FD during recent weeks.

Per our On/Off tool, several key Pacers have benefited when George has left the court:

Rodney Stuckey and Jeff Teague have taken on larger roles in the offense when George has sat. The extra usage has been great for their DFS value, as both players have posted a Plus/Minus above +4.0. Stuckey and Teague aren’t the same caliber players as they were in years past, but it’s clear they still have the ability to impact games, and that opportunity has presented itself when George has left the court.

George’s presence on the court hasn’t led to much value for any of his meaningful teammates:

Joe Young, Georges Niang, and Rakeem Christmas have all averaged fewer than eight minutes per game this season. Lavoy Allen has averaged fewer than 15 minutes per game. The Pacers have tried to find a star to complement George during recent years, but the results have been underwhelming thus far. Throw in the fact that George has failed to ever average more than 4.1 assists per game in a season, and we see that he hasn’t exactly made a lot of his relevant teammates better DFS options.

Still, George is clearly the Pacers’ best player, and he’s become more involved in the offense when some of the team’s key players have sat. Specifically, George’s usage has seen a solid bump when Teague or Myles Turner are out:

George hasn’t seen much of an increase in his DK Plus/Minus differential when Teague has sat, though George has crushed when Turner has sat. The absence of the team’s starting center appears to have opened up the court a bit for George and Stuckey, two athletic wings who have benefited from the increased spacing.

Below is the average production for the Pacers during George’s 10 best fantasy performances of the past two seasons, first on FD and then on DK. 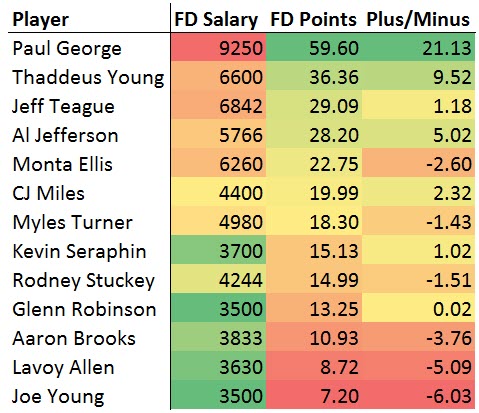 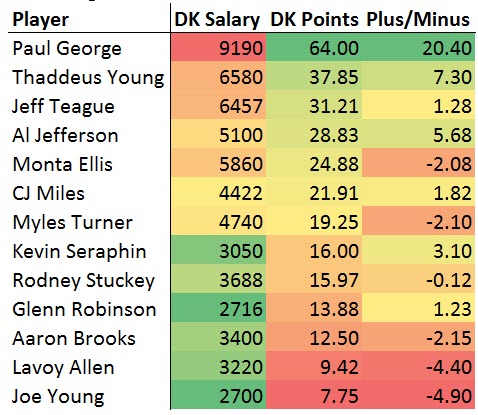 Thaddeus Young has clearly been the best stacking partner for George during his 10 best fantasy performances of the past two seasons. Al Jefferson has provided the second-most value, but he’s averaged fewer than 15 minutes per game this season and isn’t as involved in the offense as Young. Stacking George with Miles or Teague hasn’t been a bad idea, though both players have only moderately surpassed their implied point totals during George’s best fantasy performances.

It seems like just yesterday George was battling LeBron James and the Miami Heat in the Eastern Conference Finals. In reality, it’s now been three years since we’ve seen George go to war with the league’s elite. Still, he’s proven to be a similar player even after his leg injury, and he’s taken on a larger role in the offense than ever before thanks to the Pacers’ talent-deprived roster.

George’s splits have varied over the past two seasons, but he’s remained solid under most circumstances. This means that he’s performed up to his standards during suboptimal situations that include games on the road, as an underdog, and against elite competition. Look to feature George with Young, as they’ve crushed together during George’s biggest fantasy performances of the past two seasons.