Here’s where they place within our Week 11 fantasy football rankings (as of Tuesday evening).

Lamar Jackson: Baltimore Ravens vs. Tennessee Titans (Off the Board)

As of writing (Tuesday evening for this particular blurb), this game is off the board because the Ravens have announced that they will not host fans this weekend.

After consulting with the offices of Maryland Gov. Larry Hogan and Baltimore Mayor Bernard “Jack” Young, in addition to public health officials – including MedStar Health – the decision has been made not to host fans for Sunday’s game against the Titans.https://t.co/pk7eTVcTZM pic.twitter.com/cCGEoAMMbu

When this game was bettable, the spread was Ravens -6.5 and the over/under was 49.

This main slate is rather naked at quarterback.

The top half of the quarterback ranks are thin, so Jackson really stands out at the position.

And he’s No. 19 with 19.1 expected fantasy points per game (per RotoViz NFL Player Statistical Summary).

In every way possible, Jackson has regressed this season. Year over year, he has seen significant declines in his passing and rushing fantasy points over expectation per attempt (paFPOEPA and ruFPOEPA, per RotoViz Screener).

On average, each time Jackson attempts a pass or rushes the football, he underperforms relative to the outrageous marks he set last year.

But here’s the thing: Jackson is not playing poorly. He’s still exceeding the league-average efficiency expectations of the position.

Since becoming a starter in Week 11 of 2018, Jackson has been no worse than a fantasy QB2 in every game (per RotoViz NFL Stat Explorer). 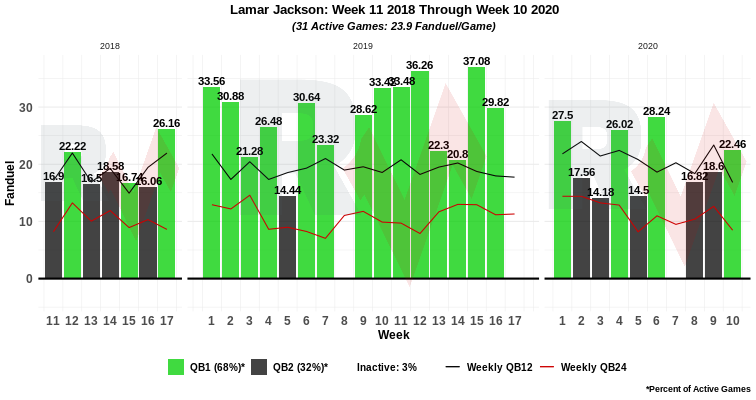 In 68% of his starts, Jackson has been a fantasy QB1. That number is incredibly elite. With his rushing ability, Jackson has a nearly unrivaled ceiling/floor combination.

At a glance, Jackson has a tough matchup against the Titans, who are No. 2 with a 73.0 coverage grade (per Pro Football Focus). A few weeks ago they added All-Pro slot defender Desmond King II via trade, and No. 1 cornerback Adoree’ Jackson (knee) looks like he will return to action this week.

Plus, the Titans played on Thursday Night Football in Week 10, so they should be especially rested and prepared on defense.

But I’m not worried about the matchup.

There are almost no quarterbacks truly comparable to Jackson, but the past four high-end dual-threat quarterbacks to face the Titans have done well as a cohort — and the group includes Jackson (going back to the 2019-20 playoffs).

Jackson should produce in this matchup.

In the interest of full transparency: I’m betting against the Ravens.

The Titans are a road dog off a loss, which I think the sports-betting public tends to undervalue. This year, road dogs off a loss are 27-20 against the spread (ATS), good for an 11.2% return on investment (ROI, per our Bet Labs database).

And as great as the Ravens are, opponents are actually 11-5 ATS (33% ROI) against them when Jackson is a home favorite. You can bet on this game at FanDuel.

But none of this means I’m fading Jackson in fantasy, especially since he’s on the positive side of his career favorite/underdog splits (per our FantasyLabs Trends Tool).

Throughout our entire FantasyLabs database, no quarterback with double-digit starts as a favorite has been more productive in that situation than Jackson.

He leads all quarterbacks in our Models with his median and ceiling projections.

Jackson is a locked-in keep-the-faith QB1 in season-long leagues and the unanimous No. 1 option in our Models for FanDuel.

For this blurb, I’m incredibly tempted — extraordinarily tempted — to write this and only this:

Herbert is a +125 Offensive Rookie of the Year frontrunner at DraftKings, and the Jets are dead last in the league with a 34.0 PFF coverage grade, emphasis on “dead.”

You know what? Screw it. That’s the blurb. That really is all you need to know.

In every game but one, Herbert has been a fantasy QB1. 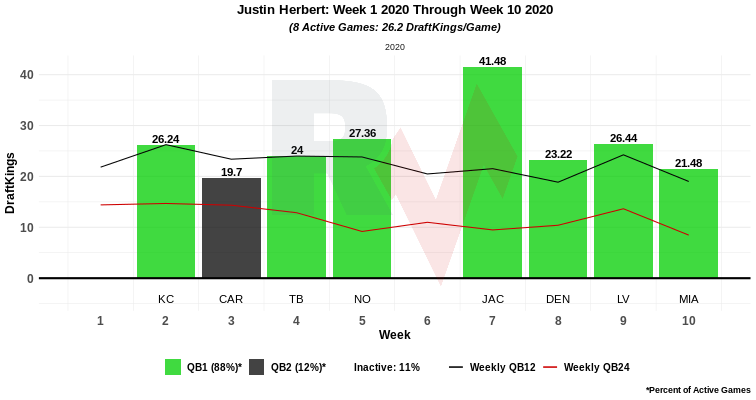 Herbert is a mid-range QB1 in season-long leagues and the No. 1 quarterback in the SportsGeek Model for DraftKings, where he has a position-high seven Pro Trends.

Joe Burrow: Cincinnati Bengals (+1.5) at Washington Football Team (Off the Board)

The total for this game is off the board because the Footballers are dealing with a COVID situation.

The Washington Football Team is in intensive protocols after a player tested positive for COVID-19. pic.twitter.com/meDD7VEkFP

Even so, this game is expected to play.

Burrow is popping in our Models for the fourth time in seven games, and it’s not hard to see why.

With the exception of his divisional road losses to the Ravens and Steelers in Weeks 5 & 10, the No. 1 overall pick has looked good for a rookie.

With five 300-yard passing performances, Burrow is tied for No. 1 in the league and has been no worse than a mid-range fantasy QB2 in every game but one. 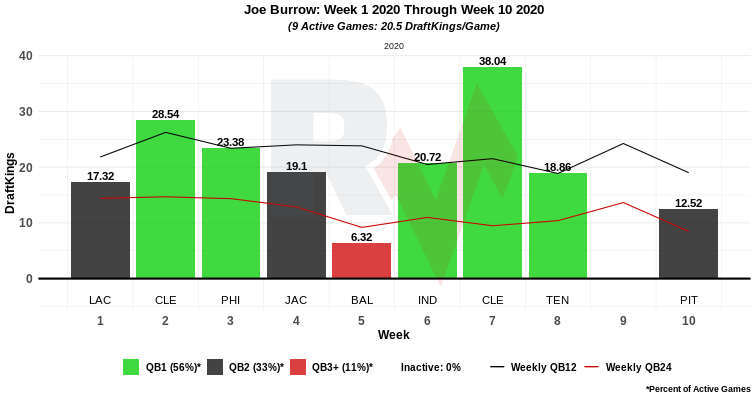 Burrow has a poor on-paper matchup with the Footballers, who are No. 5 with a -8.8% pass-defense DVOA.

But I think they are worse than that number suggests, given that they’ve had matchups against Carson Wentz (bleh), Baker Mayfield (had just 23 pass attempts in a blowout victory), Daniel Jones (twice) and Andy Dalton (injured).

Am I cherry picking? Maybe. But riddle me this: Who doesn’t love cherries?

Again, who doesn’t love cherries? If you don’t like cherries, you might need to have your taste buds examined.

Also, it’s amazing how quickly I can write these breakdowns after I’ve imbibed alcohol, yeah?

You can use our FantasyLabs Correlations Tool to research the overlapping production of quarterbacks and pass catchers. The sample is small, but in their brief time together Burrow and slot receiver Tyler Boyd have had a 0.86 correlation. If Burrow has a big game, Boyd probably will too. For tournaments, use our Lineup Builder to stack Burrow with his No. 1 receiver.

A high-end QB2 streamer in season-long leagues, Burrow is the top option in the Bales, CSURAM88, Koerner, Raybon, Hodge and Freedman Models for DraftKings, where he has a position-high 98% Bargain Rating.

Ben Roethlisberger, Pittsburgh Steelers (-10) at Jacksonville Jaguars (47.5 O/U): The Steelers have a slate-high 28.75-point implied Vegas total, and the Jaguars are No. 31 with a 30.2% pass-defense DVOA.

The Steelers have a real path to the No. 1 seed in the AFC, Roethlisberger has a legitimate shot at his first 4,000-yard, 40-touchdown season, he is pacing for fewer than 10 interceptions, his 2019 absence (combined with his 2020 production) enables MVP voters to see exactly how valuable he is to his team and he is still just +3000 to win the MVP at FanDuel. Just saying. 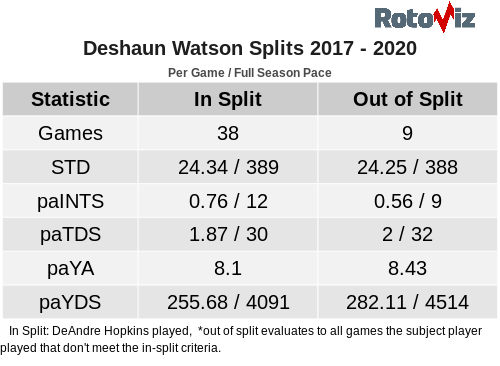 After a brutal season-opening stretch against the Chiefs, Ravens and Steelers, Watson has averaged 291.2 yards and 2.3 touchdowns passing over the past six games. Playmaking receiver Will Fuller has a tough matchup against cornerback J.C. Jackson.

Watson has position-high +3.73 and +4.41 Projected Plus/Minus values on DraftKings and FanDuel.

Matt Ryan, Atlanta Falcons (+5) at New Orleans Saints (51 O/U): At the Mercedes-Benz Superdome (a.k.a. the Coors Field of Fantasy Football), this game could explode with points. Ryan has dominated in his seven games this year with No. 1 wide receiver Julio Jones. 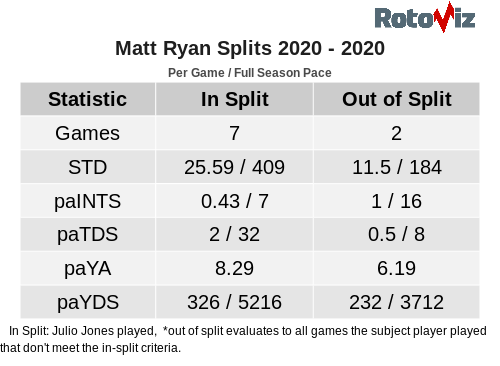 Since last year, Ryan leads all quarterbacks in 300-yard passing games with 14.

Matthew Stafford, Detroit Lions (+1.5) at Carolina Panthers (45.5 O/U): It’s unfortunate that No. 1 receiver Kenny Golladay (hip) is likely out, but Stafford’s splits with and without Golladay this year are almost nonexistent. 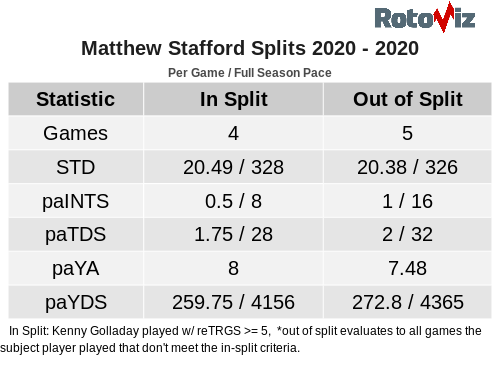 What they’ve allowed quarterbacks to do to them qualifies as “Not Safe For Work.”

As a reminder, Winston last year had an NFL-high 5,109 yards passing.

Philip Rivers, Indianapolis Colts (-2.5) vs. Green Bay Packers (51 O/U): The Packers could be without top perimeter cornerbacks Jaire Alexander (concussion/hand) and Kevin King (quadricep). Rivers has been perfectly adequate this year with three 300-yard passing games. If I had something else positive to say about Rivers, this would be the place where I’d say it.

Alex Smith, Washington Football Team (-1.5) vs. Cincinnati Bengals (Off the Board): The Bengals are No. 29 with a 23.0% pass-defense DVOA and could be without cornerbacks Darius Phillips (knee, IR), Mackensie Alexander (concussion) and LeShaun Sims (concussion). Smith has averaged 357.5 yards passing in his two games as the primary quarterback for the Footballers.

Andy Dalton, Dallas Cowboys (+7) at Minnesota Vikings (48 O/U): The Vikings could be without cornerbacks Mike Hughes (neck, IR), Holton Hill (foot, IR), Cameron Dantzler (concussion) and Mark Fields II (chest, IR). Dalton is healthy coming off the bye, the line has moved toward the Cowboys from +9.5 and there are reasons to bet on them this weekend.