Here’s where they place within our Week 9 fantasy football rankings (as of Tuesday evening).

Kyler Murray: Arizona Cardinals vs. Miami Dolphins (Off the Board)

As of writing (Tuesday afternoon), this game is off the board because the Cardinals are dealing with a COVID-19 situation coming off the Week 8 bye.

Kingsbury confirmed the two positive tests for the Cardinals. No additional positive tests since. “I don’t see this being a problem.” Practice will be “business as usual” today. Contact tracing showed limited interaction with others. But he acknowledged, “you never know.”

But this game is still scheduled to play and when it was posted we saw consensus lines of -4.5 and 47.5.

The No. 3 quarterback with 30.9 fantasy points per game, Murray has significantly progressed in his second NFL season. He’s not having a 2019 Lamar Jackson-esque campaign, but Murray’s production as both a passer and runner is notable.

For the season, Murray is No. 1 with 0.72 fantasy points per drop back (per Pro Football Focus).

Murray’s consistency has been unrivaled. In every game this year he has finished as a fantasy QB1 (per RotoViz NFL Stat Explorer). 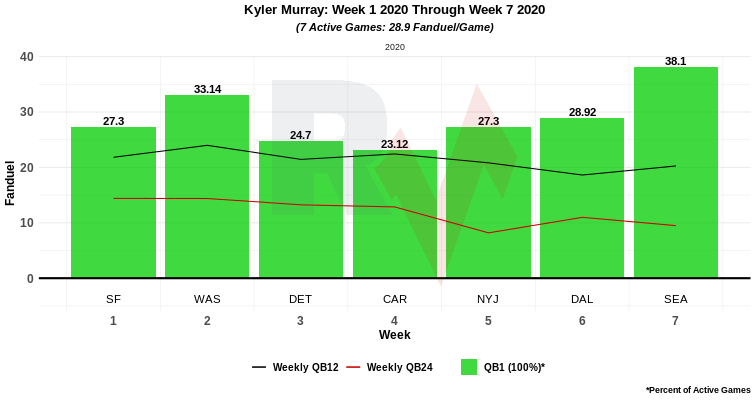 His consistency in large part rests with his Konami Code running ability: Even though he is No. 33 in the league with “just” 65 carries — which is an obscene total for a quarterback — Murray is No. 14 with 437 yards and No. 4 with seven touchdowns rushing.

Among all quarterbacks, Murray is easily No. 1 with 5.7 rushing fantasy points over expectation (per RotoViz NFL Player Statistical Summary).

As a passer, Murray has established an immediate connection with new No. 1 wide receiver DeAndre Hopkins. When targeting Nuk, Murray is 57-of-73 passing for 704-3-1 with a robust 9.9 adjusted yards per attempt (AY/A, per RotoViz AY/A App).

This defense has been significantly improved by the offseason additions of edge rushers Shaq Lawson and Emmanuel Ogbah, linebacker Kyle Van Noy and cornerback Byron Jones and the return from injury of cornerback Xavien Howard.

These Dolphins are not last year’s version.

But they can still be beaten. The three upper-echelon dual-threat quarterbacks to face the Dolphins this year have all done well.

Murray should be fine against Dolphins. It’s just an added bonus that he’s on the positive side of his splits (per our FantasyLabs Trends Tool).

The sample is small, but in his three games as a home favorite Murray has averaged 25.9 FanDuel points and exceeded expectations in every start.

Murray leads all quarterbacks in our Models with his floor projections: There might not be any safer player at the position this week.

A top-six QB1 in season-long leagues, Murray is the No. 1 quarterback in the Freedman Model for FanDuel, where he has a position-high +5.46 Projected Plus/Minus and 98% Bargain Rating.

Through the first month of the season, Allen was the No. 2 fantasy quarterback, scoring no fewer than three total touchdowns in each game.

But in the season’s second month, Allen had a sub-Daniel Jones 17.7 fantasy points per game

But I’m not dissuaded. Allen has always been better in fantasy than reality, and even when he has been average at best as an NFL player he has usually been a strong fantasy producer.

As a rookie, Allen was the No. 2 fantasy quarterback with 26.6 points per game for the final six weeks of the season after returning to action from an elbow injury.

In his second season, Allen had only one game in which he finished as anything less than a fantasy QB2 (excluding his partial Week 17). 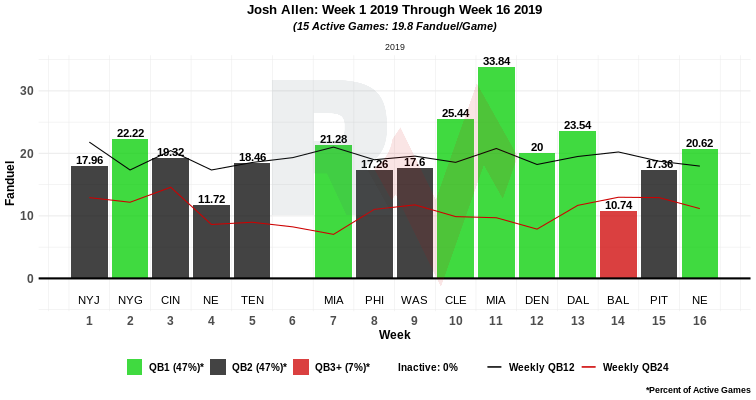 Even when he’s not good, Allen still tends to be good enough.

What makes Allen so investable is his Konami Code rushing ability and specifically his goal-line usage (per game, per Player Profiler).

With his rushing production, Allen has a nearly unrivaled floor/ceiling combination. No quarterback comes close to Allen with his 21 touchdowns rushing since 2018.

And this week Allen has a strong matchup against the Seahawks.

In every game this season, they have allowed either 300 yards or multiple touchdowns passing.

Long gone is the Legion of Boom.

On top of that, the Seahawks are dealing with major injury issues in their secondary.

Perimeter cornerback Shaquill Griffin (concussion/hamstring) left Week 7 early and missed Week 8. He didn’t practice at all last week, which does not bode well for his Week 9 availability.

In this game, the Seahawks could be without three secondary starters and one key injury fill-in.

Allen could not ask for a better bounceback matchup.

Full disclosure: I’m betting against the Bills. With quarterback Russell Wilson, the Seahawks are 73-55-7 against the spread (ATS), good for an 11.0% return on investment (ROI, per our Bet Labs database).

I know that the Seahawks are a West Coast team traveling east and playing in the early game, which theoretically means they should have some sort of biorhythmic disadvantage, but I’m not worried.

There might have been an edge with that angle years ago, but nowadays the market tends to account for cross-country travel.

In fact, bettors now might put too much weight on the west-to-east angle, creating value on the team that should be hindered. With the Seahawks, head coach Pete Carroll has had 24 East Coast games with a start time of 1 p.m. ET. He’s 14-7-3 ATS (27.5% ROI). You can bet on this game at DraftKings.

I expect the Seahawks to put up points, which should drive the Bills to stay aggressive on offense. In a game with the slate’s highest over/under, Allen could be forced to put up an excessive number of fantasy points in a back-and-forth contest.

A mid-range QB1 with No. 1 overall upside in season-long leagues, Allen is the top option in the Bales, CSURAM88, Koerner, Raybon, SportsGeek and Hodge Models for FanDuel, where he has a position-high three Pro Trends.

Allen is also the No. 1 quarterback in the Bales and Hodge Models for DraftKings.

This week is all about the matchup for Lock.

What they’ve allowed quarterbacks to do to them qualifies as “Not Safe For Work.”

Over the past three weeks — since the firing of HC Dan Quinn — the Falcons have been better on defense. But Cousins and Stafford both still passed for well over 300 yards, and the Falcons had the benefit last week of facing Bridgewater and the Panthers for the second time in less than a month.

It’s not as if the Falcons lost all their defensive troubles the minute they terminated Quinn.

But in his nine full NFL starts, Lock has been a fantasy QB1 twice, so he has the potential for a peak performance, and more often than not he has been no worse than a fantasy QB2. 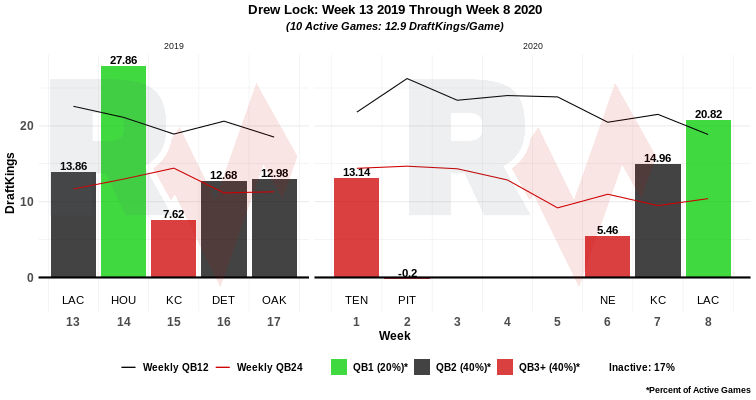 With wide receivers Jerry Jeudy and K.J. Hamler and tight ends Noah Fant and Albert Okwuegbunam, Lock probably still has enough playmakers around him to help him elevate his ceiling in an advantageous spot.

A streamable QB2 in season-long leagues, Lock is the No. 1 quarterback in the CSURAM88, Koerner, Raybon, SportsGeek and Freedman Models for DraftKings, where he has a position-high 95% Bargain Rating.

Today, we have the betting opportunity of a generation …

Mahomes leads all quarterbacks in our Models with his median and ceiling projections.

Russell Wilson, Seattle Seahawks (-3) at Buffalo Bills (54 O/U): Top perimeter wide receiver D.K. Metcalf has a tough matchup with All-Pro cornerback Tre’Davious White, but Wilson should still ball out. He has been a fantasy QB1 in every game this year. 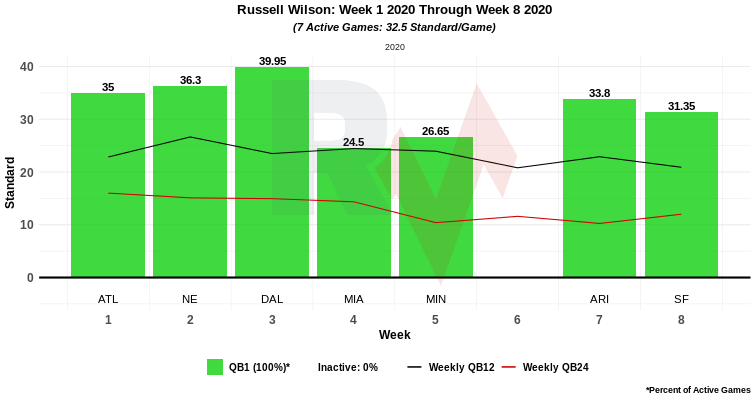 Wilson is easily No. 1 among all quarterbacks with 10.4 expected fantasy points over expectation per game. 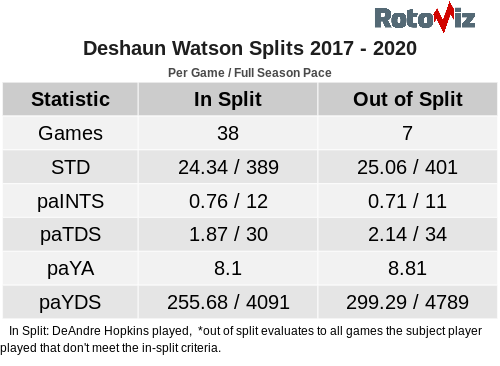 After a brutal season-opening stretch against the Chiefs, Ravens and Steelers, Watson has passed for 300-plus yards and multiple touchdowns in each of the past four games and is coming off the bye to face the Jaguars, who are No. 32 with a 37.17% pass-defense DVOA. 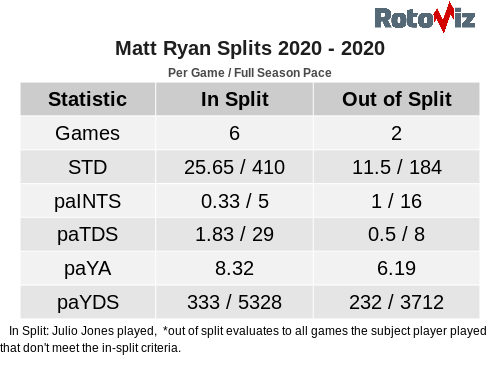 Since last year, Ryan leads all quarterbacks in 300-yard passing games with 14.