Usually, I write extensive breakdowns on each Model tight end, but I didn’t do that last week, and I’m not doing it this week for one simple reason: These guys don’t deserve it.

If you thought last week’s main-slate situation was bad for tight ends, avert your eyes. Last week was a garden compared to this week’s hellscape.

That I even mentioned some of those guys shows just how thin the tight end position is overall.

Of the guys at the top of our main-slate Models, two stand out the most in our Week 11 fantasy football rankings.

These are the tight ends I will write about extensively.

The other guys I will highlight as needed in the section on players with week-winning upside.

Whatever Winston Churchill thought about democracy, that’s what I think about Andrews: He’s the worst tight end in this slate, except for all the others.

In theory, there’s nothing wrong with Andrews. He’s No. 7 at the position with 11.0 PPR and 7.3 STD points per game. He trails only Travis Kelce and Jonnu Smith with his five touchdowns.

But if we’re being honest it’s clear that Andrews has underwhelmed in 2020. Season-long and DFS investors didn’t enter the season thinking of him as a mid-tier fantasy TE1, but that’s what he has been. And it feels like even that might be a stretch.

When he hasn’t scored a touchdown (Weeks 1 & 4-5) or hit season-high marks with seven receptions and 61 yards (Week 10), Andrews has been a human poop emoji (per RotoViz NFL Stat Explorer). 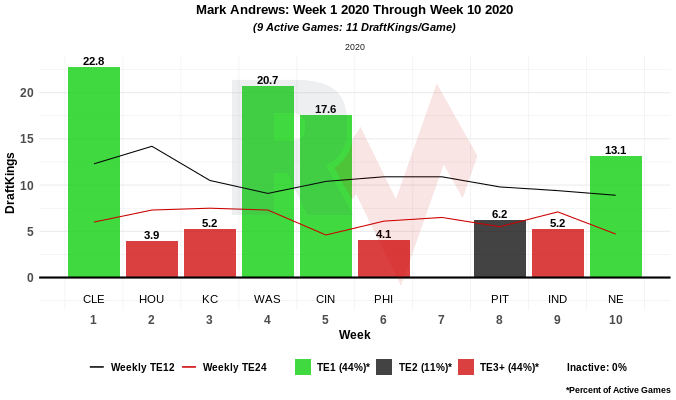 In the words of Gandalf: “I would not take the road through Moria unless I had no other choice.”

Andrews has two factors in his favor this week.

First, he is on the positive side of his career splits as a favorite (per our FantasyLabs Trends Tool).

Second, Andrews has a good matchup against the Titans, who are No. 29 with a 25.7% pass-defense DVOA against tight ends (per Football Outsiders).

In the interest of full transparency: I’m betting against the Ravens.

The Titans are a road dog off a loss, which I think the sports-betting public tends to undervalue. This year, road dogs off a loss are 27-20 against the spread (ATS), good for an 11.2% return on investment (ROI, per our Bet Labs database).

And as great as the Ravens are, opponents are actually 11-5 ATS (33% ROI) against them when quarterback Lamar Jackson is a home favorite. You can bet on this game at DraftKings.

If the Titans keep the game competitive or actually establish a lead, that will likely push the Ravens to throw the ball more, which could be a boon for Andrews.

As the tallest Lilliputian, Andrews leads all tight ends in our Models with his median, ceiling and floor projections.

Andrews is mid-tier TE1 in season-long leagues and the No. 1 option in the Bales Model for DraftKings, where he has a position-high eight Pro Trends.

The bull case for Henry is just as much about the matchup as it is about anything to do with him. The Jets are No. 32 with a 34.0 PFF coverage grade.

Three targets: That’s not a lot. But the guys with three-plus targets against the Jets have put up fantasy points (with the exception of Dawson Knox, LOL).

Against the Jets, Henry could have a near-Kelce performance.

Just 37-387-2 receiving, Henry has had a meh-tacular campaign. Even when he has been a fantasy TE1, Henry hasn’t been all that good. 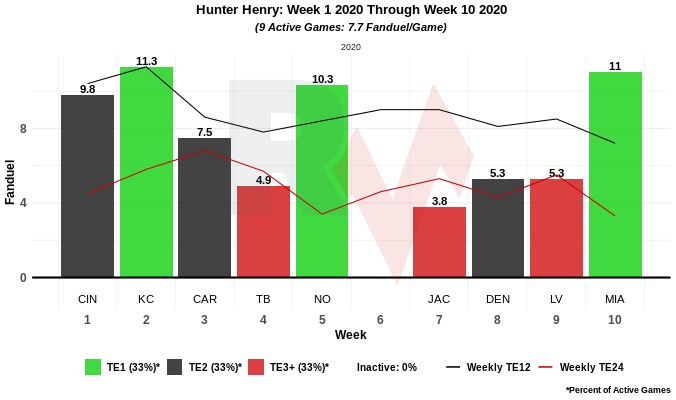 But his underlying numbers are fine: He’s No. 6 at the position with 68.3 AirYAC and No. 10 with 10.2 expected fantasy points per game.

With his usage and matchup, Henry is a decidedly non-horrible option, which makes him incredibly attractive.

Henry is a mid-range TE in season-long leagues and the consensus No. 1 option in our Models for FanDuel, where he has a position-high +2.51 Projected Plus/Minus.

Jonnu Smith, Tennessee Titans (+5) at Baltimore Ravens (49.5 O/U): Over his past five games, Smith is an anemic 8-97-1 receiving on 16 targets, but for the season Smith is tied with Travis Kelce with a position-high six touchdowns receiving. Without strong safety Earl Thomas (released this offseason), the Ravens are significantly weaker against tight ends than they were last year, now ranking No. 21 against the position with a 6.8% pass-defense DVOA.

Noah Fant, Denver Broncos (+3.5) vs. Miami Dolphins (45 O/U): Despite returning from injury in Week 7, Fant (ankle, ribs) is dealing with various ailments and is clearly playing at less than 100% capacity. Even so, Fant has averaged 6.5 targets per game over the past month and is the No. 4 tight end on the season with 72.9 AirYAC per game.

Hayden Hurst, Atlanta Falcons (+4) at New Orleans Saints (52 O/U): The story of a guy’s season can’t be reduced to one tweet, but Hurst is keeping pace with his former Ravens teammate in his first year with the Falcons.

Most people don’t think of Hurst as one of the best tight ends in the game, but he has amazingly been a fantasy TE1 in 67% of his games so far. 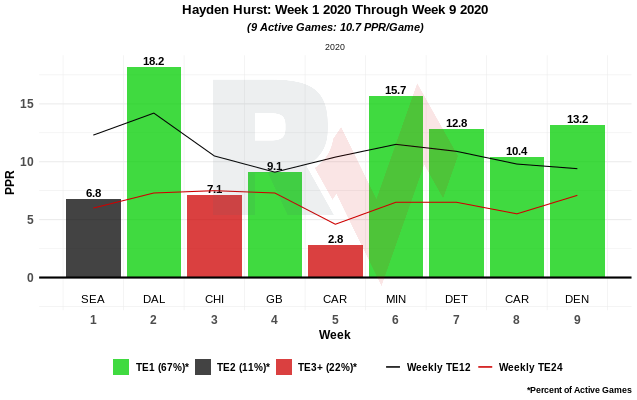 You can use our FantasyLabs Correlations Tool to research the overlapping production of pass catchers and quarterbacks. The sample is small, but in their brief time together Hurst and quarterback Matt Ryan have had a 0.75 correlation. If Hurst has a big game, Ryan probably will too. For tournaments, use our Lineup Builder to stack Hurst with his quarterback.

Through nine games, Hurst’s 2018 Austin Hooper impersonation has been on point.

T.J. Hockenson, Detroit Lions (-2.5) at Carolina Panthers (45.5 O/U): No. 1 wide receiver Kenny Golladay (hip) is tentatively expected to play, but he missed practice on Thursday after getting in a limited session on Wednesday, so his Week 11 status is highly uncertain. If Golladay is out, Hockenson could see more than his usual allotment of targets, and he is No. 6 on the year with 11.3 expected fantasy points per game. The Panthers are No. 31 with a 36.7 PFF coverage grade.

Jared Cook, New Orleans Saints (-4) vs. Atlanta Falcons (52 O/U): At the Mercedes-Benz Superdome (a.k.a. the Coors Field of Fantasy Football), this game could explode with points. I’m pessimistic about Cook, who has a paltry 12% target share, but the Falcons have allowed a league-high 12.0 fantasy points per game to opposing tight end units with 55-597-8 receiving.

Eric Ebron, Pittsburgh Steelers (-10.5) at Jacksonville Jaguars (46 O/U): The Steelers have a slate-high 28.25-point implied Vegas total, and tight ends rank No. 3 against the Jags with 10.5 fantasy points per game on 37-521-7 receiving. Overlooking his Week 1 letdown, Ebron has a workable average of 5.9 targets over his past eight contests with fewer than five targets in just one game.

Austin Hooper, Cleveland Browns (-3) vs. Philadelphia Eagles (47.5 O/U): If we remove last week’s wind-impacted run-game festival, Hooper has a 20% market share on the year. Without No. 1 wide receiver Odell Beckham Jr. (knee, IR), Hooper might be the No. 2 receiving option in this offense. The Eagles are No. 28 with a 25.4% pass-defense DVOA against tight ends.

Dallas Goedert, Philadelphia Eagles (+3) at Cleveland Browns (47.5 O/U): No. 1 tight end Zach Ertz (ankle, IR) has been designated to return, but he seems unlikely to be activated in time for this weekend. In his three fully healthy games (Weeks 1-2 & 10), Goedert is a team-best 16-164-1 receiving on 23 targets. It’s time for him to kill the boy and let the man be born.

Logan Thomas, Washington Football Team vs. Cincinnati Bengals (Off the Board): Lines for this game have been pulled because the Footballers are dealing with a COVID-19 situation, but when this game was bettable the Footballers were -1.5 favorites. With a minimum of four targets in every game and an average of 5.7 targets for the season, Thomas has an elevated floor, and tight ends are No. 2 against the Bengals with 10.9 fantasy points per game on 48-583-6 receiving. In the post-Dwayne Haskins era, Thomas has averaged 8.7 yards per target.