This game has the largest Vegas total of the slate at 219.5 points, and the Lakers, who have lost 13 of their last 14 games and have already shut down some of their veteran players, are somehow only nine-point dogs to the ‘road’ Clippers, who currently sit fifth in the Western Conference playoff picture. (Note: Both teams call the Staples Center home; the home/road designation is essentially meaningless.)

The Lakers’ rotation is fairly straightforward currently: They apparently just discovered that Jordan Clarkson and D’Angelo Russell are allowed to play together, and they started last game at the two backcourt spots. The Lakers played very well against the defending champion Cavaliers, and Russell had a career game, going for 58.5 DraftKings points thanks to 40 real points in 41.3 minutes. Clarkson also received 41.1 minutes, and shooting guard Nick Young missed the game due to an illness. It’s possible that he’ll slide in and start beside Clarkson or Russell, or the Lakers could elect to play Clarkson and Russell together again. Either way, the backcourt rotation is currently a short one (via our Matchups tool).

Brandon Ingram also played a ton of minutes on Sunday (40.0), and he’s been consistently involved over the past couple of months. He’s averaging a putrid 0.60 FanDuel points per minute, but he’s also just $4,500. He needs just 17.62 fantasy points to hit value, and he’s been able to do that of late:

He’s averaged a +6.84 FanDuel Plus/Minus on 90 percent Consistency over his last 10 games, although note that he does have a tough matchup against great wing defender Luc Mbah a Moute tonight.

Julius Randle and Larry Nance Jr. have been volatile of late and might be better suited to guaranteed prize pools (GPPs) than cash games, but Ivica Zubac profiles as the opposite. He hasn’t exhibited a high ceiling lately, but outside of a brutal game against Houston he’s been very solid ever since the Lakers shut down Timofey Mozgov and gave him the starting role. He’s a tough guy to analyze: This matchup against the Clippers frontcourt is a hard, and his minutes have been up and down, but he has a ceiling that makes him worthy of GPP exposure:

Some of the main Clippers — Chris Paul and DeAndre Jordan, specifically — have been disappointing in road back-to-backs this season: 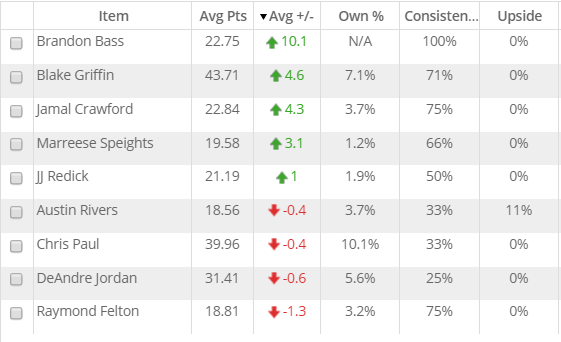 But, again, this isn’t a true road B2B: Note that it’s a B2B, but you can essentially ignore the “A” part of it in our Player Models.

Those two guys plus Blake Griffin continue to have high Volatility Ratings and GPP Grades in our DFS Ownership Dashboard:

The reason? Their continued low salaries on DraftKings: All three players today have Bargain Ratings of at least 90 percent.

Blake was the guy struggling the most, but he responded with a solid game last night, scoring 45.5 DraftKings points in 30.9 minutes of action thanks to improved 12-of-19 shooting from the field. All three hit value against the poor Knicks, and they’ll have a similar matchup tonight: The Lakers rank sixth in pace, averaging 101.0 possessions per game, and dead last in defensive efficiency, allowing 110.9 points per 100 possessions. They dominated them earlier in the season . . . 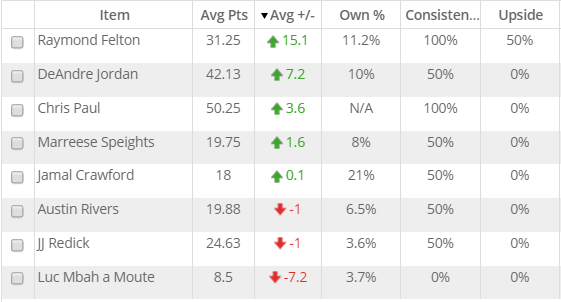 . . . although Blake was out for both games. That said, he has solid correlation with especially CP3, and it’s hard to imagine him struggling against the likes of Randle and Zubac down low.

Spencer Dinwiddie is currently projected to start for the Brooklyn Nets, as Jeremy Lin is listed as doubtful tonight with a sprained right ankle. Here’s what our NBA News feed had to say about the situation: 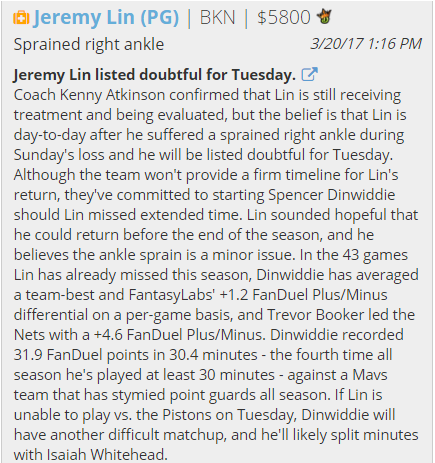 The Nets could be very thin, as Sean Kilpatrick (hamstring) has been ruled out and Joe Harris (shoulder) continues to miss time. Dinwiddie hasn’t been efficient this season — he’s averaging just 0.75 FanDuel points per minute — but he should approach 30 minutes and he’s been mostly the same (0.71 points per minute) this season without Lin, Harris, or Kilpatrick on the floor (per the NBA On/Off tool): 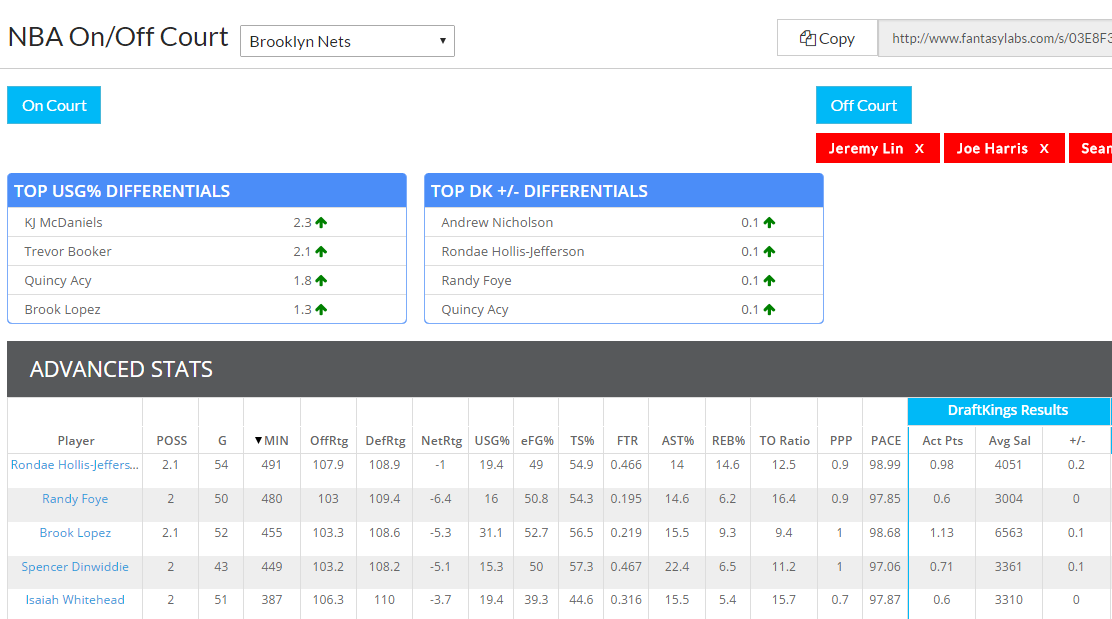 Ricky Rubio finally got his priced bumped up over the last week or so, but he’s still been an incredible value of late: He’s averaged a ridiculous +9.48 Plus/Minus on 100 percent Consistency over his last 10 games.

His matchup against the Spurs is definitely brutal: The Spurs rank 27th in pace, averaging just 96.8 possessions/48, and first in the league in defensive efficiency, allowing only 101.0 points/100. That said, Rubio is at home, where he’s had positive splits this season . . .

. . . and he’s actually dominated the Spurs in three meetings already:

He will likely get an ownership discount because of the matchup, which makes him intriguing in GPPs.

The Phoenix Suns have been the fifth-worst team against opposing PGs this season:

Goran Dragic gets them today, and even though his production has been up and down lately . . .

. . . he is seeing solid minutes and played well against the Suns earlier this year, and that was when they were a superior defensive team with Eric Bledsoe and Tyson Chandler in the lineup.

Further, Dragic is on the right side of his home/away splits tonight:

Kentavious Caldwell-Pope has not been very good lately, averaging a -0.55 FanDuel Plus/Minus on 30 percent Consistency over his last 10 games.

As you can see, he did put up a nice game on Sunday, scoring 37.6 FanDuel points in 33.3 minutes of action. I don’t want to put too much stock into a single-game sample, but that game does stand out for one important reason: He was playing the Suns, who rank third in pace, averaging 102.5 possessions/48. KCP has shown this season that he does much better in ‘pace-up’ games — games in which the opposing team plays at a faster pace than the player’s team.

He has averaged 25.45 FanDuel points on 62.2 percent Consistency in these games, which is an improvement on both baseline rates. He’s in another pace-up spot today: The Nets are the fastest team in the league this year, averaging 103.5 possessions/48.

There salary scale at SG is steep today: 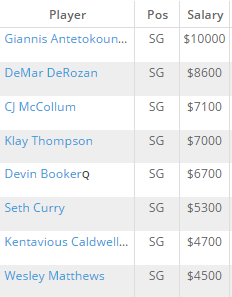 Klay Thompson and C.J. McCollum will likely be popular at their ranges, and they’ve both been solid lately, averaging +3.36 and +4.08 FanDuel Plus/Minus values over their last 10. Giannis Antetokounmpo, on the other hand, has been awful lately:

And yet he still owns the position’s highest projected ceiling on the day. Here’s a case for him: He’s playing the Trail Blazers, who rank 24th in defensive efficiency on the year, allowing 108.7 points/100. It seems like they’ve been better since Jusuf Nurkic came to town — and they have been while he’s been on the floor — but overall since the All-Star break they still rank 20th in defensive efficiency, allowing 108.2 points/100. Giannis has played a tough schedule lately, and he’s shown that he can dominate against the league’s worst defenses:

And just against the Blazers? The same story:

The Raptors have been excellent defensively since acquiring Serge Ibaka: They rank third overall in defensive efficiency since the All-Star break, allowing just 101.0 points/100. That’s not good news for Jimmy Butler, although it’s difficult to deny how amazing he’s been this season with Dwyane Wade off the floor. Per the NBA On/Off tool, Butler has averaged 48.9 DraftKings points and a +7.8 Plus/Minus in 10 games sans his wing mate.

Butler has increased his usage rate by 3.5 percentage points up to 30.3 percent without Wade, and he’s averaged 38.3 minutes in those contests. Even against a tough Raptors defense, he has a very safe floor given his role. He’s a better value on FanDuel today, where his $8,900 price tag comes with 11 Pro Trends and a 75 percent Bargain Rating.

Like KCP, Harrison Barnes has also done well in pace-up games this year, averaging 30.46 FanDuel points and a +5.05 Plus/Minus on 75.0 percent Consistency in games against opponents who play at least five possessions faster than the Mavericks:

That said, a lot of the fast-paced teams this season — think of the Nets and Suns — aren’t good defensive squads. Golden State is one of the exceptions, as they rank second in pace, averaging 102.6 possessions/48, and also second in defensive efficiency, allowing 101.2 points/100. (That’s very hard to do.) However, even in pace-up games against top-10 defenses, Barnes has been incredibly consistent:

And against specifically his old team, he’s been solid (#RevengeGame):

As you might expect, every position is valuable against the Nets, who again rank first in pace and 28th in defensive efficiency.

Marcus Morris hasn’t been great lately: He has averaged a poor -2.88 FanDuel Plus/Minus on 30 percent Consistency over his last 10 games.

That said, he crushed value already once this year against these very Nets . . .

. . . and playing time hasn’t been an issue: He got 36.2 minutes last game and has been below 29 minutes just once in his last nine games. Against bottom-five defenses this season, Morris has averaged 26.22 FanDuel points. At his low $5,300 price tag today, he needs just 21.13 points to hit value.

James Johnson had a huge game on Sunday, putting up 47.9 FanDuel points in 30.8 minutes against the Trail Blazers. He continues to be a solid DFS asset, averaging a +4.42 Plus/Minus on 60 percent Consistency over his past 10 games:

And he’s elite against soft competition:

Today he faces the Suns, who don’t have the world’s best power forward defender: 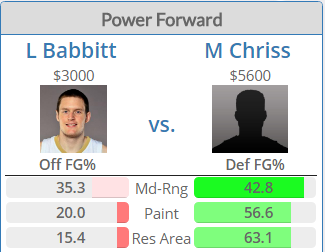 If you want to pay up and pivot from Blake, Draymond Green will likely catch your eye. However, he hasn’t really been consistent lately . . .

. . . but he has an intriguing matchup against the Mavericks, who rank 29th in pace — which is horrible — but also dead last in rebound rate, grabbing only 46.5 percent of the available boards. That said, Draymond has had middling success against bottom-five rebounding teams this year . . .

. . . although that sample is brought down by a poor game against the Nets:

Hmm. The Warriors were 21-point favorites in that game, so perhaps Dray does better in close spreads (today the Warriors are -5.0)?

Well that’s not ideal either. There’s no denying Dray’s immense ceiling with blocks and steals, but beware of the negative trends today.

You would think that Detroit would be a terrible matchup for Brook Lopez: Detroit ranks seventh in rebound rate this year, grabbing 51.4 percent of the available boards, and ninth in defense, allowing 105.0 points/100. Lopez isn’t the best rebounding center in the league. That said, Lopez has enjoyed a lot of success against ‘traditional’ centers this year — especially those who have trouble following him to the perimeter, as he’s stepped up his 3-point game this season. Take a look at how he did against Detroit in their first meeting this year:

I mean, 50.7 FanDuel points ain’t too shabby. And against similar teams — those with slow paces (my proxy for having ‘traditional centers’) but without top-three defenses — BroLo has been successful:

Miami has struggled all season against centers, allowing a fifth-worst +4.32 DraftKings Plus/Minus to the position:

They get Alan Williams (a.k.a. “Big Sauce”) today, who has been incredible lately, averaging a +8.52 FanDuel Plus/Minus on 90 percent Consistency over his last 10 games.

He did not play in the first game against the Suns, but their other centers — at the time Alex Len and Tyson Chandler — dominated:

Williams remains a better value on FanDuel, where his low $5,700 price tag comes with eight Pro Trends and an 86 percent Bargain Rating. He’s projected for a low five to eight percent ownership and should be a nice GPP pivot, as he’s $1,400 more than the likely chalky Zubac tonight.

And if you want to pay up and be contrarian, Karl-Anthony Towns should definitely be low-owned given the value plays at the position and that he’s playing the Spurs, who rank 27th in pace and first in defensive efficiency. That said, he is at home today, where he’s on the right side of his extreme splits . . .

. . . and he’s had moderate success against the Spurs this season:

Those 45.33 DraftKings points are about 0.8 points less than what he needs to hit value at his $9,700 price tag tonight, but he has been above that mark in each of his last two games, and he has positive correlation with Rubio, who (as shown above) has played very well against the Spurs.