DeAndre Jordan has come a long way since entering the league in 2008. Mostly known for protecting the rim and ending Brandon Knight‘s life . . .

. . . Jordan got a chance to start in 2013 and hasn’t looked back. He’s averaged at least 10 points and 13 rebounds per game during each of the past four seasons. His range may never extend past three feet from the rim, but Chris Paul‘s alien-like ability to find Jordan for alley-oops has more than made up for Jordan’s limitations as a sorcerer/scorer. Despite posting similar scoring and rebounding averages, Jordan has played just 31.5 minutes per game this season, resulting in an average of 35.19 DraftKings points per game (PPG) — his lowest mark in three seasons.

Jordan’s fantasy value is almost entirely dependent on his scoring and rebounding, although he’s also averaged over two blocks per game during four of his last six seasons. His average of 1.7 blocks per game this season is his lowest mark since 2012, but he’s still been one of the best rim-protecting centers in the league. Per NBAmath.com, Jordan has saved 115.43 points on defense this season — the fifth-highest mark in the league. His role in the offense has remained steady, as he’s averaged between six and seven shots per game for five consecutive seasons.

Jordan has proven to be a bit better at the Staples Center over the past three seasons than on the road:

Per our Trends tool, we see that he’s averaged 1.12 more DK PPG at home than on the road over the past three seasons. (Jordan has also had higher ownership at home.) Still, his performance on the road is far from poor, and he’s posted almost even home/away splits this season:

Jordan has still played better at home, but it’s clear he’s capable of balling out on the road. When he plays away from the Staples Center he deserves enhanced consideration in guaranteed prize pools because of his ownership discount.

Jordan has roughly been the same player regardless of whether he’s been a Vegas favorite or an underdog over the past three seasons:

When a favorite, Jordan has averaged just about the same number of DK PPG as he has when an underdog over the past three seasons. Still, he has posted a better Plus/Minus as a favorite, and his Consistency Rating has been higher, especially this season:

The Clippers have been underdogs during 65 of Jordan’s 244 games over the past three seasons. The sample isn’t huge, but it’s probably large enough to suggest that he’s not an ideal play (especially in cash games) in this situation.

Jordan and the Clippers are regularly favored against most teams outside of Golden State and San Antonio. They’ve also been heavy favorites more than a handful of times and Jordan has exhibited the ability to provide his usual output in potential blowouts:

In 54 games as a double-digit favorite over the past three seasons, he has posted a +3.33 Plus/Minus and averaged 37.63 DK PPG. This trend has become even more pronounced this season:

Jordan has exceeded his salary-implied total in 12 of 13 games as a double-digit favorite this season. His ownership has been high in these games, but he’s crushed enough to make him a viable DFS option even with the heightened ownership.

Jordan’s success as a both a mild and heavy favorite suggests that he should perform well against the league’s worst teams. That assumption is correct:

Jordan hasn’t been terrible against the league’s elite teams, but his 48.2 percent Consistency is significantly less than optimal. Look to feature Jordan during games against poor opponents. Surprisingly, his ownership has been bearable in these situations.

Jordan’s absence on the court has directly led to increased productivity from teammates Blake Griffin and CP3 (per our On/Off tool):

Paul Pierce has also benefited from Jordan’s absence, although Pierce has averaged fewer than 12 minutes per game this season.

Jordan’s presence on the court has led to increased value for a few of the Clippers’ backup guards:

Raymond Felton and Austin Rivers to an extent have thrived with Jordan on the court this season. Felton has averaged just 22.1 minutes per game this season and likely won’t be much of a DFS option on nights when CP3, Rivers, J.J. Redick, and Jamal Crawford are healthy, but Felton is a stacking option with Jordan whenever one of the other guards is forced to miss some action.

We’ve previously discussed how CP3 and Griffin have thrived when one of the Big Three has left the court, but Jordan hasn’t seen the same uptick in his value this season:

Jordan has been used at a slightly higher rate when CP3 has been off the court this season, but it hasn’t led to much of a difference in his DK Plus/Minus differential. As Paul is important to Jordan’s offensive production, it makes sense that the absence of the point gawd hasn’t helped Jordan’s fantasy contributions.

The absence of Griffen, however, has opened up the floor for Jordan:

It’s not a secret that the Clippers have spacing issues when Jordan and Griffin share the court, and both players have thrived as the team’s solo big man. Jordan has a team-high +2.7 DK Plus/Minus differential without Griffin on the court this season. Look to feature Jordan when he can operate as the team’s go-to rim roller.

Below is the average production for the Clippers during Jordan’s 10 best fantasy performances of the past two seasons, first on FD and then on DK. 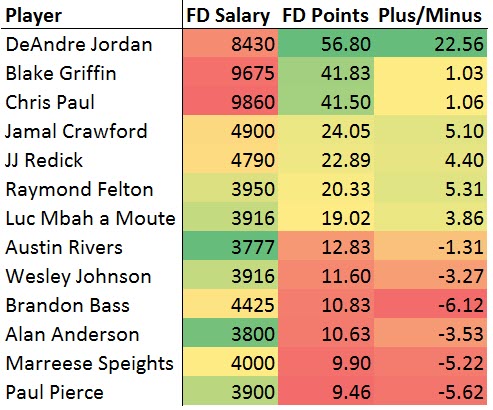 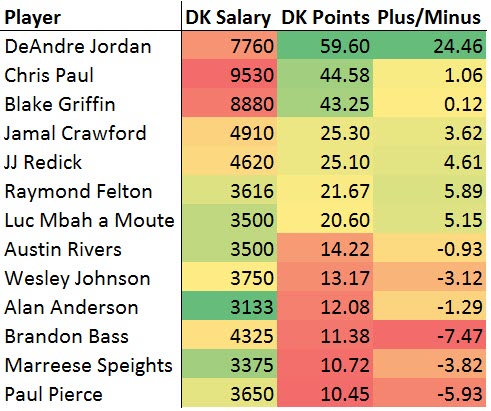 The picture is pretty clear: Look to stack him with a guard. Griffin has also been viable with Jordan, although their similar styles of play make this more of a contrarian stack than a go-to stack.

Jordan has made a living both protecting and destroying rims around the country. His ability to grab 15-plus rebounds on any given night gives him a high DFS ceiling, and Jordan has specifically thrived when favored (especially by 10-plus points), against poor opponents, and in games Griffin has missed.

Jordan has been underpriced on both DK and FD in recent weeks. Look to feature him with CP3 while he remains cheap.