Chris Paul has played an entire 82-game season just once during his 12 year career. He missed over a month this season with a torn ligament in his thumb, although he recently returned and has played 32-plus minutes during each of his last three games. Despite missing 21 games this season, Paul has continued to work as one of the most consistent point guards in the league. His average of 44.04 DraftKings points per game (PPG) this season is a three-year low, although the mark is still within one fantasy point of his three-year high, as Paul continues to ball out on a nightly basis.

Paul has averaged just 12.5 field goal attempts per game this season — his fewest since 2012. This has led to an average of just 17.4 points per game, although his assist numbers have remained elite, as he’s averaged over nine dimes per game since his second season. Paul is currently averaging a career-high 5.3 rebounds per game, but this could be due more to the small sample of games played than a change in his game. His DK PPG may be at a three-year low, but his season-long +2.6 Plus/Minus is marks a three-year high.

Paul has fairly agnostic home/away splits over the past three seasons (per our Trends tool):

He’s been slightly better away from the Staples Center, but it’s clear that he’s balled out wherever he’s played. On a raw basis, he’s basically the same wherever he plays.

Paul has played only 39 games this season, but this year he’s played better at home. Still, the difference isn’t huge:

Paul’s 41 percent Consistency during road games is concerning, but his average DK PPG is within two points of his home mark. He’s proven over the last three seasons that he’s more than capable of producing his usual stat line on the road, yet he’s had significantly higher ownership at home. Paul is worthy of DFS consideration wherever he plays, but he’ll likely continue to be less chalky on the road thanks to his underwhleming performance away from the Staples Center during his latest injury-shortened season.

The Clippers haven’t managed to string together a serious playoff run aside from their collapse against the Rockets during the 2014-15 playoffs, but they’ve still routinely been among the league’s best regular season teams. They haven’t finished with fewer than 53 wins since CP3 came to town (excluding the strike-shortened 2011-12 season), and Paul has been a Vegas underdog in only 44 of his 211 games over the past three seasons. He’s risen to the occasion during those rare instances:

As an underdog over the past three seasons, Paul has done well. He’s performed fine as a favorite, although it’s clear there’s value in targeting Paul as an underdog, as he’s had reduced ownership to go along with his elevated averages.

The Clippers’ high level of play has resulted in their being favored by 10-plus points 54 times over the past three seasons with Paul on the court:

Paul hasn’t smashed value as a double-digit favorite, but even with the risk of a blowout he’s been within a half of a fantasy point of his salary-implied total overall. At the same time, he’s been owned in 21.5 percent of lineups in games in which the Clippers are favored by double digits.

Paul’s style of play hasn’t led to a ton of trends in which he smashes value, but he’s also proven to be more than capable of putting up numbers in theoretically poor situations:

Paul has surpassed his implied point total 62 percent of the time in games against opponents with a win percentage of 60 percent or more. This is unsurprising, given that he also does well as an underdog.

Still, Paul has also played just fine against opponents with a win percentage of 40 percent or less:

CP3 has carved up the defenses of elite and bad teams alike. We’ve found a few spots in which Paul can provide a bit more value than what’s expected, but it’s clear that almost nothing can stop the Point Gawd from going about his business on the basketball court . . .

Paul has surpassed his implied point total less than 45 percent of the time during the back end of a back-to-back. We’ve seen players have more success during a 2H back-to-back compared to a 2A, but this hasn’t been the case with Paul. Now 31 years old and often banged up, fading Paul on the back end of a back-to-back is certainly in play, especially given his ownership in those situations. Still, his 2H trend is his worst trend to this point, and he’s still averaged over 40 DK PPG in those instances.

Paul’s salary on FanDuel has been less volatile this season, as he’s reached a low of $8,600 and a high of $9,700. His average of 40.85 FD PPG implies a salary of $9,800. Since returning from injury, Paul has been a bit underpriced across the industry.

Per our On/Off tool, Paul’s presence on the court hasn’t led to much value for any meaningful teammates:

While Brandon Bass and Marreese Speights have crushed with Paul on the court this season, they’ve both averaged fewer than 18 minutes per game and aren’t among the team’s top rotation players.

We see some more familiar names when we look at how the Clippers have performed with Paul off the court this season:

Jamal Crawford‘s iso-heavy style has resulted in more usage and value with Paul off the court this season. Blake Griffin has also provided additional value with Paul out, although neither player has necessarily crushed without the team’s offensive general on the court.

We see similar mild swings in value when Griffin has been off the court this season:

Austin Rivers, DeAndre Jordan and Paul have all played well without Griffin on the court, but once again the value hasn’t been absurd. Rather, we see that Griffin and Paul have really smashed value when Jordan has been off the court:

Jordan and Griffin are both good players, but neither is capable of consistently stretching the floor, and this has resulted in cramped spacing for the offense. The failure to develop a consistent wing to fill out the starting lineup hasn’t helped matters, but it’s clear that Paul and Griffin have had some success when Jordan’s absence has opened up the middle of the floor. A Paul-Griffen stack could be viable when Jordan is out of the lineup.

Below is the average production for the Clippers during Paul’s 10 best fantasy performances of the past two seasons, first on FD and then on DK. 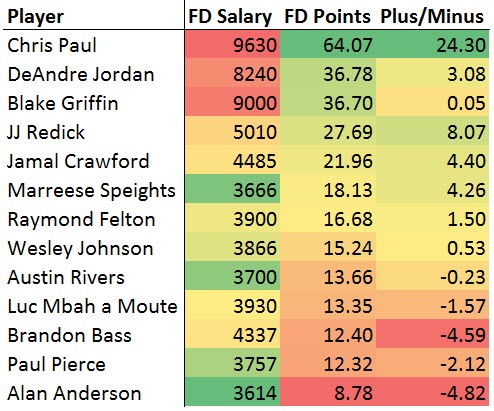 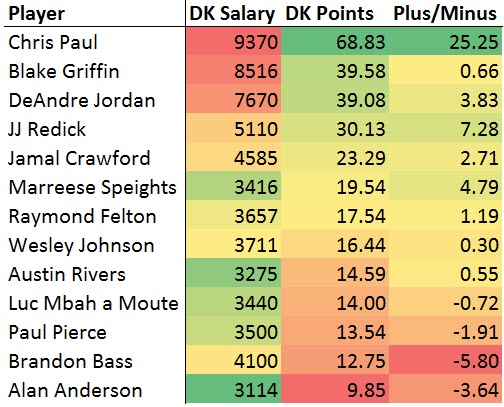 None of CP3’s meaningful teammates have proved to be poor stacking options during Paul’s biggest fantasy performances of the past three seasons. J.J. Redick and Jordan have had the most success, but Paul-Griffin and Paul-Crawford stacks are also in consideration (with either Rivers or Redick out). Paul has attempted over 25 shots in a game just twice over the past three seasons. He looks to get his teammates involved regardless of how well his shot may be falling on a given night. For this reason it’s safe to play him alone or stack him with any of his key teammates in guaranteed prize pools.

Cp3 is still among the league’s best point guards. He’s continued to struggle with injuries, but when he suits up he’s still averaged about 44-plus DK PPG. Paul has agnostic home/away splits and does very well as an underdog. Against elite and poor teams alike over the past three seasons, Paul has basically been himself. He’s struggled on the back end of back-to-backs, although his struggles are relatively minor. He’s truly a DFS option on any given night. Look to feature Paul while he still has a post-injury discount.