“What NHL Metrics Should I Prioritize in My Models and Player Selection?”

That’s the question we will continue to attack with this series. This time of year, most of you are probably crushing one of Jonathan Bales’ books before MLB starts. That alone is probably a positive expected value move. Think of the Metric Lab as a far less entertaining and carefully researched version for NHL.

If you’ve watched any of our NHL Inside the Lab shows, you know it makes sense to target peripheral stats. But can you be successful chasing less frequent events, such as goals and assists?

Let’s find out if everything I believe in is wrong. It wouldn’t be the first time.

The benefit of targeting peripheral stats has been well documented in this series: Small events such as shots are exactly what lead to less predictable — but often more significant — events, such as goals and assists.

Luckily, using our Trends tool, we can compare the Plus/Minus values to both Consistency and Ownership. For those still pretending that they understand those stats, be better:

Here are the baseline trends for all three metrics, starting with power play skaters in the 50th percentile or better over the past month for each.

If you’ve been following along, you would recognize that both of these are pretty standard baselines for skaters on the power play, but it’s nice to have something to build upon.

Now, the following charts highlight power play skaters using different percentile buckets for goals and assists over the past month. More importantly, we can see the impact of goals and assists on Plus/Minus in comparison to Consistency and Ownership.

From a macro perspective, goals and assists have little impact on a skater’s salary-based expectation in comparison to a metric like shots. This could mean a couple of things.

Ownership is largely unaffected by the different goals and assists buckets, but that’s not the case with Consistency.

Although not nearly as historically strong as peripheral stats, goals when scored at an elite rate have provided players with a reasonable Consistency Rating. With assists, on the other hand, we see Consistency plummet at the extremes.

Let’s dive deeper into how goals and assists affect the value of different positions.

Each position has unique intricacies as to which stats strongly affect value, but the true edge comes in identifying which of these metrics are not typically priced into their salaries. This chart looks at the same percentile buckets listed above, but breaks things down by position and has removed samples (counts) with fewer than 25 subjects. 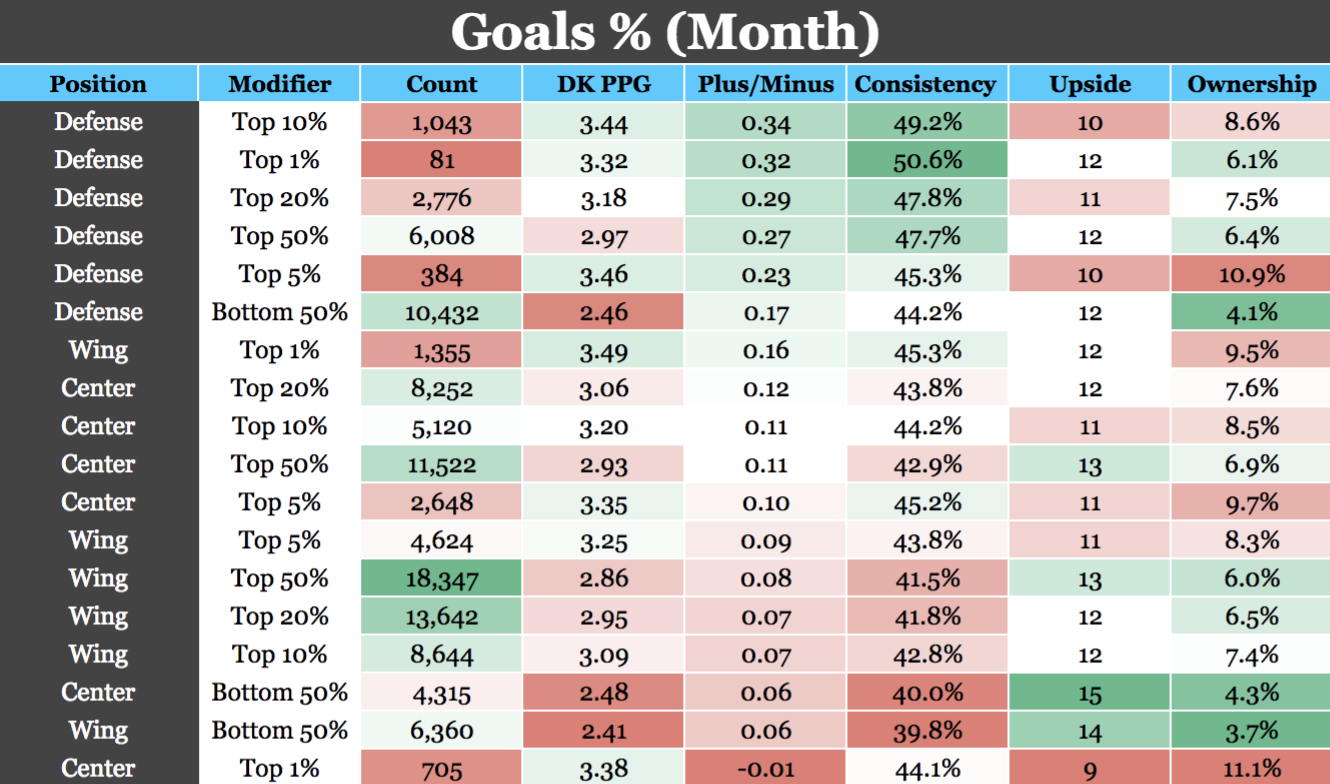 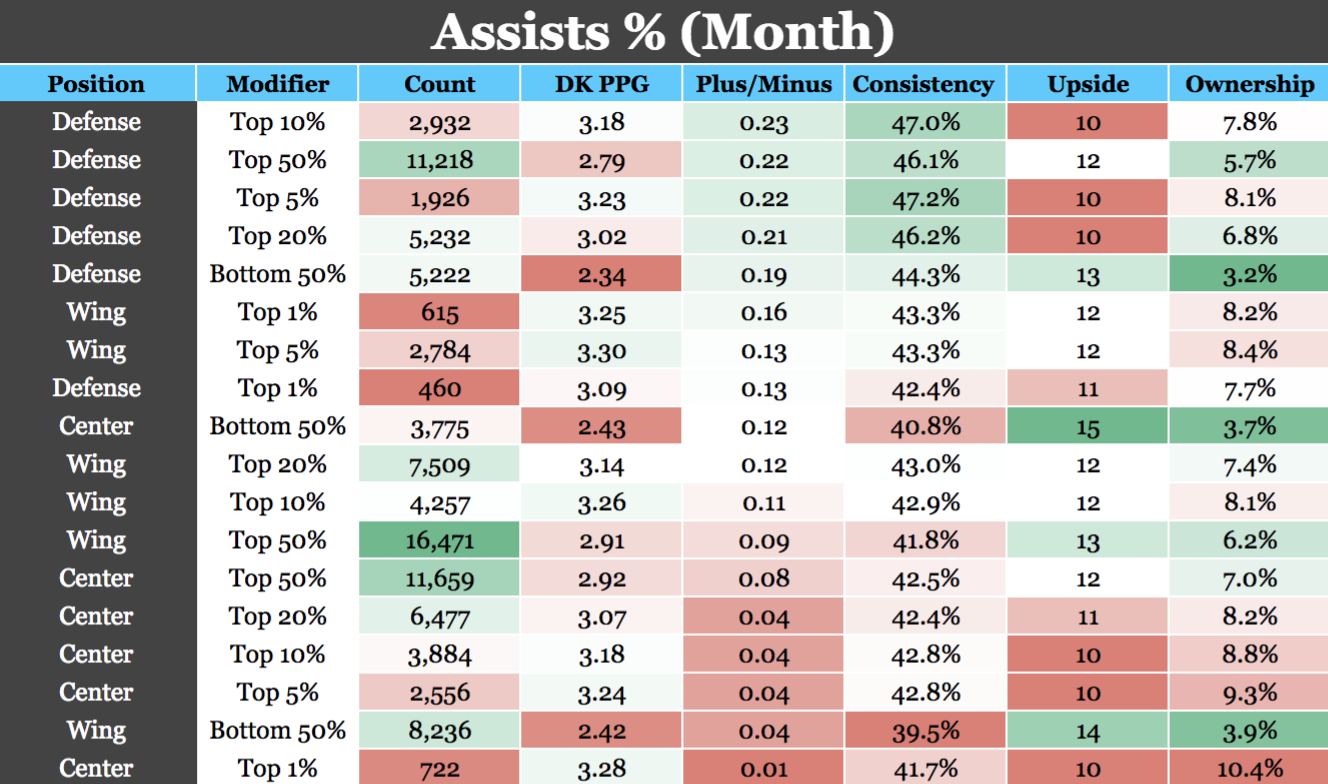 Per usual, power play defensemen dominate these charts, but it’s again notable that the Plus/Minus even at the high end of this metric underwhelms relative to the Plus/Minus of other peripheral stats.

It’s a small sample, but elite goal-scoring defensemen (like John Carlson) who reach the 99th percentile in goals are extremely consistent based on their salary-based expectations and should almost always be in consideration for cash games. Even so, a player who reaches this threshold is likely to be shooting the puck an elite rate as well. The edge in targeting exclusively goals and assists seems thin even at the high end.

Players in the bottom 50 percentile didn’t perform exceedingly poorly in either category, which probably means goals and assists don’t matter much. There could even be some noise as to what is actually most responsible for fantasy points from these players at the high end.

At forward, there’s an argument for rostering those who fall in the 99th percentile in goals or assists, but after that the Consistency and Plus/Minus drop off heavily. It makes the most sense to roster a guy like Nick Schmaltz (99th percentile in assists over the past month) to gain some correlation to an elite asset like Patrick Kane in large guaranteed prize pools. It is still hard to trust a player like Schmaltz in cash games.

Get an Edge in NHL DFS by Rostering Power Play Shooters

Why Time on Ice Is Overrated in NHL DFS