Should We Treat Shot Attempts Differently Than Shots on Goal?

With NFL officially over and NBA closing in on the tilt-fest that is post All-Star break, the natural progression for our subscribers is to dip their toe in DFS hockey. The impetus for this entire series comes from Jonathan Bales’ books, so the research process was d stolen from him.

That said, if you’ve watched any of our NHL Inside the Lab shows, you know it makes sense to target peripheral stats (shots and blocked shots) in comparison to less predictable events like goals and assists.

I certainly could just tell you to target shooters — or use hybrid stats like Corsi — but it’s possible metrics that offer slight differences from the widely used standards offer an edge. Shot “attempts” definitely qualifies as a small tweak that actually may be more representative than it seems on the surface.

As you can probably guess,  shot “attempts” include not just those that make it on goal, but also those that are blocked and/or miss the net entirely. Perhaps measuring how often a skater actually lets it rip could be a more positive indicator for fantasy success.

Using our Trends tool, we can compare the Plus/Minus values to both Consistency and Ownership. If you are still missing your FantasyLabs bachelor’s degree:

As always, we should probably identify a baseline trend before we get too deep. Perhaps a very basic peripheral stat trend, such as power play skaters in the 50th percentile or better in shots attempts over the past month would be a good starting point:

To keep building off of the past few weeks, the value of this article is probably comparing shot attempts to both shots on goal and Corsi. Here are the latter two charts again highlighting power play skaters using different percentile buckets for shots on goal and Corsi over the past month. More importantly, the impact on Plus/Minus in comparison to both Consistency and Ownership:

Now, shot attempts through the lens of all power play skaters before we break things down by position.

Unsurprisingly, the Plus/Minus is very comparable for shots on goal and shot attempts, but less linear correlation in regards to value and ownership definitely matters. In that regard, shot attempts may not be as underappreciated as Corsi, but let’s dive deeper into how shot attempts affect the value of different positions before we draw any further conclusions. 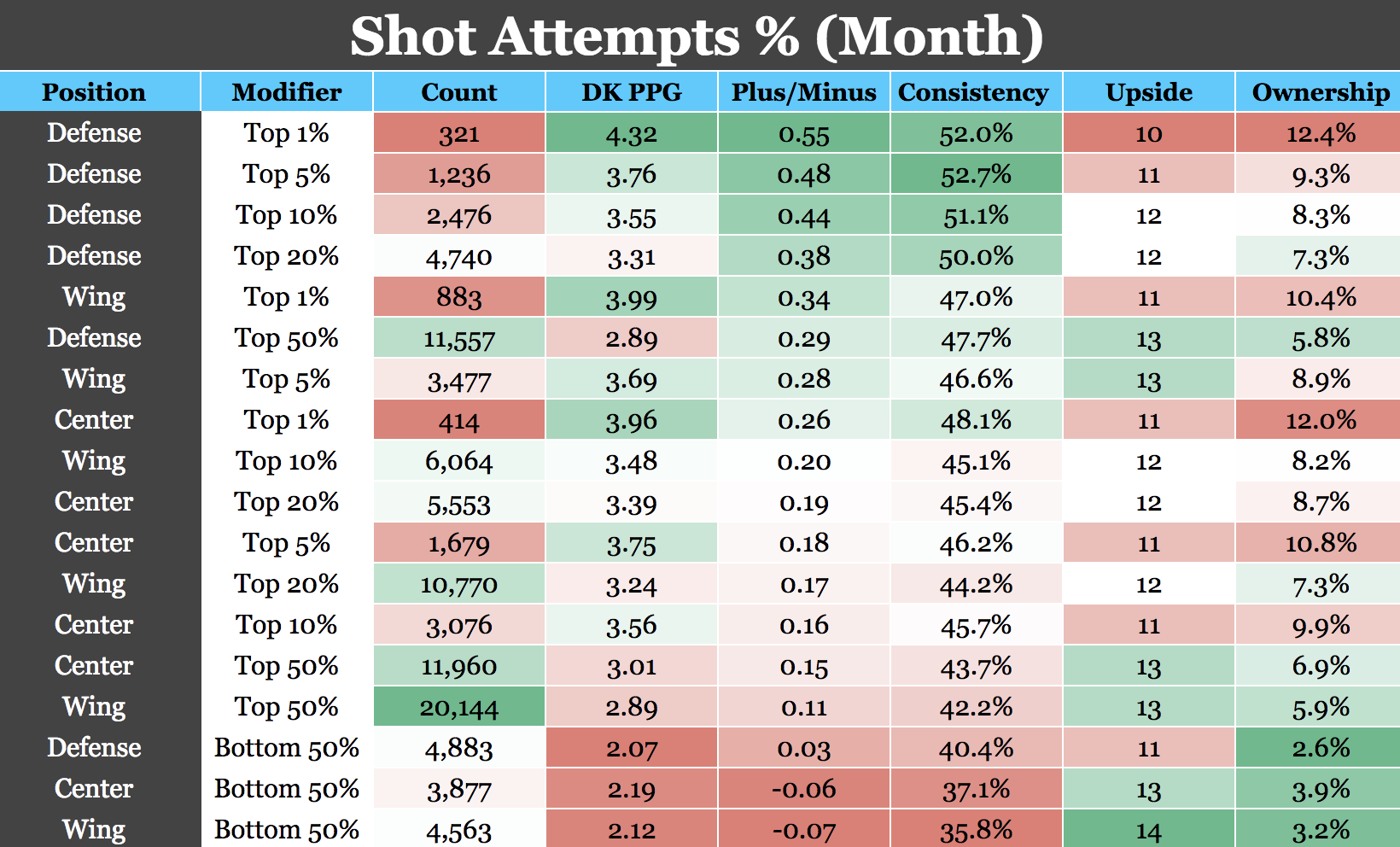 It makes a ton of sense that defensemen dominate this metric from a Plus/Minus perspective. Intuitively, shot attempts from further away would have a much better shot of being blocked or missing the net. By targeting defensemen that are attempting more shots it gives a better idea of who the true “shooters” are at the position. The upside is low, but that is likely because there are technically shot attempts that don’t even amount to fantasy points.

Paying up for defensemen like Roman Josi (97th percentile in shot attempts over the past month) is a great way to spend salary for cash games. If looking purely for upside, forwards still outperform defensemen overall.

Wingers in the top-five percentile bucket also performed well in shot attempts, but historically, the Corsi and shots on goal metrics provide more value and consistency. Vladimir Tarasenko (99th percentile in shot attempts over the past month) has been a staple of shot attempts, but he is also a player that is featured on the power play. From a real hockey perspective, that makes a lot of sense as his primary role on the power play is to take one-timers on the outside which is a very comparable depth as where most defensemen see their shot attempts from.

Centers who block shots provide a ton of value, but it appears shot attempts is a relatively poor predictive metric for the position in comparison to defensemen and wingers.