Why Time on Ice Is Overrated in NHL DFS

It’s not too late to dip your toe into daily fantasy hockey over the coming weeks as you prepare for MLB. Degeneracy is required around here.

I know what you’re thinking.

I definitely need to learn how to twitter better, but perhaps in the future I should just give the people what they want. Apparently, regular Action Network employee Jonathan Bales has it all figured out.

Another thing I stole from Bales was the impetus for this entire series, which comes directly from his books. Fair warning: Like my tweets, it will almost certainly be less entertaining and carefully researched.

If you’ve watched any of our NHL Inside the Lab shows, you know it makes sense to target peripheral stats (shots and blocked shots) in comparison to less predictable events like goals and assists. In order to accumulate peripheral stats, players need opportunity. In NHL, one of the main metrics used to measure opportunity is Time on Ice (TOI).

How effective is the metric from a fantasy perspective? Let’s find out.

Using our Trends tool, we can compare Plus/Minus values to both Consistency and Ownership. If you are new to Labs, allow me to tee things up for you.

Before we get too deep, we should identify a baseline TOI trend, such as power play skaters in the 50th percentile or better in TOI over the past month:

This includes skaters who have averaged roughly 14 minutes of ice time or more over the past month. It would be difficult to consider someone in our player pool who wasn’t hitting that TOI threshold.

The following charts highlight power play skaters using different percentile buckets for TOI over the past month. Here we can see the impact of TOI on Plus/Minus relative to both Consistency and Ownership:

There is a sharp drop off for skaters below the 50th percentile in TOI, but there’s not a significant increase in both Plus/Minus and Consistency at the high end. In comparison, peripheral stats like Corsi For see massive spikes in value in the top two buckets:

On the surface, there may not be a huge edge using TOI in comparison to other metrics, but let’s dive deeper to see if things change by position.

Each position has unique intricacies as to which stats strongly affect value, but the true edge comes in identifying which of these metrics are not typically priced into their salaries. This chart looks at players in the same percentile buckets as above, but it breaks things down by salary and has removed samples (counts) fewer than 25: 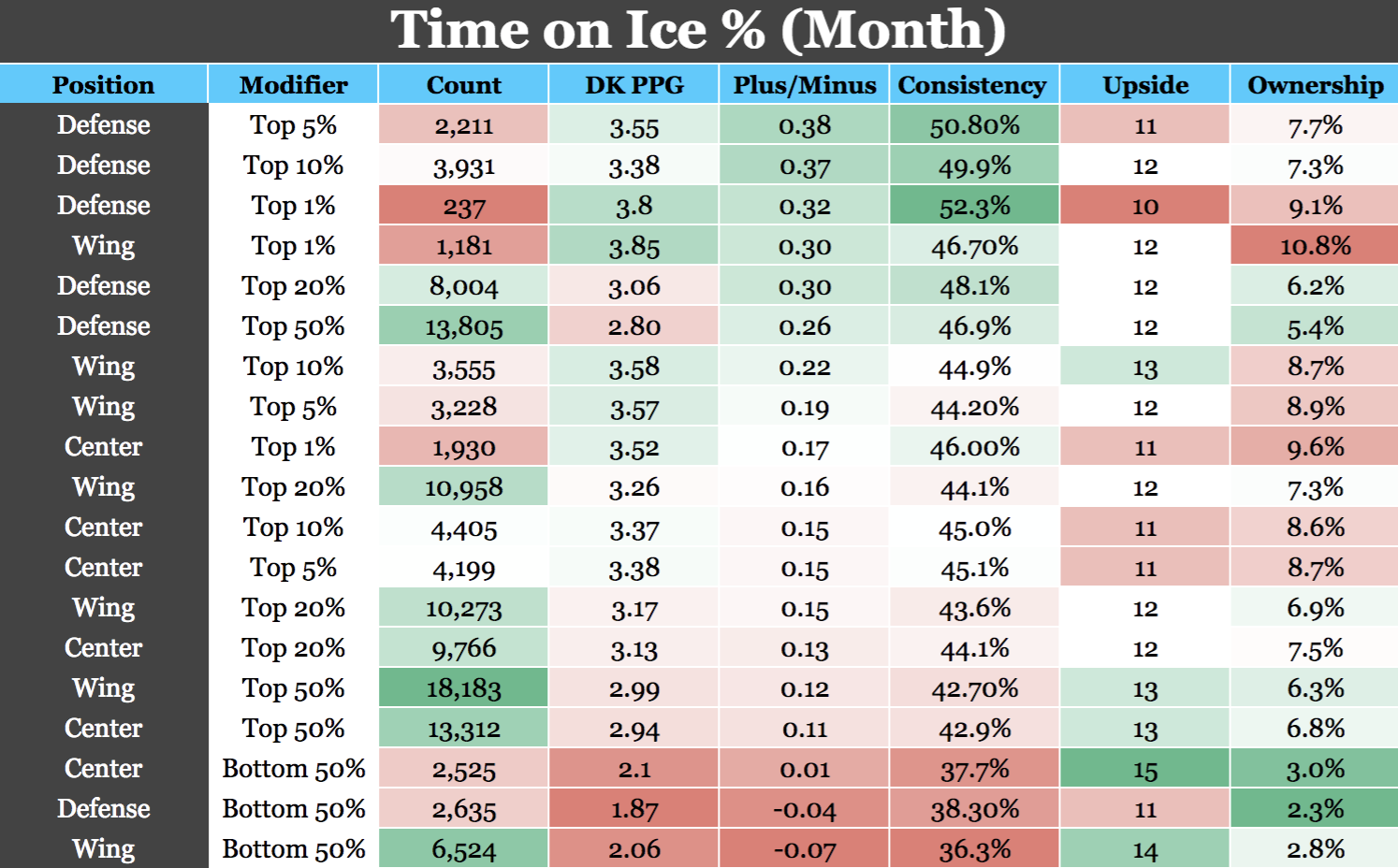 Even in the elite percentile buckets, relying solely on TOI underwhelms relative to peripheral stats and barely outperforms goals and assists. That in itself could be useful. Things like power play usage shot attempts are probably much more important. Quality over quantity.

Take a player like Jordan Staal. He’s cheap, and he currently ranks in the 93rd percentile in TOI over the past month, but at least in the short term he is essentially un-rosterable outside of correlating stacks. Why? Because he is in the 35th percentile in shots+blocks.

Rostering a young power play specialist like John Gilmour (59th percentile TOI) makes a lot more sense if you’re looking to save salary because he ranks in the 93rd and 90th percentile in shots+blocks and shot attempts.

There’s not a ton of upside here, but defensemen still lead the way in regards to Consistency, which is part of the reason we like to pay up for defensemen and find leverage in defensive defensemen. Defensemen like Drew Doughty, who fall in the 96th percentile in TOI and 95th percentile in shots+blocks, can certainly still be viable in cash games. Ultimately it seems that peripheral stats are superior to TOI, which at best is probably a decent a tiebreaker when two players are otherwise comparable.