Get an Edge in NHL DFS by Rostering Power Play Shooters

What NHL Metrics Should I Prioritize in my Models and Player Selection?

Many of our subscribers will be dipping their toes into DFS hockey, as we are still about a month away from MLB. So for a short time put down one of Jonathan Bales’ books; there’s plenty of time for that before baseball gets rolling. Think of the Metric Lab as a far less entertaining and carefully researched version for NHL.

If you’ve watched any of our NHL Inside the Lab shows, you know it makes sense to target peripheral stats (such as shots and blocked shots) instead of less predictable events like goals and assists.

I certainly could just tell you to target shooters — or use hybrid stats like Corsi — but it’s possible that other related but different metrics offer an edge, such as power play shot attempts.

As you can probably guess, power play shot attempts are measured only on the man advantage. These “attempts” include not just those that make it on goal but also those that are blocked and/or miss the net entirely. Perhaps how often a skater tees one up on the power play is a positive indicator for someone being featured when it matters most.

Using our Trends tool, we can compare the Plus/Minus values to both Consistency and ownership. For those of you who have no idea what I just said:

As always, we should identify a baseline trend before we get too deep. Perhaps a very basic peripheral stat trend, such as power play skaters in the 50th percentile or better in power play shot attempts over the past month would be a good starting point:

If we want to focus on those players being featured on the power play, it would be hard to consider someone in our player pool who doesn’t meet that type of benchmark.

The following charts highlight power play skaters using different percentile buckets for power play shot attempts over the past month. In these charts we can compare Plus/Minus to both Consistency and Ownership:

There’s a lot to unpack here, but outside of just our baseline trend it makes sense to analyze this through the lens of a traditional peripheral stat metric like shots+blocks as well:

The Plus/Minus is much stronger for something like shots+blocks, but the Consistency is very comparable, which suggests that power play shot attempts could be valuable, but shots+blocks offers a bigger edge if we take into account its greater independence from ownership.

Each position has unique intricacies as to which stats strongly affect value, but the true edge comes in identifying which of these metrics are not typically priced into the salaries. This chart looks at the same percentile buckets as above, but breaks things down by position and has removed samples (counts) of fewer than 25: 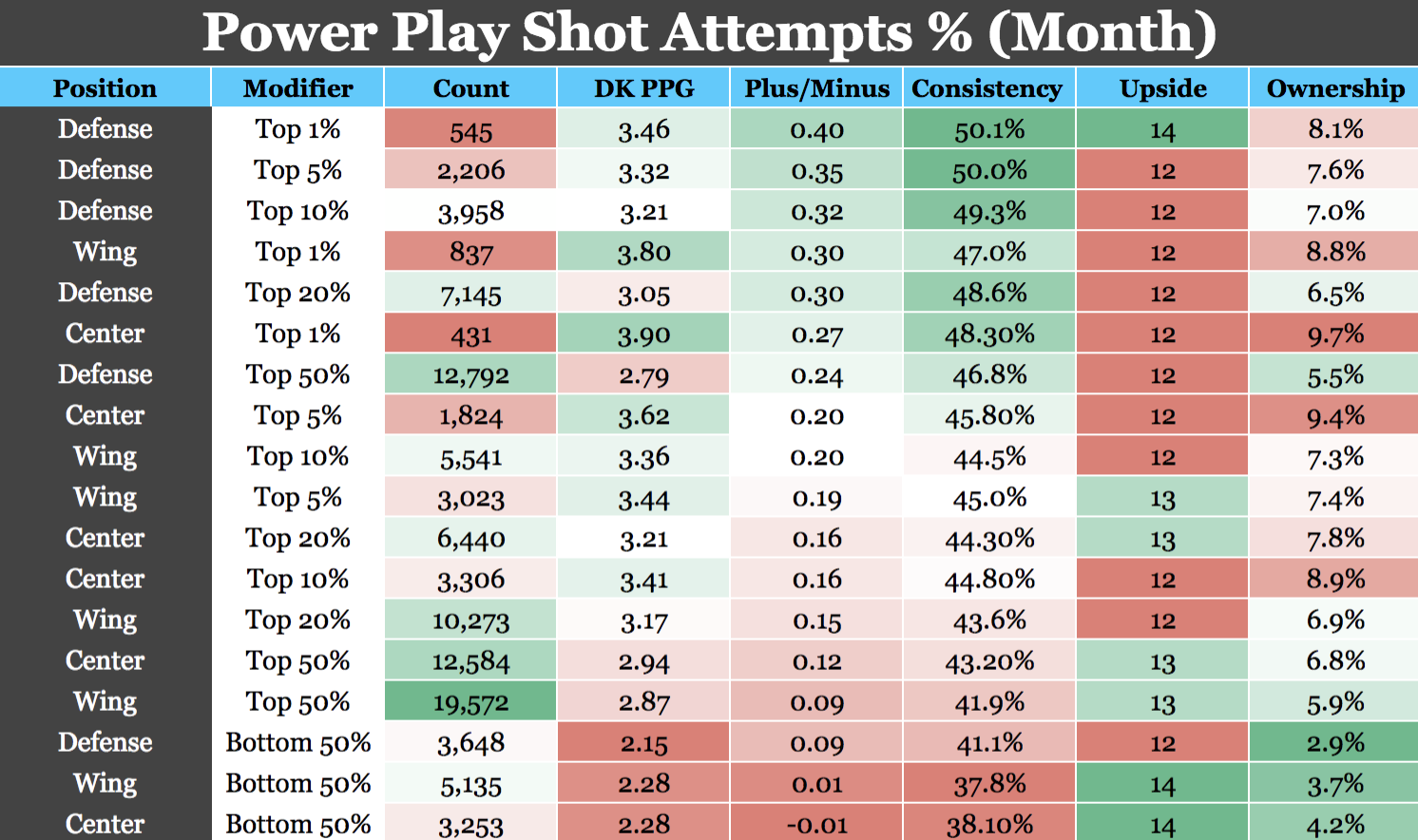 Per usual, defensemen in the top-10 percentile or better dominate this metric from a Plus/Minus and Consistency perspective. Metrics like shots+blocks and shot attempts (total) historically provide more value but also at an elevated ownership. What’s exciting is that power play shot attempts could offer similar value while also offering differentiation in large field guaranteed prize pools.

Intuitively, shot attempts from farther away would have a much better shot of being blocked or missing the net. However, by targeting defensemen who attempt more shots on the power play we get a better idea of who is truly being featured at the point. Notably, the Upside Rating is low in comparison to that of other metrics, but that is likely because included in this metric are shot attempts that don’t translate into fantasy points.

Targeting mid-ranged salaries for players like Justin Faulk (97th percentile in power play shot attempts over the past month) could be a great way to spend salary. If you’re looking purely for upside, you may want to look to other metrics, but differentiation is key if you can find comparable value.

The distinction seems to be less important for centers and wingers — with only those in the top-one percent presenting consistent relevance — but there are exceptions like Tyler Seguin and Vladimir Tarasenko (99th percentile in power play shot attempts over the past month), who might offer more value than expected.

Why Time on Ice Is Overrated in NHL DFS