This will be a common question for degenerates looking to dip their toe into DFS hockey over the coming weeks with NFL nearly on the back burner. If you’ve watched any of our NHL Inside the Lab shows, you know it makes sense to target peripheral stats (shots and blocked shots) in comparison to less predictable events like goals and assists. The largest question remains: what peripheral stats matter the most for each position?

The impetus for this entire series comes from Jonathan Bales’ books, but fair warning, it will almost certainly be less entertaining and carefully researched. I do promise to mention GrubHub slightly less. So there’s that.

Blocking shots is how you win real hockey games — and the same might true for DFS. On both DraftKings and FanDuel, blocks are worth as many points as shots on goal.

Using our Trends tool, we can compare the Plus/Minus values to both Consistency and Ownership. If you are new to Labs, allow me to hold your hand a bit longer:

Before we get too deep, we should probably identify a baseline trend. Perhaps a very basic peripheral stat trend, such as power play skaters in the 50th percentile or better in shot blocks over the past month would be a good starting point:

Now — with that out of the way — the following charts highlight power play skaters using different percentile buckets for blocked shots over the past month. More importantly, the impact on Plus/Minus in comparison to both Consistency and Ownership:

Unsurprisingly, skaters who block a ton of shots provide a ton of value, but the public tends to mostly ignore them until they reach the top-10 percentile. There is also a notable drop off in value for skaters after the top-5 percentile, but it’s possible this bucket includes players who are exceedingly expensive.

Let’s dive deeper into how blocked shots affect the value of different positions. 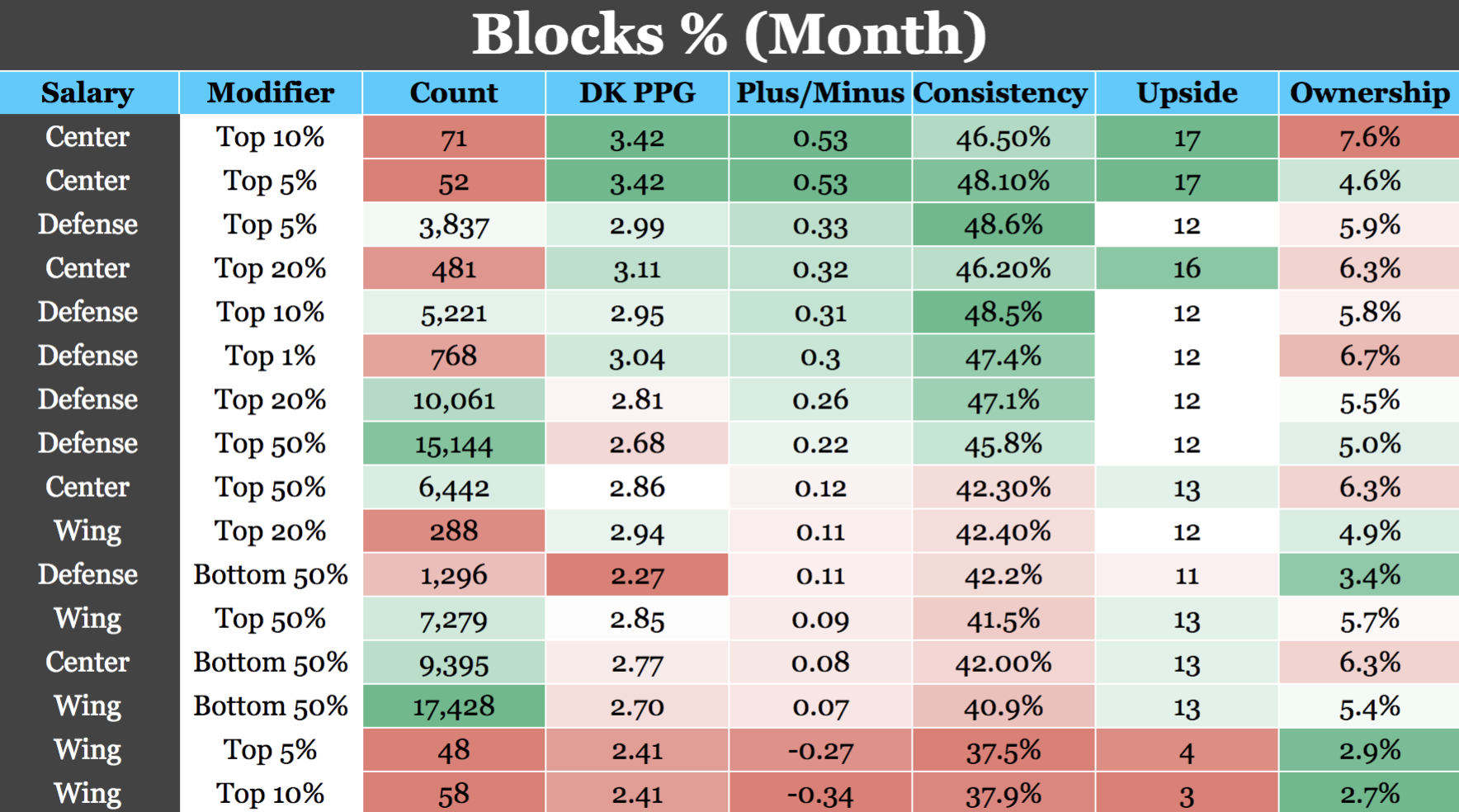 First, the counts are much higher for defensemen, as they tend to average more blocked shots than centers and wingers. However, it’s conceivable that centermen who block shots at an elite level like Auston Matthews (91st percentile in blocks over the past month) could provide more value in regards to their Plus/Minus, come in at slightly lower ownership, and also carry more upside.

Defensemen still lead the way in regards to Consistency, which is part of the reason we like to pay up for defensemen and find leverage in defensive defensemen. Players like Alec Martinez, who fall in the 99th and 50th percentile in blocked shots and shots on goal, can certainly still be viable in cash games.

Unfortunately, the same does not seem to be the case for wingers as targeting shot-blockers first makes for a weak standalone option. The edge at winger is probably exploiting splits — in combination with strong numbers in other peripheral stats like shots on goal —   WITH shot-blockers. A solid reference point should be a player like Patric Hörnqvist, who has value in the 61st percentile in blocked shots but also ranks in the 91st percentile in shots over the past month.