The natural progression for our subscribers with NFL winding down is to dip your toe into DFS hockey over the coming weeks. If you’ve watched any of our NHL Inside the Lab shows, you know it makes sense to target peripheral stats (shots and blocked shots) in comparison to less predictable events like goals and assists.

The impetus for this entire series comes from Jonathan Bales’ books, and I’m hoping if I keep including this in my introductions at least one of The Three Donkeys will support my next Vegas trip with some Titcoin.

Side note, I’ll never be known as The Labyrinthian, but I did just flawlessly slip Titcoin into an article about DFS hockey.

Today we will attempt to answer another important question: is there value in combining shots and blocked shots into one metric?

Targeting players who shoot is just one example in which you can find immediate short-term value using our Trends tool. As always, we will focus on Plus/Minus and Consistency, but there’s a huge edge in identifying which metrics drive Ownership. For those of you that have no idea what I just said:

We should probably identify a baseline trend. Perhaps a very basic peripheral stat trend, such as power play skaters in the 50th percentile or better in shots+blocks over the past month would be a good starting point:

Also, this article should probably compare shots+blocks to other peripheral stat metrics like part one and part two of this series. Here are those charts again, highlighting power play skaters using different percentile buckets for shots on goal and blocks over the past month. More importantly, the impact on Plus/Minus in comparison to both Consistency and Ownership:

Now, what happens if we combine those two stats into one metric?

We know ownership closely mirrors shots on goal. However, on the surface — before breaking down by position — shots+blocks provides far more value and consistency than simply targeting shots or blocks individually. Nearly across the board. What matters for DFS purposes is shots+blocks is the perfect combination of an increase in value and separation in ownership. That’s a massive edge.

Let’s dive deeper into how shots+blocks affect the value of different positions.

Even though we’ve already identified an inefficiency in the public, the true edge probably comes from figuring out which position to weigh this metric most heavily in our decision-making process. This chart looks at the same percentile buckets as above, but breaks things down by position: 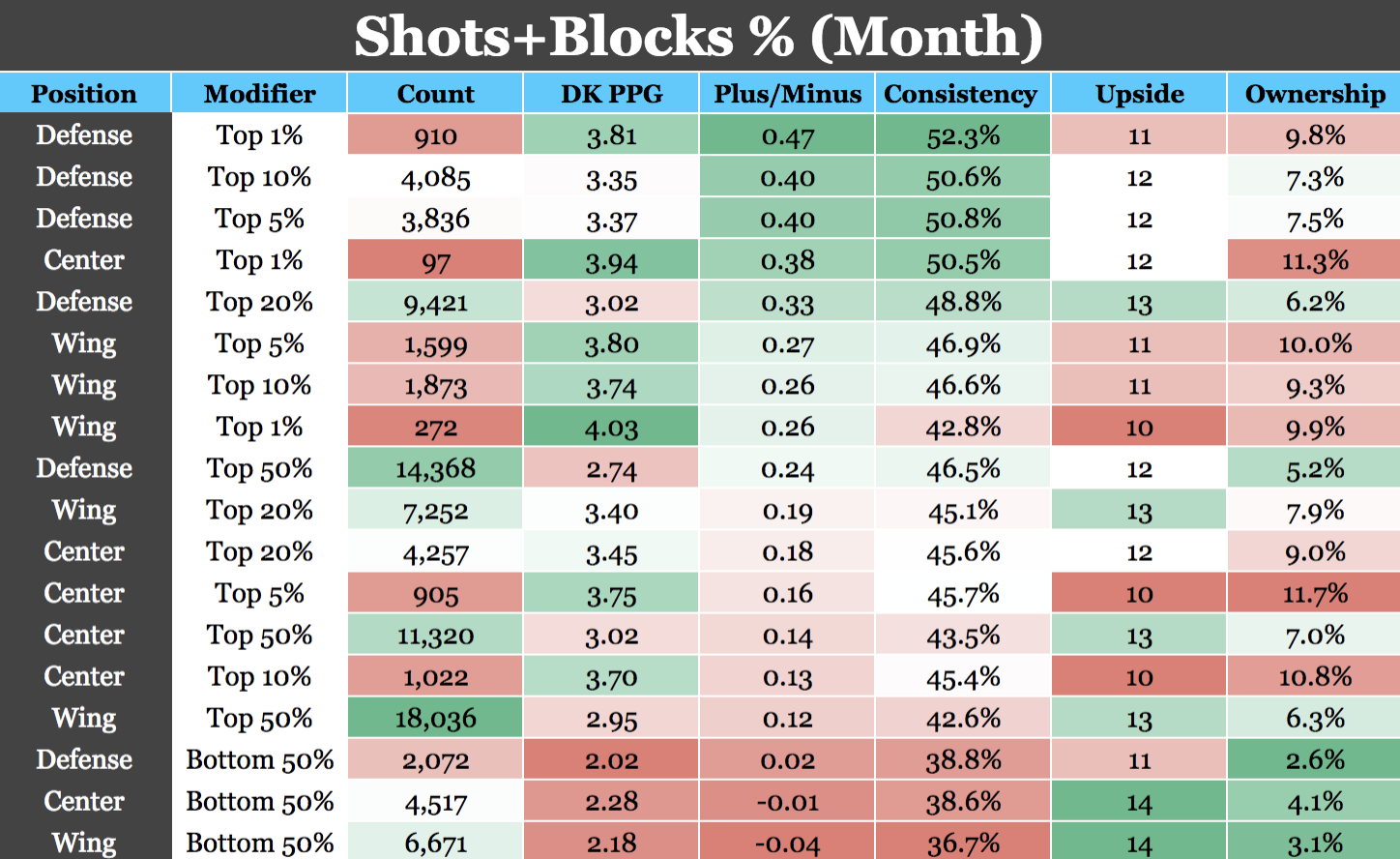 Unsurprisingly, defensemen still lead the way in regards to Plus/Minus and Consistency, which is part of the reason we like to pay up for defensemen. The clear poster boy for shots+blocks is Brent Burns (99th percentile over the past year and also in the short term over the past month), which is why he’s nearly always in play for cash games. Overall, the Upside is middling for shots+blocks even in the top one percent bucket, but the Consistency bump implies a strong floor at the top end.

There is value in targeting centers who block shots and also shoot, like Patrice Bergeron (97th percentile in shot+blocks over the past year), so it makes sense that these type of players are the only ones to threaten defensemen in this metric. That said, there is a huge drop off after the truly elite sample in the top one percentile bucket. Wingers hold much stronger value in the top 20 percentile overall. Wingers like Evander Kane (90th percentile in shot+blocks over the past month) can offer some degree of safety at the least consistent skater position.

The good news is, we are making some serious progress. Here are the top-2 buckets (so far) for each position sorting by Plus/Minus and Consistency:

Be sure to follow along with The Metric Lab as I will be updating this chart as we move forward.