Shooters Shoot: How to Target Shots in NHL DFS

This is probably the most important question to answer if you are new to DFS hockey. The impetus for this entire series comes from Jonathan Bales’ books, but as you know, it will be far less entertaining and I will almost certainly be recycling jokes from previous NHL content. It was either that or going with Bales’ advice instead:

That’s my boss. Or maybe he’s just a regular Action Network employee? I’m never quite sure.

I digress. If you’ve watched any of our NHL Inside the Lab shows, you know it makes sense to target peripheral stats. The largest question remains: what peripheral stats matter the most for each position?

Let’s dive back in.

The upside with targeting shots over blocked shots is pretty simple: small events (shots) are exactly what lead to less predictable — but often more significant — events like goals and assists.

Using our Trends tool, we can compare the Plus/Minus values to both Consistency and Ownership. For those still rocking with training wheels:

As always, we should probably identify a baseline trend before we get too deep. Perhaps a very basic peripheral stat trend, such as power play skaters in the 50th percentile or better in shots on goal over the past month would be a good starting point:

Further, the following charts highlight power play skaters using different percentile buckets for shots on goal over the past month. More importantly, the impact on Plus/Minus in comparison to both Consistency and Ownership:

Unsurprisingly, ownership much more closely mirrors shots on goal than blocked shots. The spike in Plus/Minus for skaters in the top five percentile is notable, as that the complete opposite occurs for blocked shots. On the surface, it seems to be worth it to eat the chalk by paying up for elite shooters.

Let’s dive deeper into how shots on goal affect the value of different positions. 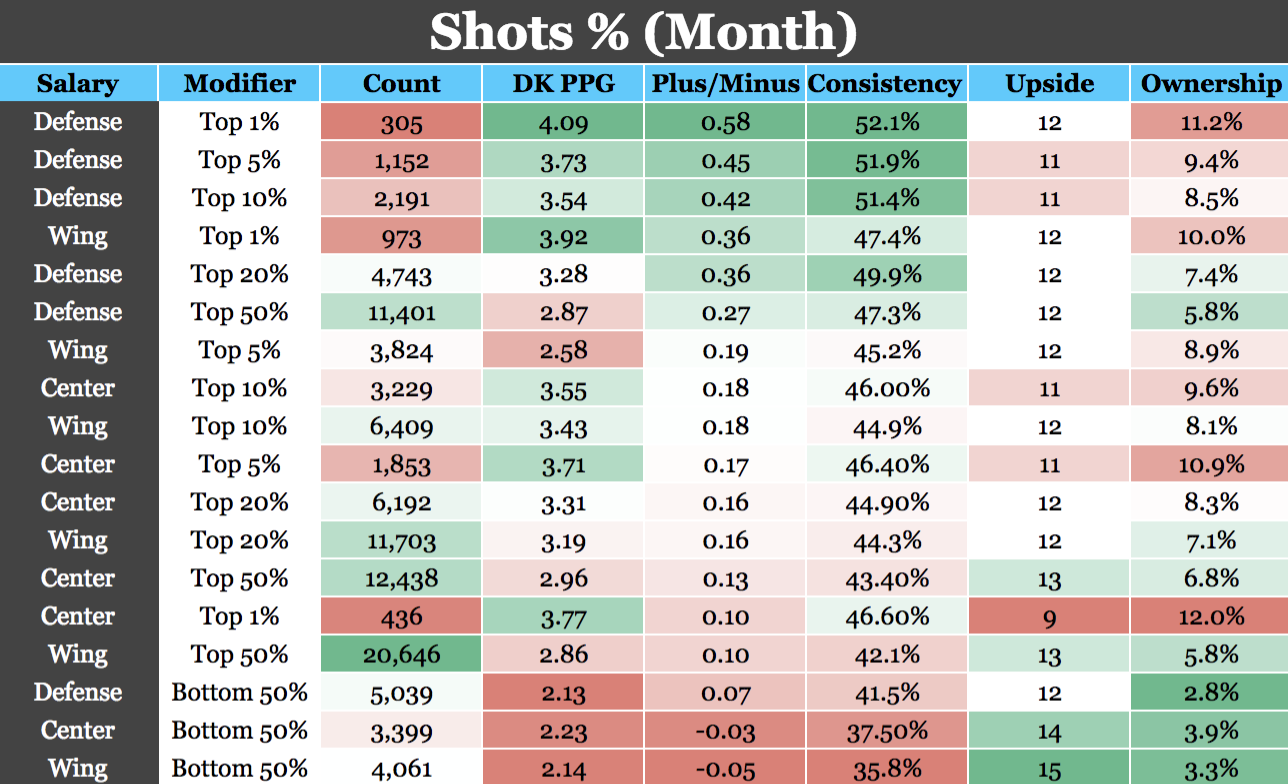 Defensemen still lead the way in regards to Plus/Minus and Consistency, which is part of the reason we like to pay up for defensemen. Targeting offensive defensemen like Victor Hedman (99th percentile in shots over the past month) is a great way to spend salary for cash games. If looking purely for upside, forwards still outperform defensemen in this metric.

One last note on defensemen, they tend to get the most shots blocked of any position, so it’s possible “shot attempts” could be much more representative as “shots” only counting those attempts that actually made it on the net. A Metric Lab for another day my friends.

The counts are much higher for wingers, which intuitively makes some sense. Most defensive systems are designed to clog up the middle of the ice, so wingers can grease a ton of shots on the outside lanes entering the zone on offense. Purely from a real-hockey and opportunity perspective, a winger’s value is usually derived from a high volume of shots becausetheir opportunities are limited to accrue peripheral stats in the defensive zone. See the most simple defensive zone coverage diagram I could find: 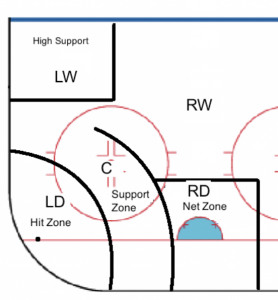 Part of a winger’s role in the defensive end is to cover the point (high support), but it is much more difficult to block shots from close range than for centers and defensemen (C and RD in this diagram). In theory, they have much more time to react and block the opposition’s point shots. Also, if you think superstar wingers like Alex Ovechkin or Patrick Kane (97th percentile shots, 7th percentile blocks over the past month) are blocking a shot from close range, you clearly have never watched them play defense. But they are elite shooters and therefore still have a ton of value in DFS hockey.

Which brings us to center, which makes for an inverse comparison of our analysis of wingers who fail to block shots. Targeting shooters first makes for weak standalone options at center. Centermen who shoot but also block shots at an elite level like Auston Matthews (96th percentile shots, 83rd percentile blocks over the past month) are probably better cash game options, but someone like Steven Stamkos (93rd percentile shots, 18th percentile blocks over the past month) could be better suited for guaranteed prize pools.