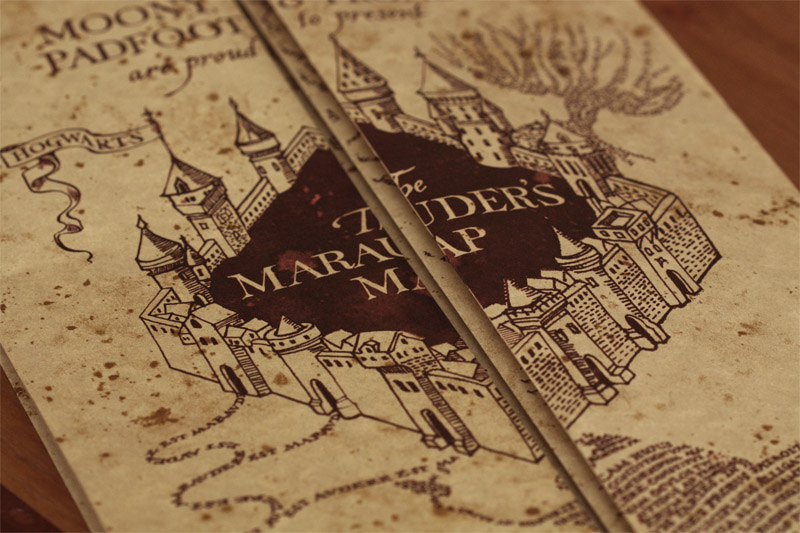 Within this series, I’ve written about the importance of value investing and the inapplicability of the stock market analogy to the one-day format of fantasy sports. In this piece, I want to explore the strategy of diversification in investing, fantasy sports, and ultimately in fantasy sports-as-investing. As a big-picture concept, diversification is fairly easy to grasp — and that might be why so few people really understand its subtleties.

This is the 16th installment of The Labyrinthian, a series dedicated to exploring random fields of knowledge in order to give you unordinary theoretical, philosophical, strategic, and/or often rambling guidance on daily fantasy sports. Consult the introductory piece to the series for further explanation.

Diversification: How to (Mis)use It

In a recent Daily Fantasy Sports Roundtable covering the topic of NBA cash game strategies, I asked FL managing director Justin Phan what criteria he uses to determine if a lineup is truly optimal. Justin does not merely accept the “optimized lineup” that a model generates. For instance, once a lineup is generated Justin continues to tweak the lineup until he feels that he has an entire squad of players who collectively provide a margin of safety — consistent players who have elevated projection floors and whom he anticipates will have regular minutes.

When creating an optimal lineup, a number of relevant factors may be considered, among which are Projected Plus/Minus and Bargain Rating. In many cases, diversification should also be a consideration. Take this optimal DraftKings NBA lineup created from the Bales Model at 7:15 AM ET on Feb. 29, 2016: 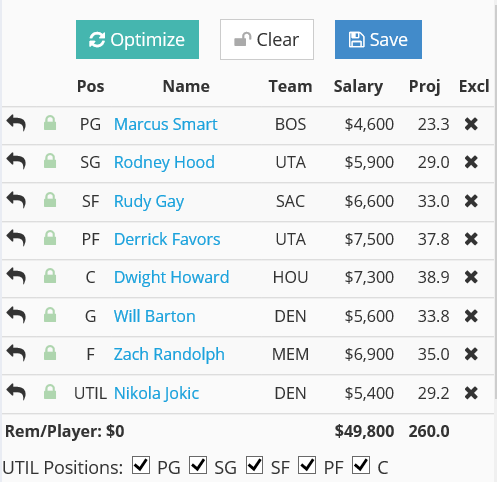 This is a lineup that Justin would almost certainly not use, in part because it has two pairs of teammates (Utah’s Rodney Hood and Derrick Favors and Denver’s Will Barton and Nikola Jokic), and it also has two players who are separately competing in the same contests as those stacks (Boston’s Marcus Smart and Memphis’ Zach Randolph). The problem is not that any of those given players are horrible DFS options on their own. The problem is that in a lineup with eight players, 50 percent of them are from only two teams and 75 percent of them are from the same two games. This is an undiversified lineup, and in cash games diversification is usually a virtue.

Of course, diversification isn’t the golden rule. Just as different investment strategies are more ideal than others depending on the markets and sectors of various opportunities, in tournament lineups stacking may be more suited than diversifying. On a DFS Roundtable covering contrarian strategies, Bryan Mears noted that stacking in NBA tournaments can increase the probability of creating unique lineups. Additionally, in other sports, such as NFL or MLB, stacking can be a means of leveraging, of increasing the correlation within a lineup to provide for outsized production potential. Diversification is a structural means of creating safe lineups, and in tournaments safety isn’t a high priority, so not diversifying would in many cases likely be the optimal strategy.

Insofar as diversification is a method through which one can ensure limited exposure to potential outcomes, it has great use.

Of course, that last sentence makes a couple of assumptions. First, it assumes that you want limited exposure, which we have seen already is likely not the case in tournaments. Secondly and more importantly, it assumes (through the phrase “insofar as”) that diversification actually ensures limited exposure.

Sadly, in the way that many people financially think of and employ diversification, it actually doesn’t.

On the one hand, lots of people think that they need to be invested in at least 20 different stocks to have strong diversification. (Also note that people tend to think about diversification only in the context of the stock market. We’ll return to this point later.) The truth is that with as few as eight stocks, one could have sufficient diversification in an equally weighted portfolio.

On the other hand, that last sentence is misleading. Holding eight stocks is probably enough to keep a portfolio from being destroyed by one bad investment — but not by the entire market collapsing. If the economy enters a recession, it doesn’t matter whether you’re holding two or 2,000 companies: The odds are high that the total portfolio will depreciate in value. In this market, diversification is the smallest of moats surrounding the castle.

When it comes to stocks, diversification mitigates only a (small) portion of the total investment risk. The larger portion of the risk, unaddressed (and perhaps obscured by the myth of diversification), is what is commonly called “market risk,” which exists because all companies are tied to the same core factors and are part of the same expansive ecosystem. If one sector of the economy collapses (like the housing market in 2007), then other sectors could collapse too, because they are all interconnected and dependent upon each other.

These macro dynamics, though, do not apply in fantasy sports (which is another reason that the stock market is not analogous to DFS). By and large, excluding instances of randomness or extraordinary specificity, what happens in one game has no bearing on what happens in another game being played at that same time. If one night LeBron James scores 50 fantasy points against the Bulls, his doing so will have no impact whatsoever on Russell Westbrook’s performance in another contest that same night.

In this one regard, as strange as this sounds, playing DFS as a form of investment might actually be safer than playing the stock market.

Let’s return to the slate for today. If we look at the 7:00 PM ET offering on DraftKings, we’ll see that there are seven games (and thus 14 teams) from which to choose eight players. Although this means that we must have in any lineup at least two players from the same game, near-perfect diversification is possible. And maybe it’s even preferable: 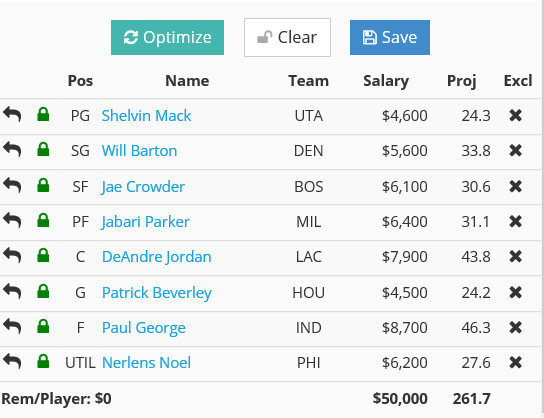 I’m not going to say that this lineup is actually better than the optimal lineup produced by the Bales Model or that you should actually use this exact lineup in your cash game contests tonight. But it does have a higher projected total and greater diversification. As this lineup suggests, it’s very possible that building diversification into your lineups doesn’t mean that you have to sacrifice production. It’s probable that in bigger slates you can have lineups that are diversified and productive. In other words, optimal.

I’ve encouraged you to practice various tournament strategies in small slates, but I’ve also cautioned against playing cash games in such slates. Many reasons exist for avoiding cash games based on no more than a few professional contests — but the inherent lack of diversification available in such a slate is one of the most important.

In some sports, such as MLB, diversification very well might be a suboptimal feature of cash game lineups. That is possible. In general, though, regardless of the sport, cash games are best played in slates in which diversification is at least an option.

Well, for starters, a more complete form of DFS diversification would involve playing across a larger number of sports — NBA, MLB, PGA, NFL, NASCAR, MMA, eSports, etc. — so that, for instance, if you aren’t as good as you think you are at NBA DFS, you don’t lose all of your DFS bankroll.

Of course, this truer type of diversification in many cases is hard to achieve, because it requires more research and knowledge. Being diversified in this manner is more of a grind. But in theory this macro DFS diversification makes sense. Just as it’s risky to have 100 percent of your stock portfolio invested in only one industry, it’s risky to play 100 percent of your action in only one sport. Being truly diversified across DFS is a goal to which we should aspire, even if it’s destined to be a goal unfulfilled.

But an even truer form of DFS diversification exists, and in considering it we should return to the notion that when people think about diversification within the context of investing, they almost universally think about only the stock market. This is the biggest mistake that investors make. They needlessly and arbitrarily narrow the frame of context.

When pondering diversification, many investors say something like this to themselves: “I own shares of 10 different companies in 10 different sectors, so I’m diversified.” That’s blatantly wrong.

What they need to be thinking is something like this (especially if they are DFS players):

Clearly, whatever risk tolerance and DFS competence you have will determine the percentage of your total investable income committed to DFS. For one person, that might be three percent. For another, that number might be 30 percent — and yet that second person might actually be taking on less risk because of vastly superior DFS ability. The percentage of your money that you put toward DFS is up to you.

The larger point is that, if you want to have the truest form of DFS diversification possible, you shouldn’t put all of your investable money into your DFS bankroll.

The Marauder’s Map of Your Mind

As you look at that mental map, the important thing is to identify where you want DFS to be: Sitting in the Room of Fun — which is actually a fun place to be — or moving along the Hallway of Investment, determined to weave through the throng of Frankie First Years in order to reach the Chamber of Riches. And, by the way, moving through a crowd of people, as if you’re a running back, can also be fun. Don’t confuse the way you feel with the space that you’re in. Having fun in the Hallway of Investment isn’t the same as being in the Room of Fun.

Either location is fine, but you need to decide which location you prefer, because that will ultimately determine both how you allocate money to DFS (is this leisure money or investment money?) and the amount or percentage you allocate.

Before you can even decide how to diversify, you need to know why you play DFS in the first place.

Previous installments of The Labyrinthian can be access via my author page. If you have suggestions on material I should know about or even write about in a future Labyrinthian, please contact me via email, [email protected], or Twitter @MattFtheOracle.