What Is Corsi? Why It Matters in NHL DFS

This will be a common question for degenerates looking to dip their toe into DFS hockey over the coming weeks with NFL on the back burner. This time of year, most of you are probably crushing one of Jonathan Bales’ books before MLB starts. That alone is probably a positive expected value move but think of the Metric Lab as a far less entertaining and carefully researched version for NHL. Unlike Bales, I do promise to keep dick jokes to a minimum.

I digress. If you’ve watched any of our NHL Inside the Lab shows, you know it makes sense to target peripheral stats. But what about hybrid stats like Corsi?

The bigger question for most of you: What the hell is Corsi?

Baseline Trend and Corsi For % (Month)

The argument for targeting shots over blocked shots is pretty simple: small events (shots) are exactly what lead to less predictable — but often more significant — events like goals and assists. So we are always looking for different versions to target the same thing to gain an edge. Corsi just so happens to be awesome.

If you google Corsi you get a detailed (and likely confusing) definition:

Essentially this is all you need to know:

With that finally out of the way, using our Trends tool, we will continue to compare the Plus/Minus values to both Consistency and Ownership.

Today’s baseline trend features power play skaters in the 50th percentile or better in Corsi For over the past month:

Also, the value of this article is probably comparing Corsi to Shots, so here’s that chart again highlighting power play skaters using different percentile buckets for shots on goal over the past month. More importantly, the impact on Plus/Minus in comparison to both Consistency and Ownership:

Drumroll… now that same chart for Corsi For:

Intuitively, it makes sense that Consistency and Ownership are almost identical. However, two things stand out right away in regards to Plus/Minus.

I lean towards the latter because unlike shots, the counts (samples) are much lower for the top five percent Corsi For skaters. Let’s dive deeper into the different positions. 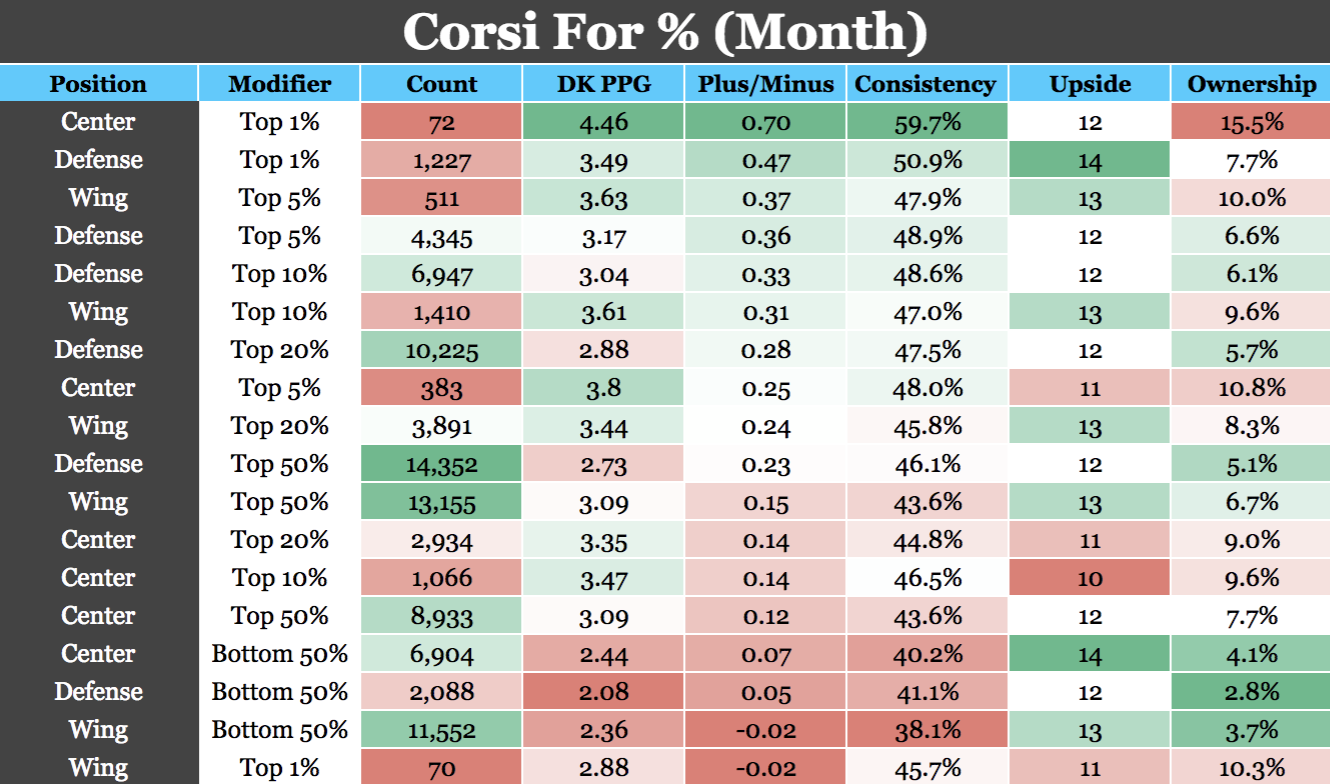 It’s a small sample, but elite Corsi For centers like Connor McDavid (99th percentile over the past month), are extremely valuable based on their salary-based expectation and should almost always be in the conversation for cash games. The upside for centers in the 95th and 99th percentile is also much higher than targeting shots (10 and 12 respectively).

The 59.7 percent Consistency for top-one percent Corsi centers is the highest of any single metric — for any position — in our entire NHL database. Spoiler alert: this destroys the other positions where top-five percent shot attempt defensemen (52.7 percent) and top-one percent power play shot wingers (48.1 percent) lead the way.

We like to pay up for defensemen because they can be peripheral stat monsters, so it’s not surprising to see them lead the way in terms of overall sample size at the top end of Corsi For. Brent Burns (99th percentile Corsi for over the past month and year) sets the ceiling in DFS hockey yet again. Some would say he’s #good.

One last note. It’s interesting that top-one percent Corsi For wingers performed very poorly relative to the other percentile buckets. This could be noise — given how strong the top-five percentile bucket performs highlighted by players like Patrick Kane (98th percentile in Corsi For over the past month) — but it does provide caution as to the validity of the small centerman sample in this bucket as well.