Week 12 Fantasy TE Breakdown: How Much Vance McDonald Is Too Much?

The Week 12 NFL main slate kicks off on Sunday, Nov. 24, at 1 p.m. ET. In this piece, I highlight the tight ends who stand out in our large suite of analytical DFS Tools, most specifically the industry-leading FantasyLabs Models.

Odds as of Friday afternoon and via PointsBet, where Action Network users can access an exclusive promotion to get a 200% deposit match (deposit $50, bet with $150). No strings attached. No rollover required.

UPDATE (Nov. 23): WR Nelson Agholor (knee) did not practice all week and looks to be on the doubtful side of his questionable status.

Travis Kelce is on bye, and George Kittle is on Sunday Night Football, so Ertz is the only Big Three tight end available on the main slate. It’s just that kind of week.

The good old days are gone. Ertz is no longer a matchup-proof tight end.

The consensus opinion entering the season was that Ertz was due for regression. Last year, among all players (not just tight ends), he was No. 2 with 116 receptions and No. 6 with 156 targets. He was No. 4 with 27 red-zone targets. He was the team leader with 1,163 yards receiving, 1,473 air yards and yards after the catch combined and eight touchdowns. He had career-highs in games played, targets, receptions, touchdowns and catch rate.

With all of the other pass-catching options on the team, how could he hit those numbers again?

For the most part, the concerns for Ertz have been justified (per our FantasyLabs Trends Tool).

Perusing Ertz’s 2019 stat line is like looking at George Costanza’s 1992 hair line. “He’s not bald. He’s balding.” On a per-game basis, Ertz is No. 2 at the position in usage with 13.6 expected fantasy points but No. 89 in efficiency with -0.5 fantasy points over expectation (per RotoViz Screener).

In only one game has Ertz had a truly difference-making performance (per RotoViz NFL Stat Explorer). 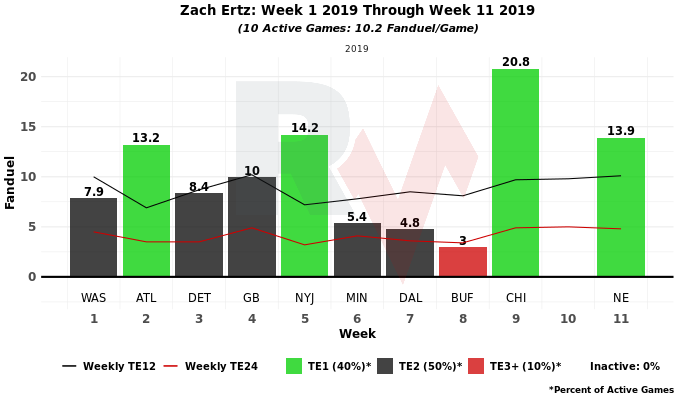 But in each of the past two games, Ertz has gotten double-digit targets and been a top-six fantasy tight end. And given that Kelce and Hunter Henry are both on bye, Ertz leads all tight ends this week with 92.9 air yards and yards after the catch per game (per AirYards.com). He still has the potential to go off.

Slot receiver Nelson Agholor (knee) is dealing with an injury and is yet to practice this week. He’s reportedly “trending in the right direction,” but if he doesn’t suit up, Ertz could see extra action. In his three games this year in which Alshon Jeffery has played minimally or not at all, Ertz has averaged 11.3 targets per game. I would expect Ertz to have comparable usage in an Agholor-less game.

Ertz has a decent matchup. The Seahawks are No. 23 in pass defense DVOA against tight ends (per Football Outsiders). Safeties Bradley McDougald and Quandre Diggs can both be passed on: McDougald has a 66.4% catch rate allowed for his career, and Diggs has a 72.2% mark (per Pro Football Focus).

The Seahawks have had a relatively easy schedule of opposing tight ends, but in Week 8, they did yield 15.5 FanDuel points and 6-65-1 receiving on seven targets to the comparable Austin Hooper.

If the Eagles choose to target Ertz, he will probably have success.

Since he became a key contributor in 2014, Ertz has notable splits, and he’s on the positive side of them this week.

I probably won’t have Ertz in cash games because I prefer to pay down at the position, but he’s an option in guaranteed prize pools. With his recent usage and in this spot, he definitely has 100-yard, multi-touchdown upside. Ertz leads the position with his median, ceiling and floor projections in our Models.

Ertz is specially attractive on FanDuel, where he has a position-high +3.09 Projected Plus/Minus and is the No. 1 tight end in the Bales, Levitan, Koerner, Raybon and SportsGeek Models.

Ertz is also the No. 1 tight end in our Week 12 fantasy football rankings.

But the past month hasn’t been so good. Since wide receiver Tyrell Williams returned from injury in Week 8, Waller is tied for No. 1 on the team with 5.5 targets per game, but he’s No. 3 with three receptions, 45.3 yards, 64 air yards and yards after the catch and 0.25 touchdowns per game.

And 5.5 targets isn’t all that great for a guy with one of the position’s highest salaries.

And his matchup is tough. The Jets have held opposing tight ends to the fourth-fewest FanDuel points with 7.2 per game. Pro-Bowl safety Jamal Adams is working on back-to-back seasons as a top-five pass defender with an 86.7 PFF coverage grade this year and an 89.6 mark last year. For his career, he’s allowed a catch rate of only 57.3%.

With his recent usage and difficult matchup, Waller is too risky for cash games. But he’s in play for tournaments. No tight end has more 100-yard games this year than Waller.

Waller has position-high marks with 10 Pro Trends and a 99% Bargain Rating on FanDuel, where he’s the No. 1 tight end in the CSURAM88 and Freedman Models. He is also the top option in the Levitan Model for DraftKings.

The thesis for investing in McDonald is pretty straightforward.

He’s relatively cheap on DraftKings at $3,500, so he provides roster flexibility. He also offers value: He has the No. 12 salary at the position but the No. 6 median and ceiling projections. And he’s likely to have a sub-5% ownership rate in tournaments, so he can help to differentiate lineups.

In two of his nine games this year, McDonald has reached his GPP-winning potential for fantasy TE1 performances. 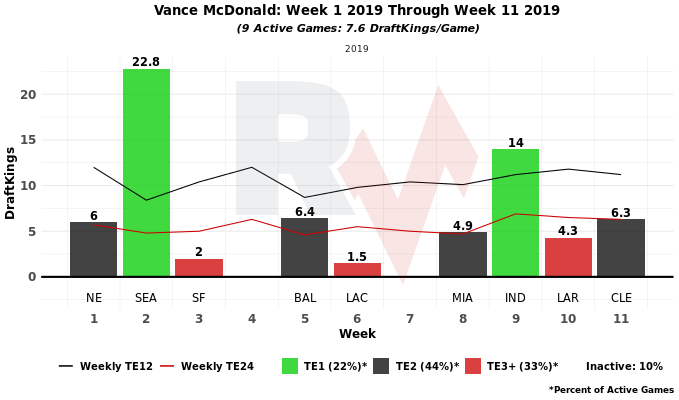 Wide receiver JuJu Smith-Schuster (concussion, knee) is unlikely to suit up, so there could be more middle-of-the-field targets available for McDonald, and since the Week 7 bye he has averaged a respectable 6.3 targets per game.

And the matchup is great. The Bengals are No. 31 in pass defense DVOA against tight ends. Safeties Jessie Bates III and Shawn Williams have conspired to allow a combined catch rate of 78% this year.

Just last week, the Bengals allowed a 7-86-1 receiving line on nine targets to Darren Waller and Foster Moreau. The week before that, they allowed 12-151-2 receiving on 14 targets to Mark Andrews, Nick Boyle and Hayden Hurst.

Teams that use their tight ends have consistently punished the Bengals this year, and McDonald is likely to get usage this week.

I can’t believe I’m putting this in writing: I don’t hate McDonald for cash games. If you’re looking to pay down at the position, he might be your guy. Again, it’s just that kind of week.

McDonald is the No. 1 tight end in the Bales, CSURAM88, Koerner, Raybon and Freedman Models for DraftKings, where he has a position-high +1.74 Projected Plus/Minus.

UPDATE (Nov. 23): WRs Mohamed Sanu (ankle) and Phillip Dorsett (concussion) are questionable but expected to be out. Cowboys LB Leighton Vander Esch (neck) is out.

Better your lineup than mine. That’s all I’m saying.

In his four games with the team, Watson has had 3.8 targets per game with an 81% snap rate. And over the past two games, those numbers have bumped up to 4.5 and 89%.

The Patriots are likely to be without slot receiver Mohamed Sanu (ankle), and wide receiver Phillip Dorsett (concussion) also could miss the game, so Watson seems likely to get targets and snaps.

And the Cowboys have allowed the fourth-most DraftKings points to opposing tight ends with 15.1 per game, so the matchup is at least workable. The Cowboys are No. 25 in pass defense DVOA against the position. They are far from imposing.

But I try to live by a simple rule: I don’t roster tight ends who are almost 39 years old. I just don’t do it. Is that ageist of me? Probably. All the same, a man got to have a code.

I see why Watson is popping in the SportsGeek Model. He has a position-high 96% Bargain Rating on DraftKings, he has a good matchup and his target volume might increase.

But Watson feels too risky for cash games and too meek for tournaments.

Jared Cook, New Orleans Saints ($4,500 DK, $6,000 FD): Cook has 12.4 DraftKings points and six targets per game since returning from injury in Week 10. The Saints have a slate-high 28.5-point implied Vegas total, so Cook is an option in Saints stacks at the Coors Field of fantasy football. With quarterback Drew Brees, the Saints have a 64-46-2 record to the over at the Mercedes-Benz Superdome, good for an A-graded 14.2% return on investment (including postseason, per Bet Labs).

Jacob Hollister, Seattle Seahawks ($4,300 DK, $5,800 FD): Hollister is coming off the bye, and he seems likely to keep his full-time role, as tight end Ed Dickson (knee, IR) has suffered a setback. The Eagles are No. 7 in pass defense DVOA against tight ends, but in his three games this year with a snap rate of at least 50%, Hollister has averaged 15.0 DraftKings points, 39.7 yards and one touchdown on 7.3 targets and five receptions.

Greg Olsen, Carolina Panthers ($4,100 DK, $5,100 FD): Even without starting quarterback Cam Newton (foot, IR), the über-Witten continues to produce. Since the Week 7 bye, Olsen has averaged 5.8 targets, 4.5 receptions and 52 yards per game. Team-specific production patterns can be analyzed with our FantasyLabs Correlations Tool, and in their eight games together, Olsen and backup quarterback Kyle Allen have had a strong 0.79 correlation in their production. If Olsen has a big game, Allen could have one as well. For tournaments, use our Lineup Builder to stack Olsen with his quarterback.

Noah Fant, Denver Broncos ($3,900 DK, $5,100 FD): The rookie is starting to come on. In his three games since the team traded wide receiver Emmanuel Sanders, Fant has averaged a team-high 7.7 targets, and last week he even got two carries. The Bills have held tight ends to a league-low 6.5 DraftKings points per game, but with his recent volume, Fant has the potential for a big game.

Dallas Goedert, Philadelphia Eagles ($3,700 DK, $5,200 FD): A top-tier prospect who probably should have been a first-round pick, Goedert is starting to come into his own in his second season. Since Week 6, Goedert has averaged 11.5 DraftKings points on 5.6 targets per game with four fantasy TE1 finishes. If slot receiver Nelson Agholor (knee) is out, Goedert could see extra targets.

Cameron Brate, Tampa Bay Buccaneers ($3,600 DK, $5,400 FD): After starter O.J. Howard bobbled a target into a defender’s hands last week, he was unceremoniously benched, and Brate had a 10-73-0 receiving performance on 14 targets in his place. It’s uncertain if he Brate will keep the starting job. The Falcons are No. 21 in pass defense DVOA against tight ends.

Mike Gesicki, Miami Dolphins ($3,400 DK, $5,000 FD): Gesicki has averaged 5.3 targets since the Week 5 bye, and he could get more usage without wide receiver Preston Williams (knee, IR). The Browns are without safety Morgan Burnett (Achilles). In Week 9, they were humiliated with a 115-yard performance by the comparable Noah Fant.