There are five pitches priced above $9,000 today on FanDuel, all of whom are in the evening main slate: 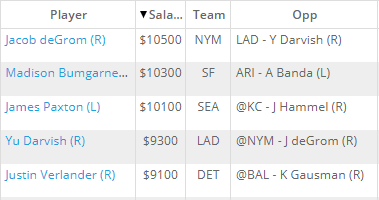 After three poor starts following a prolonged disabled list stint, Madison Bumgarner finally looked more like his old self last start, going for 46.0 FanDuel points against the Dodgers thanks to seven strikeouts across seven innings and no runs allowed. That was encouraging, but his recent Statcast is still weighed down by the prior two starts: Over his last three, he’s allowed a batted ball distance of 214 feet, an exit velocity of 92 miles per hour, a fly ball rate of 44 percent, and a hard hit rate of 37 percent. Despite those ugly marks, however, he is still currently the highest-rated pitcher in the Bales Model today because of several great data points.

First, he is at home at AT&T Park, which gives him a slate-high Park Factor of 95; Bum has historically dominated there, averaging 42.03 FanDuel points and a +6.11 Plus/Minus with a 63.8 percent Consistency Rating (per the MLB Trends tool):

Second, while he does have a tough matchup against a Diamondbacks squad that ranks seventh this season with a .329 team wOBA, Vegas bettors seem to believe in Bumgarner’s form last game. Arizona has a slate-low implied team total of just 3.5 runs, and Bumgarner is a sizable favorite with -175 moneyline odds. Finally, while Bumgarner’s 7.6 K Prediction is not the highest we’ve seen recently, it is currently only 0.1 strikeouts off the top mark of the day, which belongs to Mets righty Jacob deGrom. Bumgarner is pricey at DraftKings at $11,300, but he should be especially chalky on FanDuel, where his low $10,300 salary comes with a high 85 percent Bargain Rating.

Pro Subscribers can review ownership trends across tournaments of various buy-in levels after lineup lock via our DFS Ownership Dashboard.

Speaking of high FanDuel Bargain Ratings: Yu Darvish has a 94 percent mark there due to his low $9,300 price tag. He’s been way up and down lately; take a look just at his last two starts:

His recent Statcast data includes both games, and it’s surprisingly not that bad considering how awful he was against the Marlins, allowing two home runs and a whopping 10 earned runs across 3.2 innings. Over those two games, he’s allowed a batted ball distance of 215 feet, an exit velocity of 89 miles per hour, a fly ball rate of 39 percent, and a hard hit rate of 33 percent. Those are workable numbers, and his Vegas data suggests he should rebound: He’s only a moderate -123 favorite against the Mets because he’s up against deGrom, but he also has an opponent implied run total of just 3.6 runs. Like most pitchers in this slate, he has a middling K Prediction of 6.8, but his high past-year SO/9 rate of 10.404 shows the upside he has. He should be a popular pivot down from Bumgarner.

Eduardo Rodriguez is a left-handed pitcher facing the Chicago White Sox, which would have automatically disqualified him earlier in the season. From the beginning of the season up to the All-Star break, the White Sox owned the highest team wOBA against lefties, and LHP averaged an awful -3.0 DraftKings Plus/Minus and just 10.8 fantasy points per game:

That said, that trend has reversed since the All-Star break: The White Sox since that time have been the second-most generous team to opposing lefties, who have averaged 23.36 fantasy points and a robust +7.54 Plus/Minus on 75.0 percent Consistency:

The public seems to be catching up to this shift, however: The White Sox are currently implied for just 4.0 runs, and Rodriguez is a sizable -191 favorite. He also owns one of the highest K Predictions of the day at 7.5. Considering all of those factors, plus his low $6,900 DraftKings, he’s likely to be popular in guaranteed prize pools (GPPs).

Trevor Bauer is even cheaper at $6,300 on DraftKings, although he does have a more dangerous matchup against a Yankees squad that ranks fifth this season with a .333 team wOBA. He’s coming off a great outing in which he struck out six batters across eight innings pitched and allowed just one run. He has excellent recent Statcast data: Over his last two starts, he’s allowed a batted ball distance of 188 feet, an exit velocity of 90 miles per hour, a fly ball rate of 27 percent, and a hard hit rate of 24 percent. Given his form, he has a 4.3 opponent implied run total, which is a fairly solid mark on this slate. He definitely has strikeout upside, as evidenced by his past-year 9.341 SO/9 mark, and his 6.5 K Prediction is above average. But really this comes down to his price tag: He is worth some shots in GPPs at only $6,300 on DraftKings, where he has a high 90 percent Bargain Rating.

Jacob deGrom: He’s been great of late, posting a high +12.83 FanDuel Plus/Minus with a 70 percent Consistency Rating over his last nine starts. And he has upside today: His 7.7 K Prediction tops all pitchers. That said, he’s a dog against Darvish and the highest-priced pitcher at $12,700 and $10,500 on DraftKings and FanDuel.

James Paxton: He’s way overpriced on DraftKings at $12,200, but it is hard to argue he doesn’t deserve it. He’s gone for at least 27 DraftKings points in each of his last five starts and hasn’t dipped below seven strikeouts during that span. He has fine Vegas data, but his low 5.5 K Prediction against the Royals rates him low in most of our Models.

With our Lineup Builder, it’s easy to incorporate stacks into DFS rosters. The highest-rated DraftKings stack (per the player ratings in the Bales Model) currently belongs to the Houston Astros (even though the Rockies and Phillies play at Coors Field today):

Considering the opponent, this makes sense: The Astros face Toronto righty Cesar Valdez, who has an atrocious 2.045 HR/9 allowed mark over the past year. His 1.667 WHIP isn’t any better, and in his last outing against an Angels offense that isn’t as good as this Houston offense, he allowed six earned runs across just 2.0 innings pitched. Over his last three games, he’s allowed a batted ball distance of 221 feet, an exit velocity of 92 miles per hour, and a hard hit rate of 45 percent. That is a death sentence against the most powerful offense in the league, who own easily the highest team wOBA of .359 this season.

That said, there’s some peculiar line movement happening. Even though the Astros are getting 85 percent of the moneyline bets, their implied run total has dipped a whopping 0.4 runs. Monitor this situation throughout the day.

We’ve recently added tools for FantasyDraft in Models, and I have a piece on FantasyDraft scoring, rosters, and strategy. FantasyDraft allows six batters in a stack, so let’s take a look at a highly-rated group for today’s main slate:

I couldn’t go a whole Coors Field slate without talking about the Rockies, who are in a particularly great spot tonight. Being at home affords them their typical perfect 100 Park Factor, and they are currently implied for a slate-high 6.4 runs — 1.2 more than any other team. But what makes them stand out is their matchup against Phillies righty Vincent Velasquez, who has a slate-high 2.211 past-year HR/9 mark. Prior to last game, he had allowed at least one home run in each of his last five starts. Charlie Blackmon is the highest-rated batter in the Bales Model, and he’s on the positive side of his splits against Velasquez; he owns a massive .430 wOBA and .332 ISO over the past year. Teammate Nolan Arenado has been hot lately, too, as evidenced by his 234-foot batted ball distance and 93 MPH exit velocity over his last 12 games. The Rockies should be highly owned and for good reason.

In the early slate, it will be imperative to find some lower-owned batters since there are only two games. To do that, you’ll likely have to dip down in the batting order. One player who stands out is Washington catcher Matt Wieters, who is hitting seventh today. He’s on the wrong side of his batting splits against righty Kyle Hendricks, and he’s been disappointing of late:

That said, his slate-high +77 Recent Batted Ball Luck suggests he’s been unlucky, and his recent Statcast data is solid. Over his last eight games, he’s posted a batted ball distance of 237 feet and an exit velocity of 92 miles per hour. He could be a forgotten piece in today’s early slate.

Mike Trout continues to do Trouty things: He’s scored single-digit fantasy points just four times over his last 15 games. He’s averaging a nice 14.8 FanDuel points per game over the past month and has excellent recent Statcast data as well. Over the last 15 days, he’s averaged a batted ball distance of 236 feet, an exit velocity of 92 miles per hour, and a hard hit rate of 45 percent. He’s a no-splits batter and crushes everyone: Over the last year, he has an unreal .453 wOBA and .334 ISO mark against right-handed pitchers. It seems silly to write up Trout, who has been the best player in baseball for a while now, but in Coors Field slates it is always important to remember that a contrarian stud like him can go off anytime.