Thursday offers a split slate: The early portion begins at 12:35 pm ET and includes four games on DraftKings and three games on FanDuel — the Padres-Diamondbacks game is not in the latter. The eight-game main slate starts at 7:05 pm ET. Let’s jump in.

The same five pitchers cost more than $9,000 on DraftKings and FanDuel. Johnny Cueto and Michael Fulmer qualify for the early slate, and Lance McCullers, Jon Lester, and David Price are in the main slate. 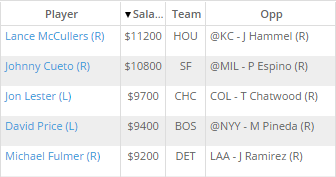 McCullers presently possesses the highest K Prediction, moneyline odds, and salary. The Royals are currently implied to score 3.8 runs (per the Vegas Dashboard) — the lowest mark of any team today — and rank in the bottom-four in wOBA and ISO this season. Similarly-priced pitchers have averaged 20.76 DraftKings points against the Royals, roughly 1.5 more points than McCullers’ salary-implied point total. Speaking of salary: McCullers costs more than $11,000 on DraftKings for the second time ever in our database.

McCullers may offer the best recent Statcast data in either slate, as he’s limited hitters to a recent batted ball distance of 183 feet, a ground ball rate of 67 percent, and an exit velocity of 87 miles per hour. There haven’t been many pitchers historically with similar Statcast data, moneyline odds and percentage of bets, and opponent implied runs, but the group has averaged 41.43 FanDuel points on 9.2 percent ownership (per our Trends tool).

Since the Astros are the largest favorite today and the pitching slate isn’t filled with extraordinary options, McCullers may be one of the highest-owned players on either site. He recorded a season-high 10 strikeouts against the Royals back in April, and he leads all pitchers on the slate with 39.2 FanDuel points per game over the last month. Three of his four-highest guaranteed prize pool (GPP) ownership marks have occurred during his last three starts — including a slate in which he held higher ownership than Clayton Kershaw:

Over the previous three seasons, Price has averaged a -10.62 FanDuel Plus/Minus against the Yankees, and in five starts against them last year, he yielded 26 runs in 29.2 innings and averaged a 5.2 SO/9 mark. This current group of Yankees has the second-best SO/AB (0.291) for pitchers and the second-worst wOBA (0.329), which highlights the boom-or-bust nature of the matchup.

Working in Price’s favor is umpire Victor Carapazza, who’s one of the most beneficial umpires for left-handed pitchers. Southpaws have averaged the seventh-highest FanDuel Plus/Minus and fourth-best Consistency Rating when Carapazza has been behind the plate since 2015:

The Yankees rank third in the league with a 39.8 percent fly ball rate against left-handed pitchers, and the top-four hitters in their projected lineup have averaged recent batted ball distance differentials between +24 and +30 feet. That said, Price’s 8.47 SO/9 is the fifth-best mark in the main slate, and he could easily go overlooked in GPPs.

Cueto, who has historically struggled when his DraftKings Recent Batted Ball Luck score has been worse than -50, leads the early slate in K Prediction and salary, and he’s managed at least six strikeouts in seven straight starts. Fulmer faces an Angels squad that ranks in the bottom-three in road wOBA and ISO this season, and home pitchers with similar moneyline odds have averaged a +9.69 FanDuel Plus/Minus against the Angels. Fulmer has pitched at least seven innings in six straight, including a 49.0-point FanDuel performance against the Angels last month.

Fulmer leads all pitchers with six Pro Trends on both sites, and his Statcast data is miles better than Cueto’s. However, the Angels’ projected lineup has a low 0.202 SO/AB rate; because the early-slate offenses offer higher upside than the pitchers, spending down may be the more popular route, which could leave Cueto and Fulmer underowned.

Michael Pineda is one of three pitchers facing a team presently implied to score less than 4.0 runs, and the Red Sox’s implied total has decreased by 0.3 runs since the line opened. Pineda currently has the third-highest K Prediction in the main slate, and despite allowing 10 hits in his most recent start, he has reduced his hard hit rate by 15 percent and his batted ball distance allowed by 16 feet over his last two outings. He is $600 cheaper on FanDuel, where he’s one of two pitchers with a Consistency Rating of 80 percent over the past month.

Tyler Chatwood has averaged 20.36 DraftKings points per game in road starts since the start of 2016. Over his last three starts, which includes a Coors Field outing, Chatwood has limited hitters to an 182-foot batted ball distance, an 87-MPH exit velocity, and a 61 percent ground ball rate. He’s also recorded a 2.46-second batted ball air time — the second-best mark among all pitchers — which could come in handy, as the wind is projected to blow out to left-center field at Wrigley. The over/under has yet to be set for the Rockies-Cubs affair, although it should be high given the wind. Chatwood will likely be low-owned.

Derek Holland: He has the second-highest K Prediction in the main slate, and he costs $6,600 on DraftKings. His recent Statcast data isn’t great, but his last two starts came against the team with the best ISO mark against left-handed pitchers in the Tigers. The Rays have been much less formidable against lefties, leading the league with a 27.7 percent strikeout rate.

Patrick Corbin: He has the worst WHIP and second-best SO/9 mark in the early slate, and he faces a Padres team that ranks in the bottom-three in wOBA and ISO against left-handed pitchers this season. In two starts against the Padres in April, Corbin recorded 17 combined strikeouts and 20.50 and 27.75 DraftKings points. He also leads the early-slate pitchers with an opponent SO/AB of 0.287, and he leads all pitchers with an opponent wOBA of 0.257.

With our Lineup Builder, it’s easy to incorporate stacks into DFS rosters. The top-rated four-man FanDuel stack in the CSURAM88 Model for the early slate belongs to the Cardinals — a team that leads the slate with an implied run total of 4.8, a Team Value Rating of 80, and an opponent recent wOBA of 0.461:

All four hitters provide Bargain Ratings of at least 63 percent, and after a 13-game homerless stretch, Matt Carpenter went yard last night. Reds righty Scott Feldman has limited hitters to a 202-foot recent batted ball distance and a 14 percent fly ball rate, but his pitch velocity has decreased 1.2 miles per hour and his Statcast differentials have favored the hitters. Additionally, he’s allowed eight stolen bases through 12 starts, and Dexter Fowler has recorded two of his three steals this season over the past week.

The top-rated five-man DraftKings stack in the Bales Model for the main slate belongs to the Astros, who lead all teams with 5.4 implied runs:

This is the fifth-most expensive stack on the slate, and it’s comprised of five hitters with a positive recent batted ball distance differential. Royals righty Jason Hammel has surrendered nine homers in his last seven starts and has allowed a 48 percent fly ball rate over the last two. If the Astros are able to shorten Hammel’s outing, they’ll be able to take advantage of a slate-best Opponent Bullpen Rating of 96. The Royals’ pen has the sixth-highest WHIP (1.44) and BB/9 (4.05).

The Tigers rank in the top-five in home wOBA and ISO, and six of the top-15 hitters in projected and confirmed lineups for recent batted ball distance in the early slate are Tigers. Angels righty J.C. Ramirez has yielded multiple home runs in three of his last five starts, including a home start against the Tigers in which he was tagged for five runs and two homers. Ian Kinsler leads all projected second basemen in recent batted ball distance by at least 70 feet, and he’ll likely accrue high ownership in the early slate. For more on the Tigers, you can read Matt LaMarca’s MLB Pro Model Stacks piece.

Pirates righty Gerrit Cole has allowed eight home runs in his last three starts, he has the worst recent wOBA and ISO in the main slate, and he’s allowed nine stolen bases this season. The Marlins are implied to score only 4.0 runs, which will likely reduce their overall ownership, but this may be a spot for a GPP stack centered around Giancarlo Stanton‘s power and Dee Gordon‘s speed. The top-five hitters in the projected batting order all have FanDuel Bargain Ratings of at least 70 percent, and Gordon ranks second on the slate with a 0.385 SB/AB mark over the last year.

The six most-expensive second basemen in the main slate all have DraftKings Bargain Ratings less than 10 percent. Brian Dozier ($3,900) is not included among that group, and he offers a potential deviation from the high-priced studs and the low-priced punts. Dozier ranks first at his position with a recent batted ball distance of 239 feet and second with a 0.262 ISO. Mariners pitcher Christian Bergman has a slate-worst 2.626 HR/9 and 5.491 SO rate, and yet the Twins are presently implied to score 4.3 runs — one of the lowest marks in the main slate.

Good luck, and be sure to do your own research with the Labs Tools!