There are five pitchers today priced above $9,000 on FanDuel, headlined by two of the best in the league in Corey Kluber and Max Scherzer: 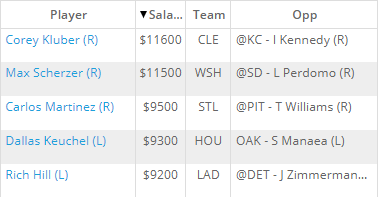 To say Kluber has been dominant lately is an understatement:

Over his last 10 games, he’s averaged a silly +20.0 FanDuel Plus/Minus with a 90 percent Consistency Rating. He’s posted at least eight strikeouts in each of his last 14 starts; he hasn’t been below 36.0 FanDuel points during that time frame. If you’ve done nothing else but roster Kluber on the slates he’s in, you’ve had a good shot of being a profitable player. He’s in another good spot today: He’s facing a Royals team that ranks 23rd in the league with a .313 team wOBA and is currently implied for 3.3 runs. He’s a large -204 favorite, and pitchers with similar Vegas data have historically exceeded salary-based expectations 62.9 percent of the time. The Royals don’t strike out a ton — their 19.9 percent strikeout rate this season ranks 23rd in the league — but Kluber still has a high 8.3 K Prediction because he’s Corey Kluber.

Kluber has been chalk for a while: Over his last eight starts he’s averaged 42.3 percent ownership in mid-sized FanDuel guaranteed prize pools (GPPs). Since you can roster only one pitcher on FanDuel, that is a massive number (per the MLB Trends tool):

And he’s not going to be low-owned tonight. However, it’s not as if this slate is barren with pitching options: Both Scherzer and Dallas Keuchel would likely be chalky in different slates, but, alas, all of them are together in this 14-game main slate. And Scherzer is in an all-time spot, which throws another wrench into this situation.

He’s facing the San Diego Padres, who rank 29th this season with a .301 team wOBA and second with a 25.3 percent strikeout rate. That combination is a DFS pitcher’s dream: They’ve been easily the most pitcher-friendly squad in the league this season:

Scherzer’s Vegas data confirms the matchup: The Padres are currently implied for a slate-low 2.9 runs, and Scherzer is a big -205 moneyline favorite. He gets them in San Diego, which also gives him a high 82 Park Factor. And although Scherzer can strike out anyone, the Padres are easily struck out, so he has a high 11.0 K Prediction that almost breaks our Models. That’s a rare mark, and we can go back to the Trends tool to see just how rare it is. Our Trends database for FanDuel goes back to 2012, which gives us a sample of 27,563 starting pitchers. Of those, only 806 (2.92 percent) have had a K Prediction of 8.0 or higher. Only 32 (0.12 percent) have had a double-digit K Prediction. The number of pitchers to hit 11.0 (the highest mark in the database)? Only four. Even the guys who have hit ‘only’ a 10.0 K Prediction have historically crushed value:

Scherzer himself has had a double-digit K Prediction five times. He missed value twice, but that Plus/Minus is telling of his upside today:

So Scherzer or Kluber? That is the question today for daily fantasy baseball.

Pro subscribers can review ownership trends across GPPs of various buy-in levels after lineups lock via our DFS Ownership Dashboard.

Matt Moore is not an exciting pitcher to roster, but he has exceeded salary-based expectations in seven of his last 10 games on DraftKings. He’s also only $5,000, so he allows DFS players to roster Kluber or Scherzer and some stacks with upside. Moore has a nice matchup against the Phillies, who rank 27th this season with a .306 team wOBA and are currently implied for just 3.6 runs — the fourth-lowest mark of the night. Of the five guys with the best Vegas data, Moore’s batter-level salary stands out:

Further, he has positive splits at home in San Francisco, where he comes with a slate-high Park Factor of 93. He does have concerning recent Statcast data — over his last two starts, he’s allowed a batted ball distance of 227 feet and an exit velocity of 92 miles per hour — but, again, he’s $5,000. He needs to do little to pay off his salary, and if he’s able to keep up his recent strikeout rate — he struck out 16 batters in his last two starts — he’ll be a valuable player tonight.

After lineup lock Pro subscribers can see how other DFS players chose to use Moore, Scherzer, Kluber, and the other main slate pitchers by consulting our new DFS Contests Dashboard.

Zack Godley does not have great Vegas data: He’s facing a Twins team currently implied for a whopping 4.7 runs, and he’s only a small favorite with -110 moneyline odds. That said, he’s been fantastic of late, posting a +6.06 DraftKings Plus/Minus with an 80 percent Consistency Rating over his last 10 games. And it’s not as if he’s been feasting against poor competition; he’s been excellent against a murderer’s row of offenses since mid-June:

Thus, the line here is a bit odd. It’s not as if he has bad recent Statcast data; in fact, it’s solid: Over his last two starts, he’s allowed a batted ball distance of 199 feet, an exit velocity of 90 miles per hour, a fly ball rate of 34 percent, and a hard hit rate of 22 percent. He’s in a pitcher’s park in Minnesota, and his 7.1 K Prediction is the fourth-highest mark of the day. He’s priced at $8,400 on DraftKings and is worth exposure in GPPs. He’s projected for only five to eight percent ownership there likely because of his poor Vegas marks.

Dallas Keuchel: He has a nice matchup against an Athletics team that ranks 20th with a .317 team wOBA and is implied for only 3.5 runs. His 7.2 K Prediction is much lower than Scherzer and Kluber’s marks, but he’ll also have lower ownership. He’s an intriguing high-end pivot in tournaments.

With our Lineup Builder, it’s easy to incorporate stacks into DFS rosters. The highest-rated DraftKings stack (per the player ratings in the Bales Model) in the early slate currently belongs to the Colorado Rockies:

And we have yet another wrench thrown in the slate: Not only do we have expensive pitching studs in historically great matchups, but we also have the Colorado Rockies at home in Coors Field. They’re currently implied for 6.8 runs, and they’re only two days removed from exploding for 17 runs. They face Brewers righty Matt Garza, who has allowed five home runs and 11 earned runs over his last two starts; he’s allowed a high 235-foot batted ball distance during that time frame. That’s dangerous at Coors Field, and guys like Charlie Blackmon should be able to take advantage. Over his last 13 games, Blackmon has averaged a 230-foot batted ball distance, 91 MPH exit velocity, and 42 percent hard hit rate. He’s on the right side of his splits today with a .419 wOBA against righties.

We’ve recently added tools for FantasyDraft in Models, and I have a piece on FantasyDraft scoring, rosters, and strategy. FantasyDraft allows six batters in a stack, so let’s take a look at a top group for today’s main slate:

The Dodgers continue to destroy the league: They’re 85-34, and fivethirtyeight.com has their simulated season currently at 113-49. They should continueto dominate tonight against Detroit pitcher Jordan Zimmermann, who has an awful 1.570 WHIP over the past year. His recent form isn’t any better: Over his last two starts, he’s allowed a batted ball distance of 211 feet, an exit velocity of 92 miles per hour, and a fly ball rate of 43 percent. Good luck with that against these guys:

This slate is loaded. We haven’t even discussed the Rangers yet, and they’re currently implied for a slate-high 6.9 runs — yes, even more than the Rockies at home. The Rangers are up against White Sox righty James Shields, who is #notgood, as evidenced by his 1.615 past-year WHIP and slate-worst 2.5 HR/9 mark. He’s been especially bad lately, allowing a batted ball distance of 223 feet and an exit velocity of 94 miles per hour over his last two starts. Joey Gallo should be popular in this spot, considering he’s one of the hottest hitters in baseball: Over his last 12 games, he’s averaged a batted ball distance of 260 feet, an exit velocity of 100 miles per hour, a fly ball rate of 44 percent, and a hard hit rate of 59 percent. Things could get ugly in Texas, where it’s projected to be 89 degrees at first pitch.

Opposing batters at Coors Field are always a little lower-owned than the Rockies, so take a look at Brewers lefty Eric Thames. He’s on the right side of his splits against a righty, owning a .385 wOBA and .274 ISO over the past year. He has solid Statcast data as well: Over his last 10 games, he’s averaged a batted ball distance of 229 feet and an exit velocity of 93 miles per hour. He’s projected for just five to eight percent ownership on DraftKings and FanDuel, and he’s projected to bat second for a team implied for 5.3 runs. It’s that kind of slate tonight.