What Makes an NBA Champion, and Why the Cavs Are in Trouble

You’ve probably heard all of the many adages about NBA championships by now. Superstars win championships. Rotations shorten in the playoffs. These tropes exist for a reason: On some level, they’re true. But just how true? Let’s dive into the data to find out the ideal construction of an NBA championship team, in terms of superstar play and depth.

What Makes a Champion?

To study this, I went back to the 1983-84 season, which was the first year it required the champion to win 15 games. In the 2002-03 season, all rounds became seven-game series, which means the champion was required to win 16 games. I eliminated the lockout-shortened season of 1998-99, and I correlated each playoff team’s total playoff wins with each player’s skill level, based on season-long Value Over Replacement Player (VORP). In a sense, this will tell us how important a player is to winning a championship. Are titles most correlated with a team’s best player? Or the third-best player? Or perhaps it’s the ninth-best player, which would signify depth is underrated in the playoffs.

As the chart above shows, after the sixth player, the correlation significantly drops. Each team’s second-best player had the strongest correlation, which suggests that having a “Big 2” is perhaps the most important thing a team can have (hello, Chris Paul and the Rockets’ 2017 offseason). Still, the top-six players all had fairly strong correlation values. We can go deeper, though. In the next graph, I correlated playoff wins versus each team’s average VORP for their top x players. For example, the second bar shows the average VORP for each team’s top-two players. The final bar shows the average VORP for each team’s top-10 players. What we’re looking for is when the curve evens out.

This shows that about after the fifth player, there is diminishing return. Put a different way: You can mostly explain a team’s playoff production with their starters (or five best players, which isn’t always the same thing). Looking at the prowess of the eighth man is fine, but it does little to increase the prediction.

Which Teams Are Set up for Playoff Success This Season?

This confirms the conventional wisdoms we touched on at the top about the playoff rotations shortening and top talent mattering. So what does that mean for this year’s championship-hopeful teams? To look at this, I compiled each team’s overall net rating (offensive rating minus defensive rating), along with the net ratings for their starters and bench. Given the data above, teams that have been buoyed by incredible bench performances and that have a low starter net rating could be in trouble when the playoffs roll around.

Let’s dive into some specific teams that stand out in this regard.

LeBron James certainly deserves the benefit of the doubt considering he’s made seven straight Finals. Still, this seems like the year in which the Cavs could finally be in trouble. With all of those Finals teams, LeBron’s squads have historically had a great starters net rating (see chart below); this year, their +0.0 mark ranks 15th overall. Their total net rating of +2.5 is better (seventh overall), but without Kyrie Irving on the roster, they’ve been propped up by the fourth-best bench in the league (+6.2)

Of course, the perhaps the biggest question of the NBA season is what version of Isaiah Thomas will the Cavs get? Last season he was one of the most efficient offensive players in the entire league, posting a +5.72 Offensive Real Plus-Minus (RPM) — the sixth-highest mark in the league behind Stephen Curry, Russell Westbrook, LBJ, James Harden, and Kawhi Leonard. Isaiah, when healthy is a legitimate offensive stud, and his total RPM was right in line with Kyrie’s mark last year. It’s unclear whether Thomas will be his 2016-17 self again, which is a scary proposition for the Cavs, because, boy, do they ever need him. They see a large dip on offense without LeBron on the floor:

That 110.5 number would still rank fourth overall this season (the 118.6 mark would be historically amazing), but it’s clear the Cavs are hurting for shot creators. Without LBJ or Dwyane Wade on the floor this season, they’ve posted an Offensive Rating of just 101.6, which would rank 27th in the league. Again, LBJ should always get the benefit of the doubt, and I don’t like spouting hot takes, but I’ll just say what I believe: Without Isaiah returning to form, the Cavs are at the highest risk they’ve ever been in of missing the Finals.

The Raptors’ bench is very good this season, ranking third in the league with a +6.6 net rating. Their starters are largely the same, with Kyle Lowry and DeMar DeRozan running the offense for what seems like the millionth year in a row. For those reasons, they’re likely being underappreciated in terms of odds to actually make the NBA Finals (they’re +750 right now). Sure, they’re deep, but that doesn’t mean their top players, especially with new young guys like OG Anunoby, can’t hold their own: The Raptors’ +8.1 starters net rating this season ranks third in the league. The Celtics have actually been a bit hampered by their bench, which ranks “only” ninth with a +1.7 net rating. Their starters, on the other hand, have been awesome (+6.8 net rating). That unit has been mixed up a bit this season, but their most frequently played lineup — Kyrie-Jaylen Brown–Jayson Tatum–Al Horford–Aron Baynes — which has gotten 199 minutes of run, has a net rating of +17.1. Substitute Marcus Smart in for Baynes, and it hasn’t been as great — they’ve had a net rating of +0.1 in 135 minutes — but there are positive signs here, and it’s not inconceivable that Gordon Hayward could return for an end-of-the-year playoff push.

The Wolves have one of the worst bench net ratings in the league at -5.0, but that likely oversells how much their bench has been hurting them, considering how much Tom Thibodeau runs a playoff rotation throughout the regular season. Here’s a good perspective: The Celtics’ most-used lineup, stated above, has played together 199 minutes. The league’s second most-used lineup — an Oklahoma City combination of Russell Westbrook–Andre Roberson–Paul George–Carmelo Anthony–Steven Adams — has played 440 minutes. The most-used lineup? Of course it’s the Wolves’ starting crew of Jeff Teague–Andrew Wiggins–Jimmy Butler–Taj Gibson–Karl Towns. That lineup has played 712 minutes. SEVEN HUNDRED AND TWELVE MINUTES. Of the league’s most-used four-man lineups, Minnesota owns the top-five in minutes played, per NBA Stats: 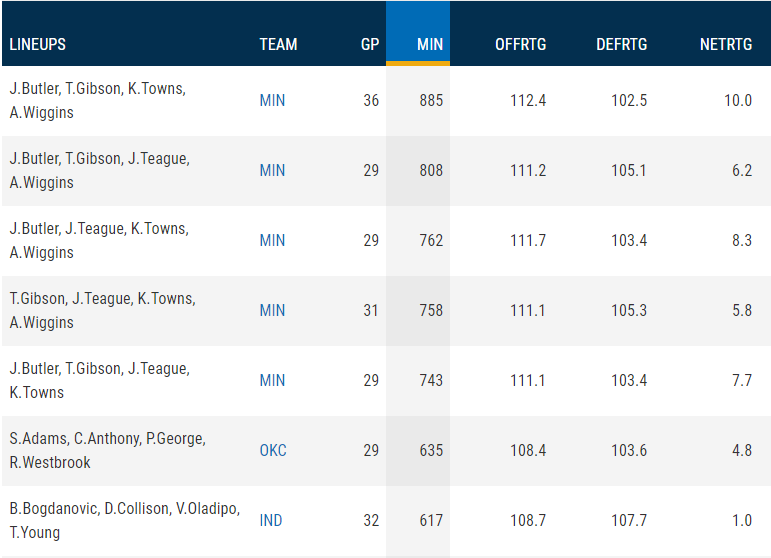 The Wolves are a good team: They own the fourth-best starters net rating and the sixth-best overall net rating. They’ll likely make the playoffs, and if they do, their bench struggles shouldn’t be too much of a concern.

The Bucks currently sit fourth in the East, but it feels like there’s a big gap between them and the top-three (Celtics, Raptors, and Cavs). Even so, they’re perhaps a bit undervalued: While they have an overall net rating of just +0.7, their +3.5 starters net rating is much better. They’ve been tanked by their awful bench, which has a -4.9 net rating, although that will be less of an issue during the playoffs. A look at their top lineups is even more encouraging. Their most-played lineup — Eric Bledsoe–Tony Snell–Khris Middleton–Giannis Antetokounmpo–John Henson — has blitzed opponents, averaging a +11.6 net rating across 258 minutes this season. They’ve scored at a rate of 114.3 points per 100 possessions in those minutes, which would be over a full point/100 better than Houston’s league-high mark this season. Their second-most used lineup, which substitutes Malcolm Brogdon for Bledsoe, has posted a +14.0 net rating. In the rare minutes they play Brogdon and Bledsoe together with Giannis, Middleton, and Henson, they’re the best version of themselves, posting a +16.8 net rating. You can expect to see this combination play more minutes as the season progresses. (Well, maybe not with Jason Kidd.)

They’re good. Their starters are good. Their bench is good. They have superstars at multiple positions. They’ll be dominant once Stephen Curry and James Harden are back and fully healthy. Ho hum.

The Cavaliers are currently the favorites to win the Eastern Conference at -140. The best values are probably the Raptors, Wizards, or Bucks, who are currently +750, +1800, and +2000 to win the East, respectively. Boston stands at just +225; it might be more profitable to just bet them game-by-game in the playoffs instead, especially versus the Cavs. They hovered around +160 to +170 in their first meeting of the year, and it’s certainly possible the public would hammer the Cavs if they met in the Eastern Conference Finals. Photo via David Richard-USA TODAY Sports

Handicapping the Motivation for All 30 NBA Teams

Are Elite Shot Creators Undervalued by the Betting Market?