About a year ago, I introduced the Vegas Bargain Rating (VBR) metric to identify discrepancies between DraftKings PGA salaries and odds to win a tournament. Such a metric is valuable because DraftKings weights player odds so heavily in its pricing. Take a look at the correlation between salaries and odds for the St. Jude Classic: 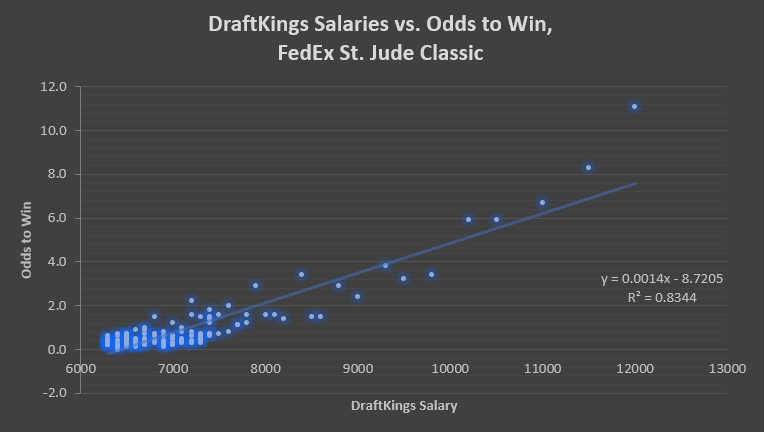 The r-squared value of 0.83 is high and suggests that DraftKings prices players largely by their odds to win. That’s useful information because it’s not a perfect 1.0 correlation. There are outliers, and identifying those can help us find value in our quest to roster the winner of the tournament. And that’s useful because daily fantasy golf guaranteed prize pools (GPPs) are massive these days. If you want to take down a top-heavy GPP, you almost always have to roster the tournament’s winner. The VBR metric can help you find golfers who are cheap relative to their odds of winning.

To calculate VBR, I find a line of best fit (shown above), ‘predict’ what a player’s salary would be if there were perfect correlation, calculate the difference between predicted salary and real salary, and then reset everything to an easy-to-understand 0-to-100 scale.

And, of course, we can do the same exercise for golfers on FanDuel, where the r-squared value is lower than on DraftKings, but FanDuel VBR is still useful: 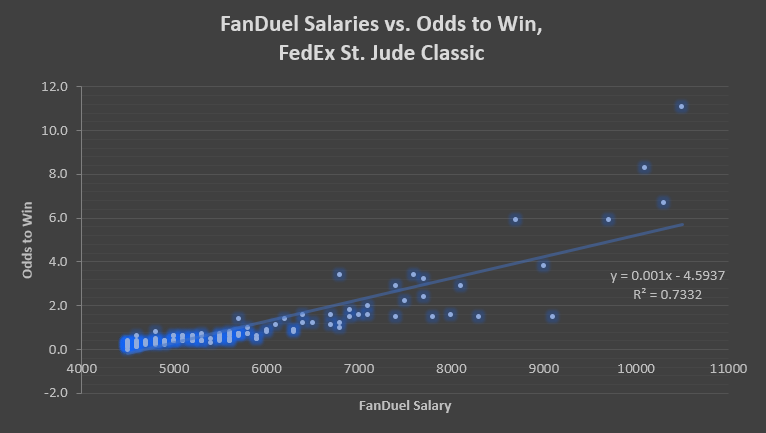 Without further ado, here are the Memorial VBRs for both DraftKings and FanDuel:

Last week, Jason Dufner, who had pitiful VBRs of 1.92 and 8.60 on DraftKings and FanDuel — some of the lowest marks among all golfers — won the tournament. So much for VBR, right?

I don’t think Dufner’s win was an indictment on VBR at all. What we’re trying to do here is create a process of optimization — how to spot mispriced players and create a lineup that has the best odds of taking down a GPP. While Dufner did not have a high probability of winning the Memorial Tournament — he had implied Vegas odds of just 1.5 percent — his odds were not zero. Was he a VBR ‘bargain’ at $8,700 and $8,200? Almost certainly not — but sometimes outliers happen. Black Swans occasionally win golf tournaments.

I’m being hyperbolic; Dufner was not an egregious play by any means, and his VBR didn’t suggest he was. As mentioned last week, there are a variety of factors that go into winning guaranteed prize pools (GPPs). Your best chance to roster the winner of the Memorial Tournament was to lock Dustin Johnson and either Jon Rahm or Jordan Spieth into your lineup and then to find four cheap guys — but this is golf: Even a golfer with an outrageously high probability of winning has a relatively small chance of winning. Last week DJ led the field with only 14.3 percent odds to win. Predicting golf is hard.

But, again, the point is process optimization. Last week, DJ got cut and did not win the tournament. But if this tournament were played a million times, would DJ win the most times? Probably, yes. Stay true to that mindset: Here at FantasyLabs, we believe in the long game.

No one in this field is a DJ-level favorite, but since VBR compares pricing versus odds in a singular field, the top guys dominate yet again this week. Rickie Fowler has 11.1 percent odds to win the tournament and costs the exact same ($12,000 on DraftKings) as DJ did last week. Still, he leads all golfers with a 100 VBR on both sites. Brooks Koepka is next with 56.61 and 70.73 VBRs. Intriguingly, a guy in the $7,000 range, Danny Lee, is third with a 54.96 DraftKings VBR.

It is not common for a golfer in the $7,000s to have a top-three VBR, but Lee is a notable option this week, as his 70.0 Long-Term Adjusted Round Score is lower than usual for a guy with 2.2 percent odds to win the tournament. There are likely two reasons he’s a bit underpriced. First, he’s in stellar recent form, as evidenced by his 69.5 Recent Adj Rd Score and +9.09 Plus/Minus over his last nine outings:

Second, several golfers have withdrawn from the St. Jude Classic because of their recent qualification for the U.S. Open; examples include Keegan Bradley, Jamie Lovemark, and Steve Stricker. Vegas odds are zero-sum; if players withdraw, their win probability has to go somewhere. And since the alternates replacing them are naturally weaker than the rest of the field, most of the additional odds go to the better golfers. Sure, the withdrawals help Fowler, Koepka, and guys like that — but they also help golfers in the mid-tier range, especially those with great recent data.

You likely don’t need to have a different roster construction because of Lee’s value — stars-and-scrubs lineups are still optimal — but perhaps you can be a little more balanced than usual this week and still maximize your odds of finding the winner of the tournament.

Good luck this week, and keep an eye out for Part 1 of my VBR piece for the U.S. Open, which I’ll release soon and then update next week as we see line movement.

Be sure to watch our PGA podcast and model preview on our Premium Content Portal and use our suite of Tools to research all of the golfers.