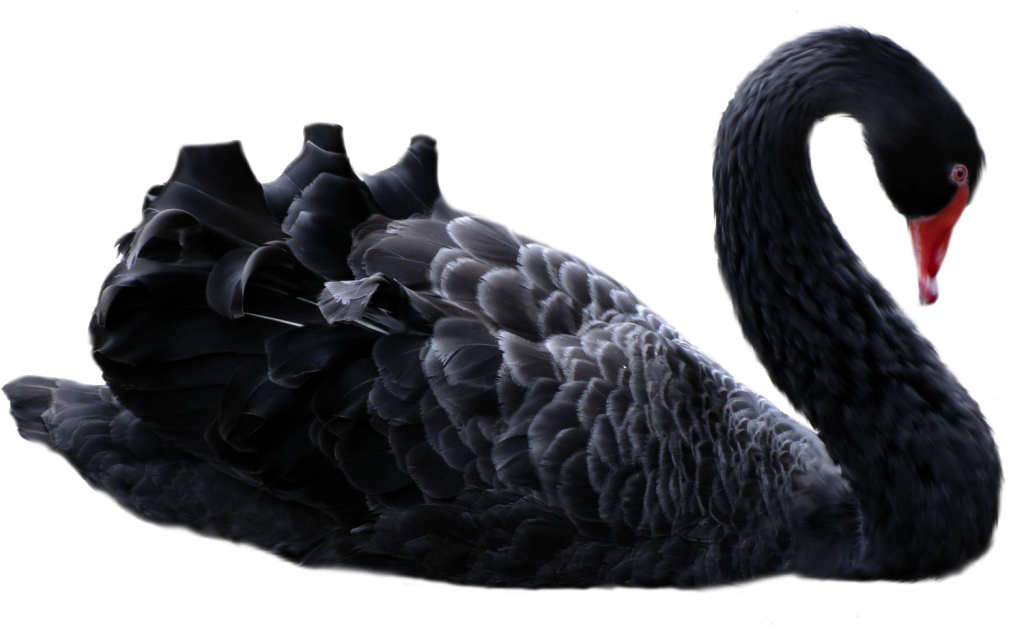 A lot of our readers are really sophisticated, so I trust that you know about The Black Swan — the movie that the women in our lives made us see (twice) over five years ago. Oops, that was just Black Swan, without the article. The Black Swan is Nassim Nicholas Taleb’s 2007 treatise on improbable yet impactful events and the way that we think about them. Taleb’s book has a lot of subtlety, but it (perhaps) can be distilled to a single idea: to achieve massive success, it’s necessary (but not sufficient) for one to position oneself strategically in order to benefit from the occurrence of improbable events, be they positive or negative — especially negative. Almost everyone makes money when the stock market goes up. Almost no one profits when the stock market crashes — except for the visionary.

This is the 13th installment of The Labyrinthian, a series dedicated to exploring random fields of knowledge in order to give unordinary theoretical, philosophical, strategic, and/or often rambling guidance on daily fantasy sports. Consult the introductory piece to the series for further explanation.

William Shakespeare was never likely to become the voice of English literature. Unlike many of the other playwrights who were his peers, he didn’t come from privilege. He hailed from a small town of little consequence and had not been afforded an education at Oxford or Cambridge. To borrow from his contemporary, the great Ben Jonson, the country-raised Shakespeare “hadst small Latine, and lesse Greeke,” which in the Renaissance was a nice way of saying that Shakespeare was sort of at a seventh-grade reading level.

In fact, when Shakespeare started out in London in the late 1580s, he wasn’t liked by some (or perhaps most) of the established playwrights. One of them, Robert Greene, even took to print so that he could berate Shakespeare publicly as “an upstart crow, beautified with our feathers.” Most of the stupid “Shakespeare wasn’t Shakespeare” conspiracy theories that exist even to this day can be linked to the fact that, as a person, Shakespeare was highly unlikely to become — he didn’t seem like the kind of individual who could become — “Shakespeare.”

Likewise, in John Milton’s 17th-century epic Paradise Lost (his interpretation of the Garden of Eden story from Genesis), Lucifer (afterward Satan) is never what he seems to be. As one of the highest-ranking and most-loved angels in Milton’s vision of Heaven, Lucifer doesn’t seem like the kind of creature who would ever rebel against God. And after his expulsion from Heaven and escape from Hell, Satan takes the form of a cherub on his journey to earth, not seeming like a threat to Uriel, the angel meant to keep evil away from humans. And then, once on Earth, Satan, in the guise of an exotic and nearly hypnotic dragon-esque serpent, doesn’t strike Eve as the type of creature who would tell her a lie and lead her (and the rest of humanity) to death.

In general, for good or ill, what we don’t expect to happen actually happens far more than we think it will. Reality doesn’t enter your house through the front door wearing a tux. Rather, it enters through a loose window wearing a mask. Prophets are almost never whom we think they are.

The unexpected becoming reality is a major theme of Taleb’s book, who as a former Wall Street trader is not the prophet one would anticipate to be the author of a philosophical text. Indeed, Taleb himself is something of a Black Swan, which he defines as an event that is rare, extremely impactful, and often not predicted in advance. Actually, “many Black Swans can be caused and exacerbated by their being unexpected.”

And, as illustrated by the examples of Shakespeare and Milton’s Satan, a Black Swan can be either beneficial or deleterious to society.

Of course the question arises, “Positive and negative for whom?”

The Swan Hunter: Two in the Bush is Better than One in the Bag

Many ways exist to win a guaranteed prize pool, but I think that the surest way of maximizing one’s chances of winning one is to hunt the NBA DFS equivalent of Black Swans, and if you can catch the two different kinds of Black Swans in the same slate, that’s the ideal.

To win a GPP, you are served best by bagging the two Black Swans, one that helps you and one that hurts everyone else (and thus helps you further).

The DFS Black Swans to Play and Fade

In our NBA Trends, I have created two trends that capture the Black Swan-hunting mentality. A couple of notes:

First, as a Black Swan is rare these trends have small samples. That makes sense. With Black Swans, we are always in the realm of the uncertain, and the circumstances required to make the rare occur and the common not occur are themselves not to be seen on a daily basis.

Second, I’m not saying that these two trends are the best Black Swan trends one could create or even that you should necessarily use them. Rather, they are an example of the types of trends that you should create when employing the Black Swan mentality. And when it comes to Black Swans I truly think that everyone should be creating their own trends.

The Underowned Black Swan to Play

The type of underowned player whom few will expect to outperform will likely be a guy who has done little for a long time. So let’s start with players who over the last season have scored 0-20 points per game.

That group sucks . . . but under the right conditions, that group can produce some Black Swans.

First, let’s make sure that the players we look at actually have decent projected ceilings. Let’s give the cohort of potential Black Swans a minimum-projected ceiling of 20 fantasy points:

This group already looks presentable — but it’s far too common and relatively unproductive to be a Black Swan. Let’s keep adding factors. What if we apply a value investing perspective and focus on players whose salaries have not increased within the last year?

More productive, but still far too common. What if we look at players competing in the second of back-to-back games? 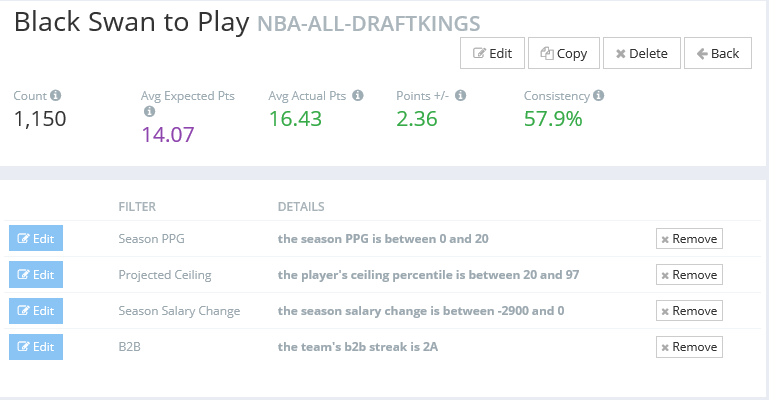 Does it make sense that players who don’t typically perform well would do better on the road in the second game of a back-to-back series than they would in all their other games? I think so. In this situation, it’s not uncommon for bench players to get more playing time than they usually do so that starters can stay fresh — especially if they are playing against a team that is no better than average and with which they are familiar: 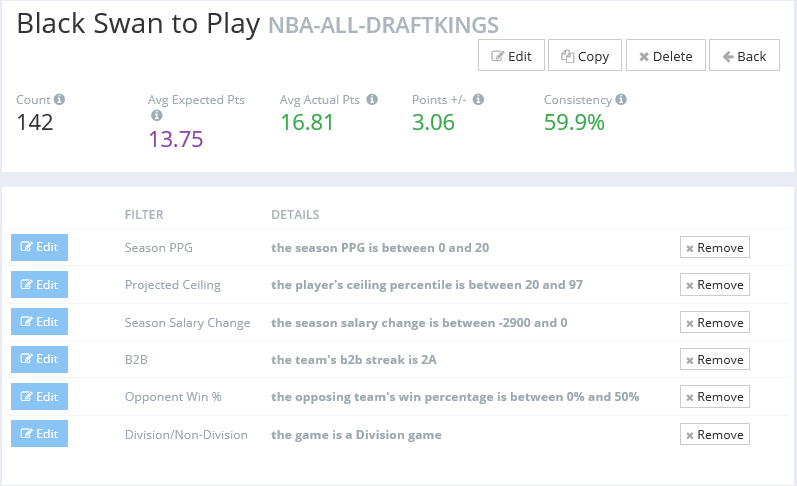 That’s pretty compelling — and note that if one wants to make additional tweaks to these factors the cohort can become even smaller and more productive. By combining a lot of factors that separately have an impact but rarely occur all at once, we can create a Black Swan out of a player who historically is unproductive.

The Overowned Black Swan to Fade

Superstars are superstars because they “always” perform to expectations — except they don’t. They are certainly great players:

But I expect that we can find a rare of combination of fairly common circumstances that render them less than the supermen that they normally are.

For instance, what happens when we as value investors we focus on players whose salaries have increased over the last year?

And out of these players, what about those competing in the second of back-to-back games?

They are still OK, but they aren’t elite. Does this trend make sense? Yes, for the same reason that it makes sense for bench players to overperform in these games. In this situation, starters often get less playing time so that can stay fresh, and they are also just generally not as good on the second night of a head-to-head series.

And, finally, what if we look at those players competing against a divisional opponent? 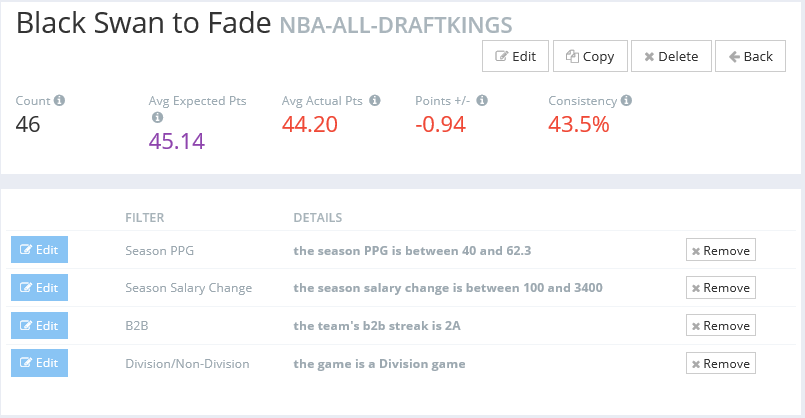 This situation doesn’t happen very often, but when it does, the trend is clear and it makes sense. These guys aren’t totally horrible — they’re almost adequate — but a big-salary player being almost adequate is enough in a GPP to keep you from cashing, let alone winning.

The Discovery of DFS Antifragility

It’s easy to take on faith that a stud will play like a stud regardless of the circumstances — but that isn’t always the case. Everyone knows that to win a GPP you need to find undervalued players who outperform their salary-adjusted expectations, and so that’s where most people focus their attention.

Just as important, though — and perhaps more important because it is more overlooked — is avoiding the stud player who underperforms. Too many people don’t give this aspect of the lineup-construction process nearly as much thought as they should.

I once heard the CEO of an incredibly successful mining financing company say the following when asked about the best investment his company ever made (and I’m paraphrasing): “It was the one we didn’t make.”

Avoiding the great players when they don’t do well is just as important as rostering the good players when they play great: rostering Steph Curry when he put up only 30 fantasy points against the Knicks but by salary was expected to score 47.9 points destroyed any chance one had of winning a GPP.

This dynamic of benefiting because of an event that causes others to fail — becoming stronger in the midst of chaos — Taleb endows with a particular name.

Antifragility — which I’m sure I’ll explore further in a future article.

If you have suggestions on material I should know about or even write about in a future Labyrinthian, please contact me via email, [email protected], or Twitter @MattFtheOracle.