I have recently been looking at salary cap dynamics in daily fantasy golf. This piece is a continuation of last week’s article on predicting PGA salaries and creating a Vegas Bargain Rating.

To summarize: DraftKings Golf DFS salaries are highly correlated with Vegas implied odds to win a tournament. Since that is the case, we can actually correlate those two variables, find a line of best fit to create a formula for predicting salaries, and look at the difference between actual salaries and theoretical salaries. From there, we can rate the differences on a scale and create a “Vegas Bargain Rating,” which would measure the value we’re getting on a player’s Upside.

Upside and other premium exclusive metrics are accessible via our free Ratings tool.

Let’s take a look at the numbers for this week’s Memorial Tournament:

As you can see, the Vegas Bargain Ratings for the top golfers are incredibly high compared to those of the rest of the field. This is something I’ve been noticing for a while and want to discuss further: The top golfers, in terms of implied upside, are drastically underpriced on DraftKings.

The reason for this discrepancy is the salary cap. You have only $50,000 to work with and need to roster six golfers. That is an average of $8,333 per golfer. DraftKings simply cannot elevate the top golfers to where they probably should be because then you wouldn’t be able to roster other golfers if you decided to roster the favorites. And, thus, rostering the top golfers would be prohibitive.

As it is now, the salary cap attempts to force you into a more balanced lineup, albeit with much less upside.

Take Rory McIlroy this week: His implied odds of winning are 13.3 percent, which means that (according to the correlation between odds and salary) he should be priced at $15,000. However, if he had that salary, then you would be able to roster him only if you were willing to spend only $7,000 per-player on your five other golfers. Your choice would essentially be A) Rory plus five mediocre golfers or B) a balanced lineup. And that’s not so fun, is it?

Leveraging Upside with the Stars-and-Scrubs Approach

What this pricing quirk says to us is that we should, in tournaments at least, heavily utilize a stars-and-scrubs lineup approach. Just this week, the three top golfers (Rory, Jason Day, and Jordan Spieth) are all coming into the Memorial off a Tour win. They all have strong odds of winning this week and carry substantial upside. However, their high salaries still don’t capture the height of that upside.

As a result, this week (and perhaps for the foreseeable future), I’m going ultra stars-and-scrubs.

And the Memorial Tournament even accentuates the degree to which a stars-and-scrubs approach is ideal. This is an invitational tournament, which means that the field is stronger and smaller. And yet the cut rules are no different. The top-70 golfers will make the weekend, which is notable because only 120 golfers this week will have to compete for those 70 spots. Consequently, those lower-tier golfers whom you need to match with your high-priced ones are much more viable this week.

On the recent PGA Daily Fantasy Flex podcast, Golf Director Colin Davy mentioned to me (when discussing this very issue) that the Vegas odds are to win, not to play well. Only one golfer can win the tournament, but we must roster six golfers.

However, in tournaments we want more from top-priced golfers than just a few solid rounds. We want them to (compete to) win the tournament. Having exposure to as many “winning” guys as possible is the strategy I’m adopting.

Let’s think about it this way: If all we do is seek to build a lineup with the highest collective Vegas implied odds to win, then it’s definitely in our favor to go ultra stars-and-scrubs. 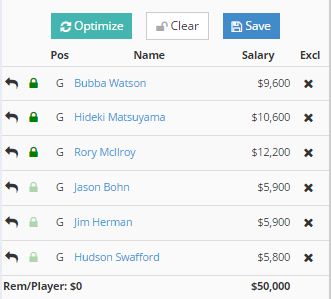 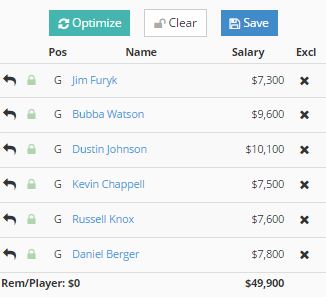 If You Want to Win a Tournament . . . Roster Golfers Likely to Win the Tournament

We are often very risk-averse in DFS, even if large-field tournaments call for incredible risk. The goal in GPPs is not to maximize your score. The goal is to maximize Upside and chances to win. Vegas does the heavy lifting for us, as the implied odds every week are a fantastic indicator of potential in golfers. The math confirms it: Ultra stars-and-scrubs is the way to go in tournaments.

The Limitations of PGA Vegas Odds