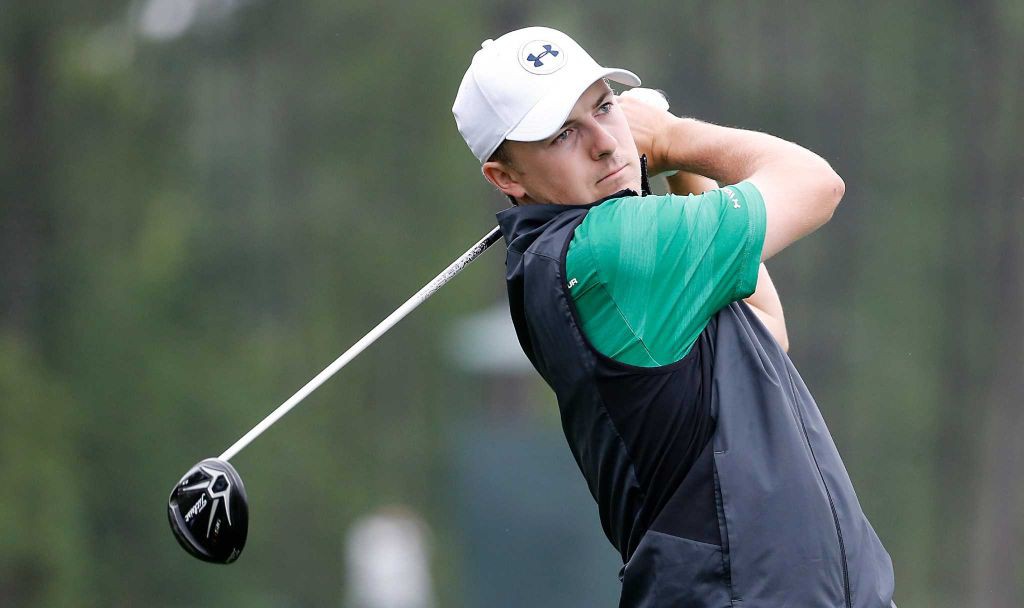 As an experiment, I’ve taken the Vegas implied odds (as of yesterday) for the 2016 DEAN & DELUCA Invitational and found a formula to “predict” what a player’s salary should be if we used only Vegas lines to create salaries. The R-squared value isn’t a perfect 1, of course, but it is roughly 0.8 — a correlation number high enough for me to continue.

Basically, I’ve taken all the golfers in the D&D, predicted their salaries, measured the difference between their DK and predicted salaries, and used that difference to create what I’ll term a “Vegas Bargain Rating.”

Think of it like this: If we’re judging golfers solely on their Vegas implied odds to win the tournament, which ones are the most mispriced?

He’s Not Just an Actor on Parks and Recreation

Let’s go through an example: Adam Scott, as of yesterday, has implied odds of 7.7 percent to win this week’s D&D Invitational. By our Vegas formula, that would set Scott’s DK salary at about $12,200. However, his actual salary this week is $11,300. Thus, we’re getting a “Vegas discount” of about $900 on his odds to win the tournament.

Scott isn’t priced $12,200 because there are other factors including recent form and course history that are also accounted for in salaries on a weekly basis. However, because those variables are worth so much less (0.2 to Vegas’ 0.8 on the R-squared scale), we can find value on a player’s Upside by predicting salary in this way.

The primary idea behind Vegas Bargain Rating also underlays our Plus/Minus metric: You can measure value only when you first set an expectation.

Similarly, based on players’ odds to win a tournament, we should have certain expectations for what their DK salaries will be. And, once those expectations are set, we have a potentially powerful tool — Vegas Bargain Rating — with which we can measure any pricing discrepancies and, thus, find value and potential. 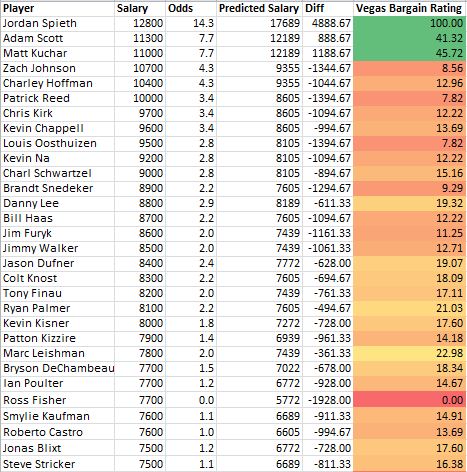 This shows what I’ve thought for a while: The top players, in terms of Upside, are undervalued. They are likely undervalued on a weekly basis. The difference between Spieth’s odds and Finau’s (14.3 percent vs. 2.0 percent) are much larger than their salaries imply ($12,800 vs. $8,200).

I’m not saying that Spieth is some overwhelming favorite to win and that you would be silly to fade him this week. He’s a big 6/1 favorite to win, but he’s only 6/1 to win. The odds are still that he won’t win, and PGA DFS has a lot of variance. Clayton Kershaw was a -365 favorite to win last night (with an implied probability of 78.5 percent). There’s just nothing like that ever in PGA DFS.

Still, Spieth possesses greatly undervalued Upside, and in tournaments it’s critical to find Upside — either hidden or misvalued. In a sport in which Upside can be difficult to find, Vegas Bargain Rating represents a new and intriguing tool.

This week, there is a lot of Upside in Spieth, Scott, and Matt Kuchar — more than is implied in their already-high DK salaries.

As promised, here is the table with all the golfers for this week’s D&D Invitational:

How Predictive Is Specialist Data?

How Much Does Line Movement Matter in PGA DFS?