Here’s where they place within our Week 13 fantasy football rankings (as of Tuesday evening).

Of these five, the two who stand out most to me are Wilson and Rodgers. The other guys I will highlight as needed in the section on players with week-winning upside.

He hasn’t been bad over the past four games, but he certainly hasn’t looked like the MVP frontrunner of Weeks 1-8 (per RotoViz Game Splits App). 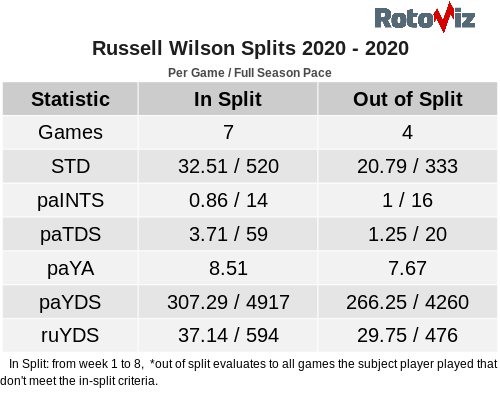 But we shouldn’t lose sight of the bigger picture: For the season, Wilson is on pace for 4,500 yards and 45 touchdowns passing. That’s phenomenal.

With 3,216 yards and 31 touchdowns passing, Wilson is in rare company: Before this year, only 10 quarterbacks in NFL history hit the 3,000-30 threshold in the first 11 games of the season.

Wilson is producing at a near-historic rate and is still No. 4 at the position with 28.3 fantasy points and +6.8 fantasy points over expectation per game (per RotoViz NFL Player Statistical Summary).

Opposing quarterbacks are only No. 28 against the Giants with 15.5 fantasy points per game, but Wilson actually has an advantageous matchup: The Giants have faced an easy schedule of backups (Nick Mullens, Kyle Allen, Alex Smith, Brandon Allen) and average-at-best starters (Mitchell Trubisky, Jared Goff, Carson Wentz). Wilson will easily be the best quarterback to face the Giants this season.

No. 1 wide receiver D.K. Metcalf has a tough matchup with shadow cornerback James Bradberry, but Metcalf is still talented enough to beat even the most tenacious cover man, and overall the Giants are No. 25 with an 18.1% pass-defense DVOA (per Football Outsiders).

Wilson should be able to produce against this opponent.

It’s just icing on the cake that Wilson is at home, where he has had notable splits in the post-Marshawn Lynch era (since 2016), per our FantasyLabs Trends Tool.

A must-start every-week top-three QB1 in season-long leagues, Wilson is a viable pay-up option for cash games and guaranteed prize pools in DFS. He leads all quarterbacks with his median, ceiling and floor projections in our main-slate Models.

Wilson is the No. 1 quarterback in the Bales Model for DraftKings and the SportsGeek Model for FanDuel.

First things first: Donkey that I am, I’m betting on the Packers this weekend.

Most of the ATS value Rodgers has provided since 2008 has come at Lambeau Field. You can bet on this game at DraftKings, where Rodgers trails only Patrick Mahomes with his +550 odds to win the 2020 NFL MVP Award.

Even though the Packers selected a backup quarterback in Round 1, a non-receiving back in Round 2 and an H-back in Round 3 — essentially refusing to get any help for Rodgers in maybe the most receiver-rich draft class in NFL history — the 37-year-old veteran is having a career year.

In only two games this year has Rodgers not been a fantasy QB1 (per RotoViz NFL Stat Explorer). 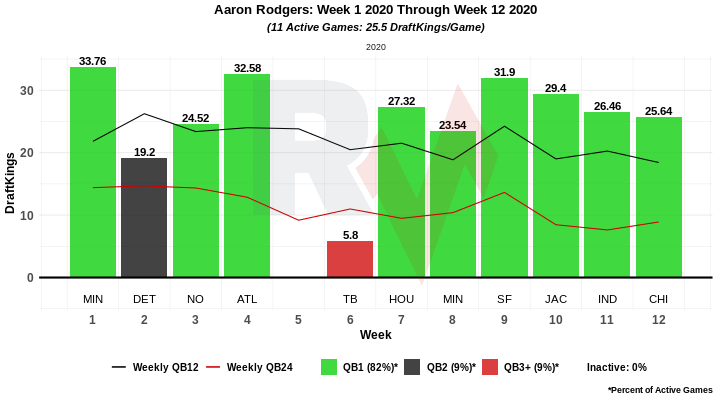 Granted, he was absolutely horrible in one of those games with a 160-0-2 passing line against the Buccaneers in Week 6, but that was right out of the bye so maybe Rodgers’ performance had more to do with rust than anything else. Plus, there’s little shame in underperforming against the Bucs pass defense.

Week 6 aside, Rodgers has dominated. In only two games this year has he scored fewer than three touchdowns total, and he has a league-high five games with four touchdowns passing.

The Eagles are No. 25 with a 49.9 coverage grade (per Pro Football Focus): Rodgers should have little trouble putting up fantasy points against them, especially since No. 1 wide receiver Davante Adams exploited Eagles shadow defender Darius Slay in 2018-19, when he was the top cornerback for the division rival Lions.

Adams on his own might gift 150 yards and two touchdowns to Rodgers.

Rodgers is a rock-solid high-floor/ceiling QB1 and the No. 1 option in the CSURAM88, Koerner, Raybon, SportsGeek and Freedman Models for DraftKings.

Deshaun Watson, Houston Texans (+3) vs. Indianapolis Colts (51 O/U): Opposing quarterbacks are just No. 30 against the Colts with 14.8 fantasy points per game, and Watson will be without playmaking wide receiver Will Fuller (suspension), but he has averaged 301.1 yards and 2.5 touchdowns passing in his eight games after opening the year against the Chiefs, Ravens and Steelers. Watson has a position-high +4.63 Projected Plus/Minus on FanDuel, where he leads all quarterbacks with a 99% Bargain Rating.

Justin Herbert, Los Angeles Chargers (-1) vs. New England Patriots (47 O/U): The Patriots are No. 30 with a 23.9% pass-defense DVOA, so the matchup is not one to avoid. In each of his 10 starts, Herbert has either 300 yards passing or three total touchdowns. At FanDuel, he’s -900 to win Offensive Rookie of the Year.

Kirk Cousins, Minnesota Vikings (-9.5) vs. Jacksonville Jaguars (52 O/U): The Vikings have a slate-high 30.5-point implied Vegas total, and the Jaguars are No. 31 with a 27.1% pass-defense DVOA. This weekend I’m betting on the Vikings, who are 19-7-1 ATS (41.4% ROI) in this “solar eclipse” spot as non-divisional home favorites. You can bet on this game at William Hill.

Last week the Jaguars were without four of their five top cornerbacks, and they might be without them again this week.

Tannehill has multiple touchdowns in all but two games.

Mitchell Trubisky, Chicago Bears (-3) vs. Detroit Lions (44 O/U): In his return to action last week, Trubisky was an acceptable-ish 242-3-2 passing and 3-11-0 rushing, and he is slated to get another start against the Lions, who are dead last with a 34.0 PFF coverage grade. In his four games against departed head coach Matt Patricia’s Detroit defense, Trubisky has dominated. 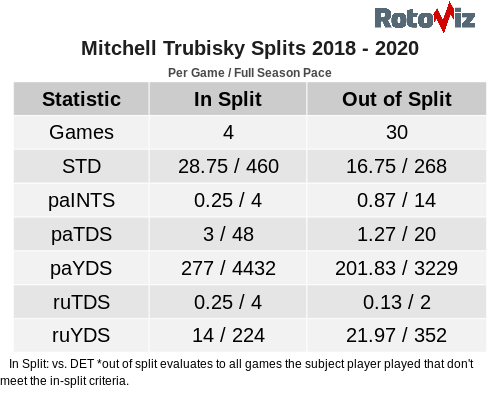 Mike Glennon, Jacksonville Jaguars (+9.5) at Minnesota Vikings (52 O/U): The Vikings are without starting cornerbacks Mike Hughes (neck, IR) and Holton Hill (foot, IR), and maybe — maybe? — Glennon will get back wide receivers D.J. Chark Jr. (ribs) and Chris Conley (hip). I mean, there’s no way I’ll be starting Glennon … I gotta be able to look myself in the mirror … but he’s probably not the slate’s worst quarterback.