Here’s where they place within our Week 13 fantasy football rankings (as of Thursday evening).

Of these six, the two who stand out most to me are Waller and Akins. The other guys I will highlight as needed in the section on players with week-winning upside.

Odds as of Thursday evening and via DraftKings Sportsbook, where you can get up to a $1,000 sign-up bonus today.

Waller has a good matchup: Opposing tight end units are No. 3 against the Jets with 10.1 fantasy points per game on 50-572-9 receiving. Overall, the Jets are No. 31 with a 35.9 coverage grade (per Pro Football Focus).

Three targets is not a lot, but the guys with at least three against the Jets have put up fantasy points (with the exception of Dawson Knox and Durham Smythe, LOL).

And it doesn’t help the Jets that safety Bradley McDougald (shoulder, IR) is out and reportedly not close to returning.

Any tight end is in play when facing the Jets — and Waller is one of the league’s best tight ends, ranking No. 1 at the position with a 27% target share and 0.55 WOPR.

Among tight ends, Waller trails only Kelce and George Kittle with 79.4 air yards and yards after the catch (AirYAC) per game

But with Kittle (foot, IR) on the sidelines, Waller is the clear No. 2 tight end behind Kelce each week.

Waller has been at least a fantasy TE2 in all but one game since last season, and more often than not he has been a TE1 (per RotoViz NFL Stat Explorer). 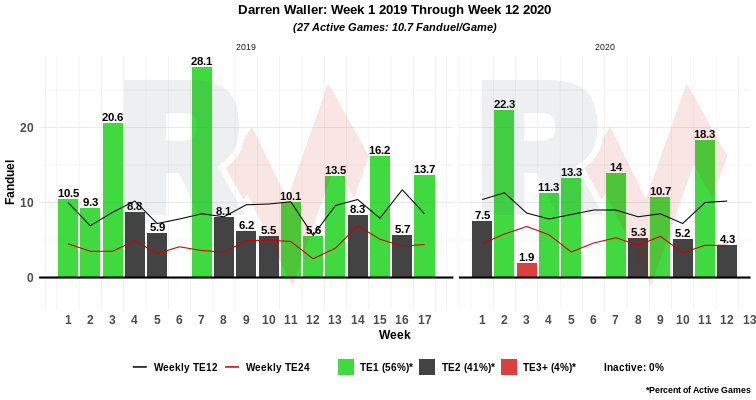 Given that Kelce is playing on Sunday Night Football, Waller leads all main-slate tight ends in our Models with his median, ceiling and floor projections.

Waller is a locked-in top-three TE1 in season-long leagues and the No. 1 option in the Bales, Koerner, SportsGeek, Hodge and Freedman Models for FanDuel, where he has position-high marks with 10 Pro Trends and a 93% Bargain Rating.

Akins is a speculative play this week, but he’s certainly intriguing.

His matchup is tough. The Colts are No. 8 with a -19.2% pass-defense DVOA against the position (per Football Outsiders). Opposing tight end units are No. 30 vs. the Colts with 4.9 fantasy points per game on 47-414-1 receiving.

It’s not hard to imagine an underwhelming Week 13 performance.

But Akins might see a massive increase in playing time against the Colts, and with the extra snaps could come extra targets.

At wide receiver, the Texans are in Armageddon. Will Fuller (suspension) is out, Kenny Stills (released) is gone and Randall Cobb (toe, IR) is sidelined. And that means the Texans in three-wide sets will roll out Brandin Cooks, Keke Coutee and Isaiah Coulter.

Cooks has long been an underappreciated receiver, but Coutee and Coulter are unproven.

Despite flashing with 17-160-1 receiving on 22 targets in his first two NFL games in 2018, Coutee has done little of note since then. For most of 2020, Coutee has been a gameday inactive. As for Coulter, he’s yet to play an NFL snap.

Given how thin the Texans are at wide receiver, they might opt to use two tight ends instead of three receivers in their base formation, and if that happens, Akins could have a big game.

Akins exited Week 4 early with concussion and ankle injuries that sidelined him for a month, and since returning in Week 9 he is just 8-107-0 receiving on 13 targets with a 42% snap rate in four games. But before his injuries, Akins had a 78% snap rate in Weeks 1-3, and he had the production to go with it (per RotoViz Game Splits App). 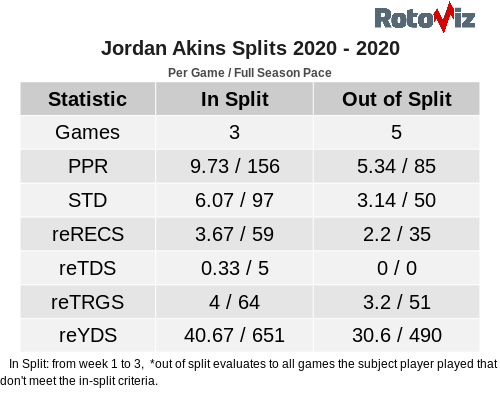 Akins hasn’t been on the injury report in weeks, so he’s presumably healthy enough to play more snaps, and given the wide receiver situation, I bet he will.

Akins is an upside TE2 in season-long leagues and the No. 1 option in the Bales, Koerner, Raybon and Freedman Models for DraftKings.

T.J. Hockenson, Lions (+3) at Bears (45 O/U): No. 1 wide receiver Kenny Golladay (hip) looks unlikely to play, and pass-catching back D’Andre Swift (illness/concussion) is still uncertain, so Hockenson could could see more than his usual allotment of targets. No. 5 at the position with 11.5 expected fantasy points per game, Hockenson has been a fantasy TE in 55% of games this year. 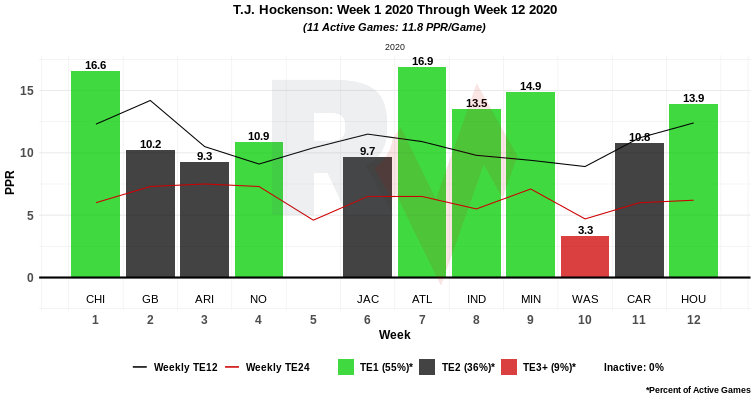 Opposing tight end units are No. 5 against the Bears with 10.0 fantasy points per game on 62-635-8 receiving. Hockenson is the top tight end in Josh Hermsmeyer’s Week 13 Air Yards Buy-Low Model.

Evan Engram, Giants (+10) at Seahawks (47 O/U): Quarterback Daniel Jones (hamstring) will likely miss Week 13 … and that might be a good thing for Engram? Even with the Week 7 return of No. 1 receiver Sterling Shepard, Engram has a team-high 24% target share and is No. 2 among all tight ends with 13.1 expected fantasy points per game over the past five games.

Hayden Hurst, Falcons (+2.5) vs. Saints (45 O/U): Although he’s not considered one of the best tight ends in the game, Hurst has been a fantasy TE1 in 55% of his games this season. 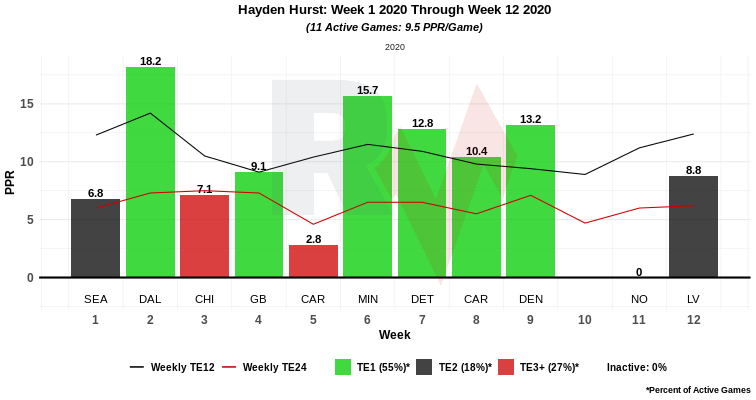 No. 1 receiver Julio Jones (hamstring) missed last week and seems unlikely to play, so Hurst could be in line for extra targets. Hurst has position-high +2.71 and +2.25 Projected Plus/Minus values on DraftKings and FanDuel.

Tonyan has notably negative splits with No. 1 receiver Davante Adams … 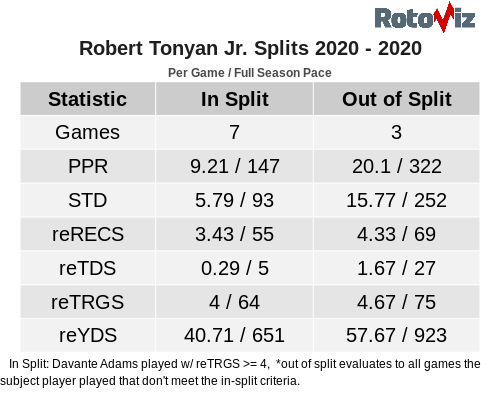 … but he still seems to be a favorite of Rodgers, given his 10-111-2 receiving performance over the past two weeks.

Kyle Rudolph, Vikings (-10.5) vs. Jaguars (51 O/U): The Vikings have a slate-high 31.0-point implied Vegas total, and Rudolph could see extra targets without No. 2 tight end Irv Smith Jr. (back), who has missed two of the past three games. This weekend I’m betting on the Vikings, who are 19-7-1 ATS (41.4% ROI) in this “solar eclipse” spot as non-divisional home favorites. You can bet on this game at FanDuel.

Opposing tight end units are No. 2 against the Jaguars with 10.1 fantasy points per game on 45-594-9 receiving.

Anthony Firkser, Titans (-5.5) vs. Browns (53.5 O/U): In the seven games since No. 1 tight end Jonnu Smith (ankle) suffered a lingering injury, Firkser has been the team’s top receiving tight end.

Of course, neither guy caught a pass last week, so … I’ve had better.

For his career, Firkser has a robust 8.5 yards per target.