With the NFL Draft and free agency having come and gone, we’ll break down all sorts of fantasy-relevant questions entering the 2018 season. Up next is a look at the Philadelphia Eagles’ new unquestioned lead back using the Rushing Expectation methodology.

The Dolphins’ struggles running the ball in 2017 are well documented. Miami finished 30th in Adjusted Line Yards, per Football Outsiders, with their 3.26 mark in the 2nd percentile overall since 2000. After managing 3.4 yards per carry through his first seven games, Jay Ajayi seemingly took the brunt of the blame and was shipped him to the Eagles for a measly fourth-round pick — a trade that ended up with Ajayi wearing a Super Bowl ring.

In both real life and DFS, Ajayi was far better able to meet expectations with the Eagles. Per our NFL Trends tool, Ajayi hit value on DraftKings in 44% of games with Philadelphia but only 28% of games with Miami.

What changed for Ajayi in Philadelphia, and what does it mean for 2018?

Note: If you’re not familiar with Rushing Expectation, watch the video below for a brief intro.

The largest discrepancy in Ajayi’s rushing usage between Miami and Philadelphia was between the tackles. In Miami, he most often ran straight up the middle and rarely to the outside. 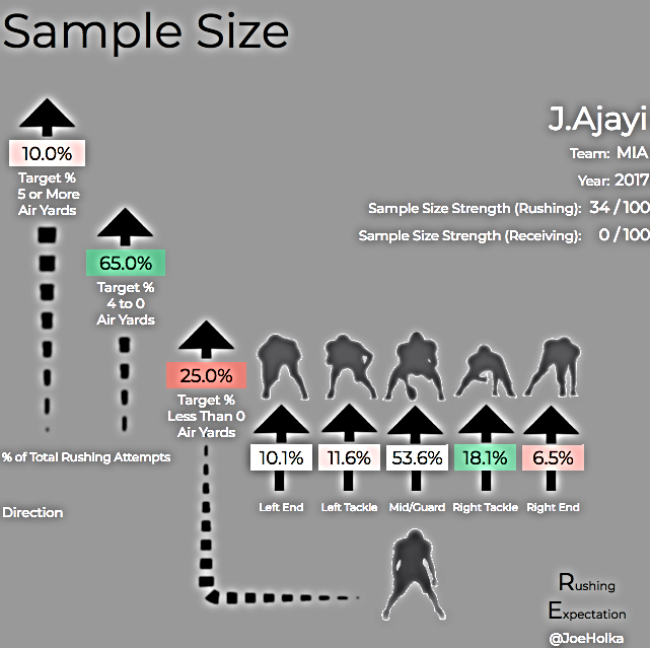 The Eagles put a much larger emphasis on getting Ajayi to the edge to turn the corner, usually on tosses, sweeps, or stretch plays. 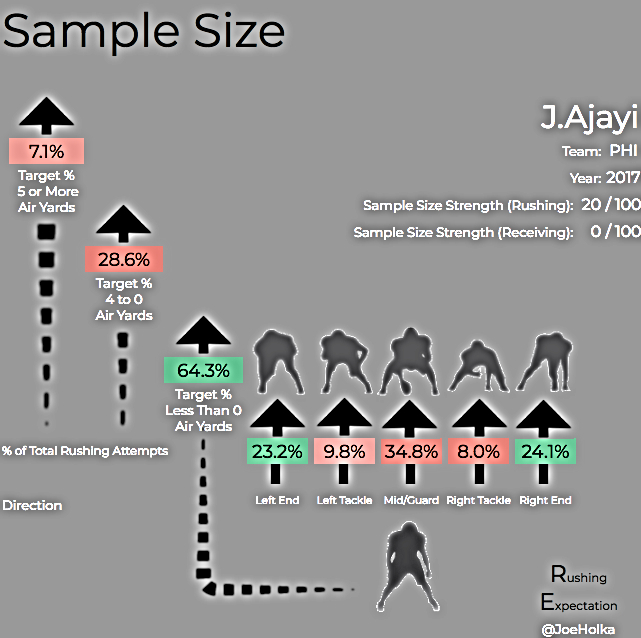 Neither Miami or Philadelphia utilized Ajayi in the passing game much. He averaged only 2.0 targets per game with Miami and 1.4 with Philadelphia, though the Eagles gave him a slight bump with eight targets over their first two playoff games before failing to look his way in the Super Bowl.

The sample size in the passing game is very small — far outside the scope of my typical sample size — but one conclusion that can be drawn is the Eagles were more comfortable giving Ajayi targets behind the line of scrimmage and letting him create in space.

In Miami, Ajayi performed well above expectation behind struggling center Mike Pouncey, who was counted on too heavily in the run game. Ja’Wuan James was probably the team’s top lineman, so it makes sense that Ajayi ran off right tackle at an above-average rate, though he didn’t do much with those carries. Outside of James, the entire Dolphins O-line from 2017 was ugly: 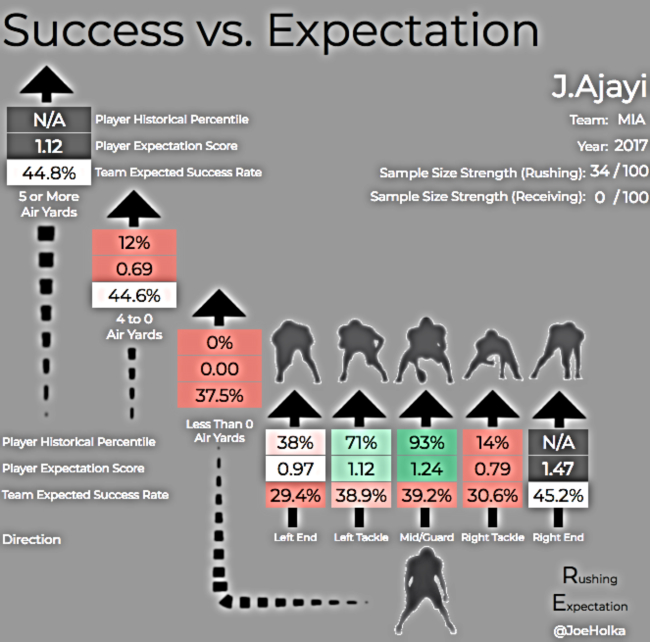 Ajayi’s most efficient running lane overall tends to be off left tackle, though Tunsil in Miami, and later, Halapoulivaati Vaitai in Philadelphia, were both below average last season. In fact, if there was a weak link in the spectacular Eagles line, it was Vaitai:

Despite Vaitai’s poor overall grade, he improved down the stretch, and along with Johnson, accounted for Ajayi’s most efficient running lanes (off tackle). 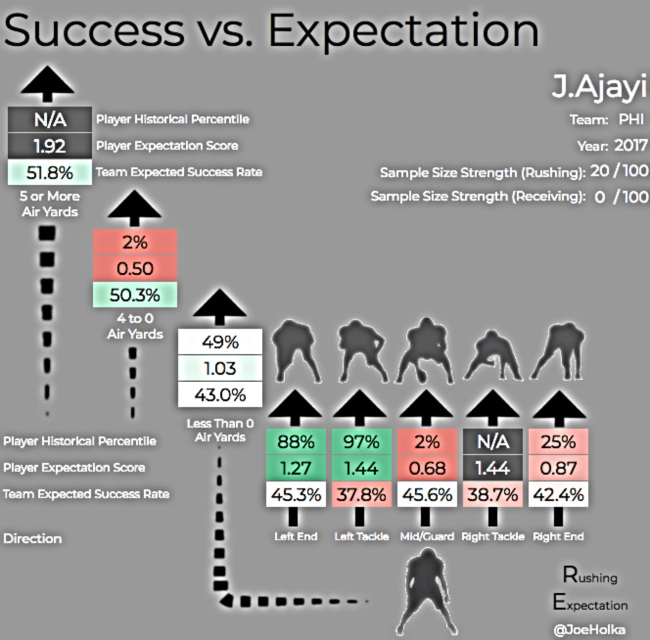 What’s most peculiar about Ajayi’s rushing usage with Philadelphia was that despite their biggest advantage being Kelce at center, Ajayi saw a sharp decline in attempts straight up the gut. Eagles coaches may have been onto something; unlike in Miami, where Ajayi tended to gain more yardage than his center Pouncey blocked, he performed well below expectation when running up the middle in Philadelphia.

The Eagles are expected to bring back all their starters up front this season. Jason Peters (No. 19 of 83) is on track to return to the left tackle spot in place of Vaitai after suffering a season-ending knee injury before Ajayi’s arrival. That could certainly bode well for Ajayi moving forward if Philly plans to continue to try and get him to the edge. However, Ajayi also has to be better about not bouncing runs outside — a bad a habit he also had early in his career and in college — in order to better take advantage of Kelce’s stellar interior blocking at center.

Despite limited help from his blocking in Miami, Ajayi actually performed higher above expectation as a runner there than in Philadelphia after adjusting for O-line quality: 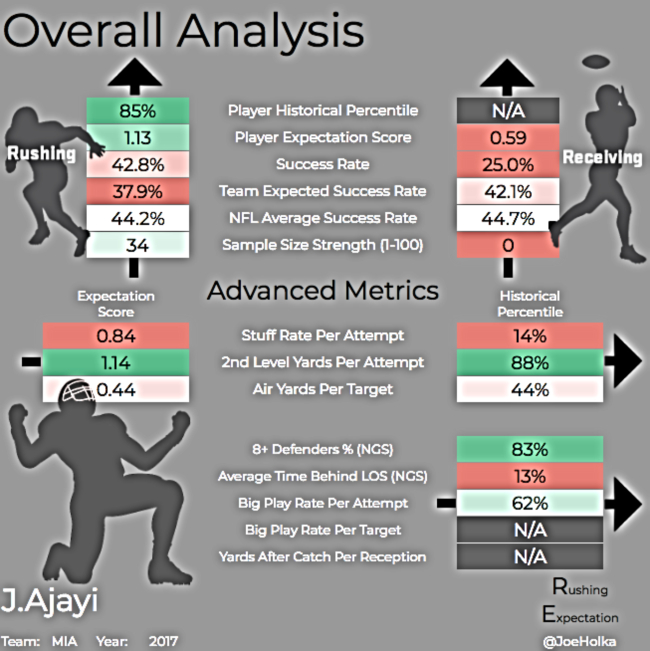 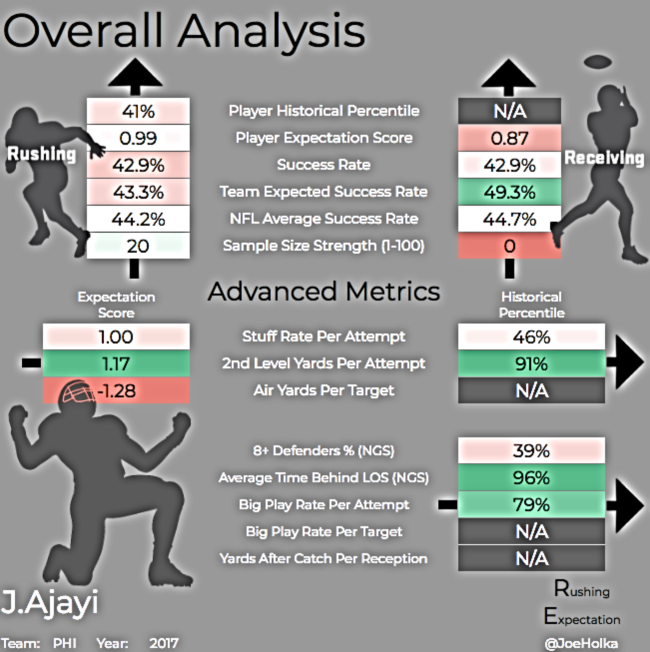 Ajayi is intense, aggressive, and runs with reckless abandon at times. He stands out at the second level, and he knows how to create big play. Behind the Eagles offensive line, Ajayi should be able to build on his highly efficient second half of 2017, and even modest improvement as a pass catcher could increase his upside even more. He’s a strong RB2 pick with RB1 upside.