Why the Spread Matters Less Than You Think for NFL DFS

We know that teams run the ball more when they have the lead and in games they win. Given this information, can the spread be used to predict play calling?

Inspired by an idea mentioned in the Funnel Rating series created by Bryan Mears, which breaks down what kind of plays a team should call based on the strengths of the opposing defense, I set out to chart how play-calling tendencies are impacted by the spread. My initial hypothesis was that teams favored by more points would throw the ball less (at least by percentage) and vice versa. This would make intuitive sense, since teams run when they have a lead, but how strongly does the relationship between play calling and spread correlate?

To figure out the true relationship, I looked up the closing spread and box scores of every NFL game from 2015 to 2017. All drop backs where credited as passing plays in an attempt to judge coordinators’ intentions. Data were limited regarding quarterback scrambles versus designed runs, so those were all included in the running totals. The chart below also reflects the total number of plays called at each spread, not just the percentages, so faster paced teams impacted the total more. 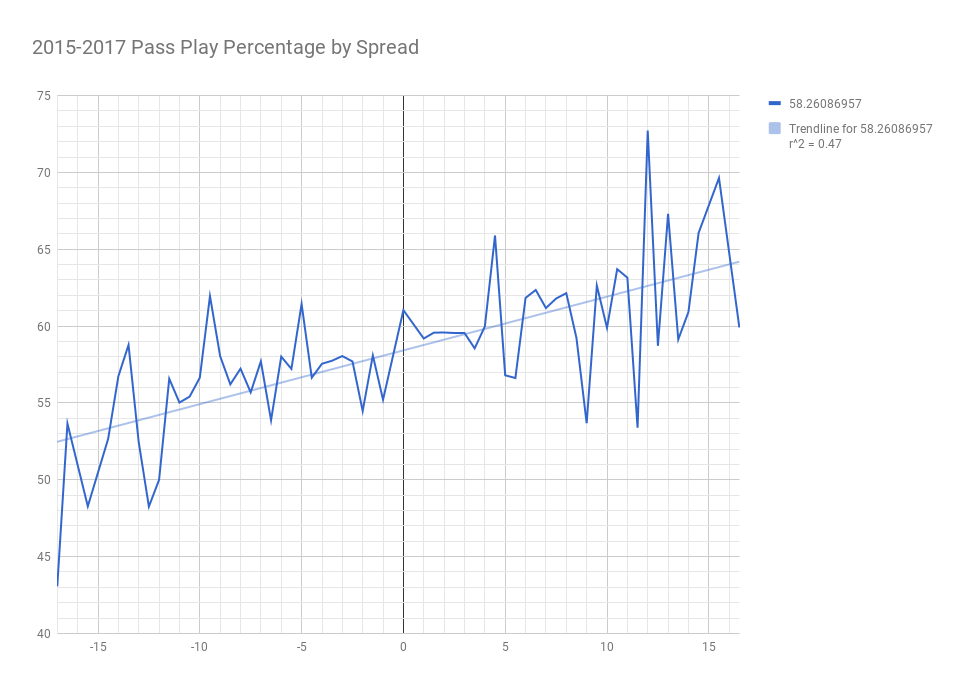 Percentage of pass plays called at each closing spread, 2015-2017

With roughly 1,500 data points, we see a clear positive correlation between spread and percentage of pass plays called. The correlation is 0.47 on a 0-to-1 scale, so the spread is fairly predictive of play-calling tendencies, but there is only about a half percentage point increase in pass plays called per point increase in spread. With the average NFL team in this time frame calling 65 plays per game, this means that a three-point dog throws about two more passes per game than a three-point favorite. In all likelihood, this isn’t enough of an increase to factor into lineup construction.

There are a variety of factors at play that can explain the data. As we know, teams that are winning run the ball more. Unfortunately, many coaches and play callers interpret this to mean that running causes wins when in fact the inverse is true. Per the FantasyLabs Trends Tool, quarterbacks who are favored average a +0.3 DraftKings Plus/Minus, which means that DFS sites overweight the extent to which winning teams scale back the passing game. Favorites are priced slightly higher, at an average of about $5,900 on DraftKings versus $5,400 for underdogs, but they’re not priced as high as they should be. It’s not a huge inefficiency, but it’s certainly one that can be exploited.

Another potential explanation is that (some) losing teams struggle due to their inability to throw the ball effectively. These teams lean on their running games more than game script suggests they should simply because they don’t trust their quarterbacks. As an example, the 2017 Bears were 26th in passing percentage despite their 5-11 record. On the whole, losing teams pass more (the 0-16 Browns were fifth), but many coaches seem to hide their struggling quarterbacks by keeping the ball out of their hands. This leads to suboptimal decision-making on the part of these coaches, which skews our data.

Finally, just because teams are favored doesn’t mean they will win. And even when they do, they don’t always establish leads large enough to warrant that they take the air out of the ball. The 2017 Lions were notorious for slow starts, and they passed at the league’s second-highest rate even with a 9-7 record. Every other team in the top five (Dolphins, Buccaneers, Giants, and Browns) finished no better than 6-10. To find the sweet spot between game script, DFS pricing, and ownership percentage, we might want to target losing teams in spots where they’re favored.

This data is important mainly for what it doesn’t tell us. Many DFS players are hesitant to roster quarterbacks and pass catchers on teams favored to win big. We’d rather target players we think will be losing and thus forced into relying on the passing game. Especially in cash games, it’s probably worth it to roster quarterbacks and wide receivers on favored teams as long as everything else is equal. The slight decrease in pass attempts is more than made up for with more production and efficiency. In guaranteed prize pools, though, favored quarterbacks on average have double the ownership relative to dogs. Taking on elevated ownership probably isn’t worth the extra point or so gained in expected Plus/Minus.

The optimal scenario for passing attacks seems to be underdogs with favorable matchups.

Trends with an opponent plus/minus over 2.5

Underdog quarterbacks with Opponent Plus/Minus ratings of at least +2.5 actually outperform (in terms of Plus/Minus) favorites with the same matchup quality on DraftKings, and they further benefit from a reduction in ownership of three percentage points and increase in Upside Rating of one percentage point. This trend does a good job of finding spots where mediocre quarterbacks can have big days. It caught games of at least four points above expectations from such unlikely sources as Deshone Kizer, CJ Beathard, Blaine Gabbert, Jacoby Brissett, Josh McCown, and Brian Hoyer.

There’s a lot of information to suggest that good players are mostly matchup-independent assets but mediocre-to-bad players seem to benefit more from advantageous spots without catching the DFS public’s eye. This also means that underdog running backs aren’t obvious fades. We know already that running back dogs hold value if they’re used a lot in the passing game. Even when we don’t adjust by average target per game, running back Plus/Minus on DraftKings is essentially the same regardless of which side of the spread a player is on. Underdogs also come with reduced ownership (8.1 percent versus 9.7 percent).

In future articles I will break down how certain play callers historically act with different spreads. This data should allow us to make better guesses as to how teams will respond to different situations. Hopefully it will also enable to find low-owned and valuable passing attacks. The data we have on new situations are limited at the start of the year, but by breaking down play-calling tendencies we can project how coaches and coordinators might handle their new teams.

Levitan: How I Use the New FantasyLabs NFL Correlations Page

SportsGeek: How I Use the NFL Player Props Tool