It’s been just a few weeks since the last major, but there’s another one on the docket this week. The PGA Championship should be a fun tournament, as we get all of the top 50 golfers in the Official World Golf Rankings competing for a $1.89 million purse.

>> Download The Action Network App to get real-time PGA odds, track your bets and follow all of our experts’ picks.

Bellerive is a lengthy par-70, 7,317-yard course, which should favor the bombers. However, accuracy should also play a role, as this course is lined with trees and has 16 water hazards along the way. Justin Thomas has mentioned that driving and controlling the ball off the tee are needed to score well here. Additionally, Dustin Johnson has said that the thick rough at Bellerive could be problematic, which further stresses the importance of staying in the fairway.

With all the rain over the past few days, the course is extremely soft, which could translate to lower scores and favor certain golfers. Bellerive also features large greens, so it may not be too difficult to hit greens in regulation (GIR), but proximity to the hole will be important. With the soft greens, it’ll be like throwing darts for the golfers. This week I’ll be favoring bombers along with golfers who excel at par-4 and -5 scoring, but I also won’t ignore accuracy, given the tree-lined fairways and thick rough. 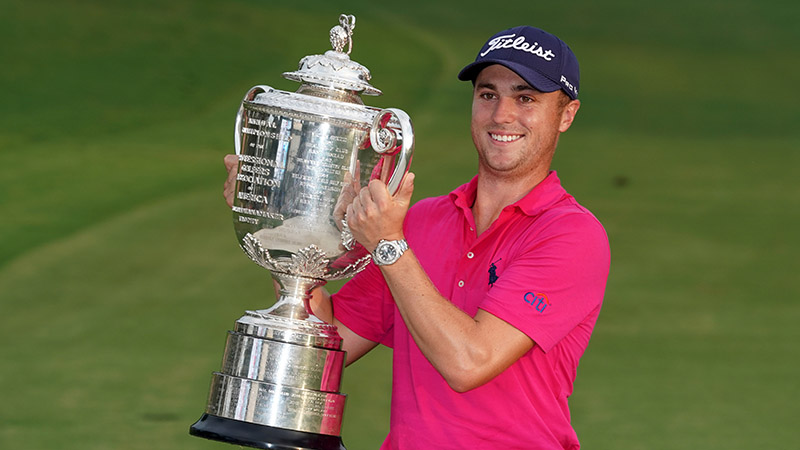 To nobody’s surprise, Dustin Johnson ($11,400) has the highest salary and odds (11.1%) to win. His 67.7 Long-Term Adjusted Round Score (LT Adj Rd Score), birdies per tournament (16.3) and average adjusted strokes on par-4 and par-5 holes are among the highest marks in the field. Further, he ranks fourth in proximity to the hole this season. I would expect DJ to have high ownership after his late-round surge at Bridgestone last week. Rostering him will force you to look further down the salary tiers, but there are some decent players down there if you choose to go that route. If I’m mass multi-entering tournaments, I’ll likely be underweight on him. I could potentially see a full fade, although that’s not for the faint of heart.

Rory McIlroy ($11,100) and DJ are top-four in the model I created this week. McIlroy is one of my favorite plays: His 315.1-yard LT Driving Distance (DD) is the third-highest mark in the field. He has played well this year, ranking 10th in Strokes Gained: Tee-to-Green, and he has historically dominated at majors: He’s made 31-of-39 cuts, and at the PGA Championship he owns two wins and five top-10 finishes, missing the cut just once since 2009.

Rickie Fowler ($10,200) is always intriguing to me despite the fact that he has only four career wins to his name. After all, he has 62 top-10 finishes in nearly one-third of his starts. His 68.2 LT Adj Rd Score is the fourth-best mark in the field, and he’s an excellent putter and scrambler (28.6 LT Putts Per Round and 62.7% LT Scrambling). Fowler isn’t as long off the tee as some of the top-priced guys, but he hits more fairways, and he ranks 31st in proximity to the hole this season.

>> Sign up for The Action Network’s daily newsletter to get the smartest PGA conversation delivered into your inbox each morning.

One way to find value is to leverage LT Adj Rd Score. If you sort the field by the metric, you are looking at a list of players who have been the best golfers over the past 75 weeks. Those who have low salaries make great value plays.

Beau Hossler ($6,900) has been excellent this season, averaging a +17.63 DraftKings Plus/Minus with 88% Consistency Rating. His last missed cut was all the way back in March at the Valspar Championship. Hossler should be a decent bet to make the weekend if you need some salary relief.

If you’re looking for a low-owned (2-4% projected ownership) tournament play, Austin Cook ($6,900) has hit 69.5% of fairways and 68.7% of GIR over the past 75 weeks. Additionally, he’s been excellent at limiting bogies, averaging just 7.7 per tournament while boasting a 63.6% LT Scrambling, and his -1.2 average adjusted strokes on par-4s is the eighth-best mark in the field.

Joaquin Niemann ($7,600) is my favorite play of the whole tournament. The combination of his price and outstanding metrics is sucking me in like a tractor beam. He can mash the ball (311.4-yard LT DD) and hit fairways (66.3% LT DA) along with GIR (71.7%). Over the past 75 weeks, there are only five golfers in the field currently driving over 300 yards while hitting 70% GIR. It’s difficult to find a golfer who boasts his upside at his price.

Marc Leishman ($7,800) and Webb Simpson ($7,700) are underpriced with their 68.6 and 68.8 LT Adj Rd Scores. Simpson ranks sixth in Strokes Gained: Putting this season, and he’s an expert bogey avoider, evidenced by his field-best 64.1% LT Scrambling.

Paul Casey ($8,000) is always underpriced in this field even though he possesses the second-best LT Adj Rd Score (68.0) behind DJ. Casey’s 15.3 birdies per tournament is the eighth-best mark in the field, and he boasts an absurd 2% missed-cut rate over the past 75 weeks. Since January 2017, Casey has missed just two cuts: The Sony Open in 2017 and at RBC Heritage this year.

Patrick Cantlay ($8,400) has the field’s seventh-best 68.4 LT Adj Rd Score. He’s been excellent since June, posting four top-15 and two top-seven finishes in his past five tournaments. He’s difficult not to use as a core play if you’re taking a balanced approach to your rosters.

Brooks Koepka ($9,600) loves majors, where throughout his career he’s made 17-of-19 cuts, including 12 top-25 finishes and seven top-10s. He’s one of the best birdie makers on tour, averaging 16 birdies per tournament over the past 75 weeks, the third-best mark in the field.

It’s difficult to pick apart the low $9,000 price range. John Rahm ($9,100), Jason Day ($9,000) and Tommy Fleetwood ($9,300) are all phenomenal plays. Depending on how you construct your rosters, it’s not hard to roster all three guys if you want. Given Day’s history at the PGA Championship and his prowess on the greens (28.1 LT PPR and first in Strokes Gained: Putting this season), I’d side with him if forced to choose one of these three.

Justin Thomas ($9,700) would likely be more expensive if prices were released after the WGC event last week, but we’re still getting him at a discount considering his price hasn’t been below $10,000 since September 2017 (excluding last week’s WGC event).

Ryan Fox ($7,100) is an intriguing GPP flier if you’re feeling frisky. He leads the field in driving distance (316.5-yard LT DD) while hitting 70.8% of GIR in the process, and he hasn’t missed a cut since April.

What to Know About the 2019 WGC FedEx St. Jude Invitational Course for PGA DFS

2019 Tour Championship DFS Tips and Strategies: Should You Pay Up for Justin Thomas?