On FanDuel there are two pitchers who costs more than $9,000:

Corbin is just on the early slate, and he’s easily the best option of any of the early slate pitchers. His 10.94 K/9 is the highest mark by over two strikeouts, and his 7.9 K Prediction leads the slate by 1.9. He has a tremendous matchup against a projected Giants lineup that has a 27.1% strikeout rate and .264 Weighted On-Base Average. Further, the Giants rank just 27th in Weighted Runs Created Plus (wRC+) against lefties this season, per FanGraphs.

Corbin also has the most favorable odds, as the Nationals are -201 moneyline favorites while the Giants are implied for a meager 3.3 runs. Historically, pitchers with comparable salaries, K Predictions and Vegas data have averaged a +3.76 FanDuel Plus/Minus with a 60% Consistency Rating, per our Trends tool.

Options are thin on the main slate with a handful of teams implied for 5.0 runs. However, the Royals are not one of them. That said, their projected lineup has a middling 24.9% strikeout rate and .324 wOBA, and we only have German projected for around 87 pitches, which will put him at around five or six innings of work depending on how efficient he is.

Still, with not many good options to choose from, he should be in consideration since the Royals are implied for 3.8 runs and the Yankees are the largest favorite (-189 moneyline) on the main slate.

Value options are scarce on Thursday on both the early and the main slate. But Ivan Nova could be worth a look if you’re desperate. He has a 5.28 ERA this season, but his 3.63 xFIP suggests he’s been rather unlucky over his past three starts. Next up is a Tigers lineup that ranks 27th in wRC+ against lefties this season, and their projected lineup has a 25.7% strikeout rate and subpar .304 wOBA against right-handed pitchers over the past 12 months.

Tanner Roark: He’s an interesting tournament play since the Reds are +148 dogs against the Padres. But he has our third-highest Projected Plus/Minus on FanDuel against a team that ranks 23rd in wRC+ against righties this year.

Chris Paddock: The 23-year-old has been disappointing from a fantasy standpoint, but he has a solid 3.87 xFIP this year. On deck is a Reds team that ranks 28th in wRC+ against right-handed pitchers this year, and they have a slate-low 3.3 implied run total. He’d be an intriguing alternative after German for cash games, given that the Padres are -158 moneyline favorites. 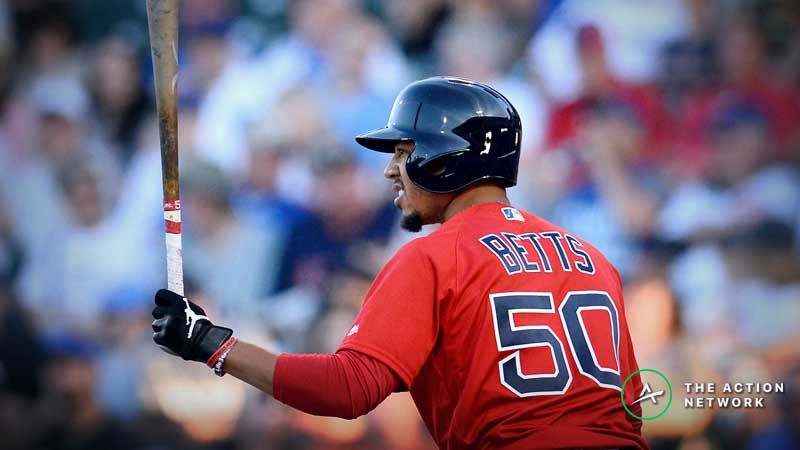 With our Lineup Builder, it’s easy to incorporate stacks into DFS lineups. The top four-man early-slate DraftKings stack from the CSURAM88 Player Model belongs to the Atlanta Braves.

The top non-Coors main-slate FanDuel stack in the CSURAM88 Model belongs to the Los Angeles Angels.

The Angels’ 5.0 implied run total is on par with some of the other high totals on the slate, as there are presently five teams at the time of writing implied for 5.0 runs or more.

On deck is the right-handed Felix Hernandez, which should be a positive for this stack since the matchup against a righty will put all of them on the positive side of their wOBA and isolated power (ISO) splits. Trout is a righty masher with his elite .496 wOBA and .354 ISO against them over the past year.

Calhoun hasn’t done much of late, but he’s in good form with positive differentials in batted-ball distance, exit velocity and hard-hit rate. The same can be said for Bour, who has also been unlucky over the past 15 days with his +49 Recent Batted Ball Luck (RBBL).

On the early slate, Ryan Zimmerman could be a cheap way to get exposure to one of the higher implied run totals (4.8) on the slate. Over the past 12 months, he’s destroyed left-handed pitchers, hitting them to the tune of a .521 wOBA and .302 ISO. He’s disappointed as of late, sporting a -2.58 DraftKings Plus/Minus over his past 10 games, but his +24 RBBL suggests he’s been unlucky over that span.

Cody Bellinger is among the highest priced batters on the main slate, which could make him a solid pivot from the Coors Field hitters in his price range. It’s an excellent spot for Bellinger, who has throttled right-handed pitchers over the past year, sporting an elite .414 wOBA and .297 ISO. He’s also in good form with his 227-foot average batted-ball distance, 96-mph exit velocity and 51% hard-hit rate. The Dodgers are in a good spot at Miller Park with a 5.0 implied run total.

Mark Reynolds could be cheap exposure to the Rockies and their 5.5 implied run total. He’s been decent against right-handed pitchers over the past 12 months, posting a .313 wOBA and .259 ISO against them. He’s generated a fair amount of hard contact over his past 10 games, evidenced by his 91-mph exit velocity and 52% hard-hit rate. Hitters with comparable marks at Coors Field have historically averaged a +1.88 FanDuel Plus/Minus.