Today’s slate is loaded with elite pitching options; there are five players priced $10,000 or above on FanDuel: 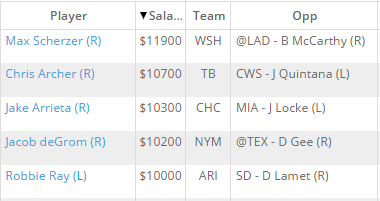 Many of these guys are in stellar recent form, but we’ll start with Nationals righty Max Scherzer, who is the most expensive option at 13,000 on DraftKings and $11,900 on FanDuel and has done this over his last two games:

Come on. That said, it’s not as if he faced great teams: The Padres and Giants rank 29th and 30th with wOBAs of .285 and .282. They probably have the worst lineups in baseball, so it’s no surprise that Scherzer beat up on them. His Statcast data is predictably awesome: Over those two games, he allowed a batted ball distance of 191 feet, an exit velocity of 86 miles per hour, and a hard hit rate of 22 percent. Today’s matchup isn’t especially easy — he’s facing a Dodgers team currently implied for 3.7 runs — but it also may not matter. He leads the slate with a 10.0 K Prediction. Let’s use our Trends tool to put that ridiculous number in context. Since 2014, there have been 15,928 starting pitchers on DraftKings. Here’s their collective production:

We’re not big on threshold trends — if Scherzer’s K Prediction moves down by just 0.1 strikeouts, he all of a sudden doesn’t qualify anymore — so let’s set a respectable range of 9.5 to 10.5 to account for potential movement:

Scherzer is still in a rare situation, and comparable pitchers have historically averaged 26.34 DraftKings points and a +6.01 Plus/Minus. As expected, they’ve been owned at a high rate in guaranteed prize pools, and that’s unlikely to change today, although the other elite stud options could keep Scherzer’s ownership down.

Those stud options will likely be Chris Archer and Robbie Ray, who have stellar matchups against the Padres and White Sox. Archer faces a White Sox team that has comical splits versus righties and lefties: They’re first in the league in wOBA against the latter, but they’re 28th with a .294 mark against righties. Archer is coming off a slightly disappointing outing, but it was on the road against the Rangers; today’s matchup should be much easier, as indicated by the White Sox’s low 3.3-run implied total. Archer has the best Park Factor (85) among pitchers today, and his Statcast data is encouraging: Over his last two games, he’s allowed a fly ball rate of just 26 percent. And, oh yeah, he has a nice 8.1 K Prediction as well.

Ray has put together a fantastic 2017 campaign so far:

Today he gets a Padres team that ranks dead last in the league versus left-handed pitchers with a .262 team wOBA and 10th with a high 22.7 percent K rate. There have been only three pitchers this season to pitch against the Padres with similar K Predictions and opponent implied totals. Ray himself was one of those guys. They did well:

Ray owns the second-highest K Prediction of the day at 8.5, and his Statcast data is just as solid: Over his last two games, he’s allowed a batted ball distance of 196 feet, an exit velocity of 88 miles per hour, and a hard hit rate of 30 percent.

All three of these studs are strong plays and warrant high exposure in all formats; they’d be the singular chalk in most slates.

James Paxton has been good this year as well, averaging a +13.15 FanDuel Plus/Minus with a 70 percent Consistency Rating over his first seven starts. He returned last Wednesday from a month-long stint on the disabled list, and he didn’t miss a beat, allowing just three hits and no runs and striking out six Rockies across 5.1 innings. He threw only 77 pitches, but it’s reasonable to expect that number to go up from here. His Statcast data from that game is notable: He allowed a batted ball distance of 177 feet, an exit velocity of 87 miles per hour, and a hard hit rate of 15 percent. Impressively, he induced ground balls at a 76 percent clip. The biggest data point in Paxton’s favor today is his slate-high moneyline of -209 against the Twins, who are currently implied for a low 3.5 runs. Pitchers with similar Vegas data have historically been solid:

Brandon McCarthy didn’t have the best of games last outing, scoring only 12.2 DraftKings points against the Cardinals and allowing two earned runs in just four innings pitched. He went 85 pitches in that start and is reportedly dealing with a blister issue, although it’s tough to say how severe it is given that he’s starting today. His Statcast data over his last two games suggests he’s doing just fine: He’s allowed a batted ball distance of 179 feet, an exit velocity of 87 miles per hour, and a hard hit rate of 26 percent. He’s facing a Washington Nationals team that Vegas bettors are down on lately: They were implied for a slate-low 3.7 runs last night against Dodgers lefty Hyun-jin Ryu, and they’re currently implied for just 3.9 runs today despite ranking first in the league with a .348 team wOBA. McCarthy carries some risk, but he has had some strong performances this year and comes with a respectable 6.7 K Prediction. He’s relatively cheap on both sites at $7,800 on DraftKings and $8,200 on FanDuel.

Jake Arrieta: He’s been better of late, exceeding salary-based expectations on DraftKings in each of his last three starts. He has concerning recent Statcast data — he’s allowed a 238-foot batted ball distance and 92 MPH exit velocity over his last two — but the wind in Chicago is blowing in, and the Marlins are currently implied for a slate-low 3.1 runs. He’s cheaper on DraftKings, where his $9,000 salary comes with an 87 percent Bargain Rating.

Dinelson Lamet: He has an absolutely brutal matchup at Chase Field against an Arizona squad that ranks eighth this season with a .325 team wOBA. They’re implied for 5.0 runs, and this is only Lamet’s third career start. That said, he’s $6,800 on DraftKings, and he did well in his first starts:

With our Lineup Builder, it’s easy to incorporate stacks into DFS rosters. The highest-rated five-man DraftKings stack (per player ratings in the Bales Model) belongs to the Seattle Mariners:

The Mariners are currently implied for 5.1 runs — they opened at 4.8, so they’ve had positive movement already — and they face Minnesota lefty Hector Santiago, who owns the slate’s fifth-highest HR/9 mark at 1.655. A guy prone to giving up home runs with poor recent Statcast data is something to note, and Santiago qualifies: Over his last three games, he’s allowed a batted ball distance of 250 feet, an exit velocity of 92 miles per hour, and a fly ball rate of 65 percent. Nelson Cruz has a 226-foot batted ball distance over his last 11 games, and he usually smashes lefties, as evidenced by his split-adjusted .321 ISO.

There’s one factor we haven’t yet mentioned that could dominate the slate: A game at Coors Field. The Rockies and Indians lead the slate with implied totals of 5.4 and 5.7 runs. Ryan Sheppard covered the Indians in today’s MLB Pro Model Stacks, so let’s talk about the Rockies:

I’m curious as to whether the Coors game will have high ownership, since there are so many great stud pitchers and the game currently has a 59 percent chance of precipitation. If Coors ownership is lower than it usually is — and I’m guessing it will be — paying up for guys like Charlie Blackmon could pay off in GPPs. Blackmon crushes right-handed pitchers with a .425 wOBA and .310 ISO, so he has some upside against Mike Clevinger, who has allowed a batted ball distance of 222 feet, an exit velocity of 92 miles per hour, and a hard hit rate of 47 percent over his last two starts.

Also, as I highlight in this week’s FanDuel Mixup Breakdown, precipitation isn’t necessarily bad for hitters.

The Coors game also might have low ownership because there are other great hitting environments today. For example, it is supposed to be hot at 85 degrees with the wind blowing out in Arlington tonight (per the MLB Lineups page):

Michael Conforto is projected to bat leadoff for the Mets, and he has an excellent .248 ISO against righties. And he doesn’t get just any righty; he gets Dillon Gee, who owns the third-highest HR/9 mark in the slate at 1.731 along with a poor 1.448 past-year WHIP. He’s been better of late, but so has Conforto: Over the last 12 games, Conforto has averaged a batted ball distance of 219 feet, an exit velocity of 93 miles per hour, and a hard hit rate of 51 percent.

Among the top-10 players in average FanDuel points per game over the past month, only Paul Goldschmidt has experienced a salary decrease — and it’s significant at -$700. He’s been up-and-down, but his Statcast data is good: Over his last 14 games, he’s averaged a distance of 226 feet and an exit velocity of 93 miles per hour. Facing the inexperienced (though intriguing) Lamet, Goldy has been a beast at Chase Field, where he’s historically hit value nearly 50 percent of the time: