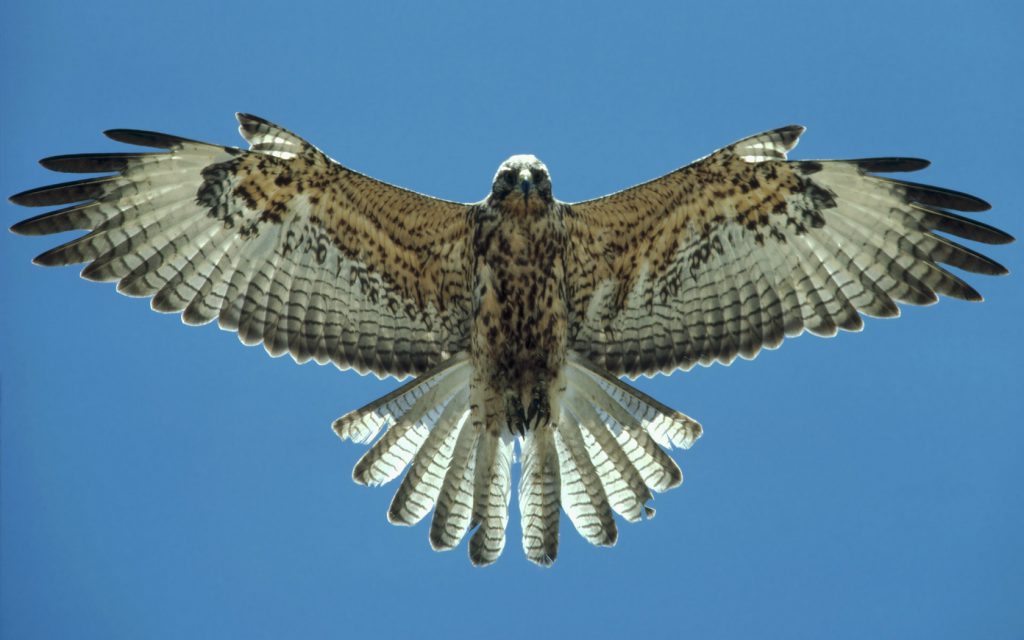 This is the 73rd installment of The Labyrinthian, a series dedicated to exploring random fields of knowledge in order to give you unordinary theoretical, philosophical, strategic, and/or often rambling guidance on daily fantasy sports. Consult the introductory piece to the series for further explanation.

I quote myself. It’s what I do. It might be masturbatory, but (to borrow from my favorite movie) at least it’s sex with someone I love.

Last week I wrote a piece detailing the ways in which even the best pitcher in the world has limited upside. In that piece I casually say this:

Every year for Christmas my mother gives me these horrible inspirational one-a-day desk calendars. I never read them — I think stuff like that is pretty useless. I take that back. They’re actually functional as bookends. (See Nassim Nicholas Taleb’s thoughts on such ‘auxiliary redundancy’ in The Black Swan.)

In the present article I want to examine Taleb’s thoughts on redundancy and explore the extent to which upside in guaranteed prize pools lies in the peripheries.

“On Robustness and Fragility”

Three years after the publication of The Black Swan — after he no longer was despised for pointing out in 2007 that the global economy was, you know, a Black Swan in waiting — Taleb added a postscript essay to the second edition of the book. He entitled it “On Robustness and Fragility, Deeper Philosophical and Empirical Reflections,” because he couldn’t think of another title that was longer or more boring.

In this addendum, Taleb notes that “Mother Natures likes redundancies” and then, after discussing a couple of larger examples — “Mother Nature does not like too much connectivity and globalization” — Taleb settles into a classic conversation on “other categories of redundancy, more complicated and subtle.”

To Taleb, these nuanced redundancies “explain how elements of nature exploit positive Black Swans . . . through tinkering or the domestication of uncertainty.” You might see where this is going.

This Section Is Basically One Huge Quotation

Here’s what Taleb has to say about what I’m terming ‘auxiliary redundancy’:

There is another redundancy: when an organ can be employed to perform a certain function that is not its current central one . . . an auxiliary offshoot of a certain adaptation leads to a new function. I can also see the adaptation as having a dormant potential function that could wake up in the right environment.

The best way to illustrate such redundancy is with an aspect of the life story of the colorful philosopher of science Paul Feyerabend. Feyerabend was permanently impotent from a war injury, yet he married four times, and was a womanizer[.] . . . This was a particular achievement given his impotence. So there were other parts of the body that came to satisfy whatever it was that made women attached to him.

Mother nature initially created the mouth to eat, perhaps to breathe, perhaps for some other function linked to the existence of the tongue. Then new functions emerged that were most probably not part of the initial plan. Some people use the mouth and tongue to kiss, or to do something more involved to which Feyerabend allegedly had recourse.

Over the past three years I became obsessed with the notion that, under epistemic limitations — some opacity concerning the future — progress (and survival) cannot take place without one of these types of redundancy. You don’t know today what may be needed tomorrow. . . . Yet anything that has a secondary use, and one you did not pay for, will present an extra opportunity should a heretofore unknown application emerge or a new environment appear. The organism with the largest number of secondary uses is the one that will gain the most from environmental randomness and epistemic opacity! . . .

I have just glanced at the desk in my business, nonliterary office (I separate the functional from the aesthetic). A laptop computer is propped up on a book, as I like to have some incline. The book is a French biography of the fiery Lou Andreas Salomé (Nietzsche’s and Freud’s friend) that I can very safely say I will never read; it was selected for its optimal thickness for the task. This makes me reflect on the foolishness of thinking that books are there to be read and could be replaced by electronic files. Think of the spate of functional redundancies provided by books. You cannot impress your neighbors with electronic files. You cannot prop up your ego with electronic files. Objects seem to have invisible but significant auxiliary functions that we are not aware of consciously, but that allow them to thrive — and on occasion, as with decorator books, the auxiliary function becomes the principal one.

So when you have a lot of functional redundancies, randomness helps on balance, but under one condition — that you can benefit from the randomness more than you can be hurt by it (an argument I call more technically convexity to uncertainty). . . .

I have given more complicated names to this idea, in addition to convexity, like optionality — since you have the option of taking the freebie from randomness — but this is still a work in progress for me. The progress coming from the second type of randomness is what I call tinkering, or bricolage, the subject of my next book.

Eventually, the idea that “you can benefit from randomness” merely by having “a lot of functional redundancies” Taleb would endow with a name that finally stuck: Antifragility.

GPP Upside Lies on the Periphery

Per FantasyLabs co-founder Jonathan Bales, an antifragile DFS philosophy is especially applicable to tournaments. In GPPs chaos is king, and as you’ve just read, Taleb sees redundancies — secondary uses, dormant potential functions, auxiliary offshoots, etc. — as the means through which organisms survive and thrive in randomness. In other words, that which was originally supplementary becomes necessary amid uncertainty. As one fantastic GPP player once said a couple of thousand years ago, “So the last shall be first.”

In DFS, the items that are secondary are generally called ‘peripherals.’ If we are to value what Taleb says about the centrality of redundancy in randomness, then it seems that GPP upside must lie on the periphery.

To win a GPP, one must roster players who have both opportunity and efficiency. While efficiency is sometimes hard to predict, opportunity (or volume) is much easier to project and is often a byproduct of versatility. As Taleb suggests, if one has several avenues through which opportunity can be accessed, one is likely to receive more opportunities in general. There should always be more than one city gate, if only to have multiple means of escape in a worst-case scenario.

Tavon Austin: An Example of Versatility and Upside

Last year, Austin had an average per-game Plus/Minus on DraftKings of +3.12. He outperformed his salary-based expectations by 36.88 percent, reached those expectations in 66.7 percent of his games, and achieved his Upside 26 percent of the time. And he did all of that despite being targeted only 87 times all season. How, then, did he finish the season with 907 yards from scrimmage, 10 all-purpose touchdowns, and a league-high four multi-touchdown games?

Per Pro Football Reference, no wide receiver rushed the ball as much in 2015 as Austin did — and it wasn’t even close:

— He had almost triple the number of rushes that the second-leading rusher at the position had.
— He easily led the NFL in yards per rushing attempt (out of all players to average at least two carries per game over the 16-game season).
— He accumulated 47.85 percent of his scrimmage yards and 40 percent of his all-purpose touchdowns as a runner. Those percentages are obscenely high for a wide receiver.
— He had exactly the same number of carries as receptions: 52. 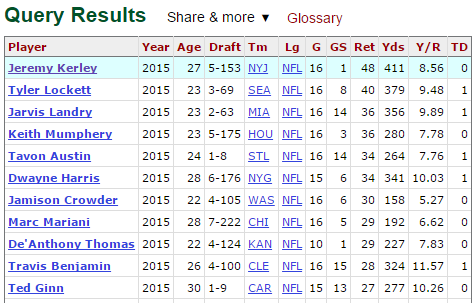 With one return touchdown and at least 30 punt returns each season of his career, Austin has scored 15.78 percent of his NFL touchdowns on special teams. That percentage is very high for a wide receiver who also has 200 targets in his first three NFL seasons.

Austin is not a good wide receiver. He received the same number of targets last season as Danny Amendola and was out-targeted by 56 other NFL players. He’s the least wide receiver-y player of any No. 1 wideout in the league. He cannot reliably perform a lot of the tasks that No. 1 receivers typically need to be able to do, like . . . run routes . . . or catch the ball.

But in circumstances of chaos — such as those created when 22 bodies collide on a football field or thousands of people compete in a GPP — unconventional methods of finding (and/or creating) opportunities provide an edge.

In Case You Forgot

Because it’s worth quoting one more time:

Yet anything that has a secondary use, and one you did not pay for, will present an extra opportunity should a heretofore unknown application emerge or a new environment appear.

It’s important that “you did not pay for” the secondary use that “will present an extra opportunity.” What made Austin so valuable last year was that his versatility was routinely undervalued on DraftKings. He was valued simply as a sh*tty receiver, not as a guy who also touched the ball outside of the passing game more than five times per contest. That’s how he was able to have a 66.7 percent Consistency.

This is the big point: It’s possible that DFS platforms routinely undervalue the secondary redundancies of players — the production on the periphery. Whether it’s stolen bases and walks in MLB, rebounds, assists, and steals in NBA, or rushing yards as a quarterback or receptions as a running back in the NFL, peripherals are important for GPPs — and they might be even more important because they are not just a means of ownership arbitrage. They are also a source of Plus/Minus value and Upside potential.

Running Backs Who Catch the Ball

This piece is about the importance of peripherals across DFS in general — but football season is almost here, so I’ll leave you with this . . .

Which is more valuable:

You probably have an idea of what the Trend tool says.

The two running backs score almost exactly the same number of points on DraftKings: 13.14 vs. 13.13. But the ‘running back’ is priced as if he should score 11.49 points per game. The ‘receiving back,’ only 10.78. As you might expect given these numbers, the receiving back also has the superior Consistency.

Almost a hundred years ago, another GPP player once wrote:

On the periphery of GPPs is where resides the Second Coming.