The NFL DFS prime time slates have only two games but massive guaranteed prize pools. Also, they’re just plain fun. This week, here are the games offered in the slate:

That snippet is from our free NFL Vegas dashboard and is current as of Saturday night. Keep tabs on the dashboard for updates on the lines.

This is an interesting slate for QBs: Russell Wilson dominates almost all of the long-term metrics in our Player Models because of his stellar 2015-2016 season, but Brady dominates all of the recent metrics and is likely the NFL MVP frontrunner this year. Brady has been nothing short of amazing since his return in Week 5, throwing for 12 touchdowns and zero interceptions in the past four games. The only game in which he failed to have a positive Plus/Minus was a couple weeks ago against the Steelers, but it was only because of a slow pace. He completed 19 of his 26 passes for 222 yards and two touchdowns. He will cost a premium on this slate at $7,400 DK and $8,300 FD, but he has access to a ceiling that none of the other three QBs can currently boast. He faces a Seattle defense that ranks sixth overall this season, but (as Editor-in-Chief Matthew Freedman noted in his QB Breakdown this week) bad matchups haven’t historically been an issue for Tom.

Although Andy Dalton has the highest Opponent Plus/Minus over the past year — the Giants were very poor against QBs last season and thus still have a very-positive +2.2 Opponent Plus/Minus over the past year — the Bengals have actually been the worst team against QBs this season among matchups in this slate. Per our Trends tool, they’ve allowed QBs to score 3.3 DK points above salary-based expectations in their eight games. Of note, they gave up 32 DK points to Trevor Siemian, which seems bad. Football Outsiders’ Defense-Adjusted Value Over Average (DVOA) agrees: The Bengals own the 24th-ranked pass defense in the league. Eli might be the worst real-life QB out of this foursome, but he could definitely be the best DFS asset this weekend.

Per this week’s Market Share Report, Blount trails only Melvin Gordon among all players in opportunities inside the 10-yard line over the past four games. This week isn’t a great matchup: He’ll face a Seattle team that ranks third overall and against the run this year. However, Blount has dominated the Patriots’ rushes over the past four games — he boasts a 66.4 percent market share of carries — and is definitely the preferred goal-line option. Despite this tough matchup on paper, the Patriots are actually implied to score a whopping 28.25 points at home. If my math is correct, that means that there might be some touchdowns scored. And if they’re scored around the goal-line, there’s a solid chance that it’ll be Blount with the ball.

It’s been a little difficult to guess which Bengals RB you should own this year, as shown by this past-month graphic: 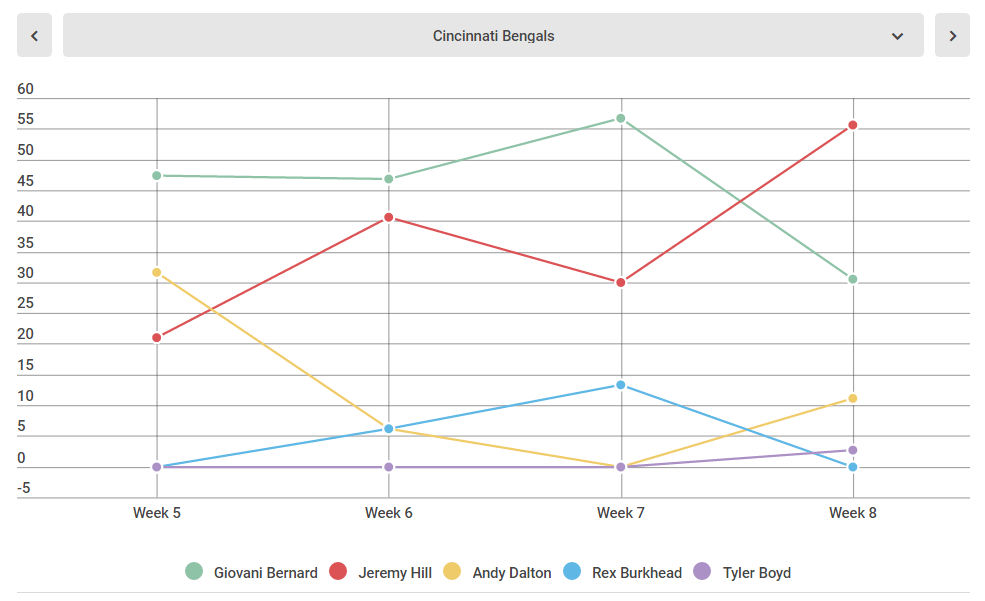 Hill’s market share of rushes has been all over the place: He’s gotten 55.6, 30.0, 40.6, and 21.1 percent of the Bengals’ carries over the past month. He’s definitely more game-flow dependent than Giovani Bernard, but he did see 20 carries last week and this week is a one-point favorite over a Giants team that ranks 13th defensively against the run. There’s definitely some risk here, but this isn’t an especially stout RB slate, and Hill has shown (by his success rate) that he’s capable of putting together a big game if given the opportunities.

Green is the highest-rated FD WR in the Bales Model for the slate and sits $300 less than Odell Beckham, who should be massively owned in this slate against a Bengals defense that ranks 24th versus the pass this year. And it’s not that Green will be a low-owned gem, but he should be a little less popular, and he actually owns just as juicy of a WR/CB matchup as Odell: Per our Matchups tool, he’ll line up opposite Eli Apple, who is Pro Football Focus’ 99th-ranked cornerback with a 47.6 coverage grade. For reference, Beckham will face Adam Jones, who is PFF’s 98th-ranked CB with a 48.9 coverage grade. These are both elite matchups, yet Green likely has a little more ownership upside.

The Seahawks are great defensively and great against the pass, ranking third and sixth, respectively. However, they are susceptible in the middle of the field: Per DVOA, they’re 22nd in production allowed to receivers in that area. Danny Amendola will start in the slot, and other players like Rob Gronkowski and James White will see targets in that area. However, don’t forget about Edelman: He has seen 53 percent of his targets in the middle of the field this year and boasts a stellar 80 percent success rate on those. He hasn’t had a huge game yet this year, but the volume has been there: He’s seen at least seven targets in every game with Brady back and should be in line for close to double-digits again this week.

It might be best just to eat some chalk this week and load up on Gronk. Since Brady’s return, he’s been dominant: He’s scored at least 18.9 FD points in every game and has yardage totals of 109, 93, 162, and 109 in his past four games. In that same time frame, he’s been Brady’s most important receiver: He has 20 percent of the Patriot’s targets but a whopping team-high 33.0 percent of their Air Yards. He has scored a touchdown in each of his last three games and faces a Seattle team that has struggled against TEs this year, ranking 23rd against the position in pass DVOA. It’s very scary to fade Gronk this weekend on a small slate.

That said, if you ever wanted to fade Gronk and use a leverage play, man, it’s nice to have Jimmy in this slate. He leads all TEs in the NFL with 25.2 percent of his team’s targets over the past four games. Further, he owns 24.8 percent of the Seahawks’ Air Yards in that same time frame. He hasn’t been Gronk-level this year, but he was pretty close last week against the Bills, scoring 33.3 DK points on a stellar 8-103-2 line. The Patriots are notorious for taking away a team’s top option — especially if they have extra time to prepare — so there’s definitely more risk in this matchup, but the Patriots are 24th against in TEs in pass DVOA this year. If Graham outscores Gronk and you have him in prime time GPPs, you’ll be in a very nice spot to profit.

Super Bowl FanDuel Breakdown: Gronk Is in Position to Smash