After getting a big-slate taste of the NFL preseason on Thursday, we have another modest two-game offering that kicks off Saturday at 9:00 p.m. ET. With just four teams playing, the pickings are slim. As has been the case all week, we’ll probably want to target second- and third-stringers, since established veterans rarely play more than a couple of series in Week 1 of the preseason.

If you haven’t played preseason daily fantasy before, check out preseason sharp Sean Newsham’s five DFS guidelines for dominating the NFL preseason as well as the recent episode of “The Daily Fantasy Flex” in which he and FantasyLabs Editor-in-Chief Matthew Freedman break down the secrets of the preseason schedule.

For more preseason guidance, see our industry-leading Models, which contain preseason player projections for subscribers. If you’re a redraft player or sports bettor, check out our FREE standard and point-per-reception rankings as well as our favorite Week 1 NFL preseason picks.

Be sure to keep an eye out for late-breaking news on player availability before lineups lock.

Josh Rosen (Cardinals): Rosen has been groomed as an elite quarterback his whole life, graduating high school as one of the top quarterback recruits in the country before compiling three solid seasons as a starter at UCLA. The draft’s most pro-ready quarterback combines a live arm with poise in the pocket. While the No. 10 pick lacks mobility and faces durability questions, attitude concerns seemingly drove down Rosen’s draft stock more than a lack of on-field ability. Sam Bradford is expected to draw the start, but head coach Steve Wilks noted, “We want him (Rosen) to play quite a bit and get into the flow of the game.” Rosen has the position’s highest median projections in our Models. 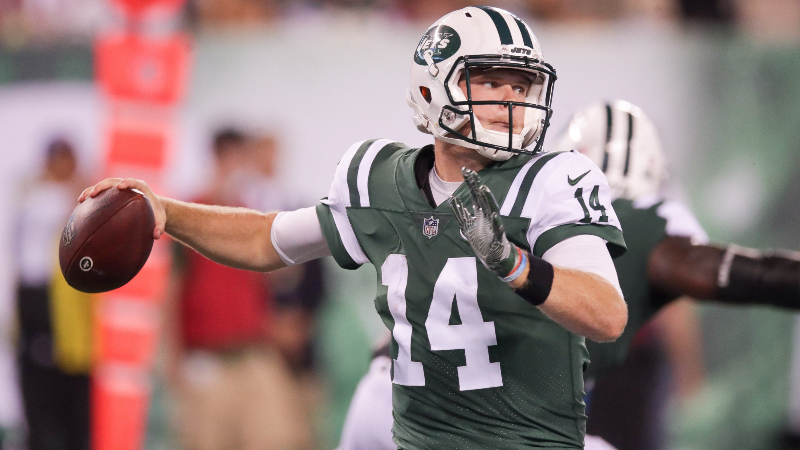 Royce Freeman (Broncos): Freeman joins Leonard Fournette and Le’Veon Bell as the only top-100 picks to weigh at least 230 pounds and have at least 250 yards receiving in a college campaign. Considering offensive coordinator Bill Musgrave’s lead running back has averaged 240.3 fantasy points per season (No. 8 in 2017), the Broncos’ backfield battle is important. Devontae Booker is listed as the starter on the team’s unofficial depth chart, so Freeman could get more run as the backup in this game. Freeman is arguably fantasy’s No. 2 rookie back behind Saquon Barkley following Derrius Guice‘s season-ending ACL tear.

Chase Edmonds (Cardinals): Wilks has already indicated that David Johnson will play minimal snaps this preseason, which is great news for Edmonds, who is perhaps the 2018 version of Tarik Cohen — a smallish big-time producer from a small school. Edmonds possesses a three-down skill set with elite per-game collegiate production to complement above-average athleticism. He could lose snaps to second-year fifth-rounder T.J. Logan as well as incumbent backup D.J. Foster, but a strong showing in training camp has already elevated Edmonds to the No. 2 spot on the depth chart.

Brice Butler and Christian Kirk (Cardinals): Arizona’s unofficial depth chart lists Butler as the No. 2 receiver behind Larry Fitzgerald, but the team’s versatile second-round pick has routinely earned first-team reps as well. Butler is big (6-feet-3) with field-stretching ability, and he ranked 11th among wide receivers with 2.14 yards per route run in 2017 (min. 20 targets). Kirk mainly worked in the slot at Texas A&M, but he offers home-run ability as a receiver, runner and returner. Second-year third-rounder Chad Williams (knee) should be considered questionable.

Mike Williams (Chargers): Hunter Henry (knee) and Antonio Gates (unsigned) over the past two years saw 17 red-zone targets apiece with the Chargers. At present, there isn’t a better replacement on the roster to serve as quarterback Philip Rivers‘ featured end-zone threat than Williams, who used his size (6-feet-4, 2018 pounds) to make contested catches as Watson’s No. 1 receiver at Clemson. A back injury robbed him of nearly his entire rookie season, but his first-year inexperience might encourage the Chargers to give him more playing time tonight, since the No. 3 wide receiver job will likely come down to him or Travis Benjamin.

🗣️Mike Williams is about to eat in the red zone pic.twitter.com/igf0pOkexI

David Morgan (Vikings): Starter Kyle Ruldoph likely won’t see more than a couple drives, setting the stage for his backup to get some run with Kirk Cousins and/or Trevor Siemian (#RevengeGame). While he was often utilized as a blocker in 2017, Morgan is a legit receiving threat with good size (6-feet-4, 262 pounds) and athleticism (86th-percentile SPARQ score). The Broncos defense last year ranked among the league’s bottom-three units in Football Outsiders’ Defense-Adjusted Value Over Average vs. tight ends and in DraftKings points per game allowed to the position. Among tight ends, Morgan has top-two median projections in our Models.

Denver: The Broncos face a Vikings offensive line without right guard Mike Remmers (ankle), left guard Nick Easton (neck, IR) and center Pat Elflein (shoulder, ankle). They likely wouldn’t have played more than a couple of series anyway, but targeting the league’s most injured offensive line in the slate’s lowest-total game (per our Live NFL Odds Page) might be the way to go with so much unknown in the preseason.

NFL Week 2 Fantasy TE Breakdown: Is Jared Cook in Play vs. the Broncos?